Jordan Henderson’s injury was a blow for Liverpool but it resulted in an unexpected opportunity. Jürgen Klopp doesn’t rotate much and it usually takes an injury for the German to give someone a run of games in his Premier League starting XI.

James Milner’s knock prior to the win over West Ham United turned what was a slightly ajar door into open-plan living. This was a chance for one of Naby Keïta or Alex Oxlade-Chamberlain to reshape the requirements, redesign the role and reclaim a role in the middle third.

Surprisingly, it was the former who got the nod against the Hammers.

After an impressive showing against Norwich City in the Reds' last Premier League outing, Keïta kept his place in the starting XI despite the general feeling in the build-up being that Oxlade-Chamberlain would displace Liverpool's No.8.

He started off brightly and had a hand in the opening goal. He exchanged passes with Mohamed Salah and Roberto Firmino before bursting into the penalty area. West Ham scrambled the ball away but only as far as Trent Alexander-Arnold, and his cross was nodded home by Gini Wijnaldum.

Heading into the break at 1-1, the feeling was Liverpool had struggled.Keïta took the brunt of the criticism despite the stats suggesting he was arguably one of Liverpool's better performers. Klopp’s decision to make a change after only 57 minutes strengthened the argument that the former RB Leipzig man was having a game to forget.

Oxlade-Chamberlain’s introduction seemed to spark the Reds into life. Just a little over ten minutes after his arrival, Salah fired home an equaliser following good work from Andrew Robertson down the left. Then, after what seemed like a relentless red wave, Sadio Mané scored what turned out to be the winner.

Following the match, talk turned to who should start in midfield against Watford. The majority felt as though the Ox had done enough during the 38 minutes he spent on the pitch on Monday night to force Keïta onto the bench for the trip to Vicarage Road.

But it isn’t as simple as that. It isn't an either/or situation, either. The fact Liverpool have the two midfielders at their disposal gives them a number of options. That was the case at Anfield against West Ham, too. It just didn't seem like that at the time. 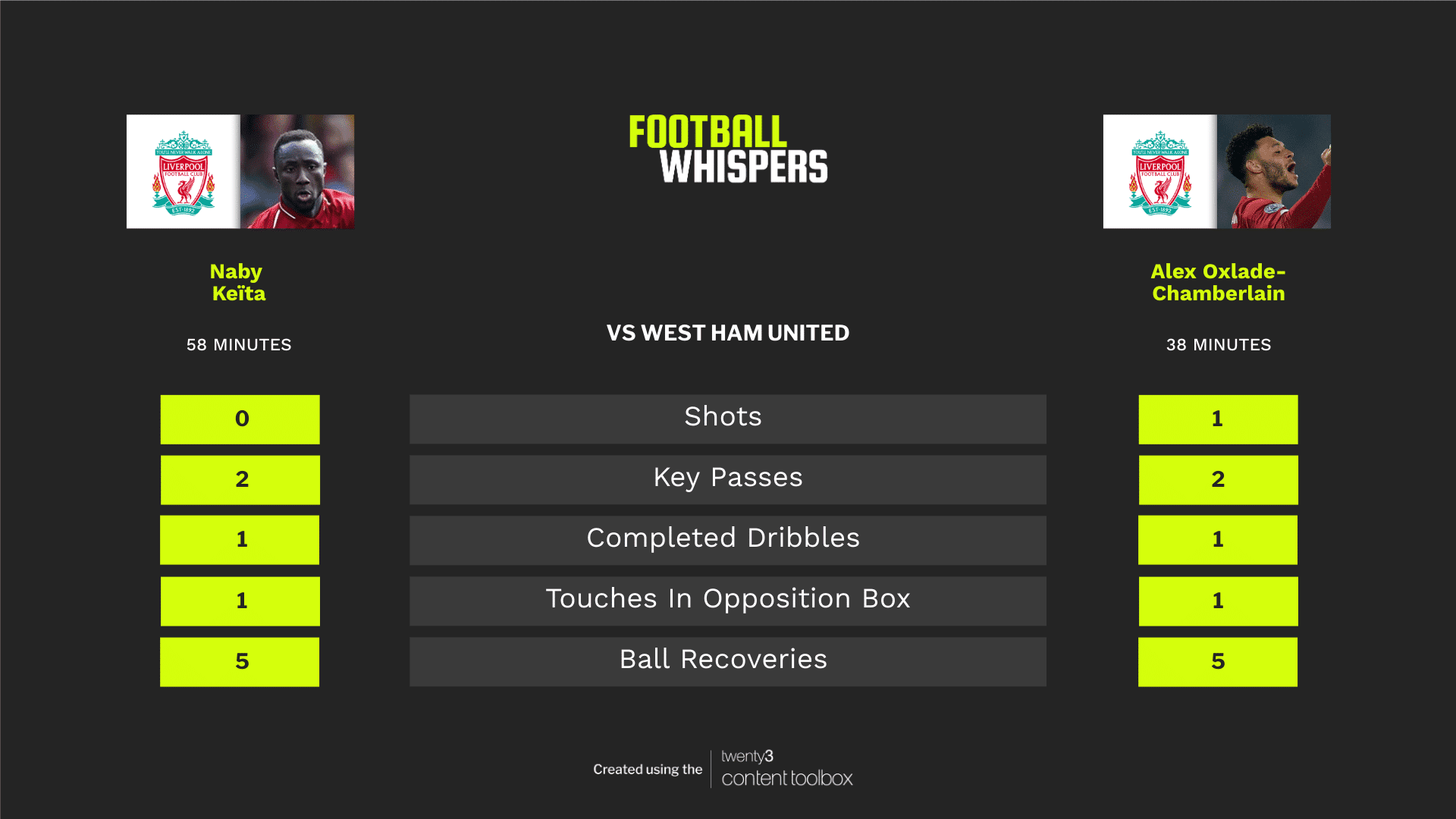 However, there's no point looking at them as individuals. It's a team game and the state of play needs to be factored in.

When Keïta was on the pitch, Liverpool controlled the game in terms of possession. They averaged 71 per cent for the 58 minutes he was involved in and this dropped to 66 per cent when Oxlade-Chamberlain replaced him.

At first glance, the Reds appeared to be more dominant after the former Arsenal man was brought on.

But his introduction coincided with West Ham going 2-1 up just moments after losing Tomáš Souček. The Hammers' January signing had won 50 per cent of his tackles, made seven clearances and two interceptions before having to go off injured. Pablo Fornals replaced him and though he doesn't shy away from defensive work, he's nowhere near as diligent as the former Slavia Prague midfielder.

David Moyes' side had the lead but they'd lost a physical presence in the middle third. This aided Liverpool and the upping of the tempo after going a goal behind. It was the perfect storm for the hosts and in these frenetic moments, Oxlade-Chamberlain thrives.

Following his arrival, the Reds had 11 of their 25 shots, or 44 per cent. But most of the threat came via set pieces with Liverpool struggling to create much in open play. In fact, the league leaders had ten of their 16 corners after the 58th minute. Klopp's team showed patience to pin West Ham back in their pursuit of a winner but ultimately the game plan was to get the ball forward as quickly as possible, and this suited the England international more than it did Keïta.

There was an urgency to their game.

In the first half, this wasn't the case. West Ham pressed high, they looked to disrupt Liverpool and Keïta's use of the ball, along with his press resistance, lent itself to that style. It's been overlooked but the Reds created more in open-play in the first 45 minutes.

After all, Oxlade-Chamberlain can, at times, be too loose in possession. It's a criticism often levelled at Keïta but he did finish the match with a 90 per cent pass success rate and he put on a passing clinic in the Champions League game against Genk earlier on in the season.

The win over the Hammers highlighted the need for different skillsets because there's no one-size-fits-all midfield. Keïta may not have grabbed the game by the scruff of the neck against West Ham but he could still start against Watford if Liverpool feel he'd be better suited.

The biggest takeaway from their 18th consecutive win was that the Premier League leaders need both players.