Gegenpressing. That was the buzzword surrounding Jürgen Klopp's appointment as Liverpool manager almost two years ago. His Borussia Dortmund team were famed for their ferocious high press. If they lost the ball in the final third for the six seconds that followed they were relentless.

They'd hound the opposition so one of two things would eventually happen; there would be a turnover in possession in the attacking third or they would force the opposition to go long and win the ball back in the defensive third.

They'd suffocate the opposition by dominating the space. Dortmund wouldn't just hunt in packs, they'd so so as a team. The defence would push up to support the press to ensure there weren't ever any huge areas of space for teams to exploit. It was very much a united team effort.

Klopp's first game in charge of the Merseyside club was away to Tottenham Hotspur. A well-drilled and well-organised Mauricio Pochettino Spurs side would be a stern test for the new Reds manager.

But, to the surprise of many having had limited time with his team due to the International break, Liverpool bullied the home side.

They pressed high and harassed the Spurs backline but this wasn't just a team of headless chickens causing as much disruption as possible. Liverpool had structure to their pressing game. They weren't always looking to press in the final third and at times would stand off certain players. 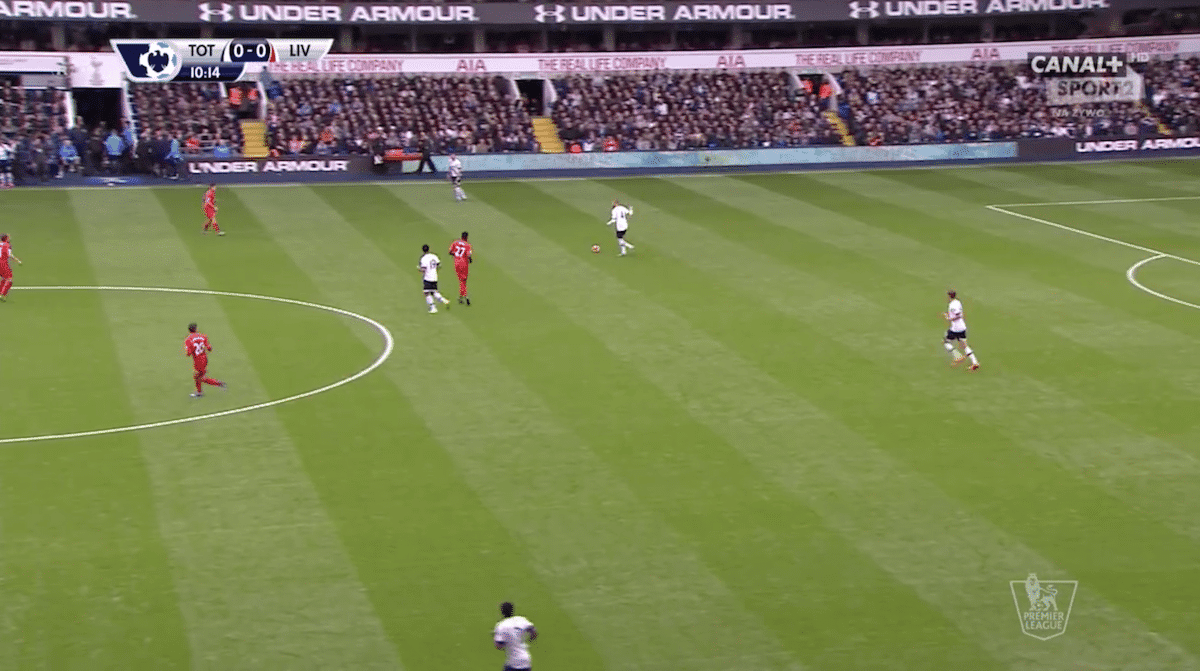 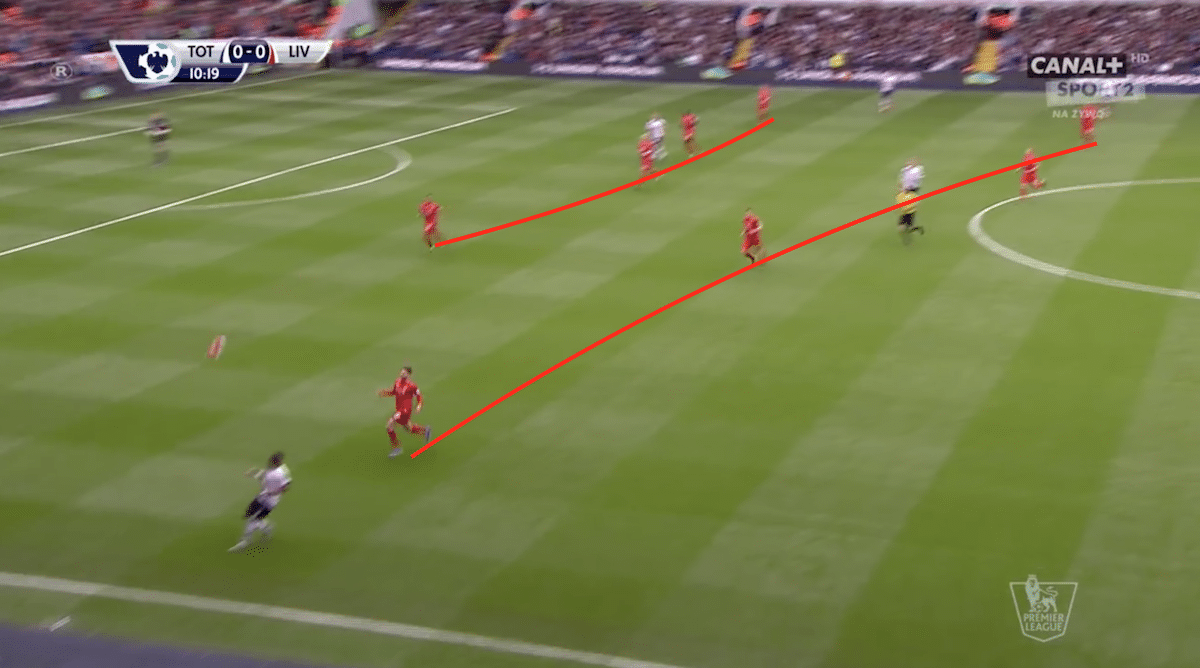 In the above pictures you see the ‘half press'. Liverpool allow the Spurs defence to have the ball under very little pressure. Toby Alderweireld picks up the ball and looks to play a switch to Danny Rose down the Tottenham left. Unfortunately for the home side, the ball is over hit. But even if it was weighted to perfection, look a the defensive lines in the second picture.

There's no space between the lines and Rose is fairly isolated. If Liverpool win the ball back they have superior numbers and can get back onto the attack under very little pressure, building as a team.

It showed to those unfamiliar with Klopp's tactics that it wasn't all just about running a lot. It was methodically thought out and planned.

The Liverpool manager had his side well drilled with the defensive line taking their position from the furthest forward player. Klopp had Liverpool in a compact shape, with 30-yards being the distance between the centre-back and the centre-forward.

Liverpool continued to play this style throughout Klopp's debut season on Merseyside. However, during the 2016/17 season it was tweaked. It was less organised chaos and instead was a more measured approach on the ball. The Reds wanted to dominate the ball instead of the space. The theory behind it being the best form of defence is to have possession.

Liverpool still pressed and their play still had the intensity you would associate with a Klopp team when looking to regain possession. But it was my no means as relentless as the 2015/16 season.

In a piece for StatsBomb, Will Gürpınar-Morgan looked at pass completion disruption during the 2016/17 season. It's well worth your time and it does into great detail on where teams press the ball successful and where they don't. 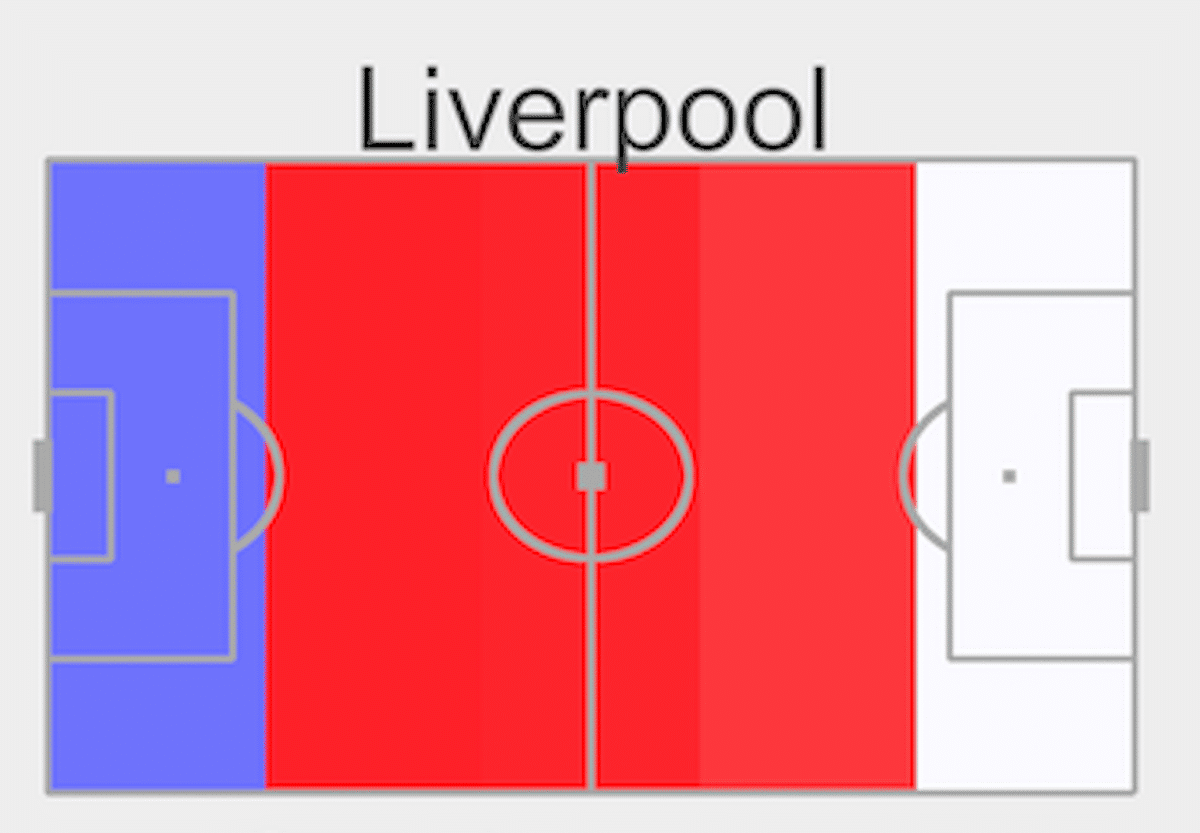 What he found was that Liverpool press very hard and high, but once you break through their midfield, it's relatively easy to complete passes around their box. Spurs, Chelsea and both Manchester clubs defend their penalty area well.

Over recent weeks it's becoming more and more evident that Liverpool aren't as structured or organised this season with their pressing or their positioning. Burnley and Newcastle United exploited this to score relatively straightforward goals, and Manchester City's opener at the Etihad showed the defenders aren't on the same page.

Bobby Gardiner, a data scientist for Football Whispers, has analysed Liverpool's pressing intensity so far this season: “We can get a rough proxy for pressing intensity through looking at how many successful open play passes a team allows versus how many defensive actions they make. The metric, PPDA, was created by Colin Trainor of StatsBomb.

“So far this season, Liverpool are allowing 43 per cent more passes per defensive action on a game-by-game average than they did last season. This suggests that they may be ‘sitting back' more, although this may be a short-run effect that balances out over the season. This tactic may work against certain teams, e.g. Arsenal, who Liverpool beat 4-0 while allowing twice as many passes per defensive action, but back-fire against more direct teams like Burnley, who they drew 1-1 with while pressing similarly lackadaisically.”

It's clear that it's Klopp's decision to have the team press from deeper areas but it's what is happening behind the initial press that's the issue. 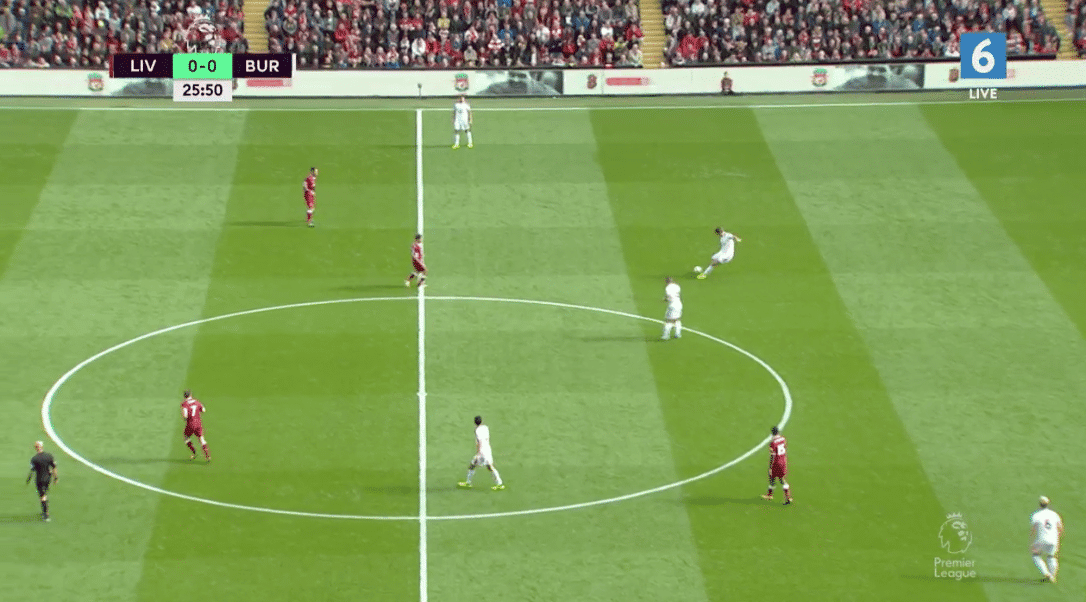 Here you see how Liverpool shape up against Burnley when their centre-backs are in possession. It appears, on first glance, to be sterile. With the away side just playing the ball around under little to no pressure.

But then James Tarkowski lines up a long diagonal, looking to get Robbie Brady in against Trent Alexander-Arnold. It's an obvious tactic; Burnley are powerful in the air and are fairly dominant when picking up the second balls. He's in a prime pressing area yet Liverpool stand off of him.

With the Reds not pressing high they should have men in good defensive positions. 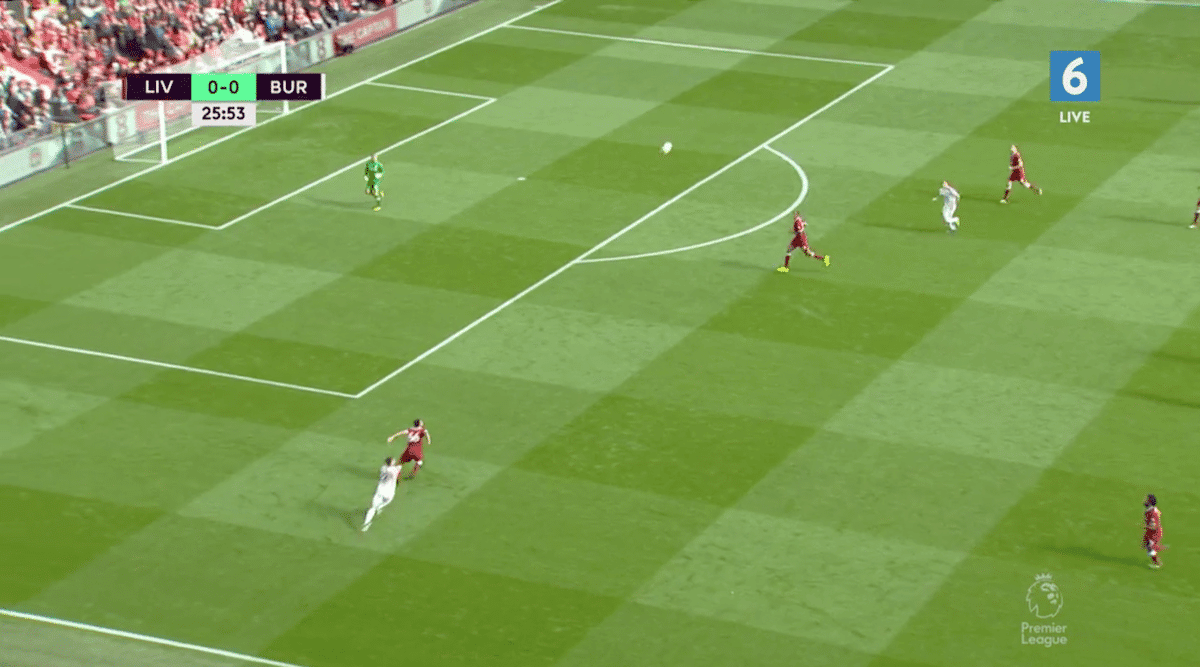 But, as you can see in the above picture, Liverpool are from from compact. Alexander-Arnold is isolated against Brady, who has a running jump on him, and no Liverpool player is within close distance of the pair. The Burnley man wins the header and Chris Wood flicks it on to Scott Arfield who fires home.

But compare that the Liverpool shape against Tottenham and it's completely different despite the fact they were using a similar sort of press. It happened against Newcastle, too.

Not when they scored to cancel out Philippe Coutinho's strike. But continuously throughout the game. 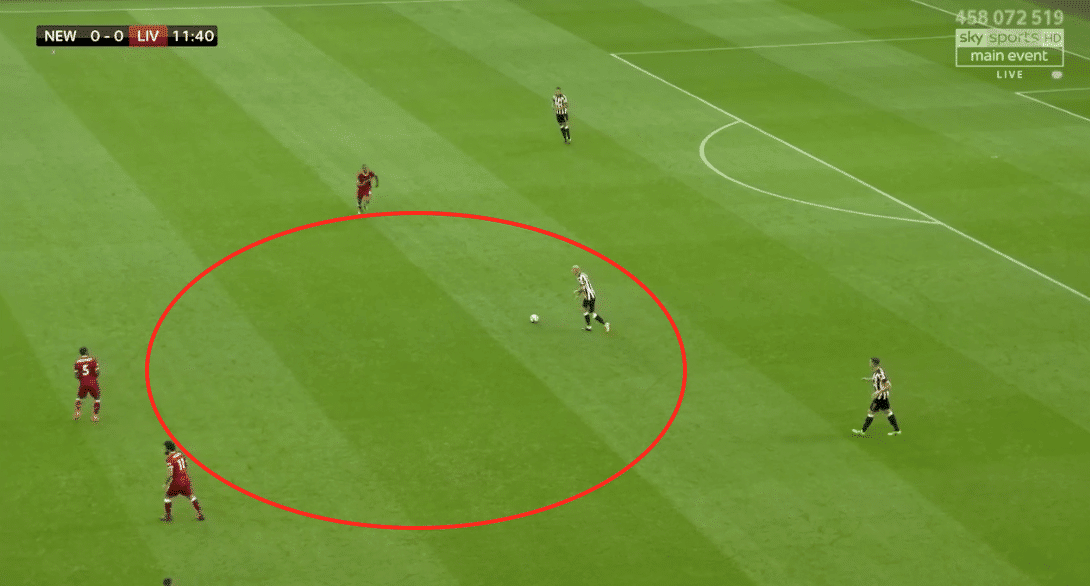 Newcastle play around a half-hearted attempt of a press in their own half and retain the ball. It's easy for the home side and they manage to work the above scenario. Jonjo Shelvey in acres of space in his own half. You would assume that given there's no high press that Liverpool would be compact and organised in their own half meaning any long ball is easily dealt with. 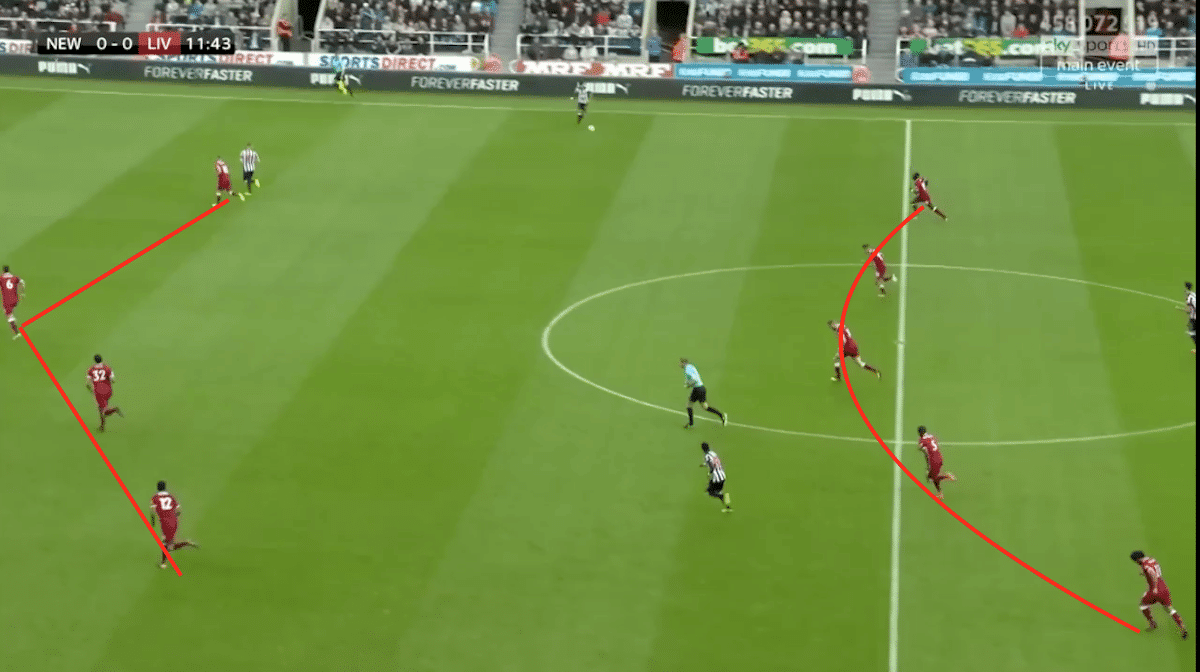 But no. Shelvey picks out a pass on the Newcastle right and you see, in all it's glory, just how bad the Liverpool set-up was. It may not look dangerous but one pass has bypassed the entire midfielder and three Newcastle United players are up against four Liverpool defenders. One pass.

That's all it took to stretch Klopp's team.

Liverpool may be sitting a little deeper by design with it giving the team more of an opportunity to hit the opposition on the break and make the most of the pace they now have in their attack.

As Bobby mentions it may be a tactic to invite pressure on from the opposition, but to execute it properly you need everybody on the same page and the team needs to be as compact as possible to soak up this pressure and turn the ball over.

However, as sound as this seems in theory it's not happening on the pitch. You can see this in the two examples from the matches against Burnley and Newcastle.

Will Klopp persist or will he admit defeat in this experiment, realising it's not a one size fits all tactic, and start looking at different things he can do to stop the issues Liverpool are regularly facing.