Heading into the Merseyside derby, a sighting of Xherdan Shaqiri in a Liverpool shirt was something fans would tell their kids about. Bigfoot, little Shaq and the Loch Ness Monster: all mythical creatures.

The Liverpool No.23 had just 11 minutes of Premier League football to his name this season. Injuries have played a part but there was also a general feeling that Jürgen Klopp didn’t trust Shaqiri.

The 28-year-old influenced matches for the Reds this time last year, scoring twice after coming off the bench in the win over Manchester United. In fact, from October onwards, Shaqiri was one of Liverpool’s most influential attackers.

He netted against Cardiff City, Fulham, Burnley and Newcastle United to go with his double against the Red Devils all while chipping in with an assist against Huddersfield Town. The former Stoke City man had seven goal involvements in 11 appearances heading into the New Year.

Shaqiri was used sparingly in January, starting games against Brighton and Leicester while also coming off the bench against West Ham and Crystal Palace. After that, however, he featured for just 42 minutes in the top flight. Post-January, his only start came in the semi-final of the Champions League.

With Roberto Firmino and Mohamed Salah ruled out, Klopp was forced to turn to the Swiss bulldozer and Divock Origi. Both played their part in one of the greatest comebacks ever, with Shaqiri assisting Gini Wijnaldum’s second. But while the Belgian used the momentum gained to force his way into the first-team picture, Shaqiri remained stuck on the periphery.

During the summer, reports linked him with a move to China. Monaco were believed to be keen on the left-footed maestro, too. And ahead of the match against Everton, it was Galatasaray interested in the former Bayern Munich winger.

But then that derby happened. 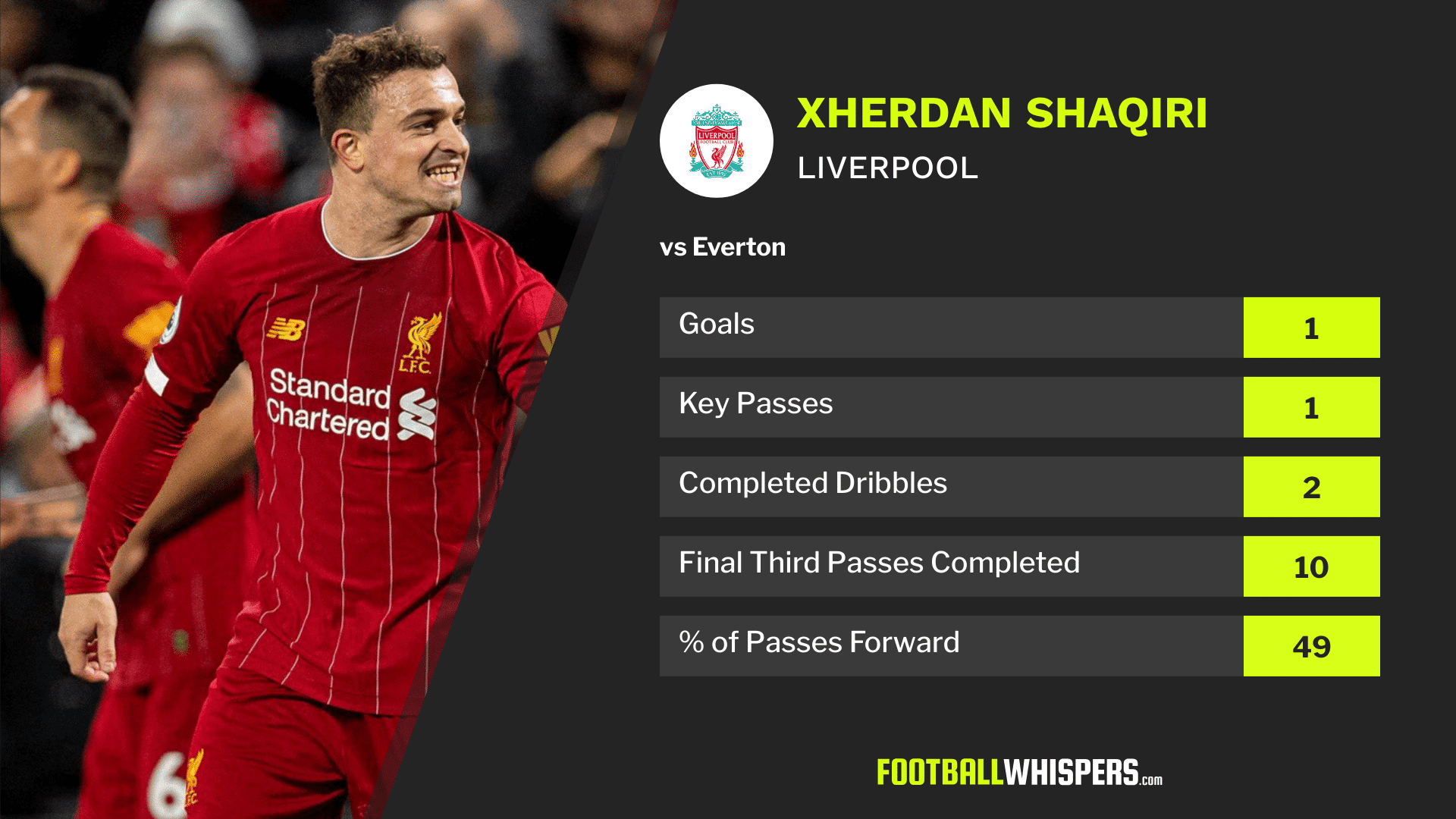 One game won't make or break a career, but Shaqiri's performance against Everton gives Klopp something to think about. He looked noticeably slimmer and positionally the Liverpool No.23 appeared much more switched on. It was a frantic opening 45 minutes and the Reds rarely controlled proceedings in the middle third. But it was clear that wasn't ever the plan.

With the Premier League leaders eager to get the ball forward as quickly as possible, usually to the left side of the pitch to Sadio Mané, the task for the supporting cast was to follow play up. Shaqiri was there to help Liverpool pen Everton in, and then to stretch the game.

His goal, the second of the night, was picture perfect. Trent Alexander-Arnold pinged a pass to Mané who carried possession forward. Centrally, Origi and Adam Lallana occupied the three Everton centre-backs and this allowed Shaqiri to drift inside from the right and dart into the penalty area.

He then calmly finished and in the blink of an eye, Liverpool had doubled their lead.

It felt like a goal Salah would score. The clever movement and intelligent positioning ensured Shaqiri had an almost free run into the area and he then finished instinctively.

Liverpool have a variety of players capable of playing in their forward line but Shaqiri is the only other left-footed attacker aside from Salah. While it isn't imperative to have a lefty in the final third, it's a nice option to have.

He was at his inventive best against Everton, too. He was forever popping up between the lines and looking to thread passes into team-mates. Shaqiri completed ten of the 13 final third passes he attempted on the night. The 28-year-old, despite playing in an advanced position, also played close to 50 per cent of his passes forward.

The Basel academy graduate isn't as prolific as Salah, but very few are. He does, however, offer similar levels of creativity. With a gluttony of games on the horizon, Salah, who has been carrying a knock for close to two months, will need to be rested and Shaqiri is someone who ticks more boxes than most as a potential replacement for the Liverpool No.11.

It did seem Shaqiri's career at Anfield was coming to an end. That still might be the case if Liverpool decide to make moves in January, as suggested by parts of the media.

But his showing against Everton was a timely reminder that he can play a significant part in the club's quest to claim the Premier League title.