Liverpool aren’t shy about their love of a good bargain. They regularly raid relegated clubs while rival teams are spending absurd sums on players from foreign leagues.

According to The Athletic, Todd Cantwell could be the next player on their bargain buys list. David Ornstein claims the Reds have ‘intensified' their interest in the 21-year-old and are now considered front-runners to land the Norwich City starlet despite, interest from both Manchester clubs and Tottenham Hotspur.

The report goes on to suggest Cantwell impressed the Merseysiders in both matches against them this season and the Canaries' £30million valuation isn’t a deterrent.

Very few envisaged the fleet-footed playmaker having the impact he’s had this term. For a youngster with relatively little experience – he made just 24 appearances in the Championship last term – Norwich's No.14 found his feet in the English top-flight with relative ease.

Chris Sutton called him the ‘the Dereham Deco’ and though it was a throwaway comment, Cantwell could develop into a key cog for a top team.

Technically sound, he’s got a composure on the ball not historically associated with English players. Confident on both feet, he effortlessly dances his way out of tricky situations. In both matches against Liverpool, he slalomed his way past Trent Alexander-Arnold on multiple occasions. Cantwell is press-resistant, too, an invaluable trait in the modern game. 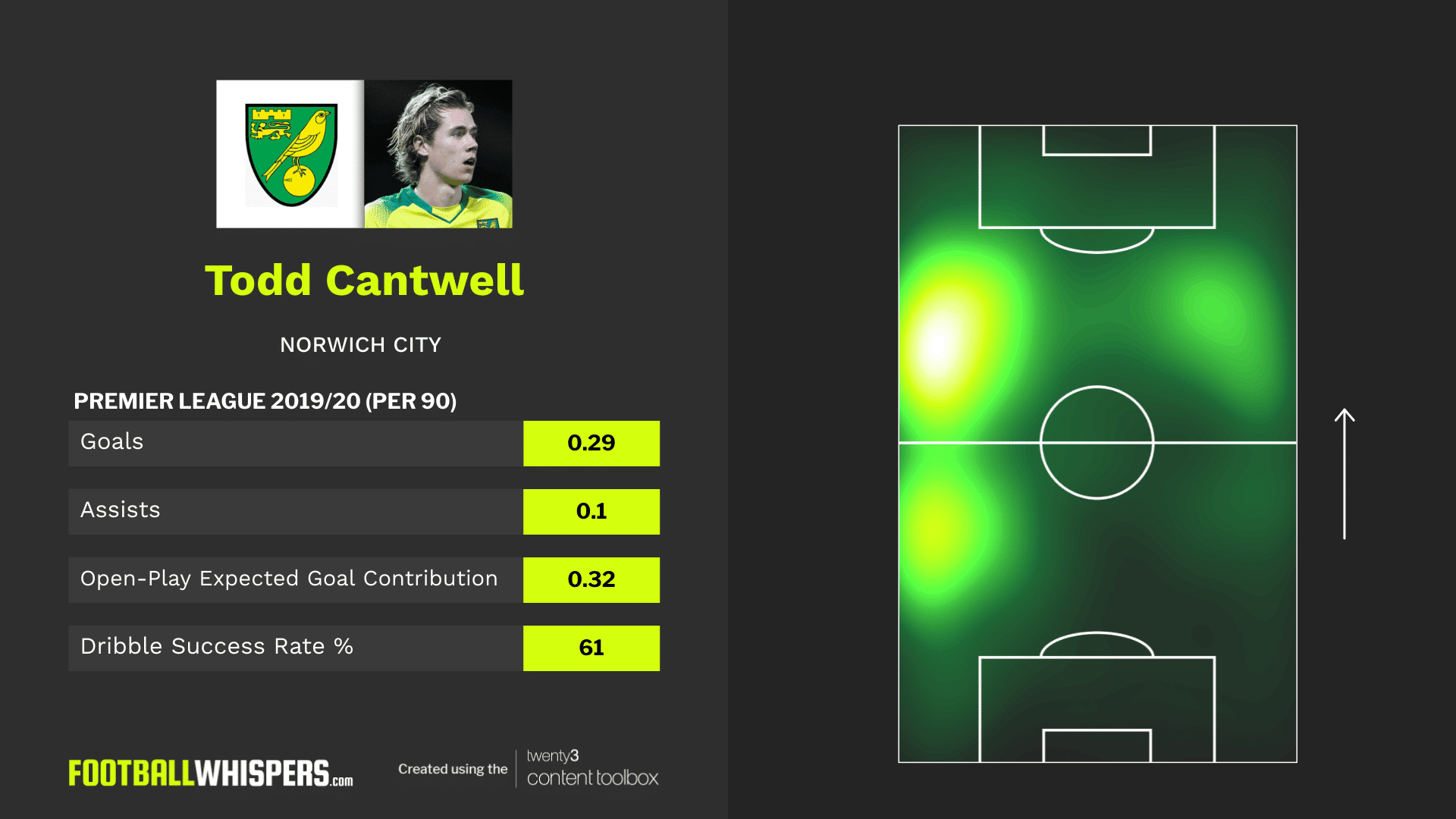 He’s not as experienced as another rumoured Liverpool transfer target, James Maddison, but he could jump ahead of his former Norwich team-mate as the most-wanted attacker outside of the traditional top six.

Maddison is a not an archetype modern-day attacker. The Foxes No.10 lacks explosive pace, he isn't a consistent goal threat, peppering the goal from distance, and doesn't appear to be trusted to play in a midfield three. He is too specialist for this era of versatility.

For context, Maddison and Cantwell have both scored six times this season. Yet the latter has taken 21 fewer shots. Top teams want sustainability in the final third, not unpredictability.

Despite the small sample size, Cantwell appears to have a skill set which is transferable. Deployed on the left of the Norwich attack, he’s adept at dropping into midfield and carrying out the defensive side of the game. But he’s switched-on enough to know he’s got to support Teemu Pukki in the final third. He blends the different sides of the game effortlessly, something very few players are able to do. 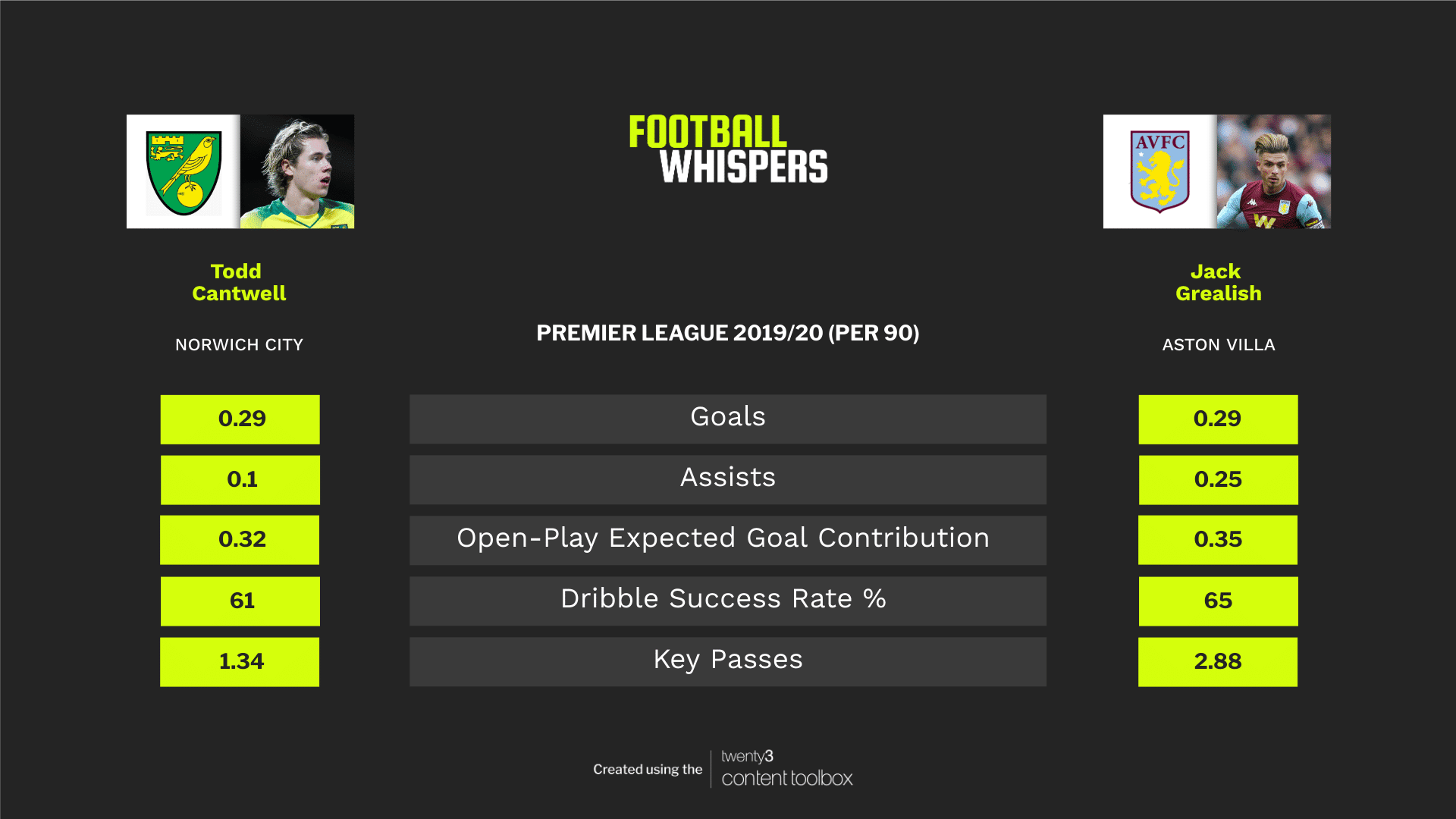 He might not be as prolific as any of Liverpool attackers, but Cantwell is turning out for a team currently rooted to the bottom of the table. However, his underlying numbers are intriguing. His open-play post-shot expected goals average is 0.28 (per 90), double Maddison's average and 0.06 ahead of £80million-rated Jack Grealish this term.

In the two seasons prior to signing for the Reds, Mohamed Salah and Sadio Mané had an open-play post-shot expected goals per 90 average of 0.41 and 0.39 respectively. While Cantwell might not be in their league, there is enough for Jürgen Klopp to work with. Furthermore, his averages should improve when playing in a better team.

The Norwich man looks like even better value for money when compared to Grealish. In terms of expected goal contribution, they are almost level – though the majority of the Villa star's total is made up of expected assists whereas Cantwell is more of a goal-getter.

That makes sense. Norwich rely heavily on Emi Buendía while Dean Smith's side hang their hopes on Grealish for everything creatively. That explains the difference in the key passes stat, too.

For some sides, this would be a problem. But Liverpool's forwards are primarily there to be goal threats. Cantwell is whereas Grealish, in that regard at least, is an unknown.

The Norwich No.14 has found the back of the net against Chelsea, Manchester City, Everton and Arsenal this term, showcasing his big-game mentality. He's also chipped in with two assists in the win over Newcastle United and goals against Wolverhampton Wanderers and Crystal Palace.

Liverpool fans might have expected bigger names. The reigning European and world champions have been linked with Jadon Sancho, Timo Werner and Kylian Mbappé in recent weeks. But Cantwell would be one of those squad players that every top team could do with.

With Adam Lallana set to leave Anfield at the end of the season, the Reds need a player who can fill that void. During his time on Merseyside, the former Southampton captain has played as an attacking midfielder, as a wide forward, a box-to-box midfielder and as a No.6.

Stylistically, Cantwell is similar to the version of Lallana Liverpool signed in 2014. If their playing profiles are as close as they appear, there's no reason the Reds couldn't morph him into the long-term replacement for Lallana.

For the rumoured £30million fee, the table-toppers could land a player who develops into one of the constants within their squad over the next decade.