Liverpool vs Shrewsbury: Our betting tips

Liverpool saw their League Cup game against Arsenal postponed in midweek but they're back in action here. Will they cruise through? Find out with our Liverpool vs Shrewsbury match preview with free tips, predictions and odds mentioned along the way.

Liverpool to win it by the odd goal

This might be an outlandish take but we're backing Shrewsbury to keep things tight in this match hence the fact we are backing a draw with Liverpool at a minus one handicap. Shrewsbury going to Anfield is a huge occasion and they'll go their at full strength with nothing to lose; they also happen to be in decent form having taken 10 points from the last 12 available in League One. Liverpool meanwhile will be without several key players whilst others will likely be rested. They will still have enough in the tank to win the game but a canter it will not be.

We're not expecting loads of goals

Along with backing Shrewsbury to put in a decent performance we think that means this will be far from a crushing home win. Shrewsbury will travel to Liverpool looking to keep the Reds quiet and without those truly stellar names in the lineup to unlock the doors it could be a tougher than anticipated afternoon for the home side. Shrewsbury are no mugs defensively either; they've kept three clean sheets on the spin heading into this match.

Check out the key stats & form for Liverpool vs Shrewsbury

There is no denying the difference in quality between Shrewsbury and Liverpool but there is no way this match will be strongest XI vs strongest XI. If Liverpool do as anticipated and field the kids then Shrewsbury might fancy their chances of taking them back to their place.

Liverpool's Premier League title hopes are hanging by a thread so the FA Cup might be seen as a good opportunity for silverware; they won't be going with anything like their first XI though.

The opportunity to play at Anfield doesn't come around very often for clubs like Shrewsbury. They'll be going with the best team they can possibly put out.

A brief FAQ ahead of Liverpool vs Shrewsbury 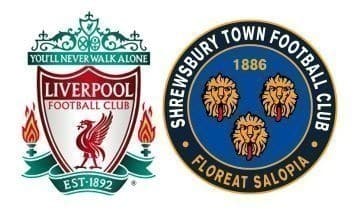