As a club whose fan base expect so much in comparison with what is actually delivered, Liverpool will always be deemed to have problems that need solving.

The latest of these involves chances. Chances to win, conceding chances and chances not taken.

After Liverpool’s 1-1 draw at Newcastle Jamie Carragher commented: “A lack of concentration has cost Liverpool yet again, and whenever they concede chances they are always big chances.”

Whether they’re judged by former professional players such as Carragher, data miners such as Opta, or fans watching the game, big chances are subjective, but it’s clear for everyone to see that Liverpool give up a lot of them.

From the complicated data analysis to untrained eye, everything backs up the belief that if Jürgen Klopp’s side concede opportunities during a game, they give the opposition a great chance to score.

This tweet from Andrew Beasley earlier in the season shows how generous the Liverpool side are to opposition attackers.

The club are currently leading the way for big chances (or clear cut chances — CCC) conceded in the Premier League this season.

12% of shots in the 2017/18 PL are clear-cut chances. Here's the proportion of opposition shots which are CCCs by team. Look away, Jurgen. pic.twitter.com/e9G6c0QhO0

Luckily for Klopp, they also create quite a few. They are third in the league for expected goals, and lead the top flight for shots per game with 19.6.

Their expected goals stands at 14, and they’ve scored 13, but given their domination of games you would hope their territorial advantage would count for more.

Expected goals doesn't take into account shots not taken, and there have been numerous moments where good attacking positions have come to nothing —  not even a shot.

The graphic below from Stratabet’s Ray Hamill demonstrates perfectly how Liverpool games are full of opportunities for both sides, and that the club are out on their own among teams from Europe’s top five leagues when it comes to creating and allowing good chances. 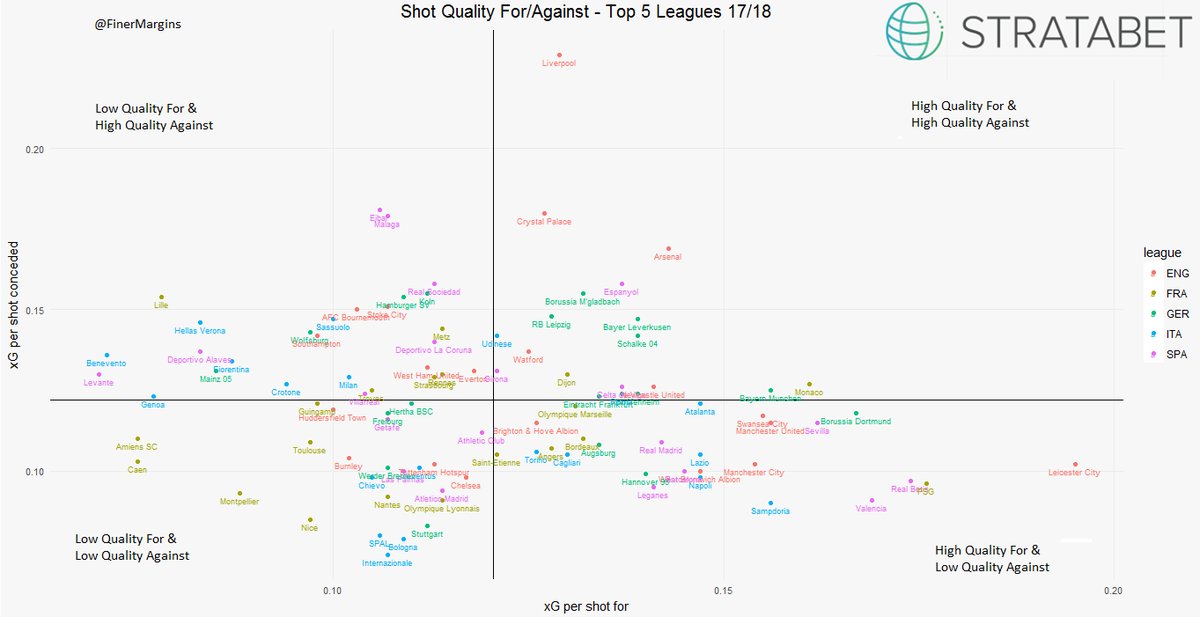 How can the club turn this around? And more specifically how can they start to capitalise on the possession they have?

They average more than 55% possession per game, a figure which would be even higher if it wasn’t for the Manchester City fixture in which they played with ten men for over 50 minutes.

Introducing two strikers would give the team more of an outlet up front, and might even help them defensively as their possession has more purpose, similar to the way City use possession as a defensive tool under Pep Guardiola.

The Manchester club may only appear to have one striker much of the time, but the use of Sergio Agüero and Gabriel Jesus in the same side means they often have a pair.

With Liverpool having the likes of Daniel Sturridge, Dominic Solanke and the returning Danny Ings, they have plenty of options when it comes to adding more central attackers to the mix. 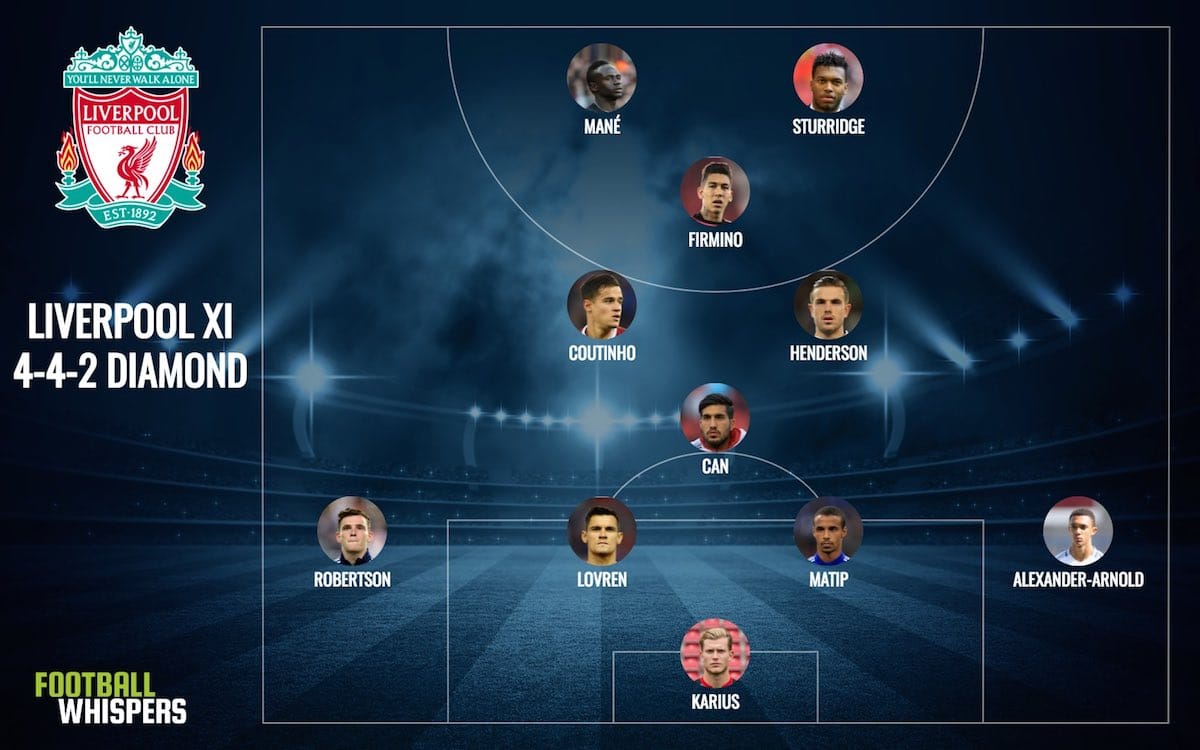 One option they could opt for is a diamond midfield in a 4-4-2 system. This would mean that the attacking full-backs such as Alberto Moreno or Andy Robertson on the left, and Trent Alexander-Arnold on the right, would have to provide the width.

This is something they have already demonstrated this season. Robertson’s excellent crosses going into two strikers rather than one, plus an advancing attacking midfielder, are bound to result in goals.

It's not too different to the shape Liverpool have been playing already this season, but instead of Roberto Firmino dropping deep from a centre forward position, he would be building play from attacking midfield before advancing. And instead of two wingers being the most advanced players, a genuine striker would be added to the mix.

The problem with this system is that it may take away one of the side’s strengths, which has been the use of Sadio Mané and Salah as inverted wingers. However, one of these playing as a striker, roaming from the centre into wide areas, could be an option which poses all sorts of threats to the opposition.

A flat 4-4-2 is less likely, but a wide midfield role on the right could turn out to be Jordan Henderson’s best position. He has the ability to swing crosses in from deep, and as is the case with Robertson he would have more to aim at if there were two central strikers.

This formation might lead to fewer chances for the opposition given the two banks of four it offers in defence, with the strikers helping out on the counter-press. But it would mean leaving out one or two of Liverpool’s best players, so is unlikely to be tried.

This formation is another option if Klopp is to try a two-striker system. The use of a double pivot would offer protection for the defence, while asymmetrical pairs in the next lines of two could offer several options.

The graphic below shows a more straightforward example, but it's a system where the manager would have plenty of options for fluid movement in the front four should he choose to use it. 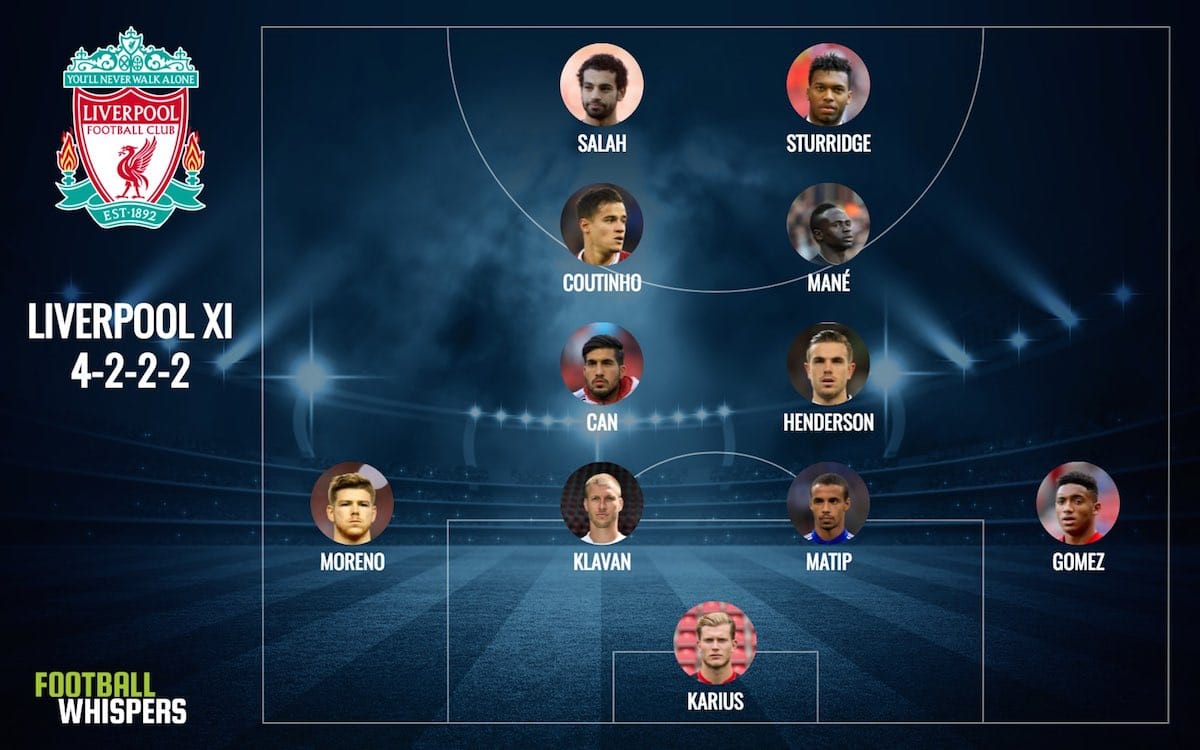 It would also mean there would be a genuine threat sat on the bench, which could also encourage the manager to make earlier substitutions if needed.

The formation may also suit new signing Alex Oxlade-Chamberlain, who could push for a start as one of the attacking midfield pair.

This is the most interesting and fashionable lineups currently in use among the teams at the top of the Premier League. Many sides use a back three with a 3-4-3 formation, but Klopp could try something different.

Liverpool have the players to try it. Emre Can can act as a sweeper moving into midfield when in possession, while Joe Gomez and Ragnar Klavan, have both spent time at full back in the past so will be familiar with defending in wide areas.

It would suit the wing-backs, especially with Alexander-Arnold having previously played in midfield, and would provide the two strikers needed to add firepower up top.

The problem again is where to accommodate Salah and Mané, and it's increasingly looking like an outing for one of this pair as a central forward should be on the cards. 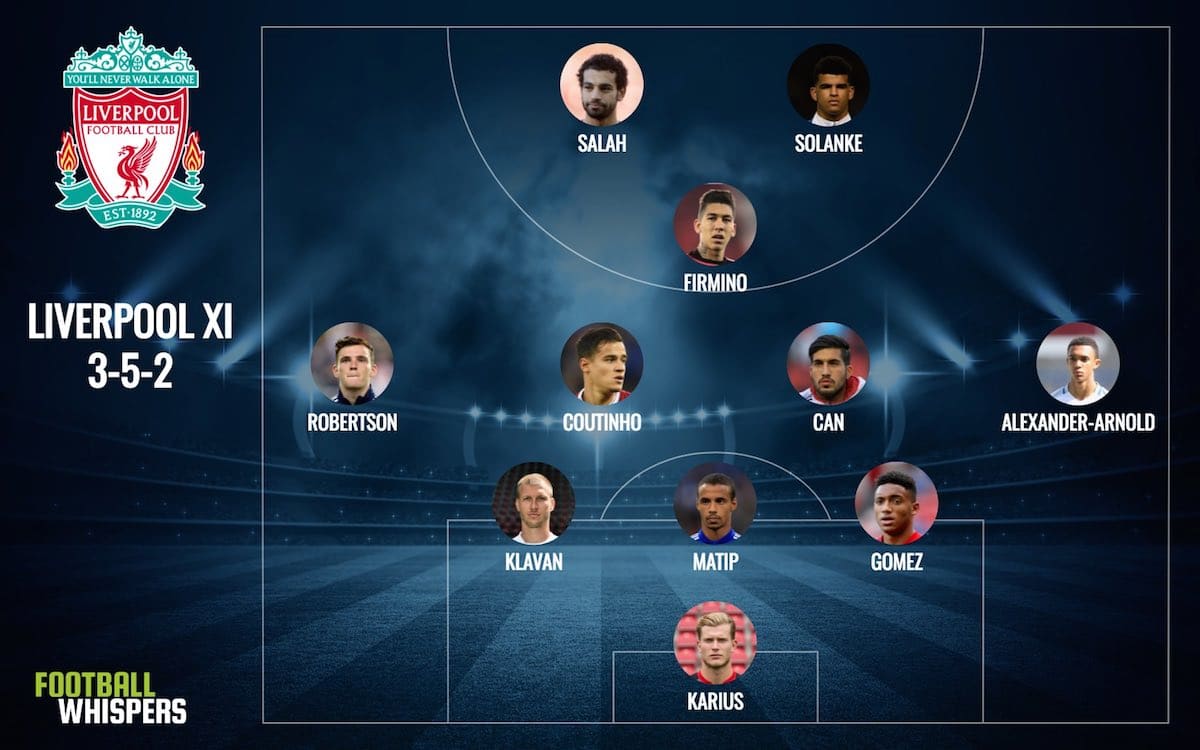 Even if it means making tough decisions and dropping players who currently seem un-droppable, it might be worth the risk for the Liverpool manager if it means the team begin to get the results their dominant play deserves.

The team unit may be stronger, more tight-knit, and more balanced as a result, and while there may not be the dazzling sight of two lightning quick wingers on the pitch at the same time, this might lead to better control of games, more composure, and more economical play at both ends of the pitch.