Liverpool have been linked with a number of attacking players this summer. While the Reds made their intentions clear in the defensive and middle third in Virgil van Dijk and Naby Keïta, the reinforcements in attack haven't been quite so constant, and a number of players have been linked to add depth to Jürgen Klopp's attack.

Kylian Mbappé and Pierre-Emerick Aubameyang whet the appetite of fans and had their imaginations running wild while the tentative links to Àngel Correa and Maxi Romero no doubt piqued their interest.

And now the Reds are being linked with another player who would fall into the latter category above. Football Whispers exclusively revealed that Trabzonspor attacking midfielder Yusuf Yazici has emerged as a surprise transfer target.

The highly-rated 20-year-old is on the radar of many of Europe’s top clubs having impressed since making his debut for the Turkish side during the 2015/16 season.

Yazici shares an agent with Arsenal playmaker Mesut Özil and was even rumoured to be an Arsenal transfer target towards the end of last season according to reports.

Their interest was rivalled by Manchester United, Lyon and PSV, with each team sending scouts to watch the versatile attacking midfielder on multiple occasions.

Sources close to the player revealed exclusively to Football Whispers that the Merseyside club have been impressed by Yazici and want to bring him to England.

However, they are just one of the many teams in the Premier League keeping a close eye on the player and Klopp will have a monumental task on his hands to ensure the player ends up plying his trade at Anfield.

It was initially reported that Trabzonspor would part with the player if an offer of £7million arrived. But reports in Turkey this weekend suggested bids close to that fee from two English clubs have already been rejected.

With interest high in the player there’s a potential bidding war to be played out. And Liverpool should definitely be involved.

Would Yazici fit the Liverpool profile?

Liverpool are thought to be targeting a number of players aged 21 and under to supplement their current squad and be a part of a team the club are hoping to piece together under the watchful eye of Klopp as they look to challenge on all fronts for a sustained period of time.

The former Chelsea striker has impressed in pre-season despite arriving to very little fanfare, so much so his form could see him displace Divock Origi and Danny Ings in Klopp's long-term plans.

Yazici would arrive with the future in mind. The talented 20-year-old would have a part to play now but expectations would no doubt be tempered due to his age and where he's arriving from.

His playing time would be managed and his development closely monitored – and rightly so.

It’s easy to see why those at Liverpool are eager to sign him: Yazici has a similar build to Marko Arnautović, a player Klopp has praised in the past; and stands at 6ft 1ins.

He's not your stereotypical attacking midfielder by any stretch of the imagination but he is powerful when in possession, direct and quick.

His frame throws up comparisons to Manchester United transfer target Ivan Perišić, too, a player Klopp managed at Dortmund. So the precedent is there for Klopp and attackers with that sort of profile – multifunctional, powerful midfielders who offer a goal threat.

The left footer can play on either flank but often operates in central areas more comfortably and, while his ability when in possession is obvious, it’s what he does off the ball – 3.1 tackles per 90 minutes and endless bundles of energy – which helps you understand why Klopp is a fan.

But what really makes Yazici stand out is his spatial awareness and general intelligence, especially when you consider his age and inexperience.

He's made just 24 appearances for the Trabzonspor first-team but has already been called up to the Turkish national side. 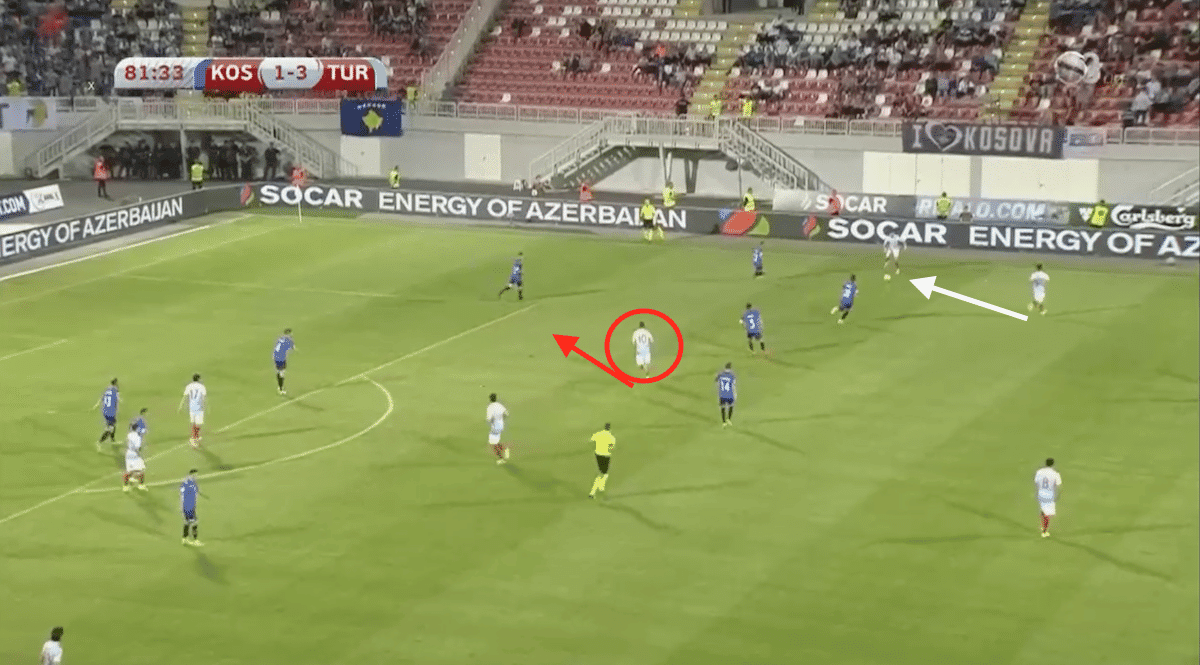 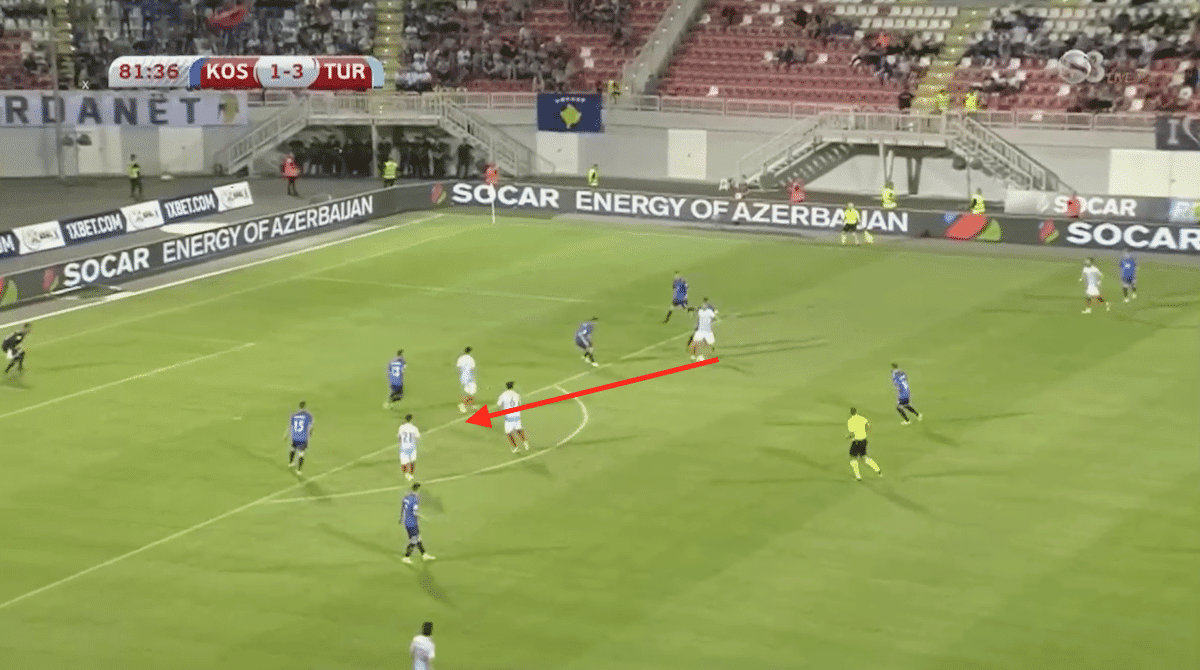 In the two pictures above you get to see Yazici's intelligence as well as his vision and ability to pick a pass. In the first screenshot you see the ball being played out to the right flank. As soon as this happens the 20-year-old, circled in red, darts to take up a position between the lines and makes the most of space afforded to him.

In the second picture Yazici has recieved the ball and his quick feet have allowed him to get it onto his favoured left foot facing the opposition's goal. He's turned the man closest to him and is able to pick a pass out.

The obvious one would be to the closest team-mate to him. But he misses him out and the man on the edge of the area makes a run into the box, takes the pass in his stride and fires home. It looks simplistic, and probably is, but Yazici shows that sometimes less is more.

His movement between the lines coupled with his quick distribution of the ball lead to an assist. 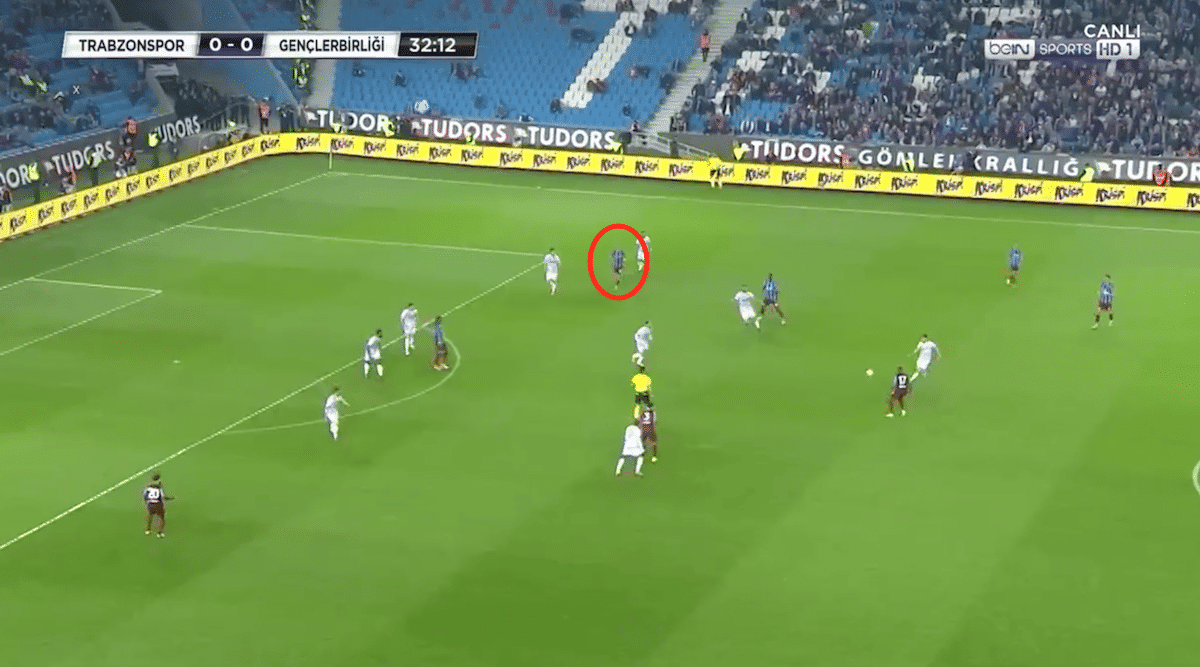 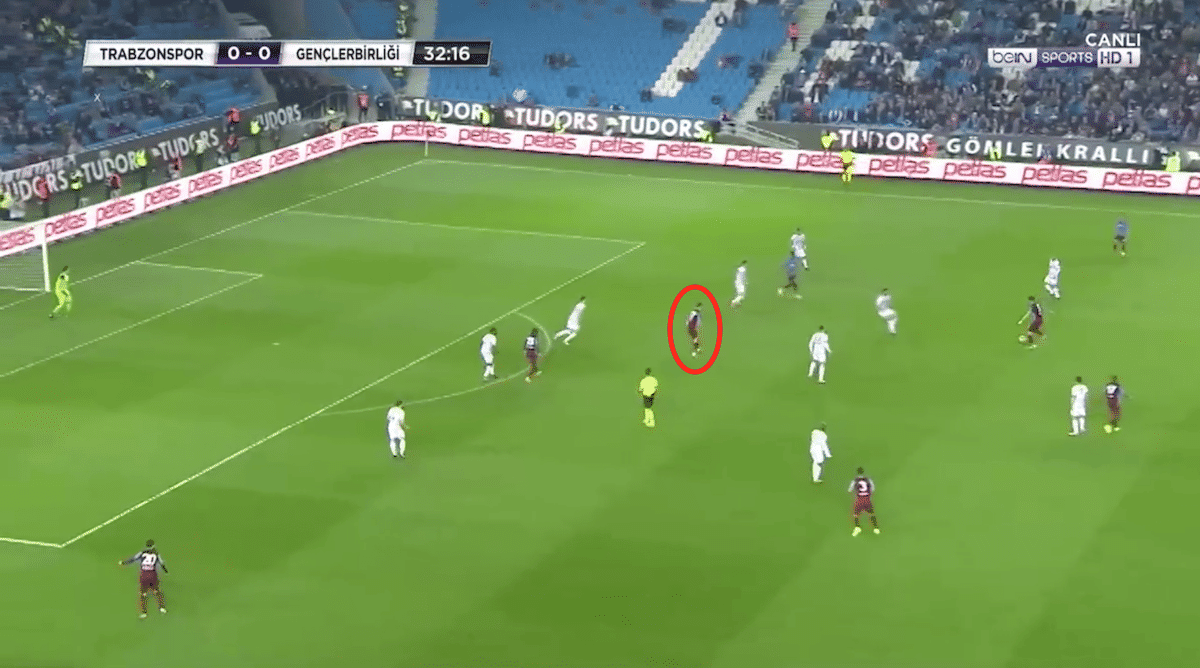 It's a similar story in the pictures above. Yazici starts in a wide right position but, as play progresses and the opposition are moved about, he intelligently takes up a more central position in the space. Again, this isn't all down to his brilliance but more to do with him reacting to what his teammates are doing and making the most of it.

He picks the ball up, skips a challenge and tests the keeper from distance.

The fact he can start in wider areas and drift into central zones makes him an ideal fit for the Liverpool attack because it's what they do. 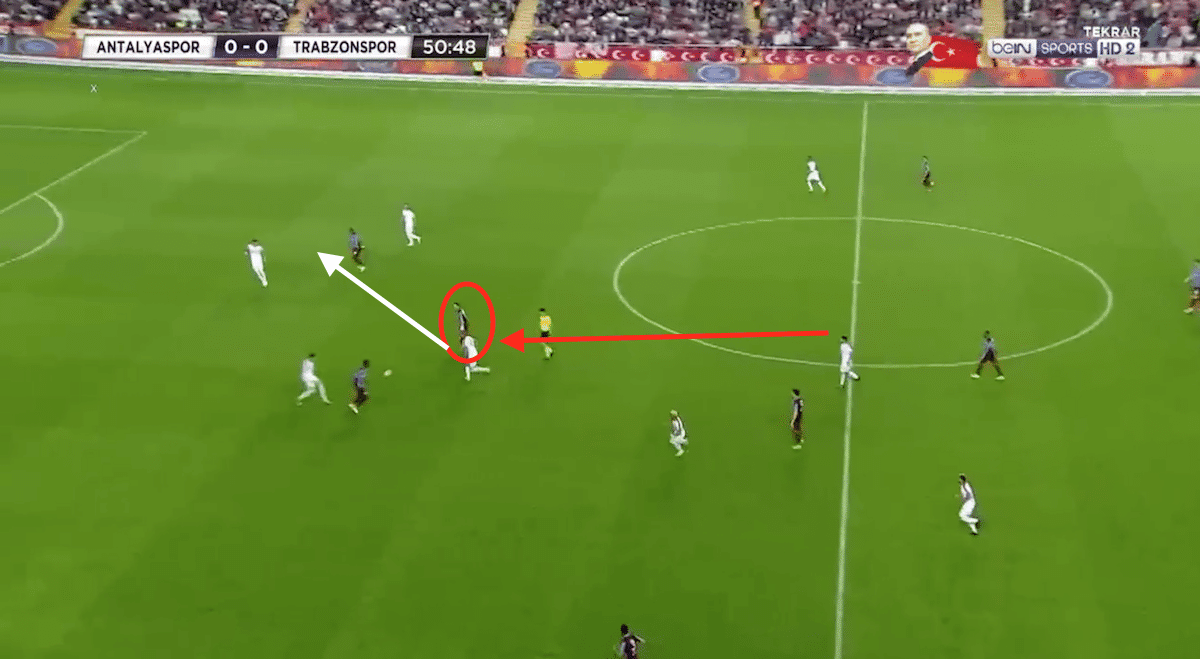 This picture helps paint the picture of Yazici the creator. He makes a run from a deeper area to pick up a pass and instead of driving into the space ahead of him he threads a ball through to the striker.

It's by no means an easy pass, and you could even argue it's the wrong one given the space he has ahead of him to run into, but he takes it early and makes it. Two players are taken out of the game and Trabzonspor go a goal up.

Players are often criticised for holding onto the ball for too long and waiting for an easier pass before releasing it. But Yazici showed in that sequence he's more than happy to pull the trigger as soon as he can. Sometimes it will be intercepted but playing on the cusp is what will get Sadio Mané and Mohamed Salah amongst the goals on a regular basis.

He'd be a fine addition to the squad but for now he'd be nothing more than a luxury. But Liverpool could do with some luxury players.