Anderson Talisca is reportedly once again on Jurgen Klopp’s radar after Liverpool sent scouts to cast an eye over him in a recent Europa League tie. The Besiktas forward, who is on loan from Portuguese giants Benfica, failed to find the back of the net in a 1-1 draw with Olympiakos but did no harm to his reputation with the performance.

The Brazilian playmaker was linked with a move to Anfield in the summer with the Reds even applying for a work-permit. He was then set to move to Championship side Wolves after Benfica manager Rui Vitoria made it clear that the player wasn’t part of his long-term plans. However, Jorge Mendes, the player's agent, orchestrated a two-year loan deal to Turkish side Besiktas instead.

Talisca has settled into life in Turkey seamlessly, at least on the playing field, and has quickly become one of the team’s key players. He’s scored seven league goals in 13 league appearances as well as scoring an injury time equaliser in the Champions League against his parent club Benfica. He even celebrated.

There’s talk that Besiktas have an option to buy him at the end of the season but they can’t afford, or justify, the £20million meaning he could end up being on the open market. It’s a fee Liverpool could comfortably afford and the player’s salary, currently £15,000-per-week, could easily be tripled. Serie A club Lazio are reportedly eyeing up the versatile attacker as a contingency plan for if either of Felipe Anderson or Baldé Keita leave this summer.

The Reds wouldn’t have a free run at the player but it’s safe to assume they’d be at the front of the queue. Should he top Liverpool’s list of transfer targets though?

A Closer Look at Anderson Talisca

Liverpool have a tradition of signing untraditional Brazilian playmakers and Talisca would be the third following on from Philippe Coutinho and Roberto Firmino.

You usually associate samba flair to be picture perfect, but there's nothing pretty about Firmino's style of play. Yes, he's capable of the sublime but what makes him so effective is his determination. He's more likely to create a chance after executing a perfect slide tackle than he is after dancing past six of the opposition's players.

Likewise with Coutinho. He's more of of a stereotypical flair player than Firmino, who has the ability to do things that leave you wondering what's real and what's not, but at the same time he pops up in defensive positions and it's not something that's usually advertised in the brochure when shopping for a South American attacker.

I would not be at all surprised to see Anderson Talisca in the Premier League in the next few seasons. Ideal for Prem football

Talisca, the 6ft 1ins gangly playmaker, would complete the weird and wonderful set for the Merseyside club.  He's not your typical trickster who dazzles with quick feet but more of a powerhouse who is robust and direct. Think Yaya Touré playing in the attacking midfield role for Manchester City. He still has the ability to produce moments of magic though and former Benfica manager Jorge Jesus once said he shared similarities with Rivaldo.

For Besiktas this season he's averaging 1.1 key passes and completing 0.7 dribbles, which is inferior to his Liverpool counterparts. Sadio Mané averages 1.7 key passes with both Coutinho and Firmino weighing in with 2.1 per 90 minutes. In terms of dribbling, all three of the Liverpool players complete 2 or more.

It is worth noting when comparing Talisca's stats to those playing for the Merseyside club that he has only featured in 1106 minutes of play compared to Coutinho (1526), Firmino (2316) and Mané (2101). The larger the sample size the better you can judge a player.

The former Bahia man always seem to be that one pass away from brilliance. It's highlighted in his passing stats which show he completes 77.6 per cent of the 33.1 passes he attempts per game. Playmakers often try to execute the difficult, it's in their nature. He's got the eye to spot a pass but doesn't always have the ability to pull it off.

However, the invention in his game should applauded and when it works for him he's capable of taking out an entire defence with one pass. 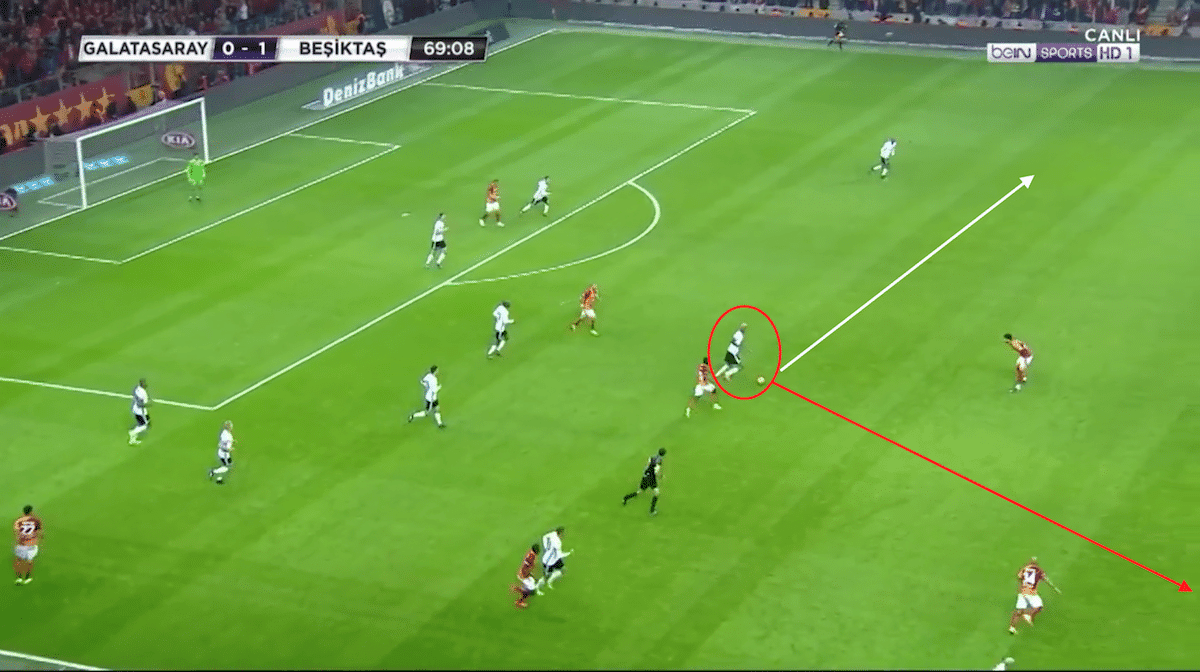 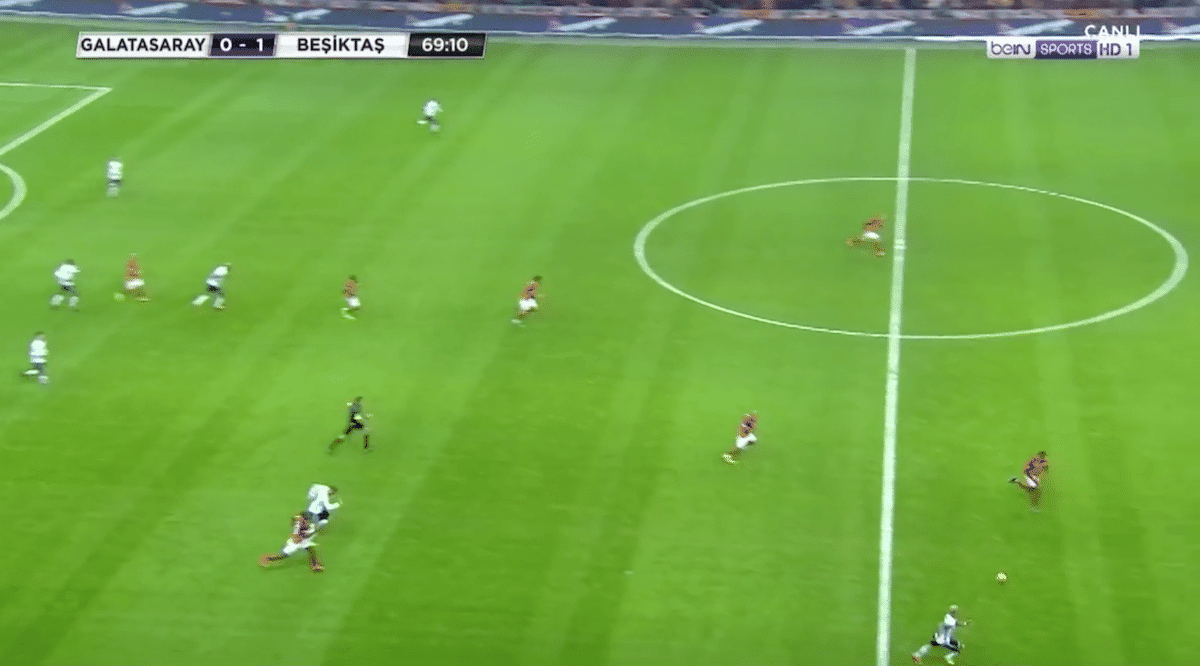 Liverpool are often accused of playing the safe pass and lacking that incisiveness from deep areas to really do damage to the opposition. In the first picture you see Talisca in possession of the ball and he has an easy pass – highlighted by the white arrow – to his left.

He ignores that and instead plays a pass highlighted by the red arrow. It's threaded between the Galatasaray players and into the space for Ricardo Quaresma to race onto. In the second picture you see how stretched the home side are because of Talisca's positive, incisive pass from a deep area. 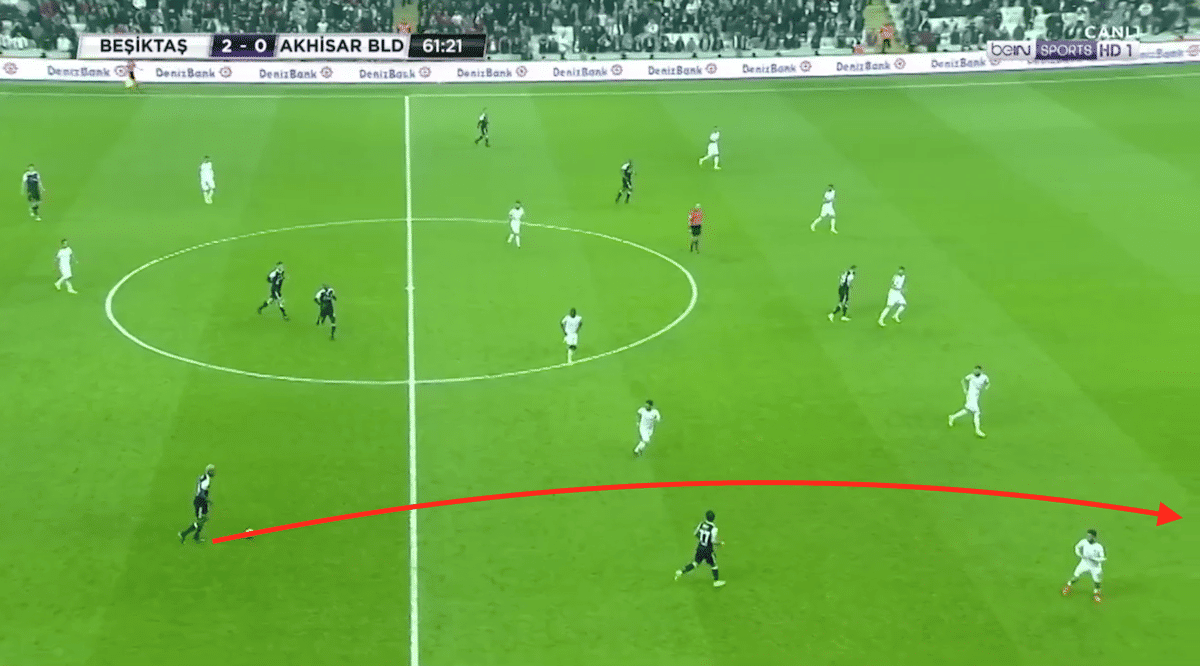 He knows how to break the defensive lines. In the picture above you again see how he ignores the easy pass, to the teammate just ahead of him, and opts to play a perfectly weighted ball between left-back and left centre-back for the man making the run down the Besiktas right.

The Reds don't often encounter such a high-line but these kinds of passes work well against teams looking to sit deep too. The sort of passes which turn the opposition around.

– Off the ball movement 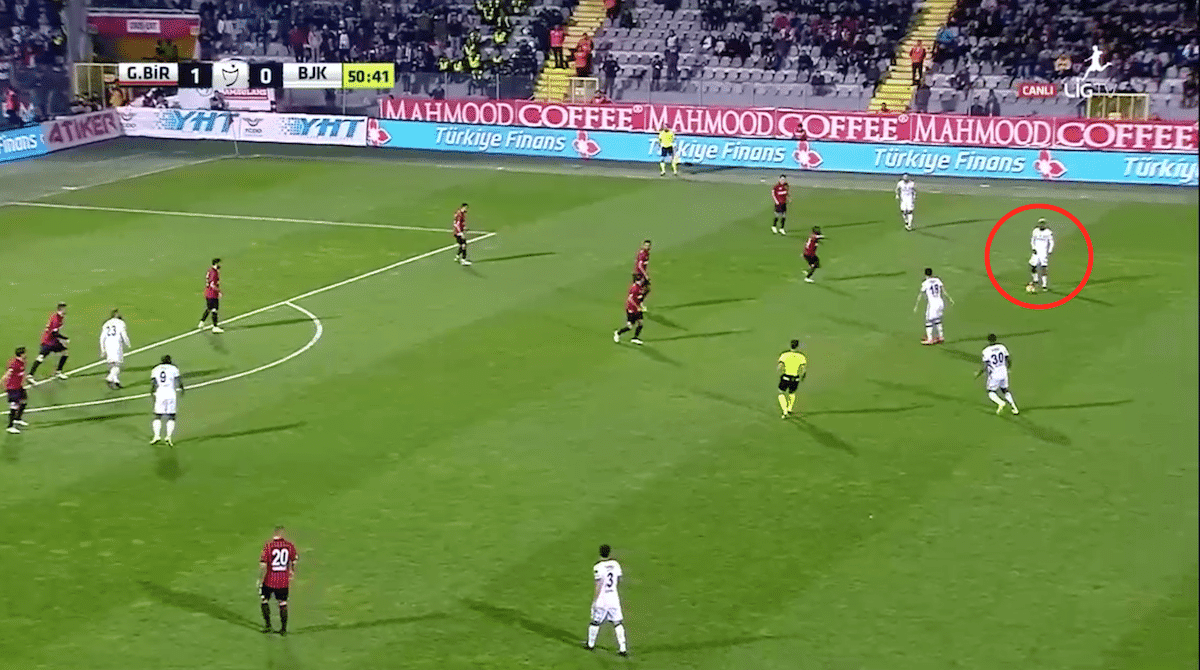 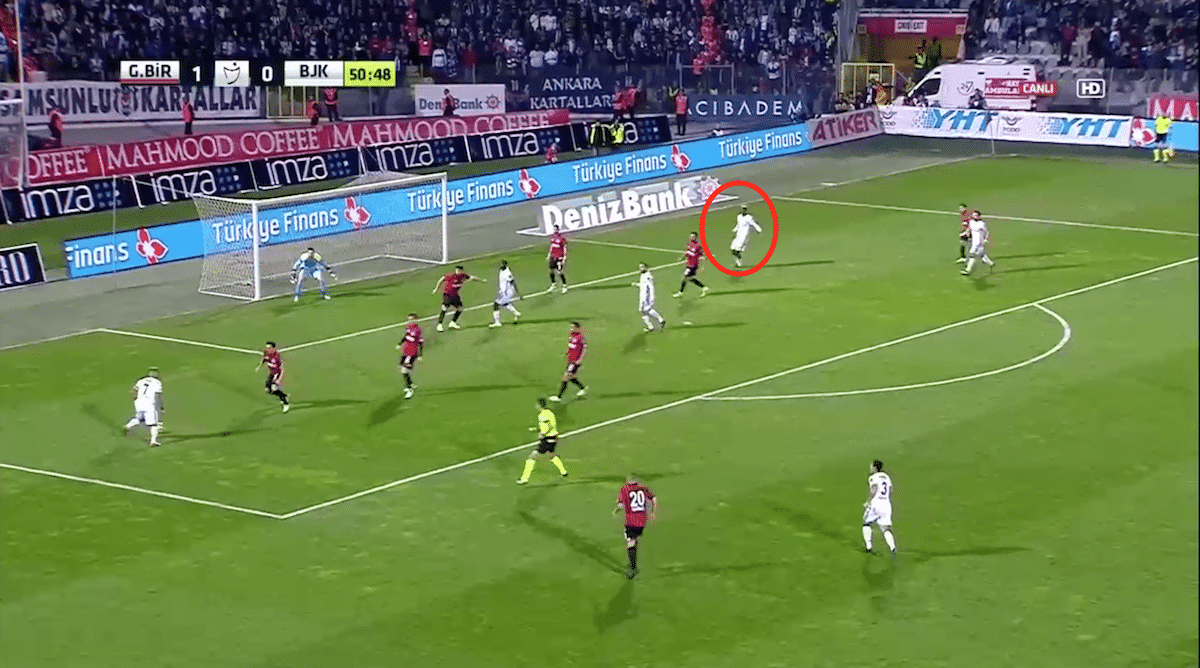 Liverpool have had a lot of joy this season due to the fact they get players into the penalty area. In the past they have been accused of having too many creators, those wanting to play the pass before the goal, and not enough players wanting to get on the end of the move.

But with the likes of Gini Wijnaldum, Adam Lallana and Emre Can all chipping in with goals they've solved that issue. They've added variety to their game and Talisca would strengthen that. In the first picture above he's in a deep area looking to create something on the ball. In the second picture, having played a pass into the area, he finds himself at the back post and he's able to nod the ball home.

He doesn't just admire his initial pass. He shows a desire to get into a goalscoring position. 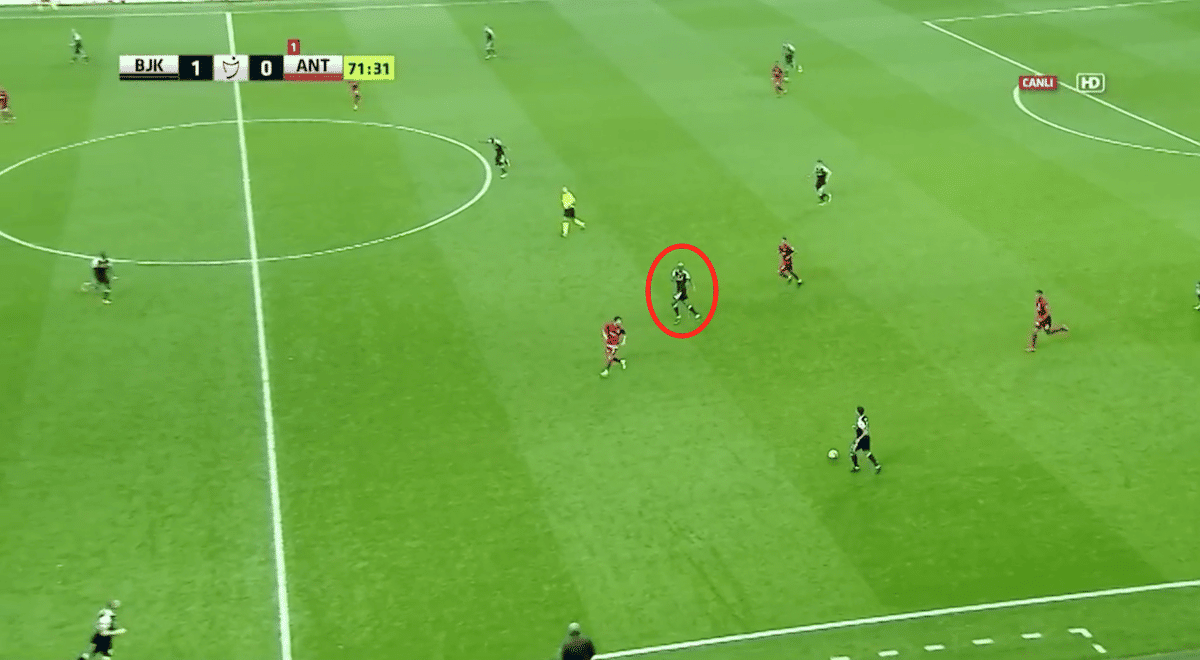 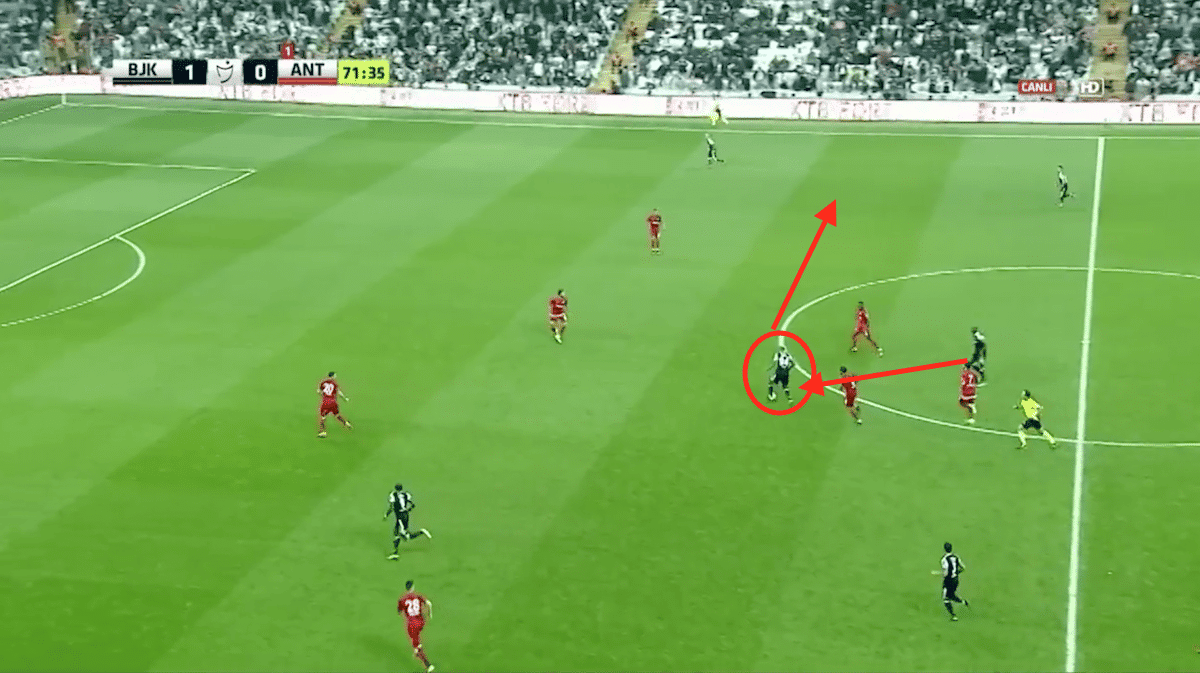 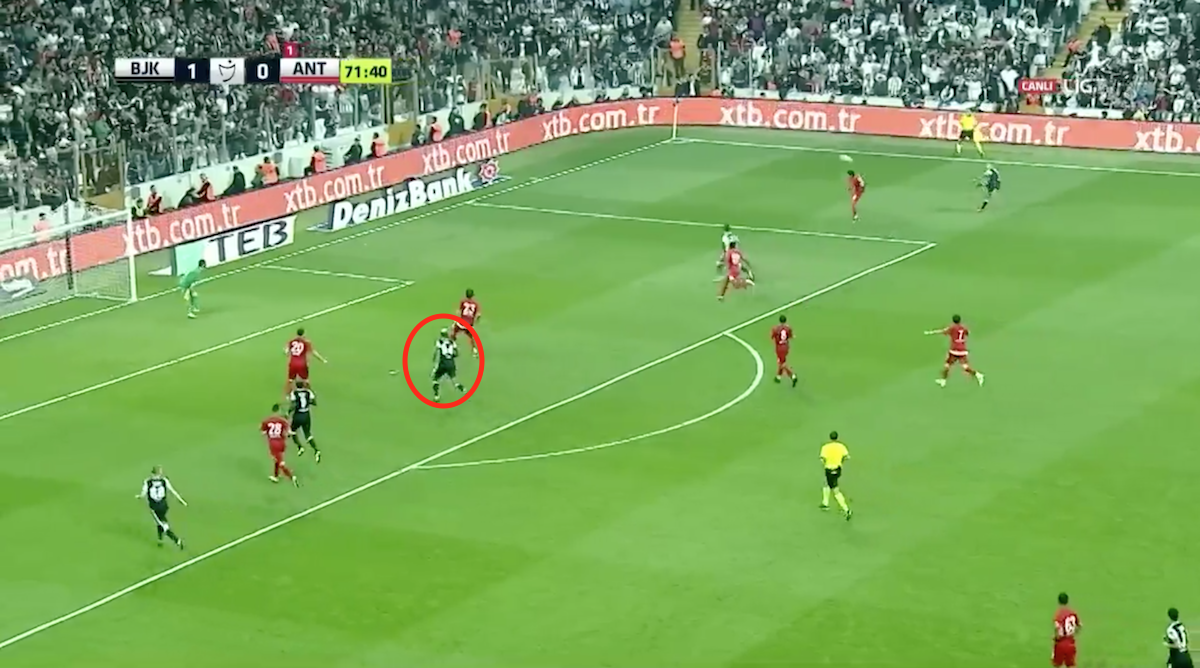 It's a similar story in the above three pictures. He's circled in a deep area as Besiktas look to build play from the back. The ball is played forward and he makes a run to support the play and give the man on the ball a passing option. He then receives the pass in the second picture and plays a first time pass out wide. As the ball is played into the penalty area he's in a central area and he's able to head it home. There's just the nine seconds between picture one and picture three.

When judging attacking players people often look at their goal record throughout their career. For context, Talisca scores a goal every four games – 40 goals in 165 games. He's averaged double figures in all competitions over the past three seasons which is a good return no matter what league you're playing your trade in.

However, when you scratch below the surface and look at the types of goals he's scoring it's only then you notice he might not be able to sustain such numbers. Simply put; his goals aren't transferable.

He scores long-distance strikes and free-kicks. Just six of his last 16 goals have come from inside the penalty area.

Will he be afforded the same time in England around the penalty area as he is in Turkey to get his shots away? Will his team be winning free-kicks in dangerous areas for him to be able to get the opportunity? The quality of goalkeeping, for the most part, is better in the Premier League too.

When judging his suitability for Liverpool you ideally need to look past his goal record. Having said that, for £20million you could do much worse than Talisca.