Liverpool manager Jürgen Klopp is plotting another raid on the Bundesliga this summer with Eintracht Frankfurt midfielders Omar Mascarell and Mjiat Gaćinović on his wish-list.

Football Whispers understands that Liverpool have had scouts watching the pair over recent weeks and the reports have been positive. It is believed the players would be available for close to the €20million (£17million) mark.

According to recent Naby Keïta is a leading target for the club as Klopp looks to energise his midfield. Whether the Eintracht Frankfurt duo are alternatives to the highly sought after midfielder remains to be seen.

Mascarell and Gaćinović may not be the household fans crave for but that does not matter to Klopp who has shown that he looks for suitability, not reputations, when piecing together squads.

If they did make the move to Merseyside this summer they would take the number of players to have swapped Germany for Liverpool to six since Klopp's arrival at the club.

The Merseysiders welcomed Joel Matip, Ragnar Klavan, Loris Karius and Alex Manninger from the German top flight during the former Borussia Dortmund coach's first summer in charge of the club. 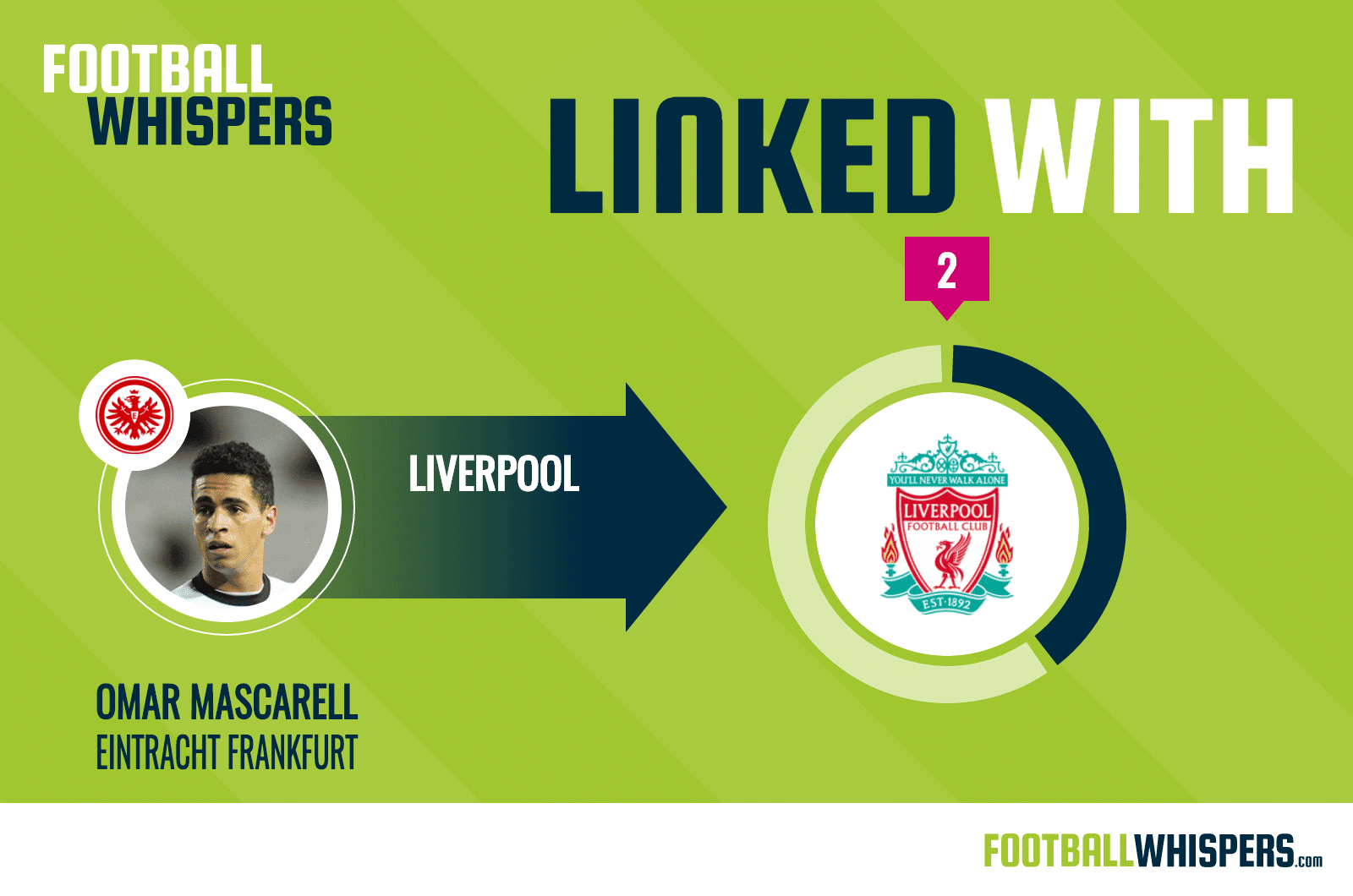 READ MORE: WOULD OXLADE-CHAMBERLAIN BE A GOOD SIGNING FOR LIVERPOOL?

Depending on what type of person you are will directly influence how you view Mascarell. A half glass empty sort of person will jump on the fact he's an Eintracht Frankfurt player who spent the 2014/15 season on loan at Derby County.

Those who have a more positive outlook on life will look at the fact he's a former Real Madrid player who came up through the ranks in the Spanish capital.

The 24-year-old moved to the Bundesliga on a three-year deal last summer in a transfer reported to be worth £800,000. He's took no time to settle into life in Germany and has been one of the team's standout performers in a defensive midfield role.

However, he's not just a ‘destroyer' and to label him him as just that would naive. He's incisive, progressive on the ball and press resistant in the sense his first instinct when chased down by a player isn't to retreat and play the ball backwards. 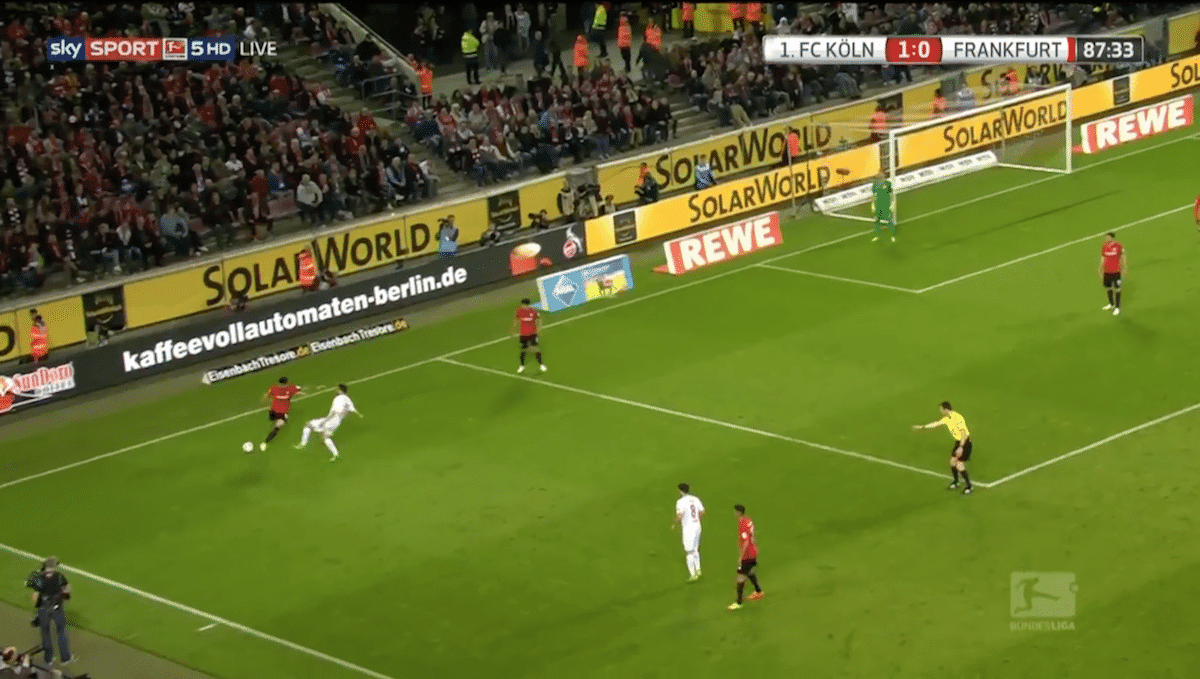 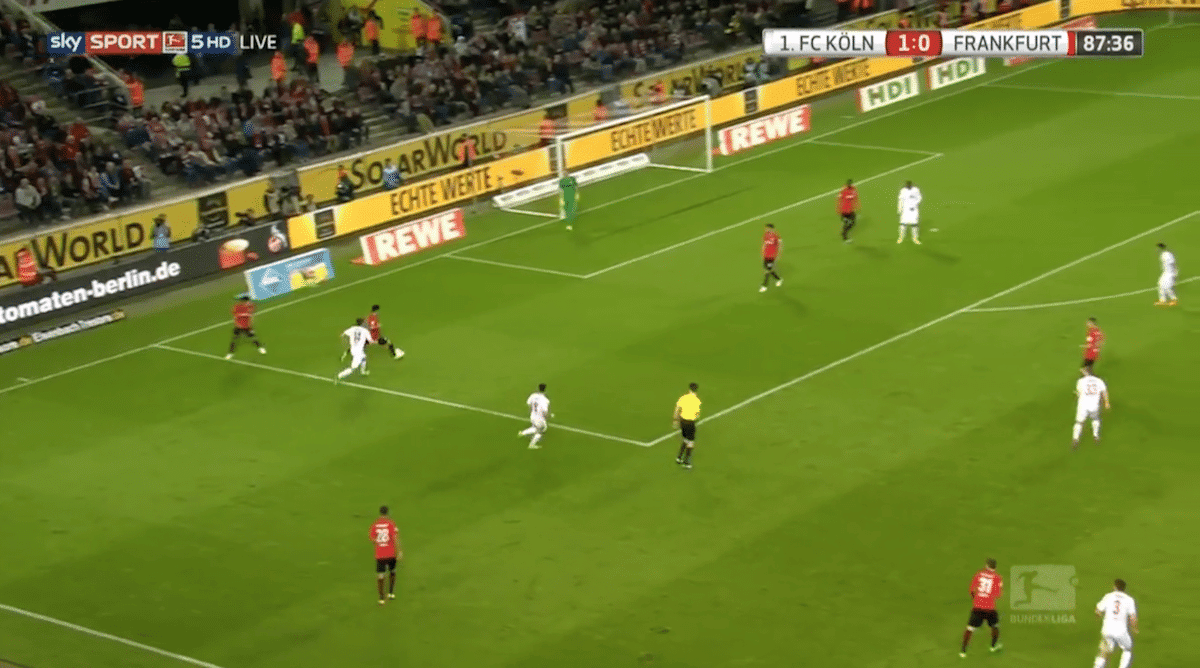 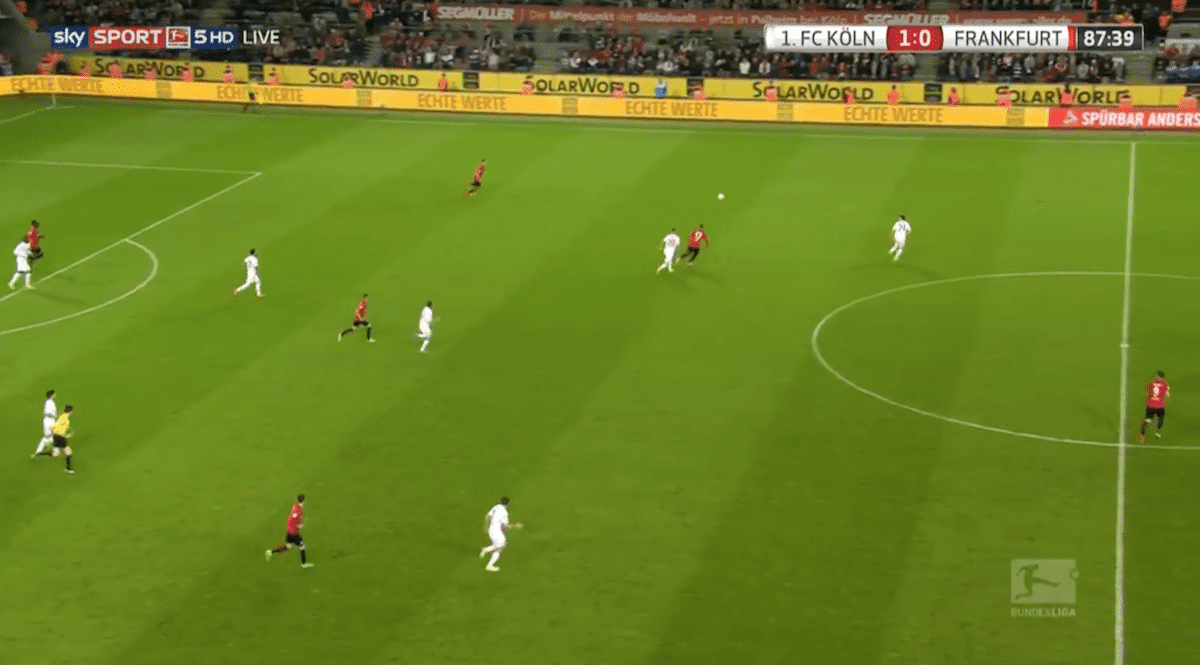 In the series of pictures above you see exactly that part of his game. In the first picture it looks as though he's just going to get rid of the ball with an FC Koln player in close proximity deep in his own half.

Instead he fakes the pass, cuts inside and plays a pass on his left foot to a teammate. It takes the majority of players from the home side out of the game. It not only relieves pressure but it starts an attack. 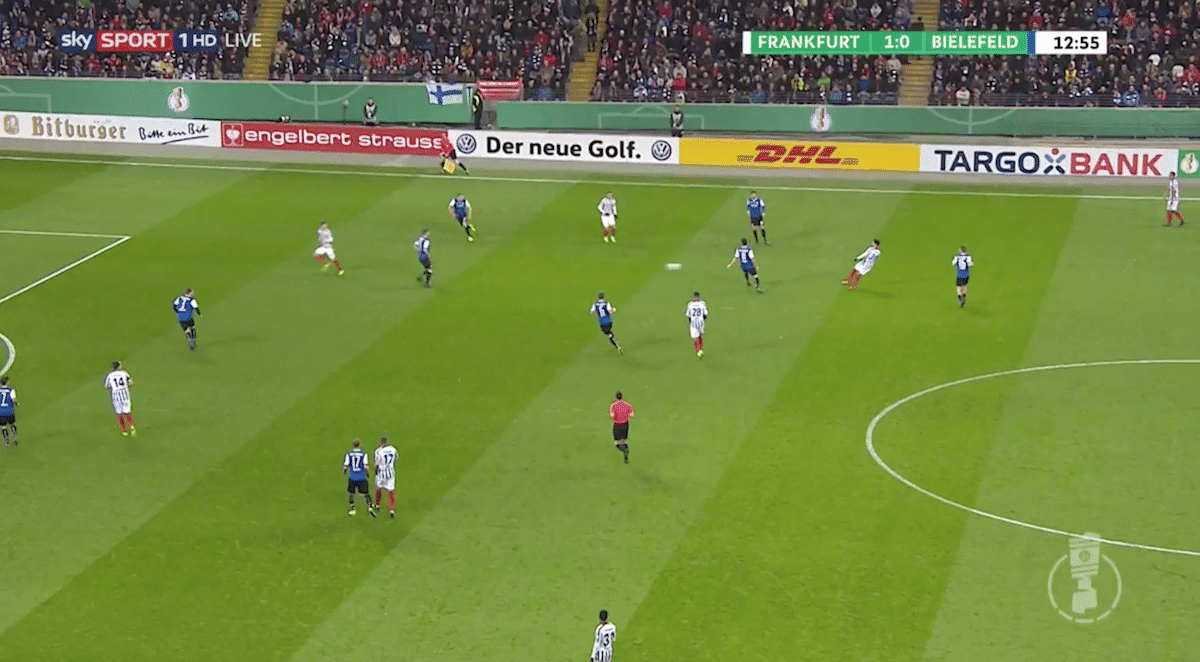 In this picture you see his incisive passing from deeper areas. He picks the ball up and there are safer passes on, to the man on his right, but he threads a through the midfield and defence into the path of his teammate. It looks fairly straightforward but to get that pass through so many bodies is not easy.

A criticism often levelled at the Liverpool midfield is just how safe they are on the ball. They now play a possession based game with the intention of working the opposition to create space to exploit but at times this borders on sterile possession.

There are, on occasion, too many players literally passing the buck instead of taking it upon themselves to make something happen in those deeper areas. 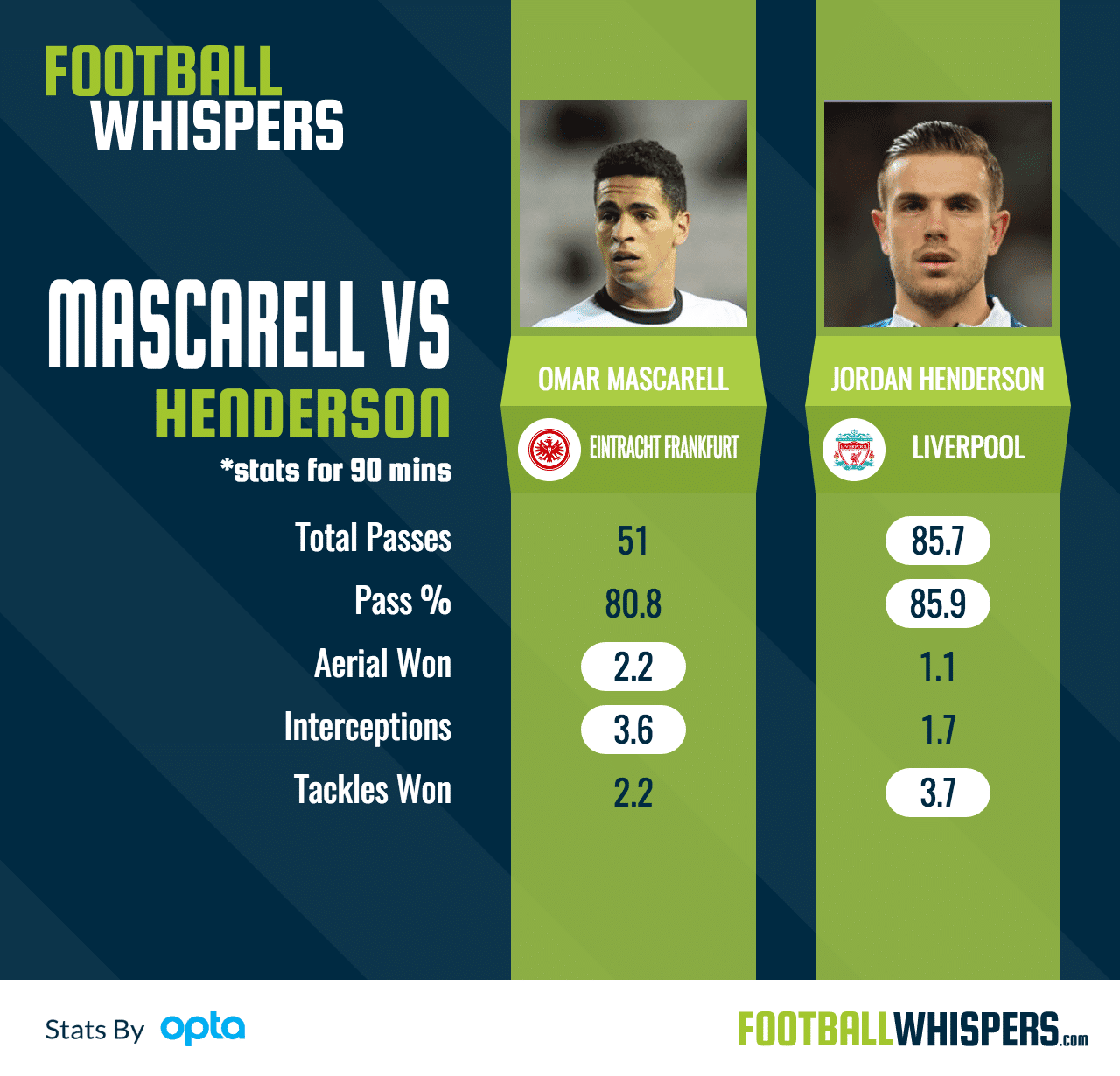 READ MORE: WHY DANIEL STURRIDGE STILL HAS A PART TO PLAY FOR THE REDS THIS SEASON

If he signed he'd more than likely be in competition with Jordan Henderson for a starting berth in Klopp's XI. He may not come in as a direct rival but more of a backup. After all the Liverpool captain has missed over 40 matches since the start of the 2015/16 season.

With Champions League football hopefully on the horizon the Reds need depth to cope with the increased number of games.

Mascarell's stats show potential. A high number os interceptions indicates a good reading of the game, he's good in the air and he wins his fair share of tackles. He'd have to adapt to seeing a lot more of the ball in the Liverpool side but that's not to say it would be a problem for the former Spanish Under-20 midfielder.

The only real concern is the number of yellow cards he picks up. He's been booked on 13 occasions this season in the 25 matches he's started. A positive is that he's not seen red. During his time at Derby he started 18 matches in the Championship and only picked up four cautions.

Would he be an able deputy to Henderson at the heart of the midfield?

The second Eintracht Frankfurt player to have caught the eye is Gaćinović. The 22-year-old midfielder joined the club in the summer of 2015 for a rumoured £1million.

The former FK Vojvodina Novi Sad captain was part of the the Serbia team that won the Under-20 World Cup in 2015. He made his debut for the national team in March and scored on his debut.

The versatile midfielder has played five different positions for the Bundesliga side this season and it's clear to see why Klopp is a fan. He's played right-wing, left-wing, right and left side of midfield as well as centre-midfield.

Liverpool were linked with Piotr Zielinski last summer and there are similarities between the two.

There's a flexibility to their game which means they're just as comfortable playing central midfield as they are playing on the wing. You could call him a busy body but he's got the sort of profile most modern managers want in their squad.

As you can see in the pictures above he's a goal threat. He starts in a wide left area and as play progresses he drifts into a central area. He picks the ball up, turns on it and barrels his way through challenges to fire home the equaliser.

It's those sort of goals which are transferable. It's not a wonder strike and it's unlikely to win a goal of the month competition. But it's the sort he'd be able to score in any league in the world.

He's not prolific, scoring only twice this term, but that may be down to the fact he's played a number of roles and he's yet to make one his own. Like Mascarell, he's no stranger to yellow cards having picked up eight so far.

One area he would have to improve, however, is his passing. He attempts just the 25.8 and completes 70 per cent of them. He's a risky passer of the ball and those attempts don't always come off.

It's not a negative but Liverpool like to dominate possession and losing it so frequently will hinder that. Their starting midfielders all average at least 20 more passes and none are below 80 per cent for completed passes.

For a combined €20million the Frankfurt pair would add much needed depth to this Liverpool squad. Looking at their profiles it's easy to understand why the Reds have had scouts in attendance.