Liverpool’s 3-1 victory over Arsenal appeared to be as routine as they come.

The Gunners arrived at Anfield with a new tactical plan. Some may call Unai Emery’s plan brave, others may deem it stupid. But the Spaniard's decision to play a midfield diamond has dominated post-match proceedings.

However, it’s Jürgen Klopp’s tactical tweak which should be applauded.

The Reds looked at home with Trent Alexander-Arnold and Andrew Robertson marauding down the flanks and making the most of the space the away side afforded them.

Why wouldn’t they? After all, it’s the approach used by the European champions last season. But as part of Jurgen Klopp’s ever-evolving philosophy, Liverpool have edged away from that tactic since the new campaign kicked off.

Instead of the width being provided by the full-backs, it’s Sadio Mané, Divock Origi and Mohamed Salah who have been hugging the touchline. The new variation of Klopp’s 4-3-3 sees the two box-to-box midfielders pushing on to support Roberto Firmino centrally.

On paper, the same areas as last season are being filled. Just this time around there’s a tweak to the individuals doing each of the respective jobs.

The new approach was evident in the opening games against Norwich City, Chelsea and Southampton.

Alexander-Arnold and Robertson sat a little deeper, changing their delivery points. Jordan Henderson looked more adventurous than ever as a de facto attacking midfielder while the wide forwards relished their individual battles against the full-backs.

It wasn’t perfect, with the Reds looking a little more exposed, and Liverpool kicked things off against Arsenal with a similar approach, evidenced in the screenshot below. 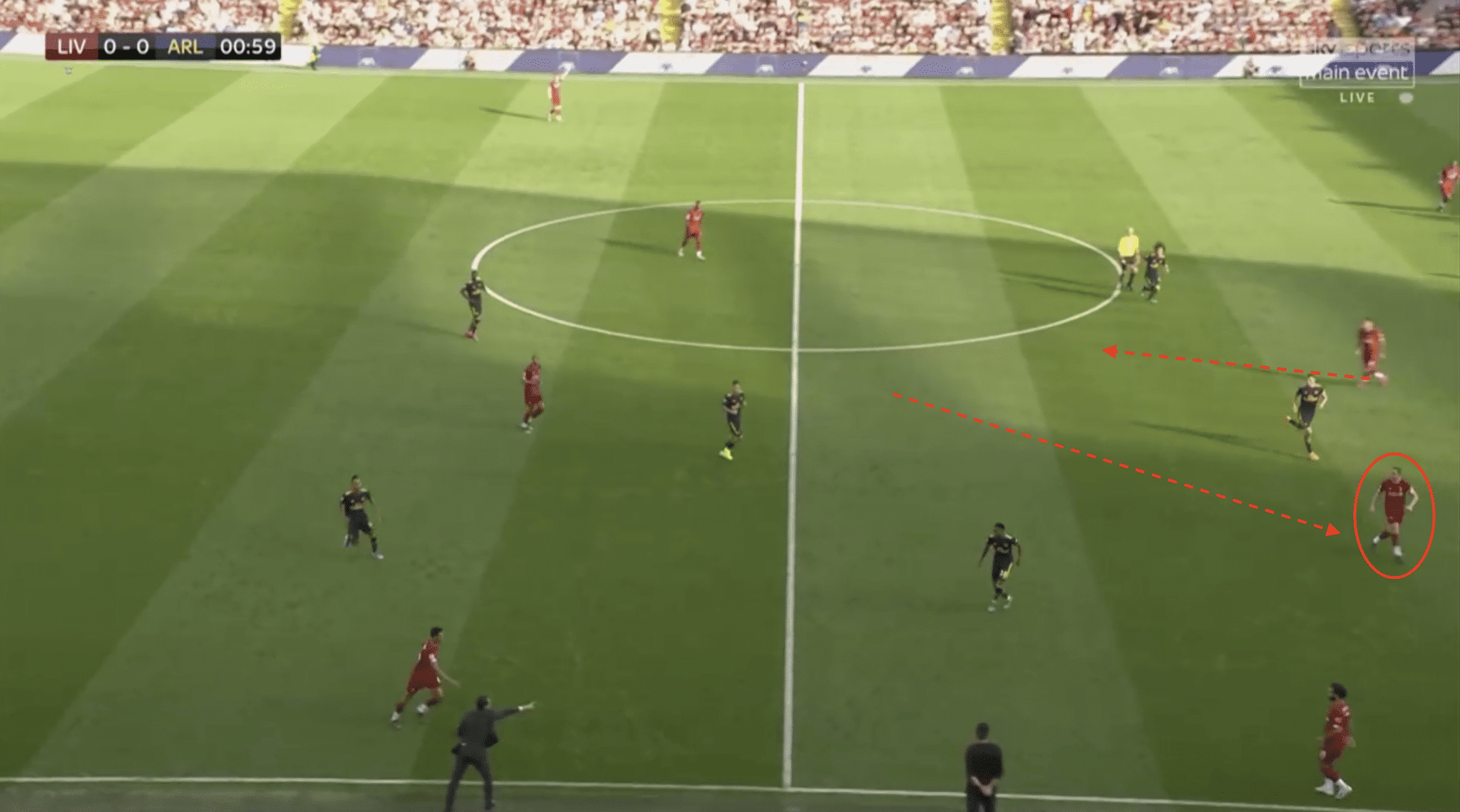 Last season, Alexander-Arnold would have been where Salah is positioned and one of the midfielders would have attempted to build from the back. This time around, it's different.

Salah holds his position on the touchline. Henderson makes a run forward from his midfield role. And Firmino drops to occupy the space created by the skipper.

The Reds had a plan from the off and intended to stick to it. But after realising Arsenal had done the unexpected, Klopp reacted.

In this instance, several managers would stick to their guns and assume their one tactic fits all approach is good enough to ensure maximum points.

The charismatic German, however, isn't quite as naive. Far more pragmatic than many of his peers, Klopp tweaked Liverpool's system so that it was more reminiscent of their 2018/19 style.

This proactive approach changed the game for Liverpool and allowed them to pin Arsenal back. With acres of space down either flank, Alexander-Arnold and Robertson switched from wide midfielders to wingers. 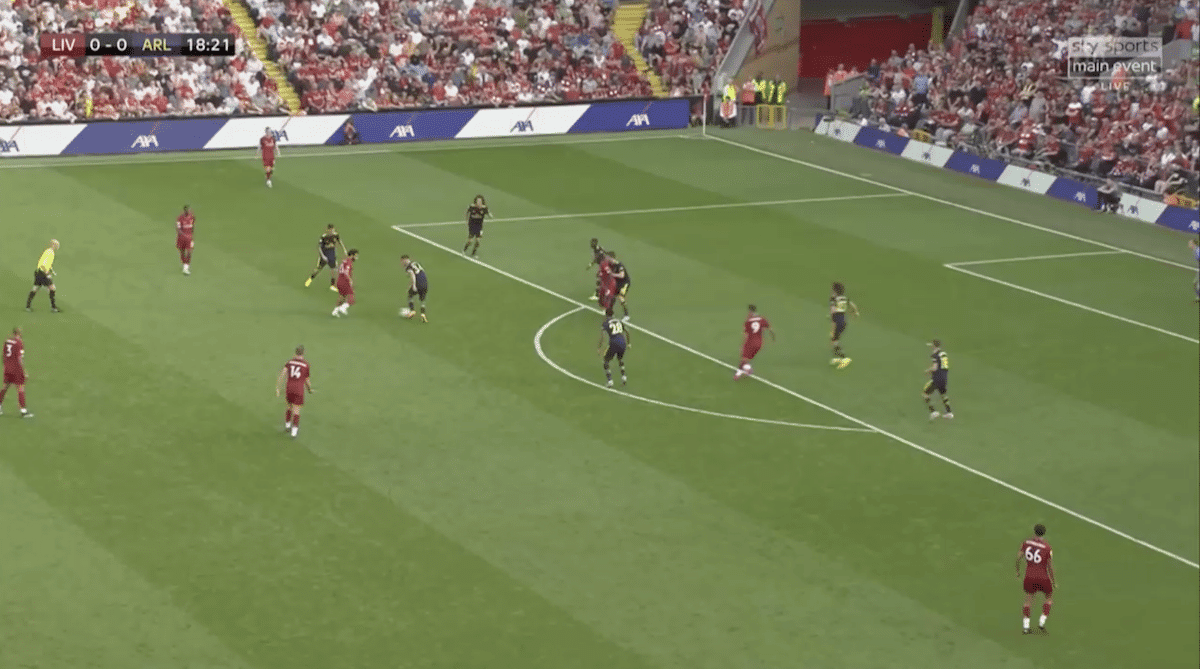 It's by design the Liverpool No.66 finds himself alone on the right. Arsenal are narrow and compact, primarily because the diamond shape doesn't allow for wide areas to be covered.

It was Klopp's decision to move his wide forwards into central areas and to have his full-backs pushing on. And Alexander-Arnold's advanced positioning played a part in an early Mané chance.

Alexander-Arnold pressed Dani Ceballos, cut off the angle to pass down the line and forced him inside.

The Spanish playmaker attempted a switch of play but the ball only reached Mané in the penalty area. His effort was saved but the tweaked tactics had quickly paid off.

The penalty incident doesn't come about without the switch, either. 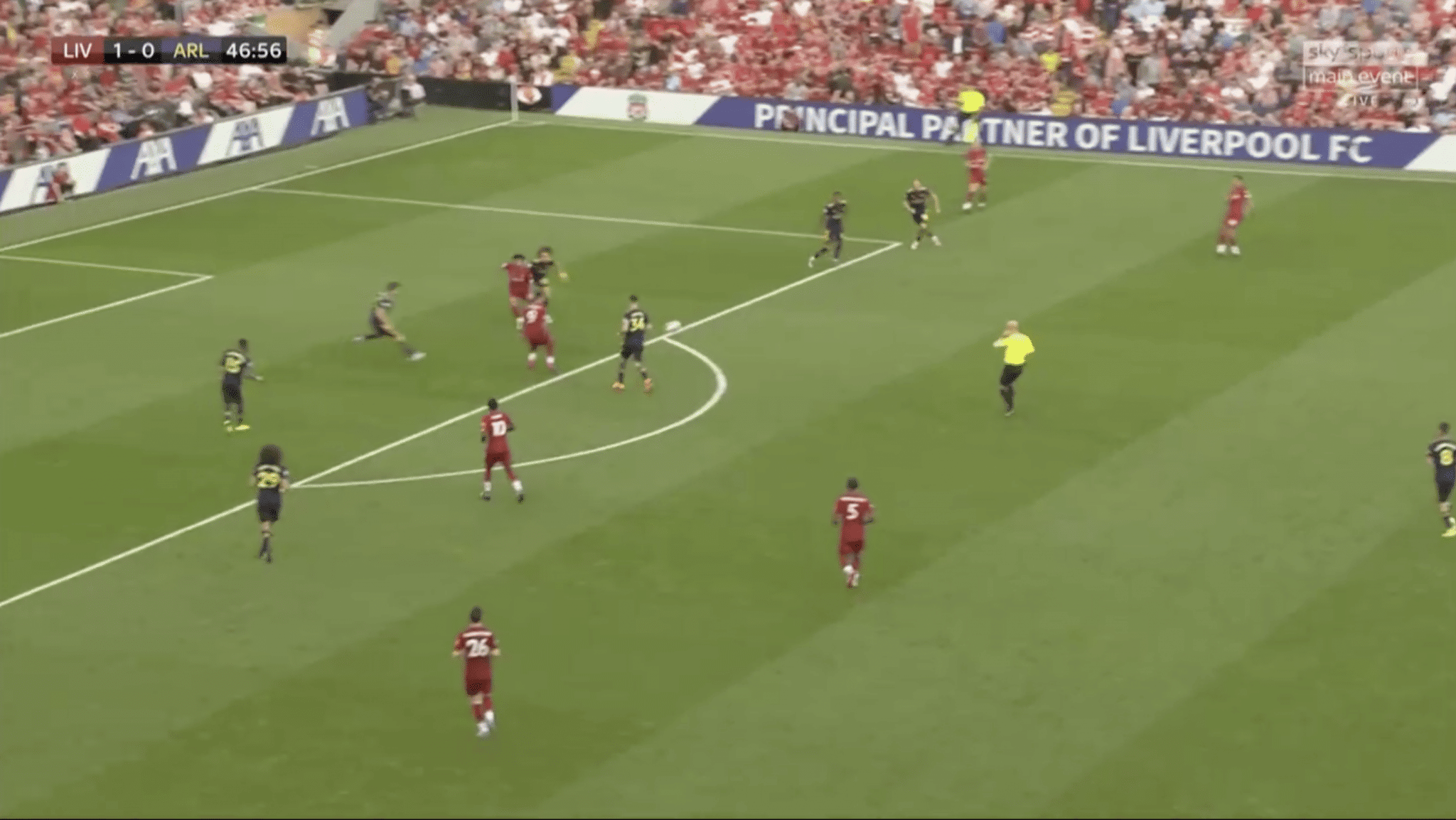 The Liverpool right-back is again high up field. It's Henderson overlapping and keeping the width, which in turn allows Salah to drift inside.

Here, the Egyptian positions himself cleverly next to David Luiz. Firmino is able to drop off into the space caused by Salah's movement, as he always does, and is able to receive the pass from Alexander-Arnold.

Granit Xhaka, who did well to keep the central zones clogged up, doesn't react to Firmino entering a pocket of space and in the blink of an eye, Arsenal find themselves facing a spot-kick.

The combination play around the area isn't anything new if you're a Liverpool fan. You've seen it for the best part of three seasons. What deserves praise, however, is Klopp changing things around so quickly to make the most of Arsenal's decision to vacate the wide areas.

This proactive approach won Liverpool the match. It also now gives opponents something to think about when facing the Reds.

Compress the centre of the pitch and the full-backs can cause damage. Look to force Klopp's men central and Salah and Mané have the quality when isolated in wide areas to cause chaos.

One system, two variations. Both just as effective.