Sometimes it's just too little too late. Loris Karius‘ impressive form in recent weeks has seen fans soften their stance on the need for a new goalkeeper at Anfield. There's been a noticeable difference in Liverpool as a defensive unit compared to earlier in the season when Simon Mignolet was keeping goal.

Reports in the Daily Mirror, however, claim the Reds are still in the market for a new keeper in the summer window. Roma stopper Alisson was rumoured to be a top Liverpool transfer target but the report names Jack Butland as the man Jürgen Klopp wants to bring in as his new No.1.

It's not the first time the 25-year-old has been linked with a move to Merseyside. In December, in a Football London exclusive, it was revealed Butland wanted to move to Anfield, ahead of Chelsea and Arsenal, to link up with Klopp.

It contradicts Paul Joyce of the Times who recently named Alisson as the goalkeeper the Reds had settled on. The Daily Mirror claim Butland’s Premier League experience swayed the decision as they look to become realistic title challengers next season and revealed the Liverpool owners are prepared to sign off on what would be a world-record fee for a goalkeeper.

Furthermore, Butland's experience in the English top flight shouldn't sway the decision in his favour. Not when Alisson has starred for Roma in the Champions League and keeps Manchester City star Ederson out the Brazilian squad.

With this in mind, we've compared Butland to Karius, Mignolet and Alisson to see how he stacks up.

Would Butland be an upgrade?

It's worth noting here that stats aren't the best way to judge goalkeepers. However, some can be used to help paint a picture. For example, the expected goals against (xGA) stat looks at the number of high-quality chances a team has conceded and gives it a number. If a team is conceding fewer goals than their xGA then either the opposition are wasteful or they've got an outstanding goalkeeper.

It's no coincidence Manchester United have conceded 12 goals fewer than their xGA when they have arguably the best goalkeeper in the world playing for them in David de Gea. This is a stat to take notice of. 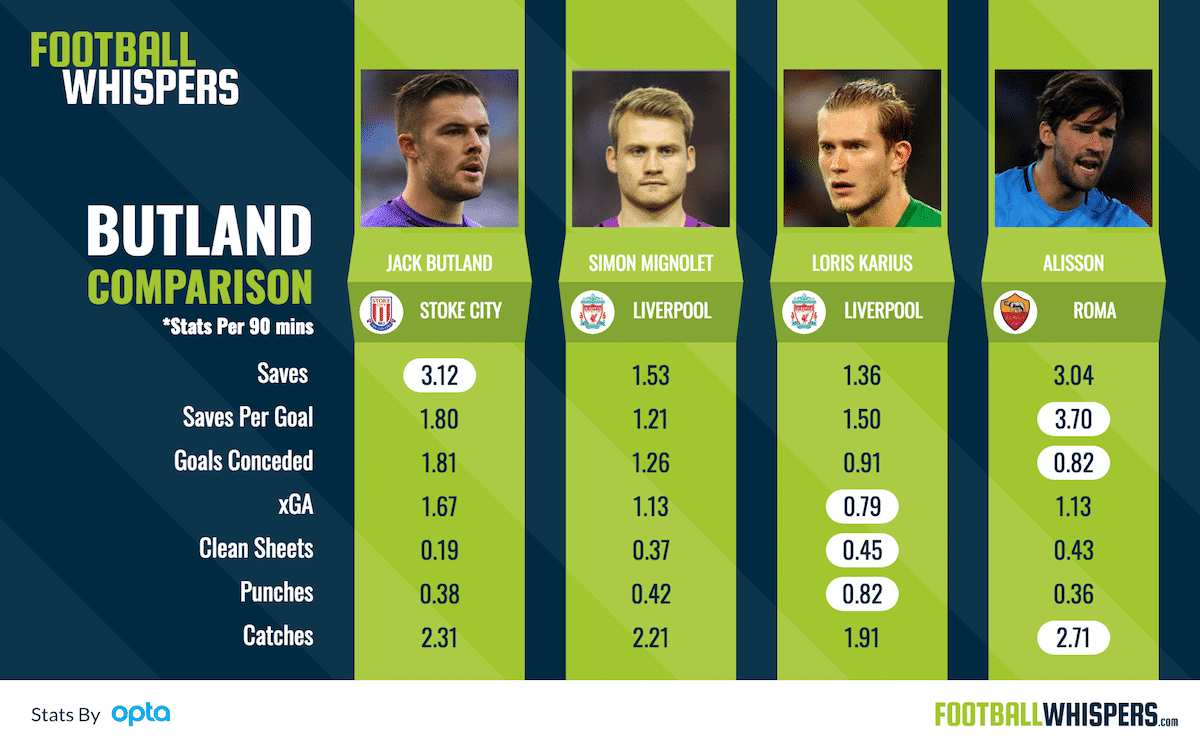 Butland, as you can see in the graphic above, wouldn't be an upgrade on Mignolet – let alone Karius – or as a rival to Alisson. He's playing for a team in the relegation zone so it's inevitable he'll be busy. The fact he's making the most saves per 90 comes as no surprise.

When looking at saves per goal he's only behind Alisson but, again, context is needed. He's making 1.8 saves per goal, 0.59 more than Mignolet and 0.30 more than Karius. But he's facing double the amount of shots the Liverpool keepers are per 90.

Alisson, meanwhile, is 3.70 saves per goal, 100 per cent more than the Stoke keeper, despite making 0.08 fewer saves than Butland per 90 minutes.

The key stats in the graphic are goals conceded and xGA. The best stoppers concede fewer goals than their xGA. Butland concedes 0.14 more per 90 minutes than expected of him. He's a busy goalkeeper but he's not, normally at least, making world-class saves he shouldn't be. Not like Alisson who concedes 0.31 fewer goals per 90 minutes than his xGA suggests he should be. 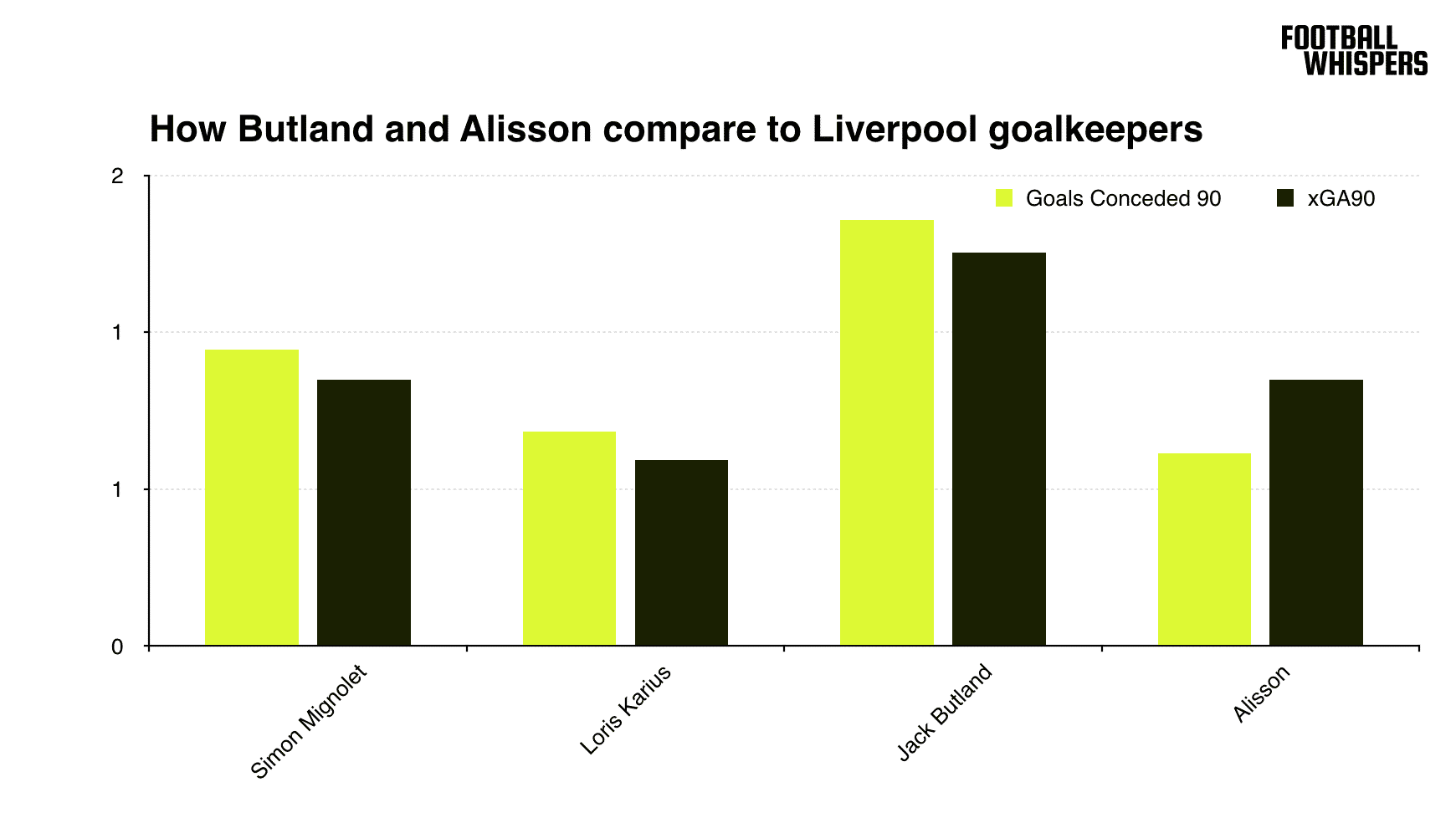 Over the season it means Butland has conceded close to four goals more than he should have while Alisson has prevented nearly seven. And the excuse that the Brazilian has a better defence doesn't stand up when the respective teams have an xGA90 of more than one.

When looking at the current Liverpool goalkeepers on the graphic, it's noticeable the xGA90 with Karius keeping goal is considerably lower than when Mignolet starts.

The Reds are better defensively with the former Mainz man in goal, with their xGA 0.34 down on when Mignolet starts, but the difference in terms of goals conceded to xGA is minimal.

And this is without taking into account distribution. Karius' use of the ball has resulted in Liverpool creating a number of chances over recent weeks while Mignolet was often criticised for slowing the play down. Alisson, as you'd expect from a Brazilian, looks comfortable when in possession of the ball and is always looking to get Roma onto the attack.

It's hard to judge Butland on his distribution because a lot of it will be down to managerial instruction. Stoke boss Paul Lambert may want Butland to go long to make the most of Peter Crouch in the air so it's rare you get to see his short game.

He rarely leaves his penalty area but that doesn't mean that he can't. That's always something to take into account when analysing a goalkeeper. It's a role with very little creative freedom.

On a recent Anfield Index podcast, former goalkeeper David Preece gave his thoughts on the Stoke City No.1: “Jack Butland would be a good signing (for Liverpool).

‘He deals with crosses well and his kicking is effortless. But the injury came at a real bad time for him.”

As a shot-stopper, the stats won't give fans much confidence that he's an upgrade on what's already at the club. As a ball-player he's an unknown quantity. At £40million he would be a massive gamble, one that Liverpool shouldn't need to take in their position.