Liverpool as a club have got into the habit of getting involved in long, drawn-out transfer sagas.

Liverpool eventually struck a deal with RB Leipzig on the August 28 to bring to an end five months of negotiations. Keïta is set to move to Merseyside in July. Talks with Southampton, meanwhile, hit a brick wall in June after claims of an illegal approach for van Dijk.

However, the Dutchman moved to Anfield on New Year's Day meaning the ten months Liverpool put into the deal weren't in vain.

Two sagas down, one to go.

Coutinho is still a Barcelona transfer target. The La Liga leaders did their best to unsettle him during the summer but Liverpool held firm and rejected three bids for their Brazilian maestro, even though their No.10 put in a transfer request.

The back injury which kept the 25-year-old out of action at the start of the season subsequently cleared up and he returned to the Liverpool starting XI, with Klopp even making him the captain on occasion. It appeared as though he was knuckling down and was on course to have his most productive season in red.

But now the January window is open and Barcelona are up to their old tricks. Nike accidentally posted on their website that Coutinho's move to the Catalan-based club was official and even had merchandise available. It was quickly removed but the damage was already done.

And now, reports have emerged once again claiming Coutinho wants to join Barcelona in January even though he'd be cup-tied for the Champions League. He'd be prepared to sit out playing in Europe's elite competition to get his dream move.

Melissa Reddy of Goal.com revealed Liverpool's stance has softened and that they'd be open to parting ways with the Brazilian if a reasonable offer was lodged. In a way it mirrors how Southampton acted with van Dijk and it now feels almost inevitable that Coutinho will become a Barcelona player.

The bigger club were always going to get their way but it was about the smaller one making a statement.

In this scenario it's Liverpool who are behind Barcelona in the food chain, at least in the eyes of the player wanting to make the move.

While clubs can never improve if they're forever losing their best player, fans of the Merseysiders shouldn't be afraid to cash in on their No.10, not if the stats from this season are anything to go by. 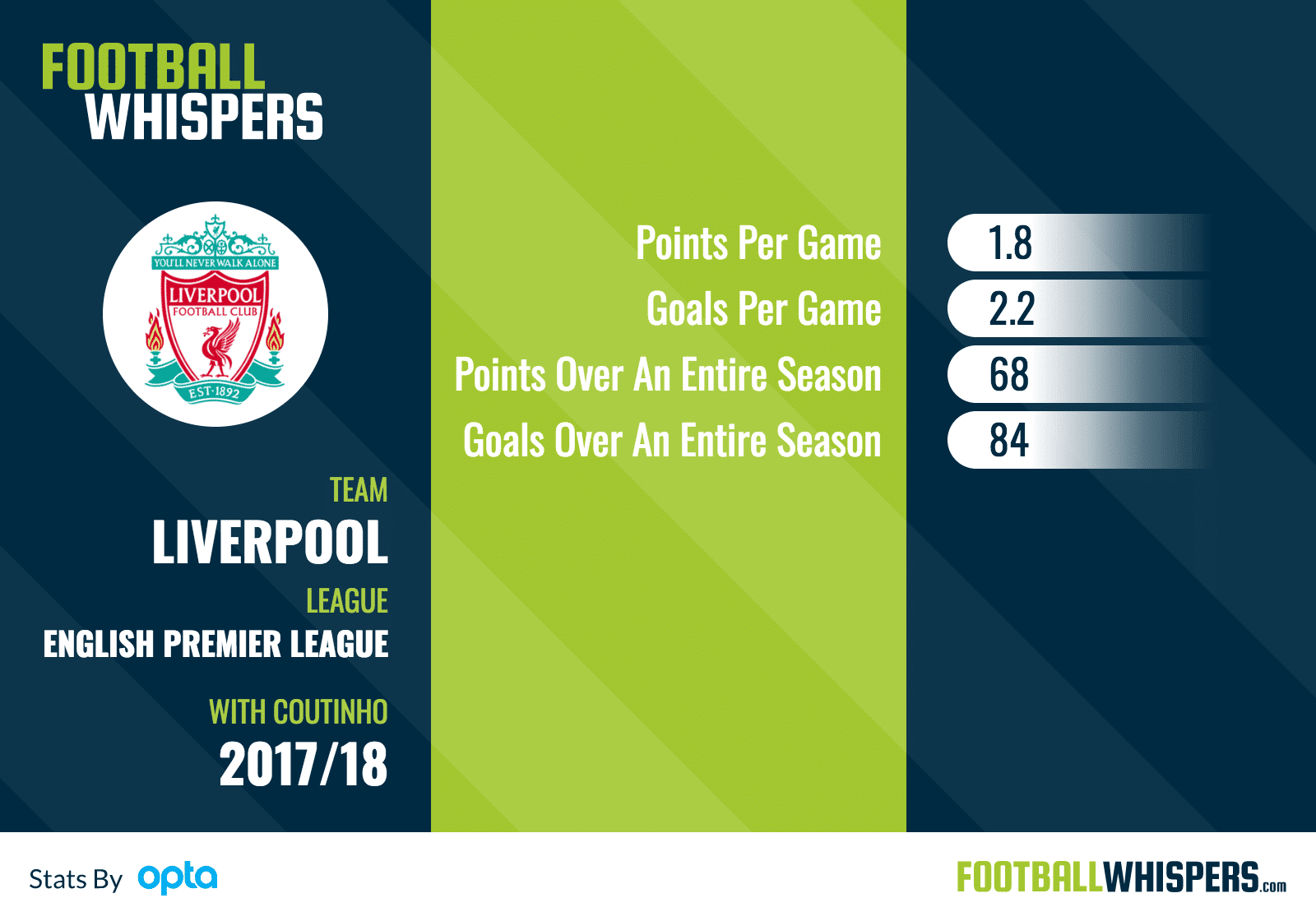 Coutinho is having the season of his career and it's going somewhat under the radar due to the form of Mohamed Salah coupled with how he acted during the summer transfer window.

Throughout his time at Anfield there have always been question marks over his consistency, or lack of it. However, this term he's scaled new heights. He’s currently involved in a goal every 70.5 minutes, netting every 120 minutes and managing to grab an assist every 171 minutes.

We may only be in January, and he may have only started 13 Premier League matches, but this is the sort of consistency many have yearned to see.

As a result, Liverpool are averaging 1.8 points and 2.2 goals in the games he starts. However, when you really look at these stats it's a bit of an eye-opener.

Over the entity of a 38 game season that averages out at just 68 points – good enough for seventh last season – but they do score an impressive 84 goals.

Furthermore, in matches against those rivalling the Reds in the top six, Liverpool have picked up just three points from a possible 12 when he starts, scoring five goals in the process. 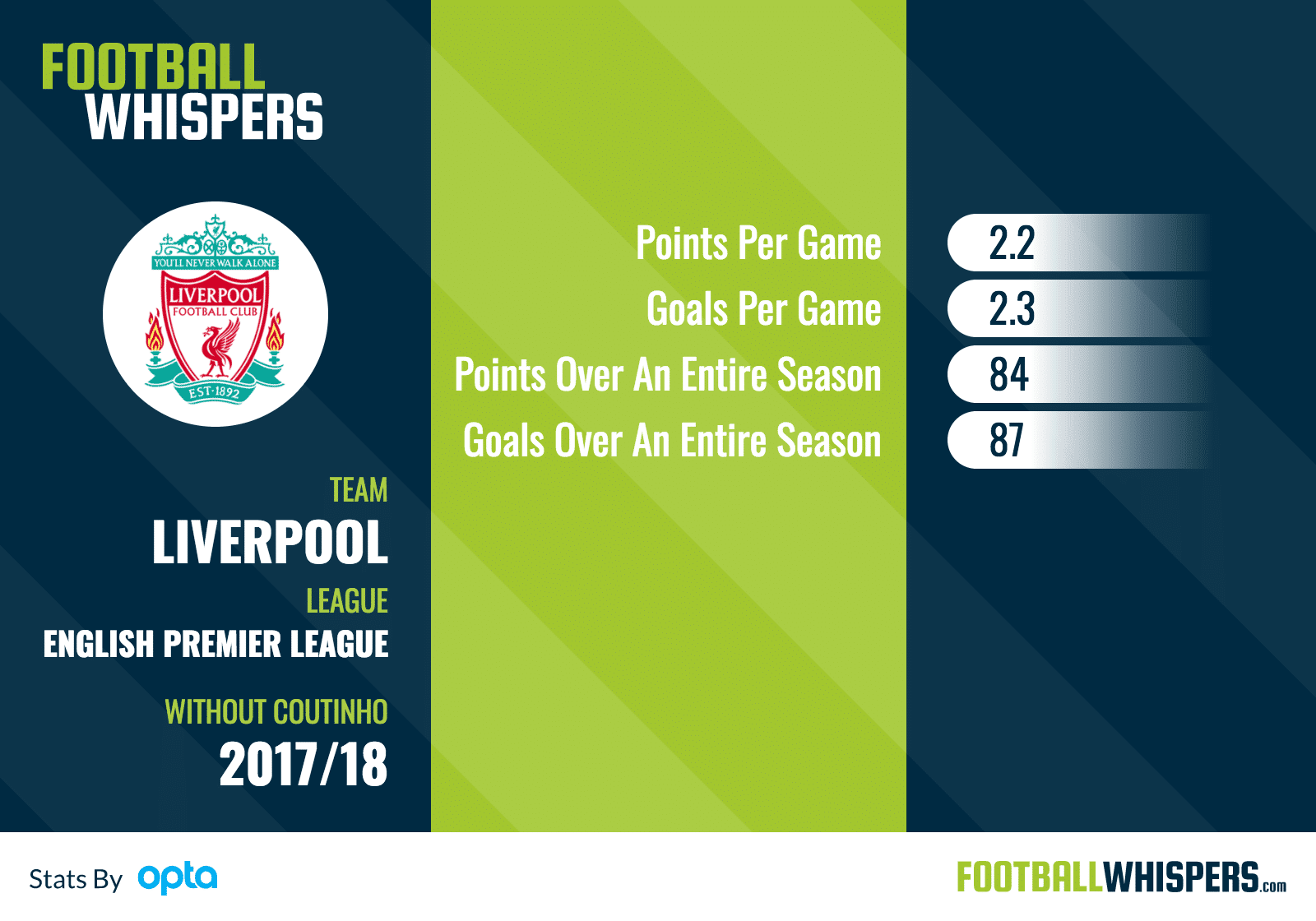 The sample size without Coutinho isn't large by any stretch of the imagination. There's just nine games in the Premier League this season that Liverpool have fielded a starting XI that doesn't include their No.10.

The stats, though, make for interesting reading. Liverpool have a better points per game average (2.2) and also score more goals (2.3) without Coutinho. Over an entire season that averages out at 87 goals and 84 points.

Such a points tally last season would've earned you a runners-up position and it would've been enough to see Liverpool crowned as champions during the 2015/16 season.

In the two matches they've played against sides from the top six they've picked up three points – the 4-0 win over Arsenal back in August. So, two fewer matches yet same points tally and same amount of goals scored.

Of course, context is necessary and no two games are ever alike, but it's interesting nonetheless.

Many might claim the opposition Liverpool have faced without Coutinho isn't the best; Watford, Crystal Palace, Arsenal, Manchester City, Huddersfield Town, West Ham United, Stoke City, Everton and Burnley – but West Ham, Crystal Palace and Burnley all took points off Klopp's men last season yet it's nine points from nine this time around.

So it's not all doom and gloom as you might have imagined.

That's not to say Liverpool should sell Coutinho but if they invest wisely and add more quality to the squad then it increases the chances of the Reds having the ability to beat more teams and actually challenge for the so far elusive Premier League title.