Reigning European champions and current table-toppers in the Premier League, Liverpool have arguably been the best team in the world since the turn of the year.

As far as projects go, few look as attractive as the one at Anfield. It’s why talk of moves for Kylian Mbappé and Jadon Sancho are no longer laughed off.

But, in what would be a very Liverpool move, Ryan Fraser could well be the forward the recruitment team sign to bolster Jürgen Klopp’s attacking options.

The Bournemouth attacker is out of contract next summer which means he’s available for a bargain fee in January and reports have recently emerged to suggest he’s a target for the Premier League leaders.

James Pearce, Reds reporter for The Athletic, has quashed links to the 25-year-old but it’s unlikely the club would admit their interest in a player with the transfer window not opening for another six weeks.

On paper, a move for the Scotland international would appear to be an underwhelming one. But some of Liverpool’s best business in recent years has, at first glance, been underwhelming.

Andrew Robertson’s arrival from Hull City wasn’t a statement signing. Alex Oxlade-Chamberlain divided the fanbase because of the fee paid to secure his services from Arsenal. These just two examples, but there are many more.

Fraser could be the latest to fall into that category. By no means a star name, the Scot's exploits last season resulted in interest from Arsenal. The former Aberdeen winger managed 14 assists in the Premier League, just one shy of Eden Hazard. He also chipped in with seven goals.

It meant throughout the 2018/19 campaign, Fraser was involved in a goal every 151 minutes in the English top-flight, and he had a hand in close to 40 per cent of Bournemouth's goals. 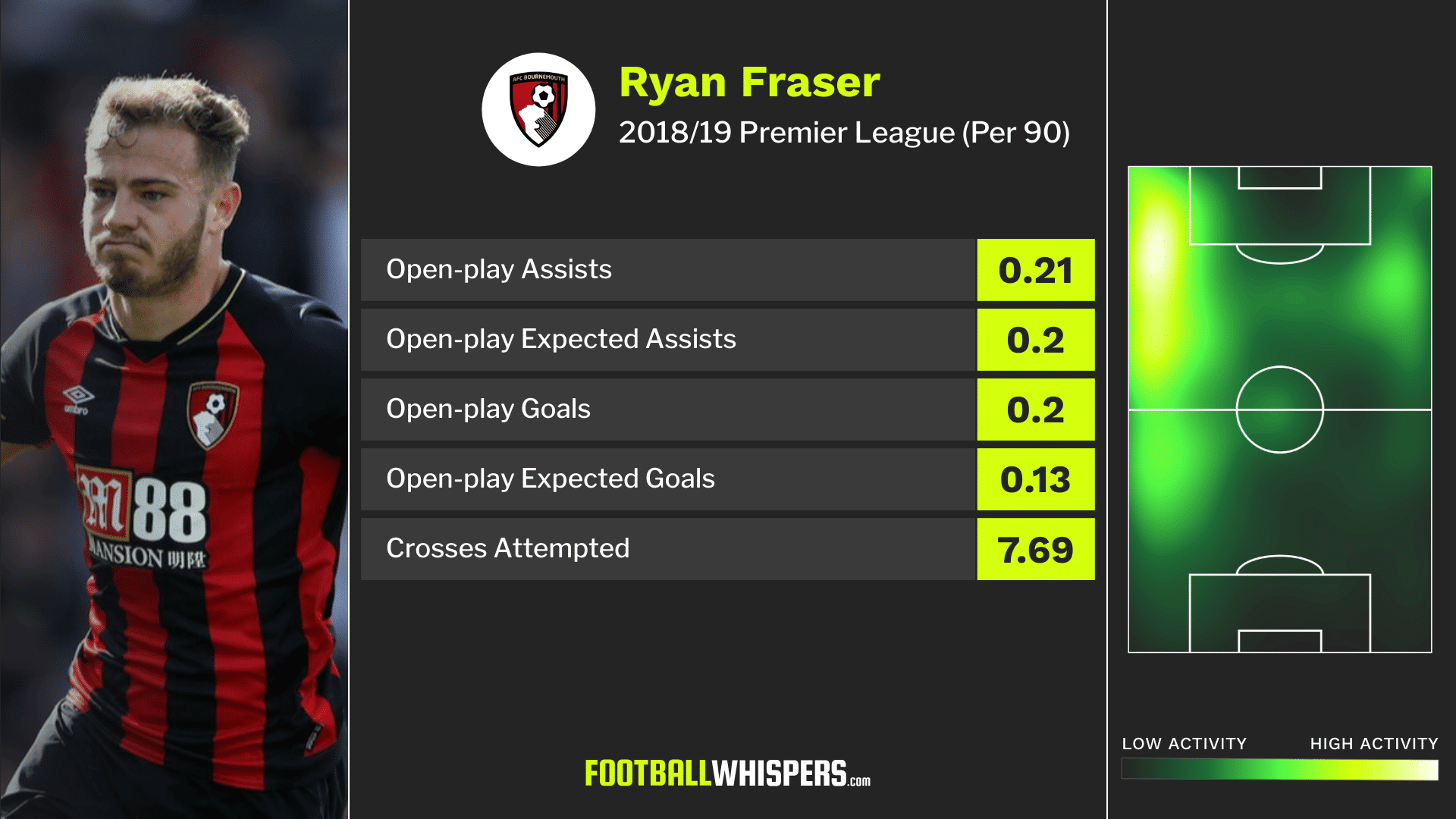 Fraser is unique in many ways. He's got traits associated with a more traditional winger, the pace and the positioning near the touchline, but it just so happens he's a right-footer playing on the left. He tends to want to cut back onto his favoured side but he can beat opponents on the outside and his left foot isn't just for show.

He's direct and incisive while also being measured and composed. At times, the former is linked to chaotic and transitional players while the latter are skills needed to play a more possession-based style. But Fraser's explosiveness allows him to combine the two.

He can breeze past players and wriggles out of tight situations. What first looks like a crowded area quickly turns into a situation that sees Fraser in space. It's in these moments he's able to show his composure and ability on the ball, feeding considered passes into the area instead of just lumping crosses into space and hoping for the best.

Fraser isn't a dribbler. Last season he completed just 0.68 per 90 and that average is at 0.45 this term. He doesn't need to be at his devastating best. Instead, he's like Andrew Robertson. The Scotland international powers into the final third and then looks to get the ball into the penalty area. If he was left-footed, Fraser would be good back-up for the Liverpool left-back. In many ways, he still could be.

The Reds played James Milner at full-back for an entire season. While he can use his weaker foot, he tended to cut infield whenever possible and Klopp's side still made it work. Fraser would obviously have to get used to seeing more of the ball to play that role, though. Liverpool's No.7 is a central midfielder by trade so was used to being heavily involved in possession. Fraser is a winger who deals in moments.

There's nothing to suggest the Bournemouth man couldn't adapt and embrace a more possession-based role. And if he did, Liverpool would have a player who could fill in for Robertson as and when needed without losing the drive down the left. Milner's played there at times this season and the difference is noticeable.

In theory, Fraser could also play right-back in certain matches once he's up to speed with the demands of that role in a Liverpool system. He also gives Liverpool more options in the final third, given he can play either flank. If reports are accurate and Xherdan Shaqiri does want to leave for first-team football then that void in the squad needs to be filled.

Shaqiri has had his moments in red but it just hasn't worked out for him at Anfield, not properly. If Liverpool are able to effectively swap Shaqiri for Fraser then it could prove to be yet another shrewd bit of business by Michael Edwards and the recruitment team.