Liverpool are like an orchestra without a conductor. They’re capable of putting on a show but they struggle to know when to increase the tempo and when to slow things down. They simply lack a player who has the ability to dictate the pace of the game and create a rhythm for the team to play to.

Jürgen Klopp does it on the sidelines but they need someone on the pitch to do it.

Currently, the Reds are like a ship without a navigation system. They know what they’re meant to be doing and where they’re supposed to be going but they don’t have the tools to get there. This isn’t news to many, it’s an issue that pre-dated Klopp’s time at Anfield.

At times it’s mistaken for lack of leadership. But the real issue in this Liverpool squad, the one that’s stopping them being title contenders instead of top four hopefuls, is he dearth of creativity in the middle third.

This isn’t a knee-jerk reaction to Monday's 1-0 loss to Swansea City. Those results happen and in isolation they’re nothing more than frustrating. The Reds may have only suffered one defeat in 19 but they’ve drawn games this season they’ve dominated.

As Dan Kennett points out on Twitter, last season Liverpool’s six losses came against teams who started the day, on average, in 17th position. Burnley, Bournemouth, Swansea, Hull City, Leicester City and Crystal Palace all managed to defeat Klopp’s men and, with the exception of Bournemouth, they're all teams  who sit deep, sacrifice possession and instead look to dictate what space Liverpool can and can’t attack.

Carlos Carvahal touched upon this tactic in his post-mach interview: “I said to my players that Liverpool were a top team, they are really strong, but they are a Formula 1 car. If you put a Formula 1 car in London in traffic, the Formula 1 car will not run very fast,” Carvalhal told Sky Sports.

“That is exactly what we had to do to play against Liverpool – stop them playing the way they like. We had the fortune to score and after that, playing against a strong team, we held on.”

It’s been a similar story this year. The losses have turned into draws but the fact remains, Liverpool struggle to beat teams who slow the game down. Everton, Burnley, Newcastle United and Chelsea all snatched draws against Klopp’s men despite offering very little attacking threat.

Swansea suffocated Mohamed Salah at the Liberty Stadium and the Egyptian attacker had just one good chance all game. Sadio Mané huffed and puffed but couldn't find a way past the home side. Roberto Firmino had a golden chance to grab an equaliser but his headed effort smashed the post.

All three are special players but they all need space to really do damage. Philippe Coutinho was perhaps the only player in the Liverpool team who could influence the game against the Burnleys and Swanseas of the league.

He broke the deadlock against Newcastle earlier on in the season and had a hand in the opener against Leicester City in the 3-2 win. It was the Brazilian maestro who threaded a pass into the path of Salah in the build up to the second goal in Liverpool's 3-0 victory over Southampton.

He was, at times, the difference maker. That's not to suggest he was a skeleton key for matches against these teams, they struggled even with their former No.10 pulling the strings, but Liverpool stood a better chance of picking up all three points with him in the team than they do having £140million sitting in the bank.

With Coutinho it was an issue, without him it's a problem.

The Reds have lacked a playmaker and a tempo setter for far too long. During the 2013/14 season they had Steven Gerrard playing deep with Coutinho as a midfielder. Before then it was Xabi Alonso but the Spaniard left the club in 2009.

Liverpool's need for a playmaker

Klopp is a believer that gegenpressing is the best playmaker. And the Liverpool manager has a good point. It was evident during the 4-3 win over Manchester City that, when the game is stretched, having players who understand how and when to press created good opportunities. But Pep Guardiola's men are one of a few clubs in the Premier League who do look to be expressive.

How useful is a counter press when you're seeing 70 per cent of the ball? It's in those games you need a genuine playmaker. A player with the ability to play an incisive pass or pick the ball up in a deep area and dribble past players. The sort of thing that stretches the opposition.

Not only that, though, they need someone to keep the ball moving quickly in the aforementioned matches, but then someone who can slow the play down and put his foot on the ball in the games against Arsenal and Man City. They need an intelligent player in the middle third who knows when to take the sting out of the match and when to inject some purpose to the play. 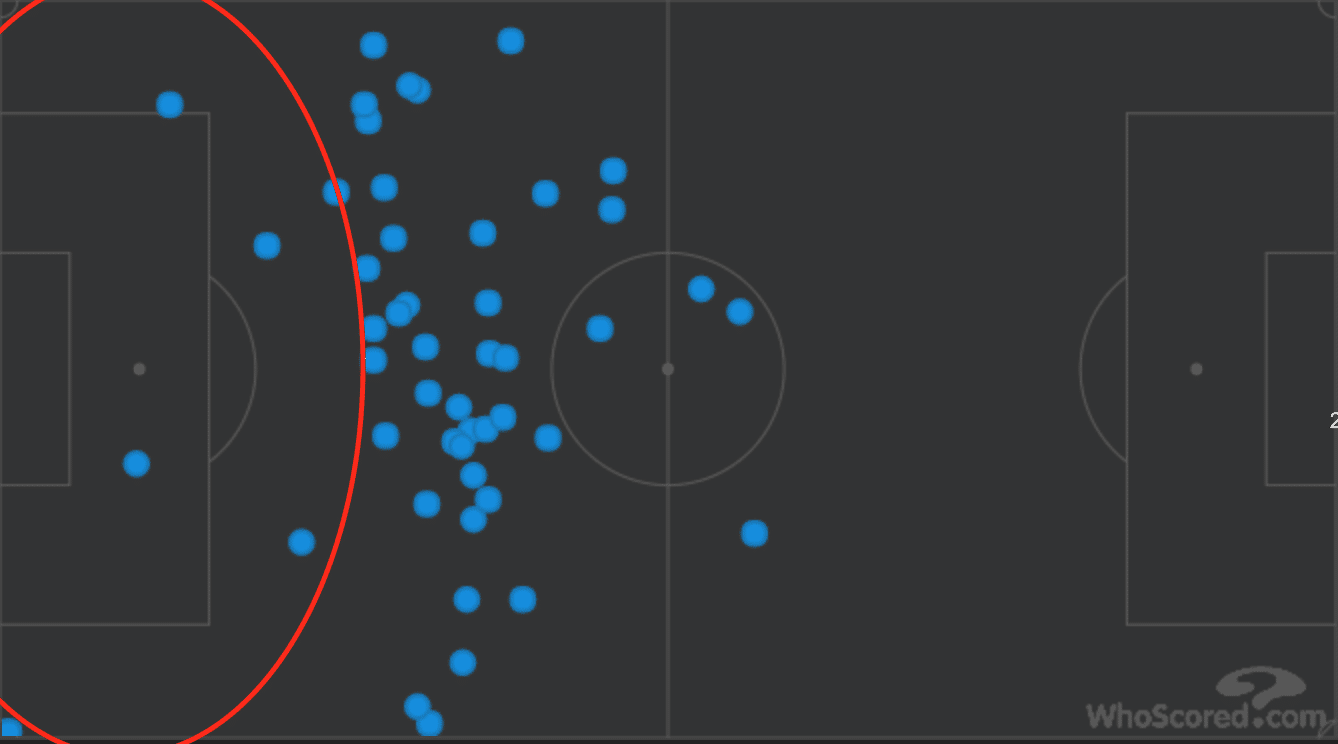 The graphic above, courtesy of Whoscored.com, is the pass map in the opposition's half for Alex Oxlade-Chamberlain, Emre Can and Gini Wijnaldum. The trio completed just five dribbles between them, too. It's as though they hit a brick wall 30 yards from goal. Against deep sitting teams you need your midfielders to get in and around the penalty area to drag the opposition out of their shape.

These aren't mythical players, either. They do exist. It's one of the reasons Klopp and the club tried so hard to bring Naby Keïta to Anfield during the summer before eventually settling on a deal for the 2018. What doesn't make sense is the club's reluctance to not spend big, with money in the bank, to bring the Guinean midfielder to the club this month.

RB Leipzig are in a position of power and are rightly asking for a big payday to release Keïta six months early. But Liverpool could pay what the Bundesliga club wanted. Yes, they would look weak, but does it really matter right now?

A player of his quality could be the difference maker. The match winner. The game changer. With places for a top-four finish so tight you pay whatever is necessary to give you the best chance of getting Champions League football.

Thomar Lemar is another long-term Liverpool transfer target but, as we exclusively revealed, Klopp is reluctant to spend big on him when he's not 100 per cent behind a move this month, fearing a poor start to life at his new club could see him miss out on a World Cup place.

Liverpool and City play a similar style and while the Reds have a forward line that can go to to toe with the Citizens, there's a difference in class in the middle third. Guardiola noted the importance of having creative players in the middle third early on and moved Kevin De Bruyne and David Silva there.

Those two players are considered by many to be the up there with the best in the league and it's why City have failed to score in just one match this term. They can blow teams away but also have players who can pull the strings in games that the opposition look to slow down.

There are 14 games left in the Premier League this season and most of those will be against teams who will give up possession just to set camp up outside their penalty area. Not bringing in a conductor could see the team fall flat in these matches could be something The Reds look back on in June and regret.