In some cases it can be easy to draw parallels between clubs who play their football in different nations and leagues across the globe – Manchester City and Paris Saint-Germain are famed for their big-spending philosophy and Middle-Eastern ownership, while Southampton and Scottish side Hamilton Academical have won plaudits for their commitment to youth and impressive academy systems in recent years.

If you’re looking for clubs that mine the lower leagues for talent then Peterborough United and Dagenham & Redbridge spring to mind, whereas Real Madrid and Salford City are perhaps more prone to ‘Galactico’ signings at their respective levels.

The one club that everyone wants to be compared to at the moment are Liverpool, with fans of teams around the world casting envious glances in the direction of Jürgen Klopp’s men since the German coach was appointed in 2015.

His arrival on Merseyside has seen Liverpool transformed into a side that plays a scintillating brand of high-octane ‘heavy metal football’, signing some of the brightest talents in the game and reaching two European finals in the process.

So which lower division side could be considered comparable to the current golden boys of the Premier League? We take a look at one National League club who might just fit the bill.

At first glance Leyton Orient might not seem an obvious candidate to be held in the same esteem as five-time European Cup winners Liverpool. But a closer look at the east Londoners reveals a number of similarities between the Reds and the promotion chasing O’s …

Liverpool are undoubtedly a club on the up, looking to reclaim their spot at the pinnacle of the world game after a number of years in the footballing doldrums. Their golden era came in the 1970s and 1980s, winning eleven league titles between 1972 and 1990, as well as four European Cups and a whole host of other trophies in that period.

By their own high standards success has been in short supply ever since – incredibly, the Reds are still yet to win a Premier League title since its inception in 1992 and have lifted the Champions League on just one occasion. 2010 was a low point for the club, with American owners George Gillett and Tom Hicks leaving Liverpool with an estimated £350million of debt, prior to a recent upturn in fortunes under the current stewardship of the Fenway Sports Group. 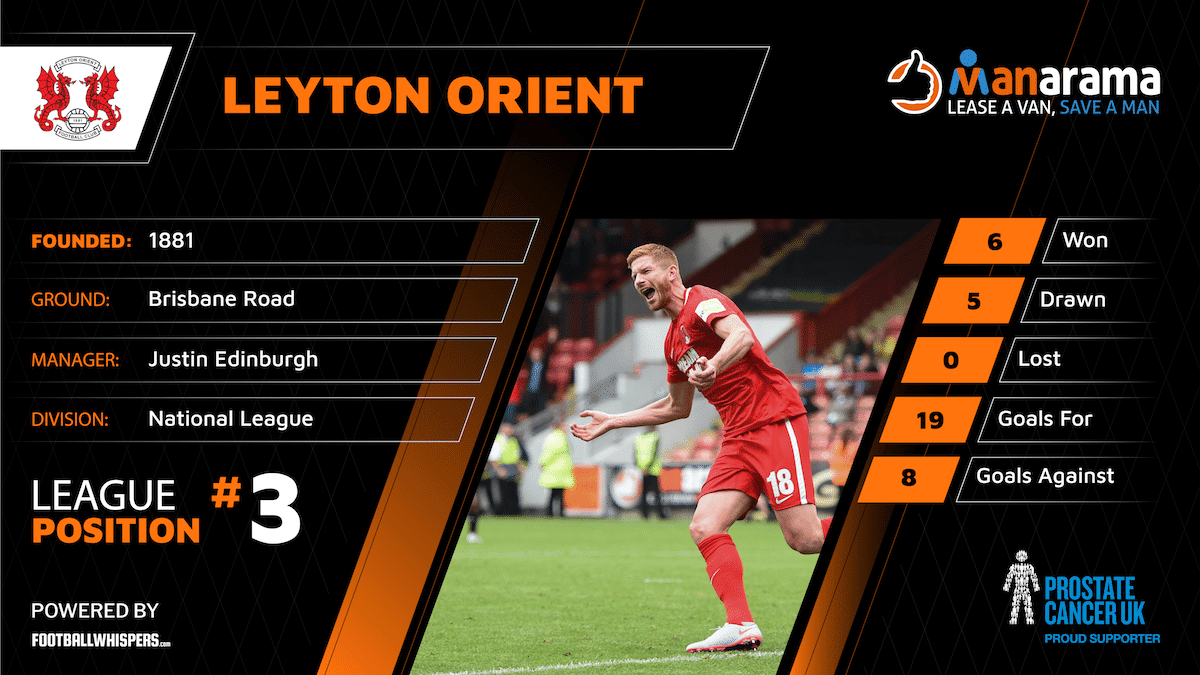 Leyton Orient have also been trying to recapture past glories, ever since they enjoyed significant success in the 1960s and 1970s. The O’s spent 20 seasons in the top two divisions of English football between 1955 and 1982, including a promotion to the top flight in 1961/62.

Recent years have been less fruitful – the club were relegated to the third tier in 1982 and have never returned to the upper echelons since. Much like Liverpool, Orient hit rock bottom while the club was being run by unpopular owners – Italian businessman Francesco Becchetti oversaw a disastrous era that saw the O’s fall from League One playoff finalists to the National League in the space of just three years.

In another similarity, the club were eventually rescued by an American-based consortium, who have returned Orient to a firm financial footing and are providing the funds to challenge for promotion back to the EFL.

Both Liverpool and Leyton Orient have made impressive starts to the season. The Reds are second in the Premier League on goal difference (having won all five of their matches to date), while Orient are third in the National League – two points off the summit and unbeaten in 11 matches.

The ‘goals for’ column also provides a hint about the two clubs’ playing styles. Both are the second highest goal-scorers in their respective divisions, reflecting the swashbuckling tactics employed by Klopp and O’s manager Justin Edinburgh.

There are also parallels between the make-up of both clubs’ squads. Liverpool’s first team was packed full of quality last season, but needed greater squad depth in order to be able to challenge Manchester City for the Premier League title this time around.

The club’s owners put their hand in their pocket over the summer and signed an array of talent – from Swiss wing wizard Xherdan Shaqiri to Guinean midfielder Naby Keïta – providing Klopp with the ability to name a strong substitutes bench and rotate his starting line-up when necessary.

Similar transfer activity took place at Brisbane Road during the off-season, with Orient adding to their squad in a couple of key positions that were lacking in quality during the previous campaign.

This newfound depth was evident during Saturday’s 3-1 victory over form side Barnet, when Edinburgh was able to call on substitutes James Alabi and Dale Gorman mid-way through the second half. The new arrivals from Tranmere Rovers and Stevenage completely changed the game, transforming an evenly matched encounter into a convincing win for the east Londoners.

Much of Liverpool’s success so far this season has been down to a combination of the solid and the spectacular. While Mo Salah is the talismanic forward grabbing all the headlines, the continued reliability of experienced campaigner James Milner has at times been just as crucial to the Reds’ fortunes.

The same can be said of Leyton Orient, with frontman Macauley Bonne drawing plaudits for his goal-scoring prowess, after finding the net on five occasions this season. However it is the experience of Jobi McAnuff – now 36 – that has been vital to the O’s fast start to the campaign. The former Premier League winger’s metronomic playmaking ability has played a key part in their 11-match unbeaten run during August and September.

Liverpool are widely regarded as being amongst the best supported clubs in the world, enjoying home crowds of over 50,000 people and generating a spectacular atmosphere on European nights at Anfield.

While Leyton Orient’s attendances are less than ten per cent of that number, they are the third best supported team in the National League, drawing average gates of over 4,500. The atmosphere inside the historic Brisbane Road can also be electric, especially for fixtures under floodlights and when rivals Southend United come to town.

The case for the O’s…

Whether it is on the pitch or in the stands it’s hard to ignore the parallels between Leyton Orient and Liverpool. Similarities in the playing squad and both clubs’ recent pasts suggest that if you’re after a National League team who mirror Liverpool’s footballing philosophy, Brisbane Road is the place to go.