Anfield under floodlights is quite the spectacle. Some of the club's greatest nights have taken place in this environment. However, on Saturday evening the crowd were deprived of seeing the football they'd come to expect over the years.

VAR helped with the scoreline but not with the free flowing, high-tempo football fans witnessed against Manchester City in the last home outing. If it's going to be used on a regular basis then it needs to be fine-tuned. The referee added just four minutes on in the first-half despite the four goals and at least six minutes of stoppage because of VAR being used.

However, the biggest problem against West Bromwich Albion was the aerial assault that highlighted the problems in this Liverpool team. No, it wasn't the away team looking to bully the Reds' brittle defence. Instead it was Jürgen Klopp's men who reverted to a route one approach.

Liverpool attempted 41 crosses against the Baggies. The Anfield faithful regularly fear an aerial bombardment with many still unconvinced by those starting in defence. Perhaps this stat, the one that shows the Reds are out of ideas, is the scariest.

Their average for the season is 20 crosses per 90 minutes. Liverpool attempted 100 per cent more crosses against Alan Pardew's men who are famed for their defensive resilience – especially aerially.

West Brom had just 31 per cent possession on Saturday night and attempted 13 crosses. For context, their average for the season is 42 per cent and 21 crosses. Liverpool dominated the ball, as you would expect, but didn't make the most of it. It's becoming a bit of a theme. It showed the team lack patience.

Against Swansea City 11 of their 21 shots came from outside of the penalty area. This time that lack of patience reared its ugly head in crosses from deep areas. 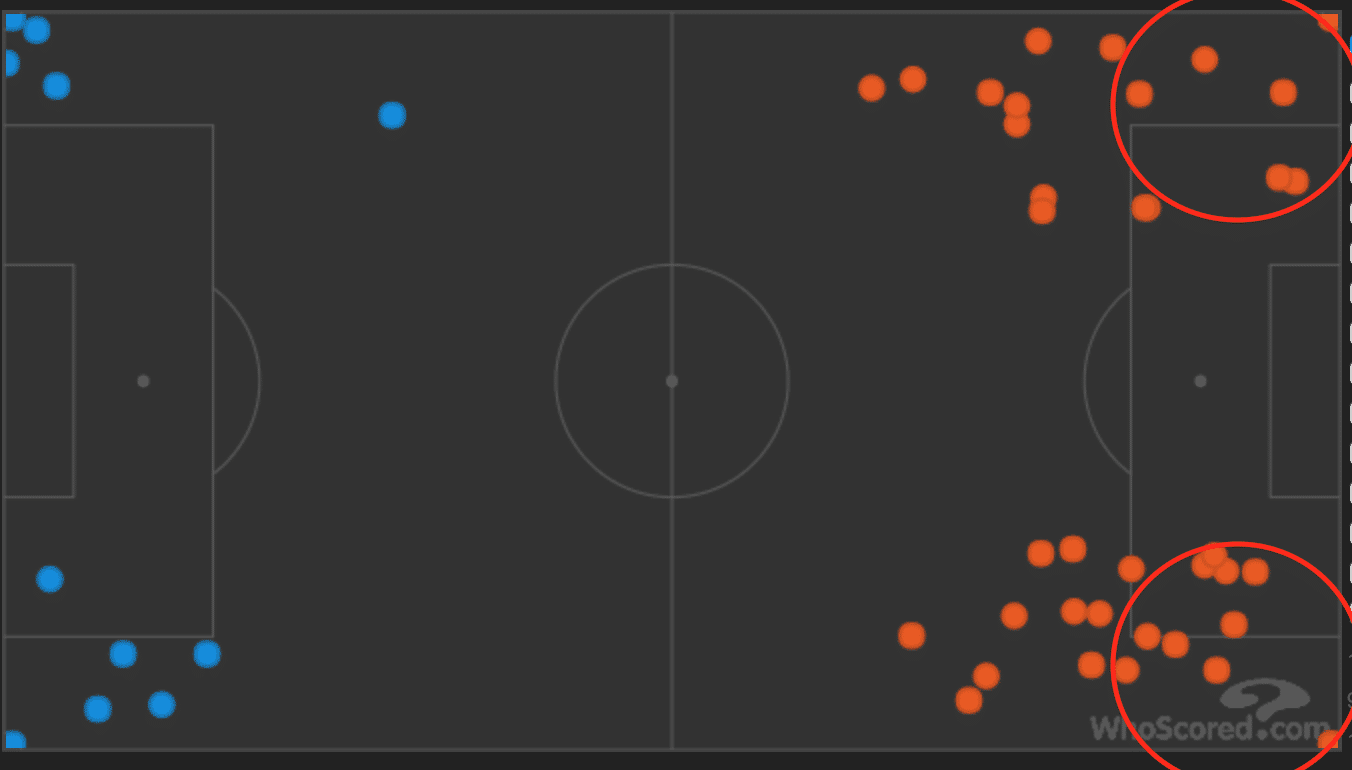 With Liverpool having so much possession it was good to see them attempting to use the wide areas to stretch the opposition. But when you break down the cross map, shown above courtesy of Whoscored.com, you get to see where the problem lies.

The two areas circled in red (above) are where you want the crosses to be coming from ideally. More often than not if a cross arrives from that area it means the attacking team is behind the defensive line and they're running backwards to face their own goal. These are dangerous situations. 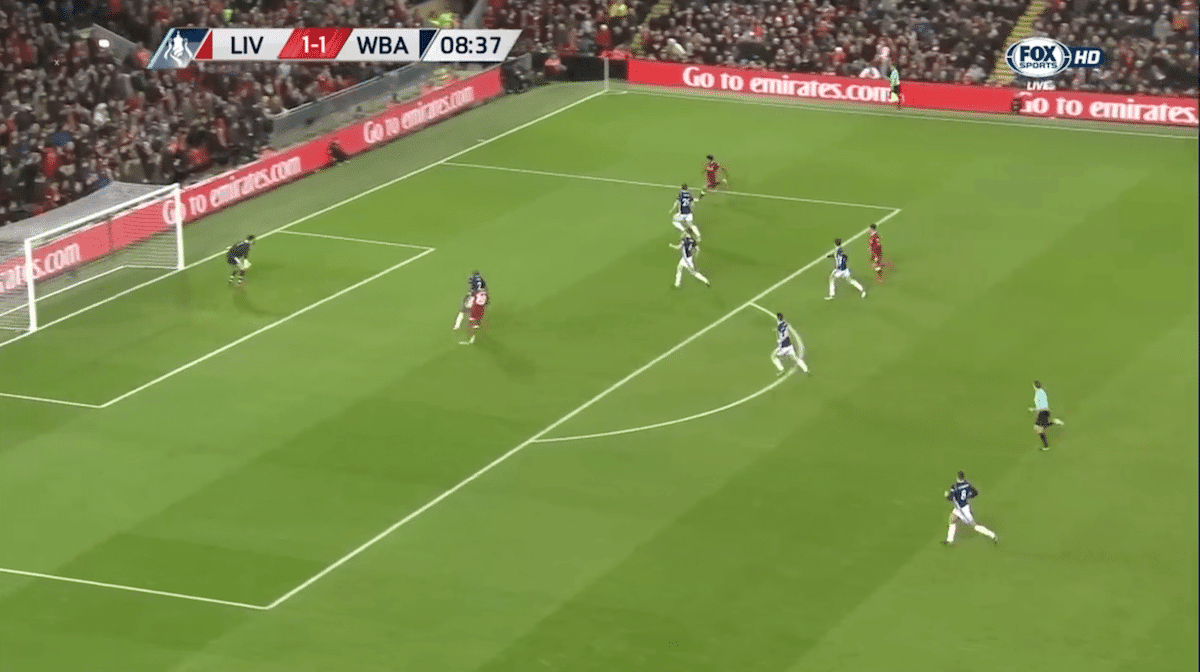 You can see the scenario in the above picture from the match. Liverpool sprung a counter-attack, just as they so often do, and the ball is worked out wide to Mohamed Salah. Sadio Mané is the only player in the penalty area he can aim for, and that's not ideal, but he's one on one with Allan Nyom in the middle.

Salah doesn't have to play a perfect pass. He just needs to get it in the general direction of the Senegalese speedster and there's a chance he puts it away or it takes a deflection off of the West Brom full-back and leaves Ben Foster stranded. 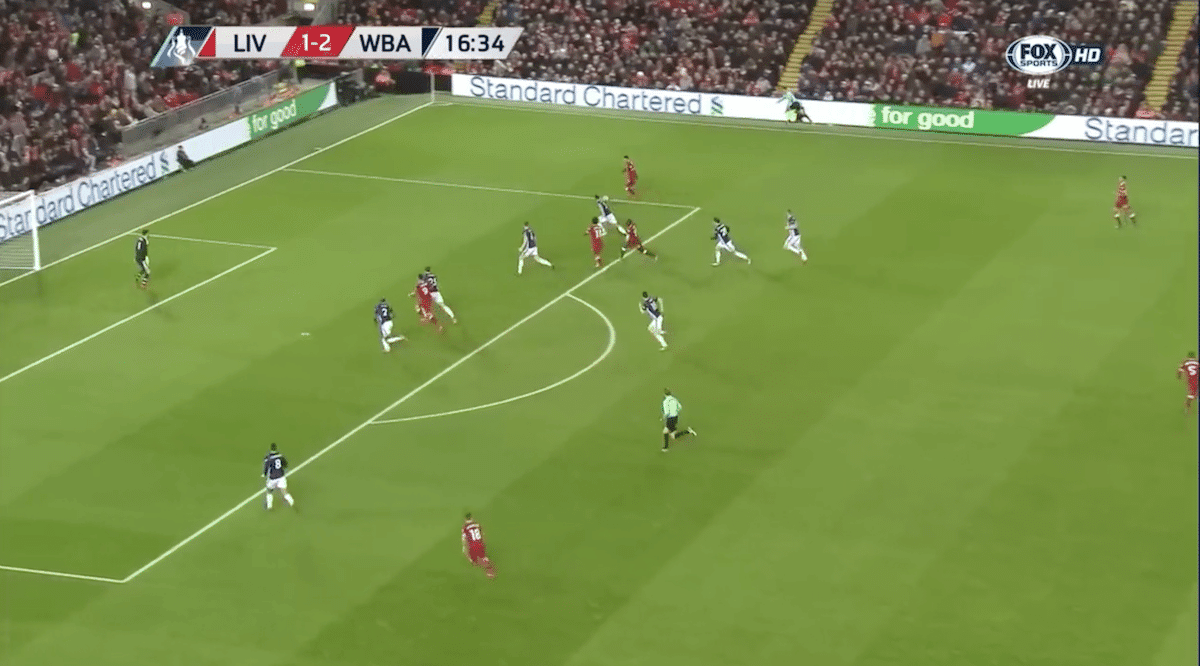 In the picture above you see another well worked opportunity for Liverpool. The Reds get the ball out to Alex Oxlade-Chamberlain and the former Arsenal man has a number of options.

He could drive it low across the face of goal with Roberto Firmino closing in and two West Brom defenders sprinting back towards their own goal. All it would take is a ricochet and it could end up anywhere.

Alternatively he could attack the space ahead of him and wait for Mané and Salah to join Firmino in the middle before driving it in low. As you can see in the Whoscored graphic, however, only 14 crosses came from the circled areas.

The rest came from deeper areas. If they're coming from such positions on the pitch then, more often than not, that means the opposition have bodies back and can comfortably deal with anything coming their way. The play is ahead of them, exactly where they want it to be 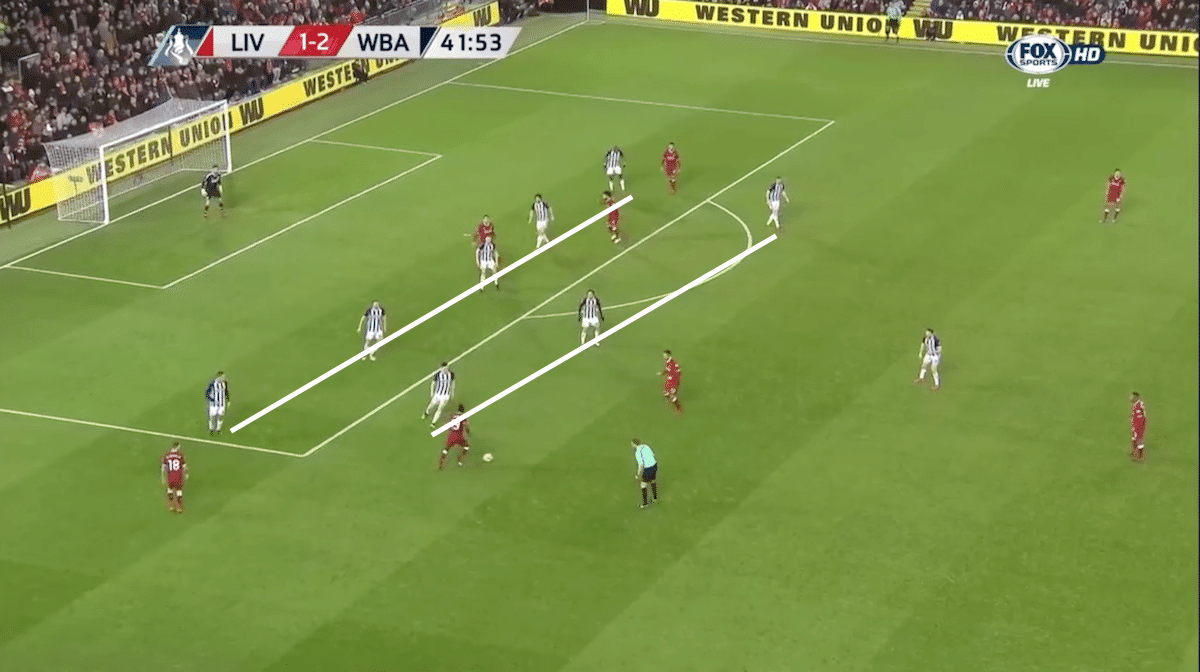 You can see exactly that in the picture above. Liverpool have slowed play down and West Brom have eight men behind the ball. The away side have narrowed the pitch and the Reds resist the opportunity to exploit the space down either flank.

Mané, the man in possession, cuts inside onto his stronger right foot and floats a cross in. It's comfortably headed clear. A switch of play to Trent Alexander-Arnold could would have stretched the play instead. 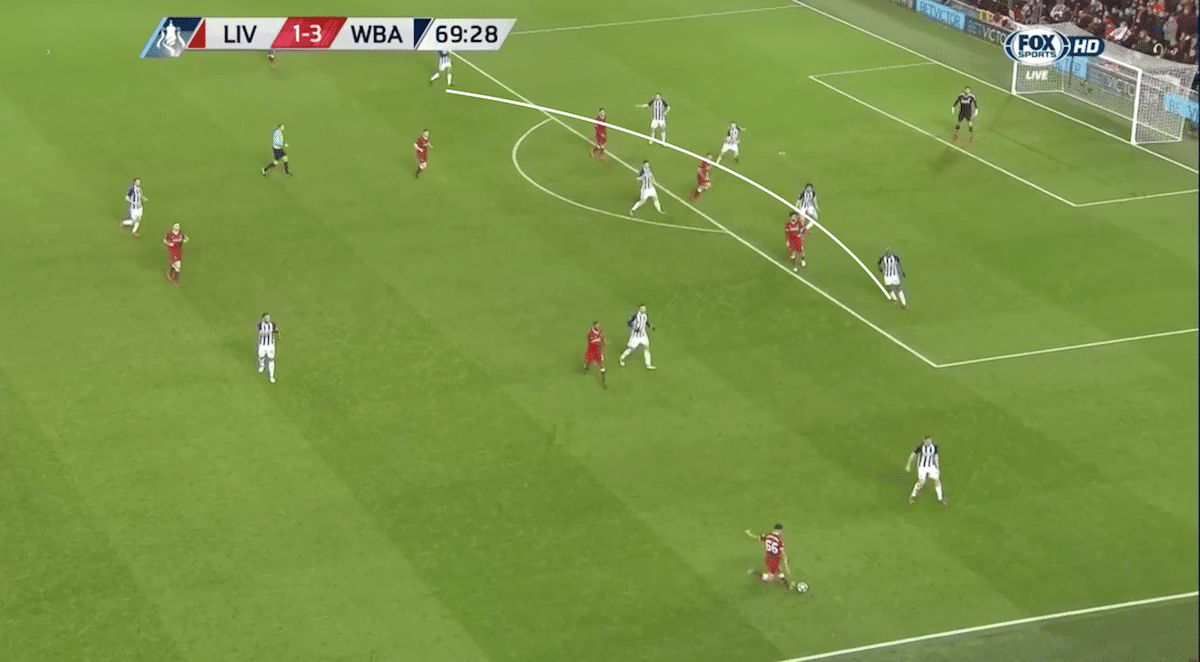 Here you see the Liverpool right-back attempting a cross from a deep, wide position. It's one that Foster races out to catch and the pressure is immediately eased. It's all too comfortable for the Baggies.

If the Reds believe the crossing route is the way to go against the teams who sacrifice possession then they need to sign players suited to the style. It's not a one size fits all situation. The same XI who blew Manchester City away in what was a clinic on gegenpressing can't be the same XI to play in a team pumping balls into the box at any given opportunity.

This might not be Klopp's design but the club haven't been able to sign any creative midfielders this month. Without creativity in midfield the temptation will always be to start putting aimless crosses into the area as frustration gets the better of them. It's a vicious cycle and one that won't stop until signings are made.

It's not a game in isolation, either. In eight of their last 11 matches they've attempted over 20 crosses. Liverpool often dominate the ball but fail to dominate and dictate the space. That's the difference between the Reds and Pep Guardiola's City side.

The Premier League leaders average 66 per cent possession and 19 crosses per 90 minutes. They have more of the ball but attempt fewer crosses. They have players suited to the system they're playing.

They have players capable of unlocking the meanest of defences, it's why they've scored 70 goals in 24 matches. The likes of Kevin De Bruyne and David Silva don't lose their heads. Kyle Walker, a marauding right-back, doesn't rush to get the ball into the area. The £50million summer signing retains possession and City can turn the screw and keep the pressure on.

Liverpool don't need a plan B. They just need players to make the plan A work. Until then they'll be in a sort of limbo. Blitzing those who attempt to go toe to toe with them while struggling against teams who are happy to forfeit possession in exchange for dominating the space. The last few matches can't become the norm if they want to push on for a top-four finish.