Reports on Tuesday evening revealed Liverpool had been scouting FC Rostov striker Sardar Azmoun but sources close to the club revealed to Football Whispers that he's not the only one catching the eye of the recruitment team at Anfield. Cristian Pavon, the 20-year-old Boca Juniors attacker, could be on his way to Liverpool in January.

Such links shouldn’t come as a surprise though, Klopp isn’t a stranger when it comes to signing obscure players.

When at Dortmund he signed a relatively unknown Polish striker from Lech Poznan who went by the name of Robert Lewandowski. That didn’t turn out badly for him. His first signing as Liverpool manager was Marko Grujic from Red Star Belgrade. It’s never been about the name for Klopp, it has always been about the profile.

The Reds manager recently spoke out about the fact the club may be in the market for a wide player in January after the injury to Danny Ings.

“It’s not about about how many strikers. Three strikers is enough, I think. But when Sadio is away we will be without a winger. We do not have many wingers, I would say. Roberto Firmino could play as a kind of a winger which would then just give us two strikers. It is a long way to go from January onwards and that month of January is busy.”

It was those comments that sent the Liverpool arm of Twitter into overdrive. People started to get carried away with the thought of Inaki Williams joining Klopp at Anfield but realistically would the German spend close to £50 million on a 22-year-old. Klopp opting to sign an unfamiliar face to Premier League fans is much more of a possibility. 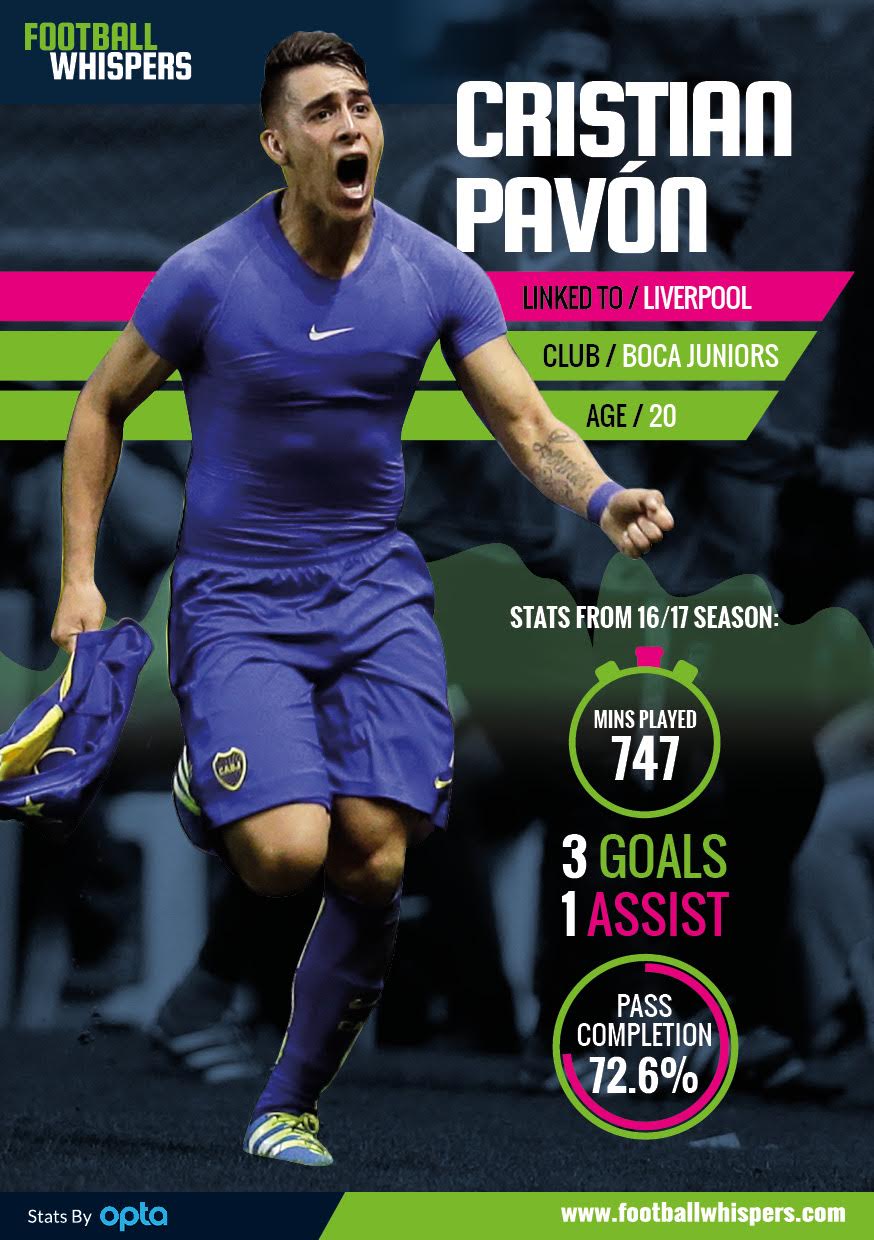 The Argentine giants paid £1.1 million for the youngsters services in 2014 when they signed him from Club Atletico Talleres. He spent time on loan at Colon and it’s only recently he’s got his chance with his parent club. But he’s grabbed that chance with both hands. The wide forward has netted 5 goals in 9 Primera Division games as well as 4 goals in 5 Copa Libertadores matches. He’s the clubs joint top league goalscorer this season and all of this while playing on right of the three in a 4231.

Pavon is your quintessential South American forward. He’s robust, he’s a grafter, he’s a goal threat and he’s got a big game mentality. Think Sergio Aguero, Carlos Tevez and Luis Suarez. He’s by no means in their league quality wise but he’s got a similar profile to the three strikers who have all devastated the Premier League with their style.

Pavon uses his pace and intelligent movement to get into goalscoring positions on a regular basis. Although he starts on the right hand side he spends a lot of his time tucked inside linking up with Carlos Tevez, who plays as a supporting striker, and Dario Benedetto, the man who leads the Boca line. He likes to isolate a target before using his close control and quick feet to get past the player and in the process take him out of the game.

When he gets the opportunity in the penalty area he’s composed. He’s scored a variety of goals from calm placed finishes to tap-ins to emphatically struck shots that he bends into the corner. He’s not reliant on others to create chances and is pretty self sustaining which is key for a striker in the Premier League as some teams like to sit deep and smother the space.

He’s capable of creating something out of nothing and he’s also a bit of a set-piece specialist, something Liverpool are currently without.

He has a killer, big game mentality in spite of his young age and scored against River Plate in the Superclasico. A derby that’s one of the most intimidating and hostile in the world. He’s not overawed by the occasion, if anything it appears to hone his concentration.

His play is very direct and he would, in theory at least, fit in with the likes of Sadio Mane, Philippe Coutinho and Roberto Firmino. He wouldn’t be an identical replacement of Sadio Mane but why would Klopp want someone exactly the same as Mane? A similar skillset gives the Liverpool manager a greater chance to unlock any defence imaginable. He has potential and there’s a lot there for Klopp to work with. For around the €15 million mark he could be yet another shrewd Klopp signing if the club decide to make their move in January.

There's no reason Liverpool fans couldn't end up loving yet another South American striker wearing the no.7 shirt.