Jurgen Klopp set tongues wagging on Wednesday when he openly spoke about highly rated Ajax striker Kasper Dolberg, much to the delight of many Liverpool fans. The German manager spoke to Danish Publication Ekstra Bladet about his admiration for the talented youngster.

The 19-year-old Dane is enjoying his debut campaign with the first-team and to date has 12 goals and six assists in 28 appearances. However, it’s not just the goals and the assists which are catching the eye of onlookers.

It’s his overall game, intelligence and spatial awareness which has many believing he's the real deal.

His seamless transition from youth to first-team football won’t come as a surprise to those connected with the club. John Steen Olsen, the man who unearthed him, has an eye for talent. He’s been employed by the Amsterdam based team for a number of years and has been credited with spotting the likes of Christian Eriksen, Zlatan Ibrahimovic and Viktor Fischer – all of whom are now plying their trade in England.

You can tell he’s an Ajax graduate simply by watching him play. There’s the innovative approach of Dennis Bergkamp in his game, combined with the effortless swagger of Ibrahimovic, and that's meant as a compliment. He’s the sort of player you would pay good money to go and watch in the flesh.

He has the wow factor, which came to the fore against Feyenoord in October.

The match had just entered the first minute of the four added for injury-time. The scoreboard read 1-1 and Ajax were defending. They cleared their lines and manage to play a ball down the line to Dolberg. The striker is more or less on the halfway line with a defender on his back and a few opposition players ready to pounce.

In this situation, many would just bring the ball down and wait for the cavalry to arrive. Maybe even hold onto the ball and look to run the clock down. After all, a 1-1 draw at De Kuip isn’t a bad result.

He drops deep for the ball and uses his heel to lift it over the defender who was looking to pressurise him from behind. It’s not just a random flick, it’s majestic and it’s controlled. The teenager takes the defender out of the game and races into the acres of space ahead of him.

He’s foiled before he’s able to get the shot away but it was a moment of magic. One Liverpool fans would associate with a certain Mr Luis Suarez.

However, unlike so many ‘wonderkids' his feet are planted firmly on the ground and doesn't appear to be getting carried away with his own hype.

It’s understandable why fans might be excited about their manager giving a player of his talent compliments. But does it mean he’ll be playing in the red of Liverpool anytime soon?

On paper Dolberg seems like the perfect signing for the Merseyside club. Both for Fenway Sports Group and for Klopp. He already has the ability to influence a game but it’s his potential which is the real draw.

The 19-year-old could be one of the world’s best and he wouldn’t cost a fortune because, for now at least, the Eredivisie hasn’t been pillaged enough by the big clubs for them to start adding a premium onto their players like so many Bundesliga clubs now do.

Would he fit the Liverpool system?

It would be easy now to reel off names of strikers who have arrived from the Dutch league and failed to bring their form with them; Luuk De Jong, Mateja Kezman and Afonso Alves. He could be one of those or he could be a success like the aforementioned Bergkamp and Suarez. Maybe the next Ruud Van Nistelrooy or Robin Van Persie?

One thing that works in his favour though is his footballing intelligence. The Silkeborg-native knows how to find space when it looks impossible and he knows when to play the ball and when to take it on himself. That's transferable no matter what league you're playing in.

The Premier League is more physical than the Eredivisie but it's irrelevant if he's making the opposition chase a ghost.

It's his movement which makes him a good fit to this Liverpool side. The Reds have found success this season due to the rotisserie of movement they have in the final third with Sadio Mane, Adam Lallana, Philippe Coutinho and Roberto Firmino. Dolberg would just add to that.

He's better in a central area but he's comfortable working the channels. The element of surprise works in his favour too. He's just as likely to dribble past you in the final third (he completes 1.9 per 90minutes which puts him just behind Mane and Coutinho on 2.4) as he is to fire in a shot from 30-yards.

For those interested, the Danish international, averages 2.9 shots per game which puts him just behind Firmino (3.1) and Coutinho (3.2) but ahead of Mane (2.2). 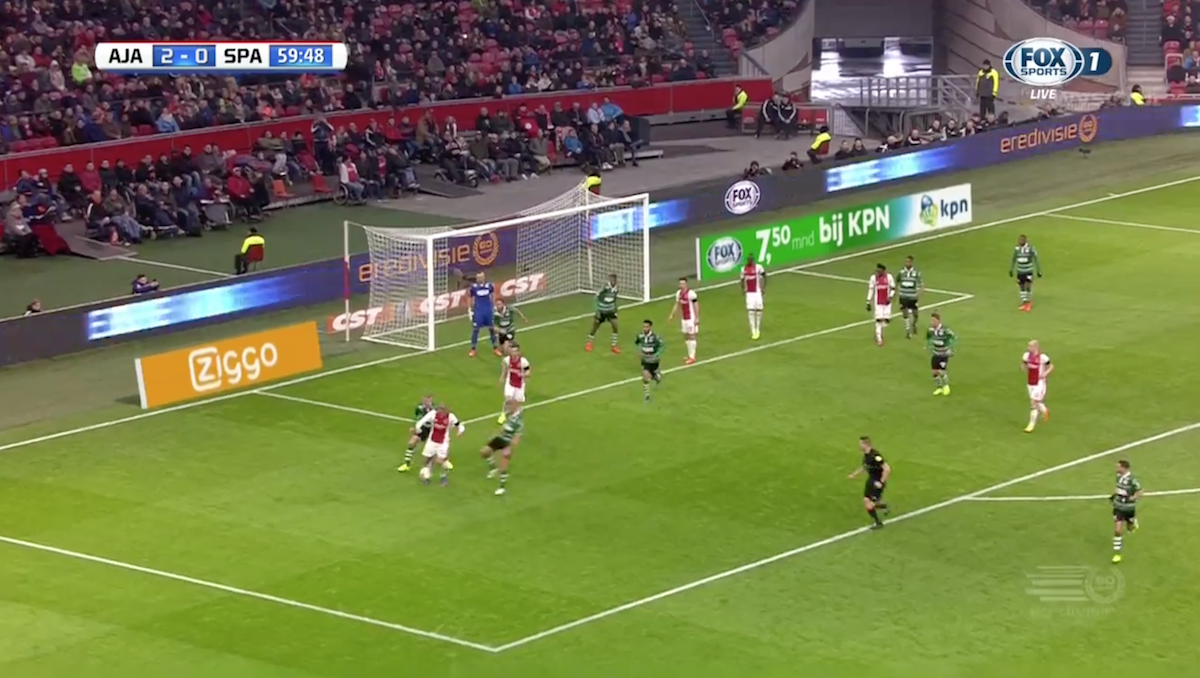 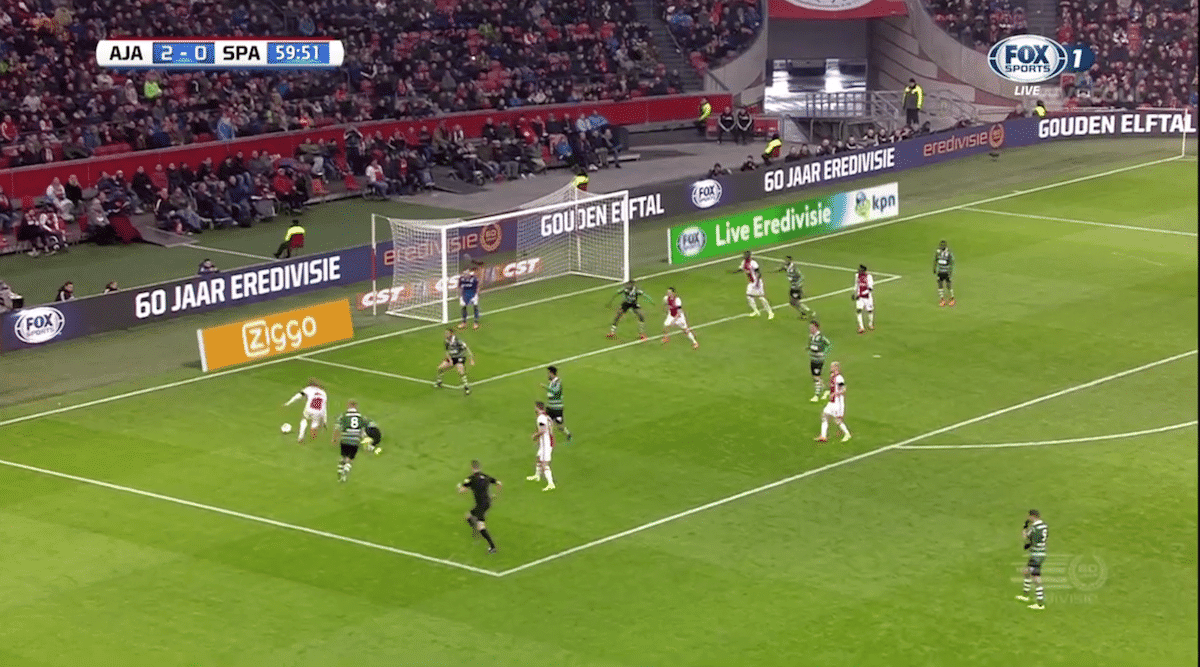 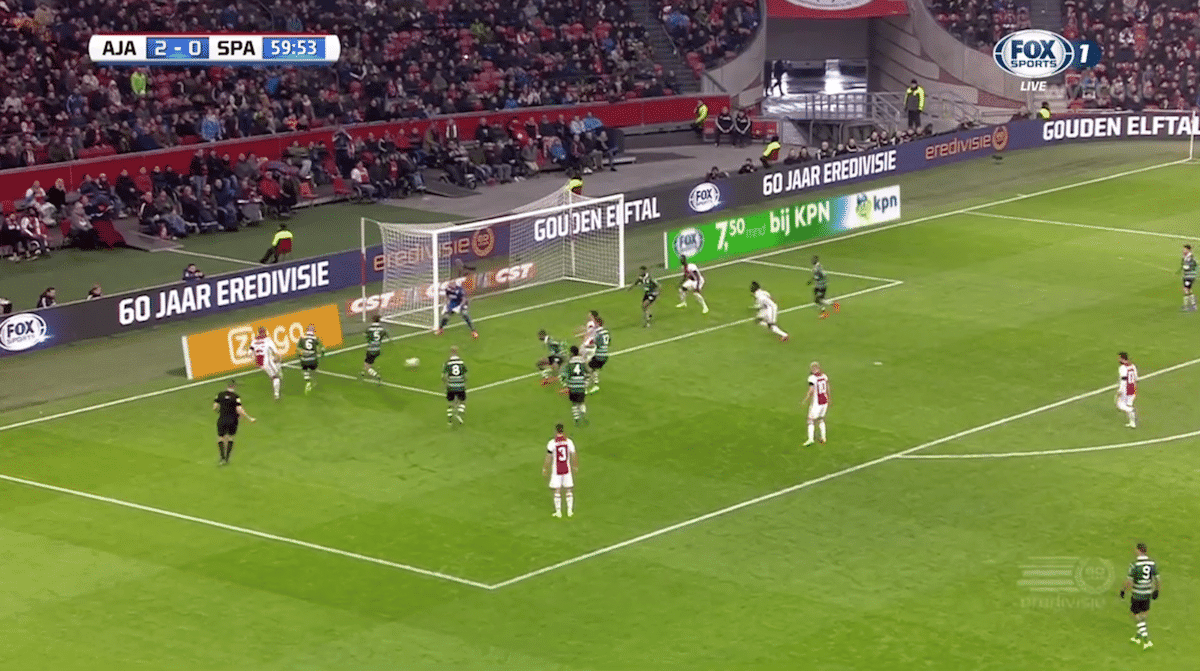 *Whispers quietly* Remember that Suarez comparison? Dolberg's play in the above three pictures is eerily similar to that of the Uruguayan's in that memorable game against Manchester United at Anfield. He danced past the United defence and gave Dirk Kuyt a tap-in.

In the first picture he's got his back to goal and he's closely marked by two players. His quick feet and close control enables him to work the slightest of openings and he's able to spin those marking him and get free. He then casually rolls the ball with his right foot before picking out a carefully measured pass with his left foot 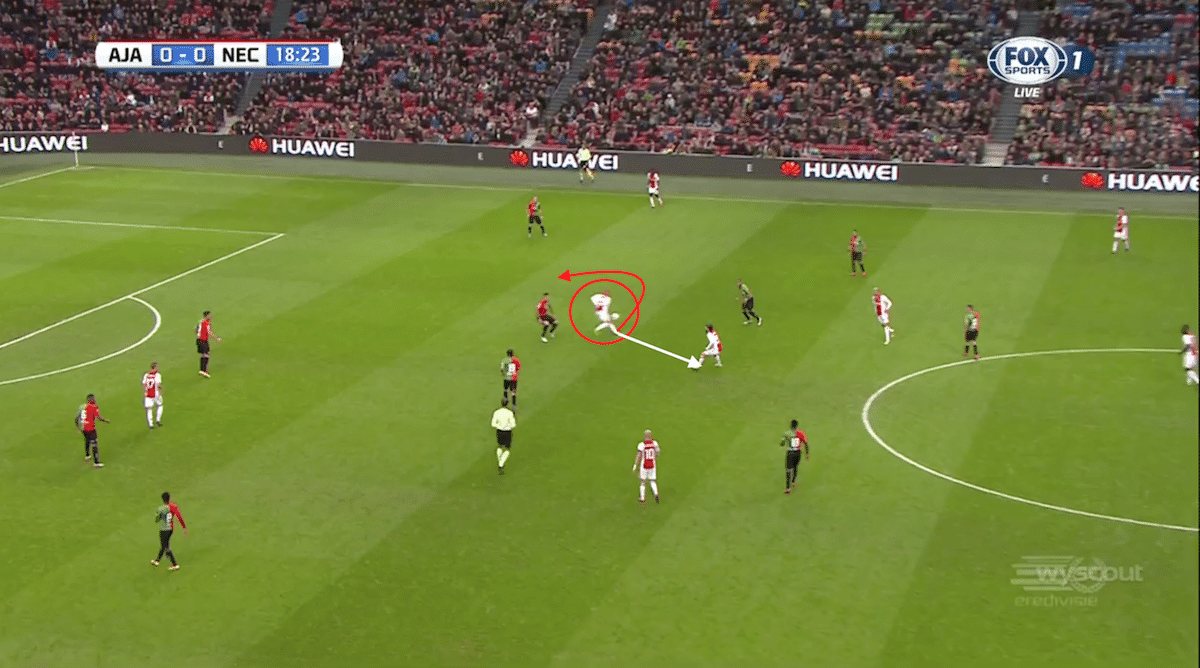 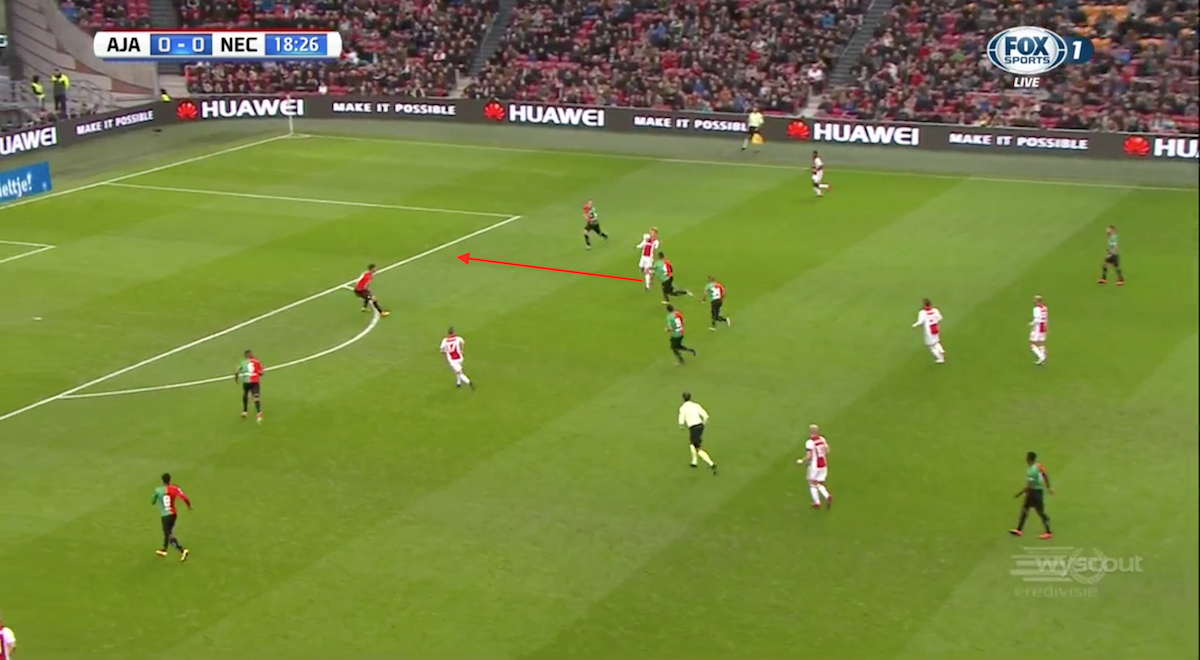 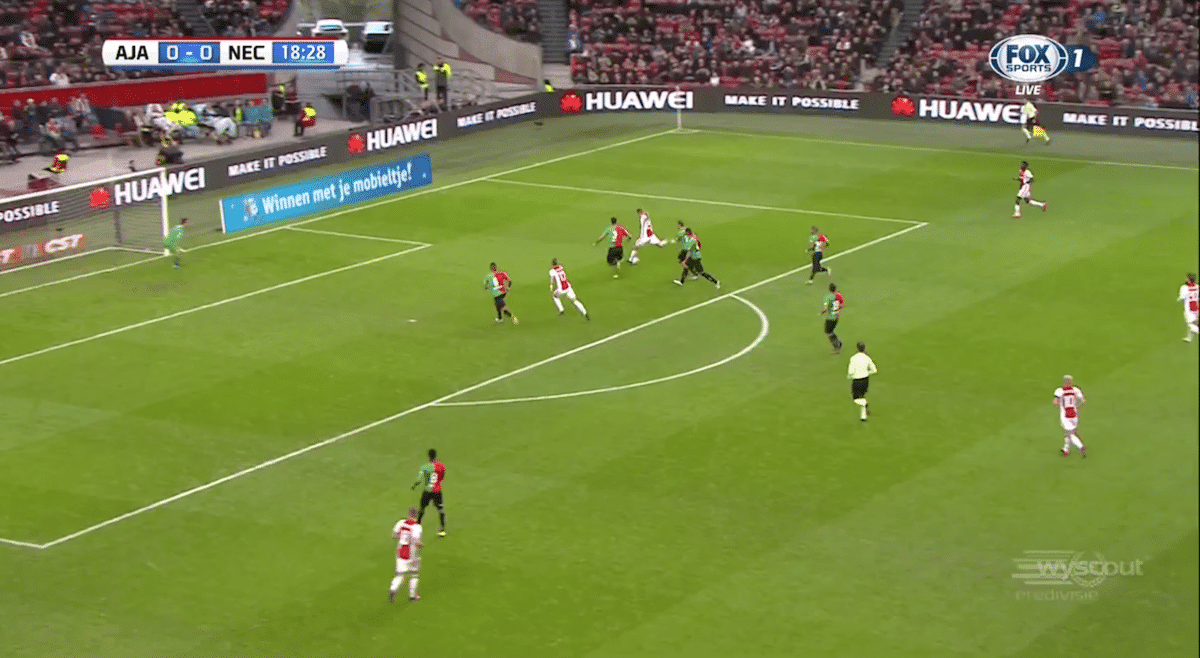 In the series of three pictures above you get to see Dolberg's link-up play with midfield, his anticipation, his proactive approach and his technique.

In the first picture he's dropped deep from his striking role to link play. He lays the ball off (highlighted by the white arrow) before spinning and looking to get into the vacated by the centre-back pressing him.

The ball is dinked over the opposition's player and Dolberg controls it on his chest and in one movement carries the ball forward. He accelerates past the defenders looking to close him down before emphatically firing home from the position in the third picture.

Be honest, he wouldn't look out of place with the current Reds attack, would he? 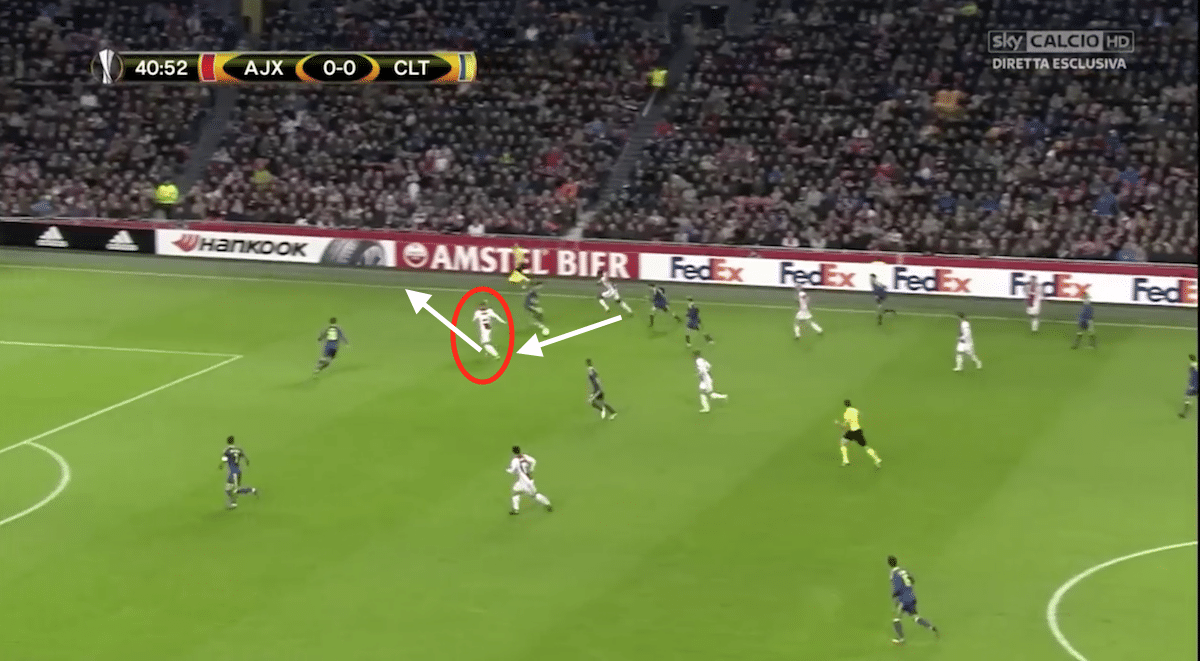 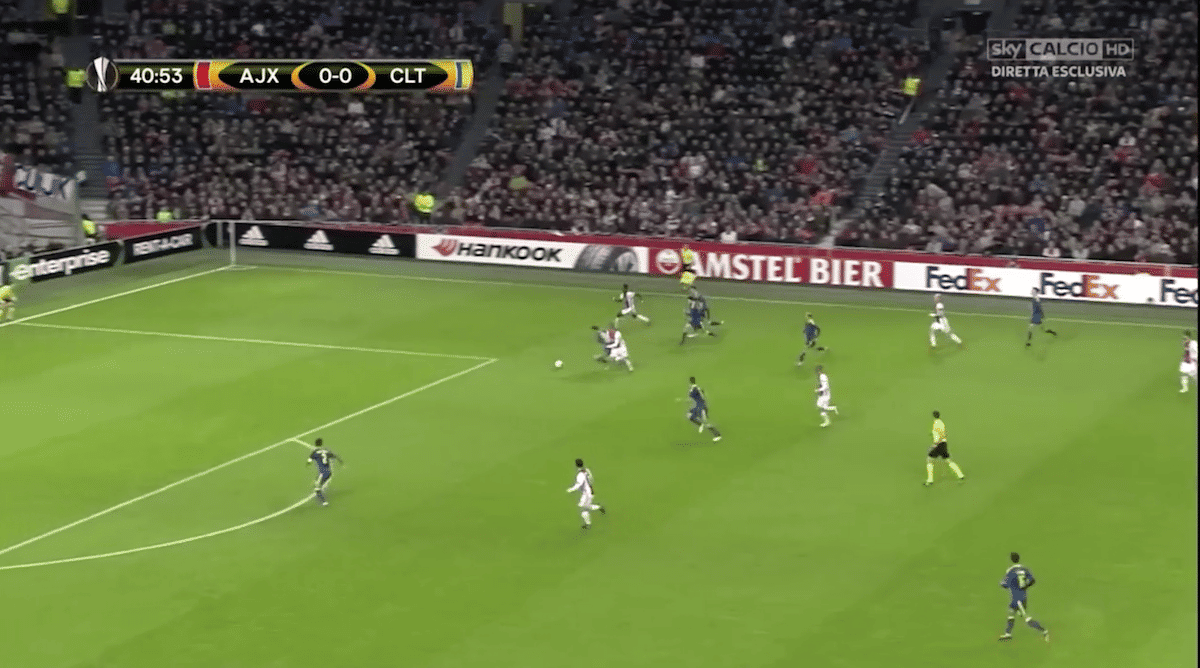 This time around it's his creativity and execution. In the first picture the ball is played to him and most players in this instance would return the pass to the player making the run into space (highlighted by the white arrow).

However, Dolberg holds onto the ball for a split second and tempts the Celta Vigo defender into committing himself before knocking the ball past him. He then bursts into space and calmly passes the ball past the ‘keeper.

It's like he's playing the game a few seconds ahead of those around him. 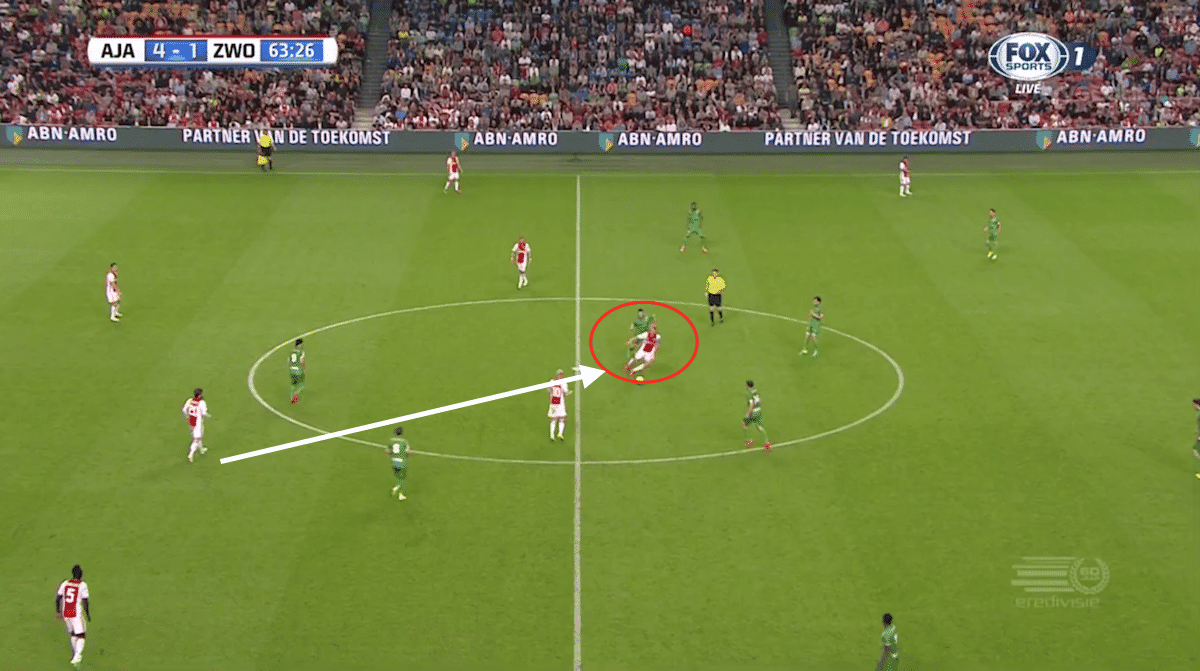 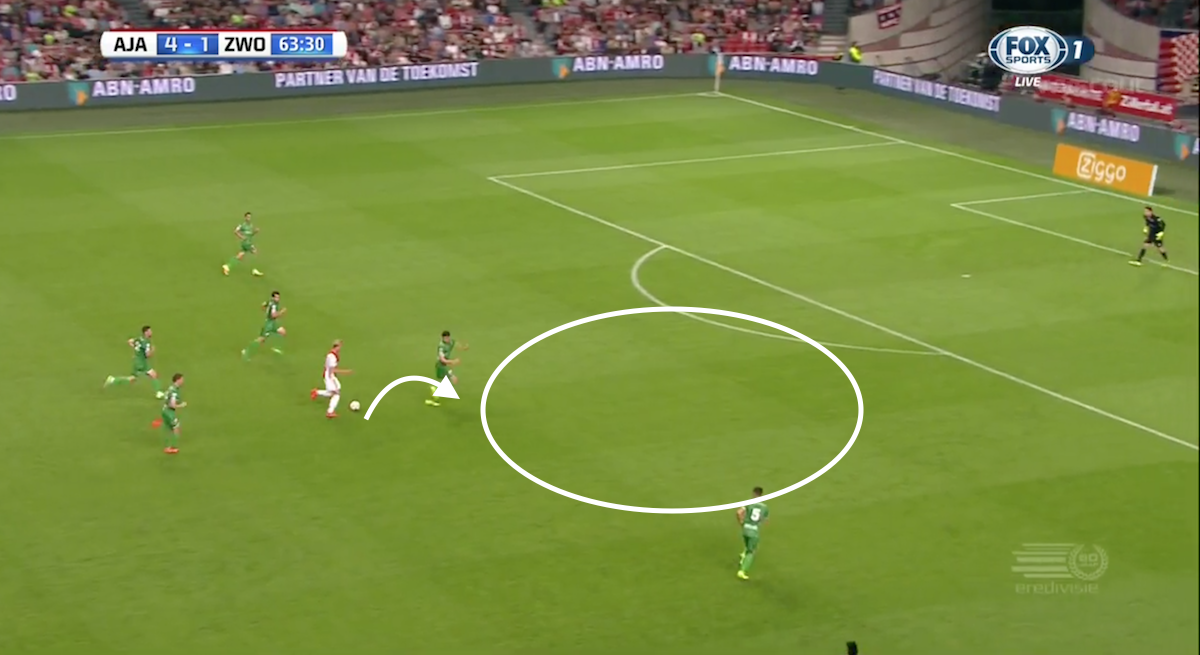 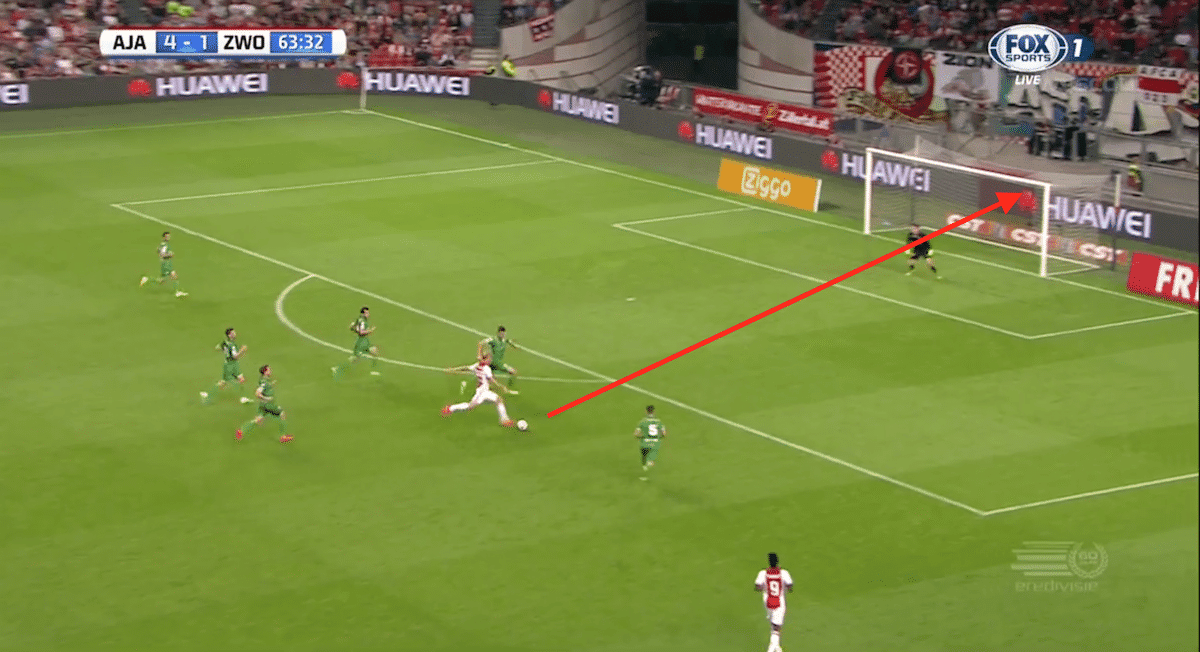 In the pictures above it's his dribbling ability on show. He moves into a position you would normally associate with a central midfielder. With three players around him, he's still able to turn on the ball and burst into the space his initial run created.

In the second picture, you see he's left those around him in his wake. He's running straight at the heart of the opposition's defence, but it's still one vs four.

Dolberg then creates even more space by faking to go to his left and then quickly shifting back to the right. The defender is sold by the dummy and shifts his weight to his right which opens up space for the forward, just as he'd intended.

The youngster pushes into that space, firing home a shot before they're able to get a block in. It bounces off the bar and over the line to round off a spectacular piece of individual brilliance.

Can you imagine Anfield under floodlights for a Champions League match and the supporters start doing the Goldberg chant?

Back to footballing matters – he needs to work on his tackling (he wins just 0.2 tackles per 90 minutes whereas Mane, Coutinho and Firmino all average 1 or more) but aside from that he has all the raw tools to be moulded into a world-beater by Klopp.

Able to finish with either foot, he can create his own chances as well as teeing up others. As Lee Scott, from World Football Index, said in his detailed analysis back in November, “The young forward has also already proven that he has the capacity to not only score goals, but to score a wide variety of goals against varied opposition.”

Standing at 6ft1 he's pretty handy in the air, not a necessity for the Reds as such but it will help them switch it up at times. He wins 1 aerial duel per 90 minutes which is better than Mane, Coutinho and Lallana but he falls short in comparison to Firmino (1.8).

If he's at the top of Liverpool's transfers targets for the summer then Klopp and the recruitment team should break the bank to guarantee his signature, but they probably wouldn't have to.

Ajax don't hold clubs to ransom and even though the player has a contract with the club until 2021 it's unlikely they would be able to resist bids of between £20-25million.

His salary is unknown but due to his age and the fact he's playing in the Eredivisie, it's safe to say the Reds could comfortably quadruple his salary and he would still be taking home less than squad utility man Kevin Stewart.

All things considered it's a no brainer. The last time Liverpool went shopping for a forward in Amsterdam it didn't turn out too badly, could history repeat itself?