Liverpool are the first club to make a firm offer to Monaco for their teenage striking sensation Kylian Mbappé.

According a report by Marca, the Reds have seen their €75million bid rejected by the Ligue 1 champions. It goes on to suggest that the French club would entertain offers of between €100-125million but are under no pressure to sell their prized asset.

The Liverpool Echo then implied that Jürgen Klopp and the recruitment team at Anfield are interested in the 18-year-old but no offer has been made yet. 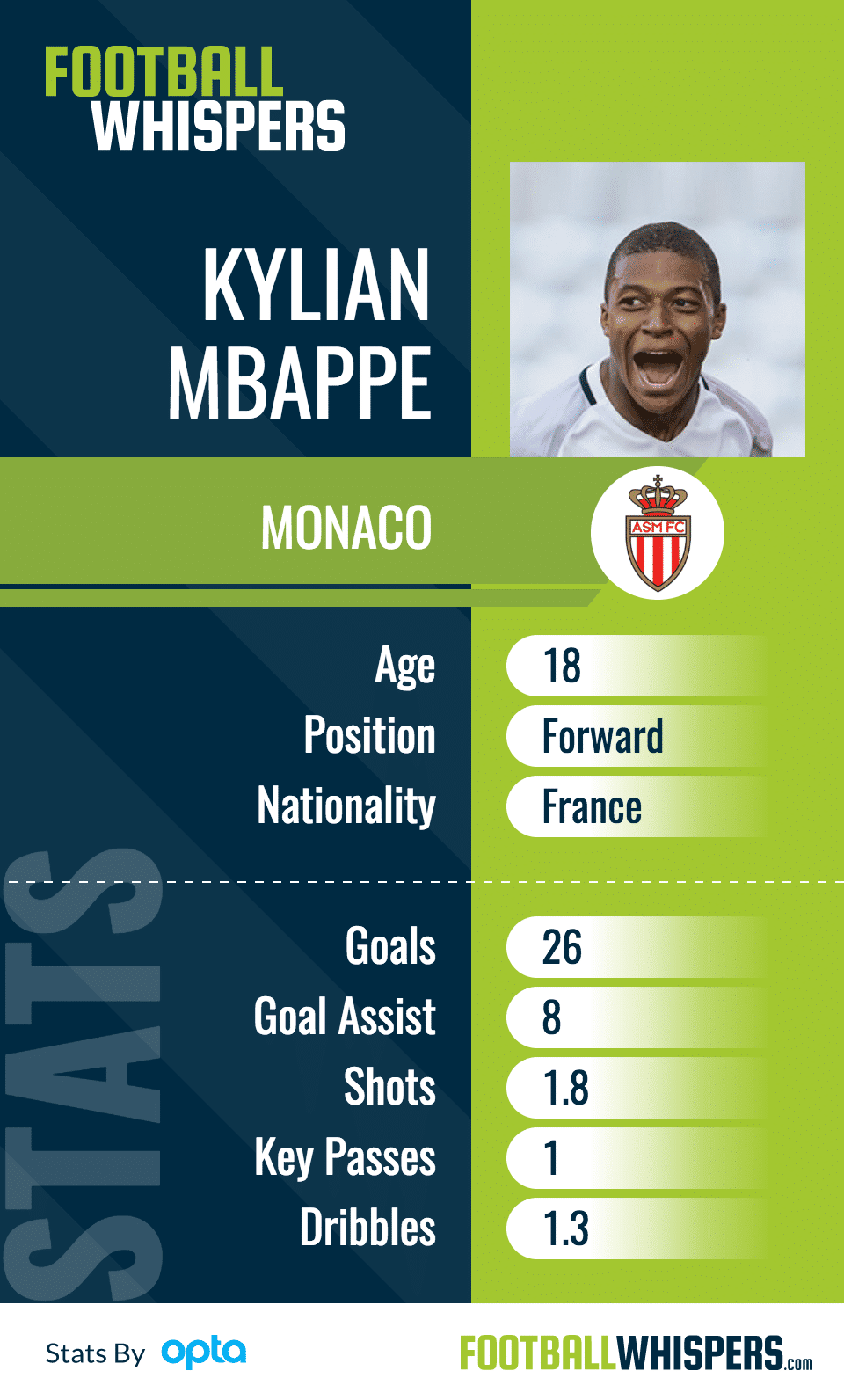 It's not the first time Liverpool have been linked with a move for the wonderkid. It was reported that the club made an attempt to bring him to Merseyside last year before he eventually signed a new three-year deal with Monaco.

“I'm very happy and very proud to sign my first professional contract with AS Monaco,” he told the club's official website the day he committed his future to the club.

“This is the club that has helped me grow. I feel good here, and I'm going to be able to continue taking new steps forward.

“I'll be doing everything I can to repay the faith shown in me by the management, the staff and my teammates.”

Mbappeé has done that and then some. He's found the back of the net 26 times this season and his goals helped his team to the Ligue 1 title and a Champions League semi-final. The versatile attacker is currently involved in a goal every 67 minutes — a remarkable achievement for a player of his age playing against some of Europe's elite.

Why the Liverpool links to Mbappé make sense

READ MORE: 3 WAYS LIVERPOOL COULD LINE UP NEXT SEASON

Well, why wouldn't they? Any club in the world with aspirations of being the best should have their eyes fixed on arguably the most talented teenager in world football today. He's like a regenerated player on Football Manager who has had his stats tweaked on the editor.

Mbappé has already shown he's capable of being a difference maker and a match winner. He even breached the impenetrable Juventus defence in a Champions League semi-final.

But there are other reasons, more specific to Liverpool, which mean the links to the French flyer make sense.

Owners Fenway Sports Group, like many other owners in football today, are all about trying to sign up the next big thing before they fully realise their potential. Mbappé ticks that box. He may have taken Europe by storm but he's still nowhere near fulfilling his potential.

The Reds could offer him much needed regular first-team action. Of course, he needs his game time managed so he's not going to burnout but it's a necessity he's playing a high percentage of games over the next few years if he's to hone his craft. Indeed, training with the likes of Cristiano Ronaldo and Gareth Bale is beneficial to an extent but sitting on the bench stunts his progression.

He's been linked to a number of clubs but of those, aside from Liverpool, who else could genuinely offer him as much exposure to first-team football?

Under Klopp's tutelage he could become one of the best. The former Borussia Dortmund manager has previous in doing so having seen Robert Lewandowki, Mats Hummels, Mario Götze, Marco Reus and Ilkay Gündogan flourish under his guidance in the past.

According to the Liverpool Echo, FSG are reportedly planning to back Klopp and the recruitment team this summer. As much as £200million could be spent on new arrivals. A move for Mbappé would wipe out close to half of that, but it would be a statement of intent and would show the owners are serious about giving Klopp the tools he needs.

Why the Liverpool links to Mbappé don't make sense 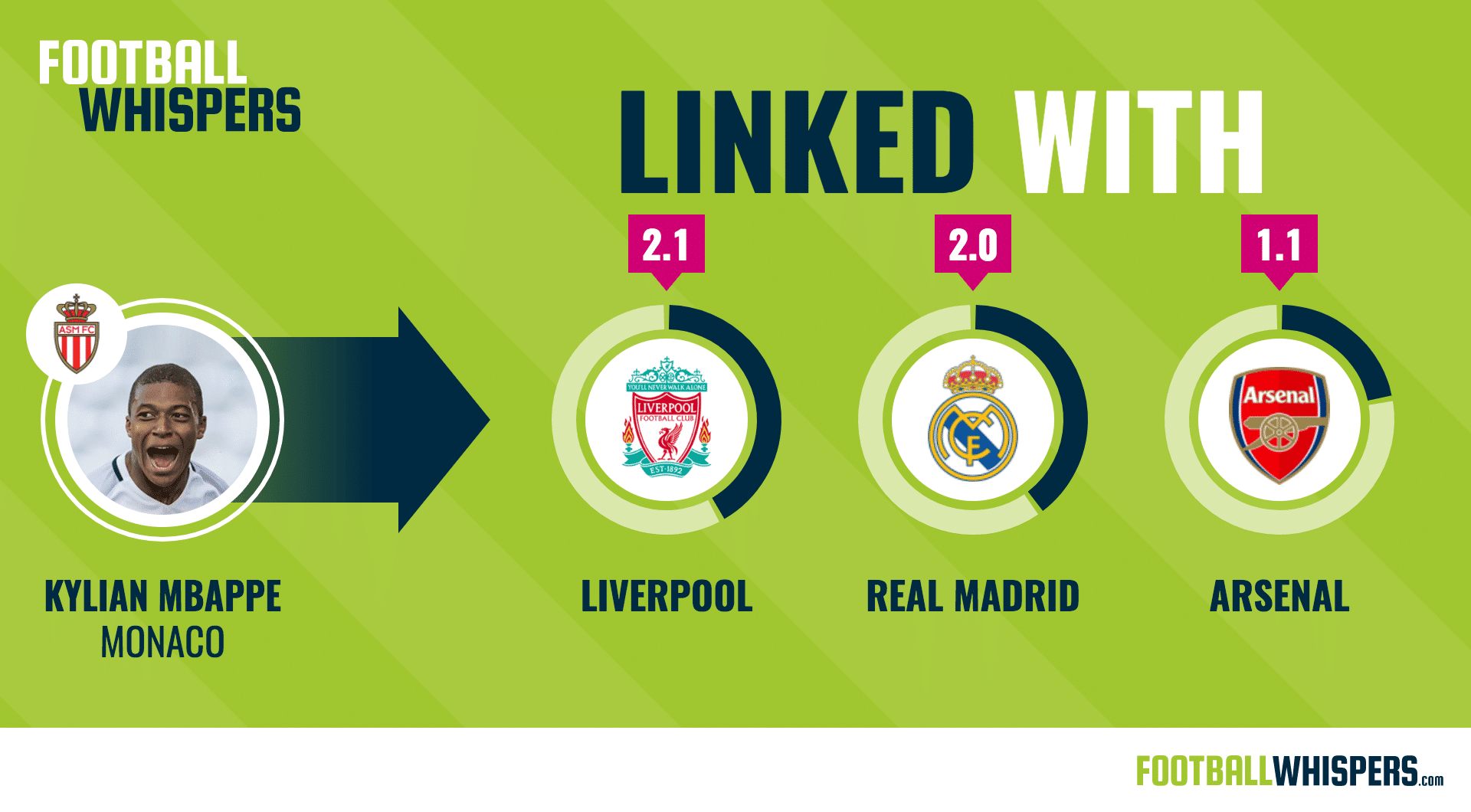 For starters, lets address the elephant in the room. Liverpool just don't spend that sort of money on players. Depending on who you believe the club's current transfer record stands at £35million for Andy Carroll or £36million on Sadio Mané.

If Monaco hold out for the reported €125million it means Liverpool will have to stump up triple what their current transfer record stands at to secure the services of Mbappé. As good as he is could that money not be spent elsewhere to improve the team?

The Reds are also said to be closing in on Southampton's Virgil van Dijk having held talks with the Dutchman. RB Leipzig's Naby Keïta is also a long-term Liverpool target and could join the club this summer.

Those three signings would add up to the best part of £200million and the Reds still wouldn't have addressed all of the issues in their current squad.

Liverpool have the history but they aren't considered a big club these days. In the past decade they've won one League Cup and they aren't a Champions League regular.

Klopp's men may be able to offer first-team football but as things stand the world's best players want to showcase their talents in Europe's elite competition on a regular basis. It's not something the Reds can currently offer whereas the likes of Real Madrid, Manchester City, Chelsea and Barcelona can.

If there's even a hint that Mbappé might be interested in a move to Anfield then they should everything in their power to make it happen. But by no means are they in a position to put all of their eggs in one basket.