Liverpool, for all their success so far this season, are rumoured to be in the market for another attacking player. Napoli’s Lorenzo Insigne has been heavily linked with a move to Anfield and could be on his way come the summer.

There is no doubt that the Italian would be a quality addition. And supporters who watched Liverpool’s game against West Ham United on Monday night will probably welcome the prospect of more creativity, more guile in the final third.

The issue, though, should Liverpool pursue a deal for Insigne, will be where he fits into this team. The front three, superb throughout the season, have faltered over the last couple of weeks. But Mo Salah, Sadio Mané and Roberto Firmino remain largely irreplaceable.

Between them, the trio have 36 goals in the Premier League alone this season. Jürgen Klopp might, of course, choose to play with a front four, as he has done on several occasions. Xherdan Shaqiri has been used as an additional attacker in those cases, but clearly Klopp wants a different option.

The question remains, though: what would Insigne offer that is different? The Italy international, who has spent his whole career at Napoli, will be 28 in the summer and the transfer fee required to bring him in is expected to be sizeable.

Liverpool were believed to be willing to shell out £61 million, but Napoli’s outspoken president Aurelio De Laurentiis has made clear he will not sell for any less than £131 million. Liverpool, if the reports are to be believed, have not balked at this demand.

Signing Insigne, then, would mean a significant outlay, particularly for a player fast approaching 30. And it must be considered, too, that there is no obvious place in the starting XI for Insigne. He has thrived in a more central role under Carlo Ancelotti this season but has spent most of his career operating on the left wing. 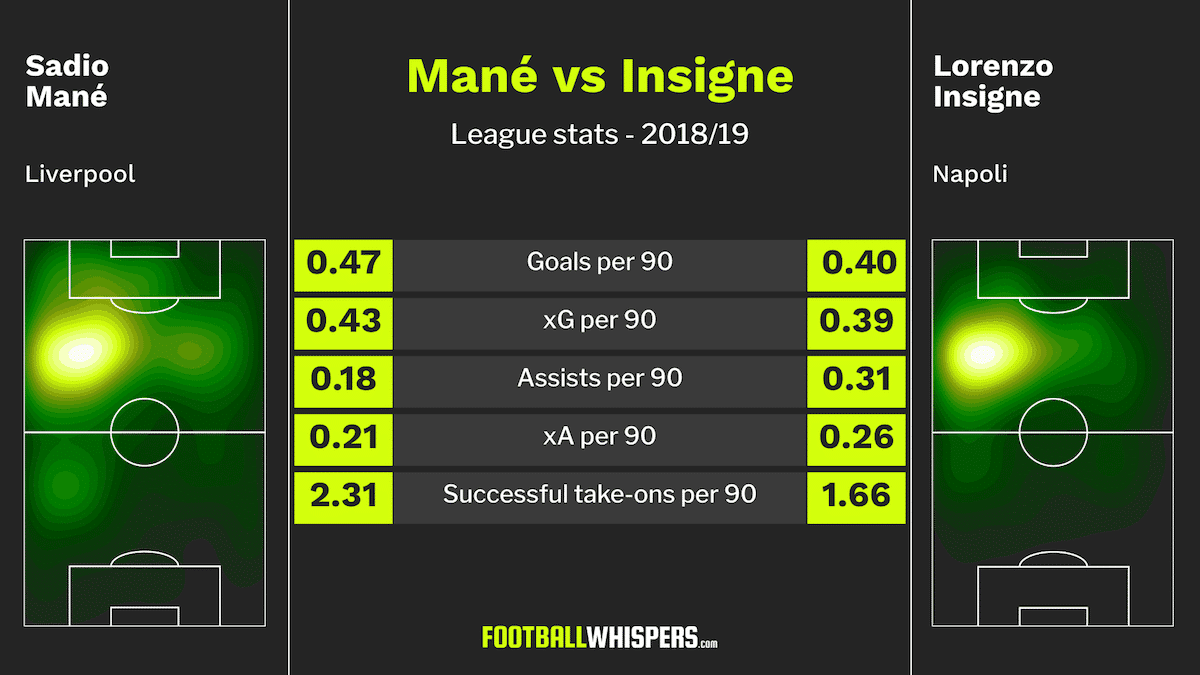 It is interesting to compare Insigne’s stats with those of Mané, a player who is two years younger and equally capable of playing in a variety of positions across the front line. There are several areas in which the two are very similar: since the 2016/17 season, Insigne has an xG per 90 of 0.39, compared with Mané’s 0.43. They are not too far apart in terms of xA either: Insigne averages 0.26 and Mané 0.21.

The main difference perhaps is in creativity: Insigne’s average of 0.31 assists and 2.26 key passes per 90 is significantly better than Mané’s (0.18 assists and 1.5 key passes).

In other areas, though, there is little to separate the two. Both average over six touches in the opposition box per 90 and both score at a rate just under a goal every other game.

Liverpool must consider, then, whether it is worth paying the money required to bring Insigne in when they are not exactly short of quality in his position. The Italian would, without question, bring more quality and add depth to the squad. But the fee, given his age and Liverpool’s situation, appears excessive.

There is talk that Insigne will choose to sign a new contract at Napoli to put an end to the speculation, and that seems the most realistic outcome. He has been a staple at the San Paolo since 2012 and does not appear to be in any rush to leave.

“I'm very superstitious. I wear 24 because it's my wife's birthday and it's brought me luck,” Insigne said in an interview with DAZN last month. “I really hope to stay in the heart of this city so that one day, Napoli also retire the No 24.”

To tempt him away, Liverpool’s offer would need to be a good one. And Napoli are clearly reluctant to part with one of their most important players. Insigne has scored 11 goals in all competitions this season – only Arkadiusz Milik, with 12, has more – and has struck up a strong working relationship with Ancelotti.

Liverpool, however enamoured they are with the Italian, might be wise to look elsewhere. There will be other options, perhaps less reputable, less high profile. In Insigne, the Reds would be acquiring an unquestionably talented player, but one with attributes they have already got.