Barely 30 miles separates two of the fiercest rivals in English football, but for one night only Liverpool became a home-away-from home for thousands of Manchester United fans as their team played Arsenal, at Anfield, in a fixture which few people are aware of even to this day.

The cities of Manchester and Liverpool have plenty in common. Both were key players in the industrial revolution of the 19th century, Liverpool as a major shipping hub and Manchester as a manufacturing metropolis.

One of the first railway lines in the world was built between the two cities in 1830, while their impact on the music and cultural scene is well documented.

In terms of football both Reds share plenty too. They can proudly claim to be the two most successful club sides in the country, with the biggest fan bases to boot, they’ve also experienced unthinkable loss and tragedy in the past, while legendary manager Matt Busby not only won five league titles, two FA Cups and a European Cup at Old Trafford, he also captained Liverpool too.

But that’s about as far as it goes, with the exception, that is, of that balmy night on August 20th 1971 when United fans made the Kop their own for a game against reigning champions Arsenal, having been banned from playing matches at Old Trafford due to crowd violence the season before.

The previous campaign had been blighted by a series of violent encounters, but none worse than a game against Newcastle United at Old Trafford, which had seen home fans throwing various objects, including knives, at their Geordie counterparts; but this was by no means an isolated incident as United fans had previous form, and as a result the club was ordered to play their first two home games of the following season on the road.

Stoke City’s Victoria Ground was chosen as one of the venues for the game against West Brom, some 50 miles down the M6, while Anfield would be the second ground that United called “home” as they welcomed Arsenal to their temporary abode.

Hooliganism was becoming rife in the early 1970s. As well as United, Leeds had also been banned from playing at Elland Road for the start of the season and in a pre-season game at Halifax that summer Reds fans had gone on the rampage, causing thousands of pounds worth of damage. “THUGS DECLARE WAR!” was how The Mirror described the behaviour of United’s fans but things would ultimately get worse before they got better.

The 1970s had seen something of an increase in the number of away fans travelling to games, mostly thanks to the opening of new motorways and Football Special trains, which carried supporters up and down the country with relative ease. Unfortunately, for some, this simply made it easier to cause trouble in far-flung places and United fans needed little encouragement.

Manager Matt Busby even spoke out to condemn the actions of those following his club who would go on to get something of a reputation for themselves across the country in later years. “We cannot have a minority spoiling things for everyone else and damaging the reputation of the club,” he would say.

The club actually banned several of their own fans for fighting during away games in the 1960s, but his words fell on deaf ears as the new decade dawned. Hooliganism and football would ultimately go hand-in-hand throughout most of the 1970s with the emergence of football “firms” and running battles between fans and police making the headlines on a regular basis.

However, the rivalry between United and Liverpool was slightly less poisonous in 1971, so the suggestion didn’t seem as ridiculous as it would today; but against a background of nationwide violence, thousands of fans travelling the short distance between two of the biggest cities in the country, and the fact that the game was played on a Friday night, to avoid clashing with Everton’s home match, nobody wanted to take any chances.

Hundreds of locals came out to greet their Mancunian visitors for this, a home game for United in absolutely no sense of the word, and initially things were pretty quiet. But groups of youngsters did have to be dispersed by the police after a number of windows were smashed, leading The Times to report: “a mob of 600 Liverpool skinheads” had gone on the “rampage” around the nearby streets; though there is little evidence from those that were there to back-up these claims. 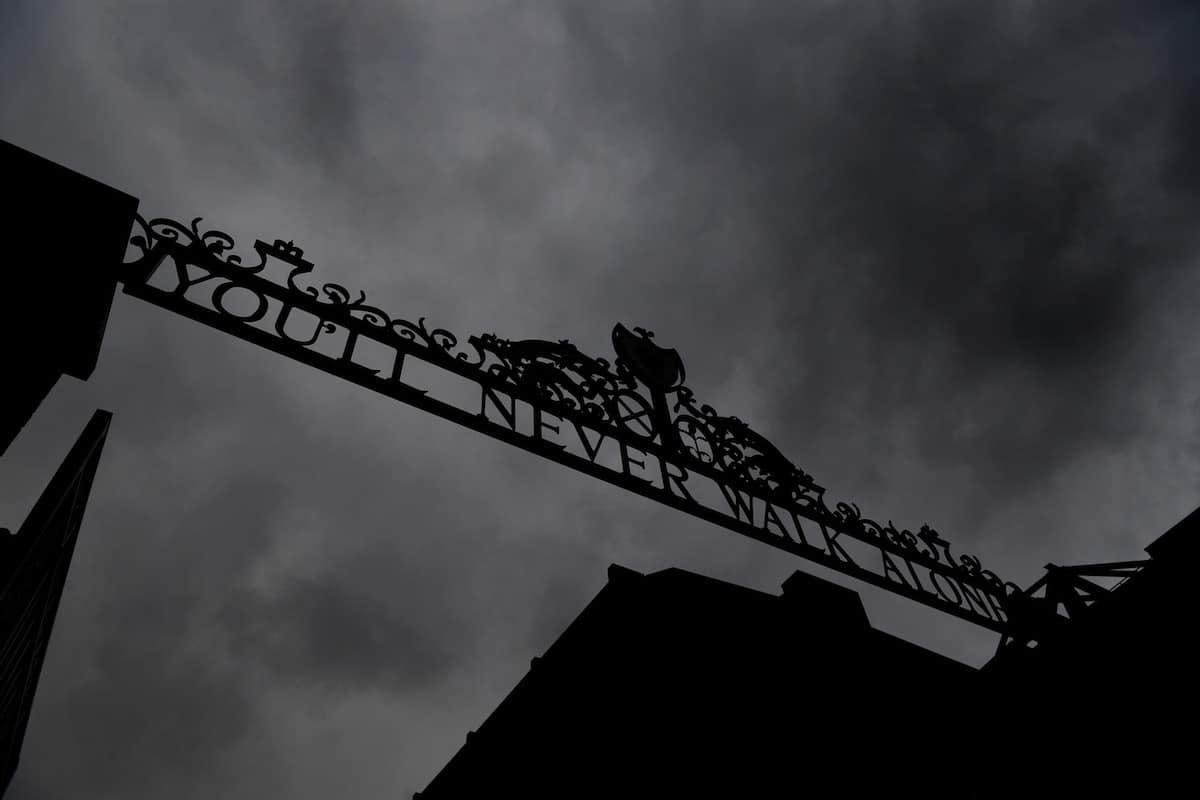 Meanwhile, inside the ground things were pretty lively too. As kickoff approached, the Kop, for years home to Liverpool’s most vibrant and vocal support, was filled with United fans who seemed to revel in the occasion, waving their scarves and singing their songs with even more gusto and enthusiasm than usual as if to prove a point.

“The big question was where to stand, the Anfield Road end or Kop?” United fan Pete Molyneux told Football Whispers. He was there that night and has watched United home and away for over 50 years. “For me it had to be the Kop – it was too good an opportunity to miss.

“As we got onto the terraces a big Liverpool chant went up and we found ourselves surrounded by scousers in one corner. Some United fans spilled onto the pitch and legged it to the safety of the other end so I did the same, but kick-off was imminent and the players were warming-up.

“As I reached the halfway line there was an Arsenal player in my path, I diverted my run but he moved across to block me. “What’s this to**er doing?” I thought, “does he not realise it’s just gone off back there?” I realised it was Peter Storey, Arsenal’s renowned hatchet man.

“Just as I was thinking I should have taken my chance on the Kop, he smiled, winked and moved out of the way. Seconds later I reached the safety of the Anfield Road end. Storey had only been having a laugh but I told my mates he bottled it because he didn’t want to risk losing his hardman tag!”

Roy Cavanagh was also on the Anfield terraces that night and remembers events clearly, despite having followed his side since the 1950s. “I was in the main stand, opposite where the teams came out,” he recalls. “I still remember it was a decent evening weather wise and that there hadn’t been too many problems around the ground.

“There were over 27,000 people there that night who were virtually all United fans and the kick off had to be delayed as they realised that the majority of their fellow fans were on the Kop. Wanting some of the action they simply climbed the fences and ran across the pitch to the other end.

Even though this fixture will be better remembered for its bizarre logistical arrangements the game itself was pretty special too. United had won their first two games of the season and a win would have put them in pole position after three games, whereas Arsenal had just completed the double the previous season and still boasted a quality side throughout.

Arsenal took an early lead thanks to a spectacular Frank McLlintock effort in the fourth minute, only for United to come storming back with goals from Bobby Charlton, Alan Gowling and Brian Kidd which, indeed, saw them storm to the top of the table with an impressive 3-1 win in the most unusual circumstances.

“United had a great start to the season being well clear by Christmas,” says Cavanagh. “Then the wheels came off and the side really struggled. That was the start of Frank O’ Farrell’s demise at Manchester United, but he would have the consolation of managing Manchester United to a victory at the home of Liverpool against the current double winners Arsenal, with the Kop being full of United fans!”

United had been made to pay by the actions of some of their fans, quite literally. The attendance at Anfield that night was 27,649, meaning Arsenal were entitled to compensation as it fell short of the 48,000 gate from the same fixture the year before in the days when gate money was split.

Liverpool, too, were entitled to 15 per cent of the takings, while Everton stood to benefit if their crowd for the following day’s home game with Sheffield United fell below 46,000 – the gate recorded was 41,727 and United were forced to cough up once again.

Although the occasion is still fondly remembered by the supporters who were there that night, it seems to have passed the players by, somewhat; lost in the mists of time. “United played a home match at Anfield? Give over,” were the words of Alan Gowling, who scored for United that night when asked for his recollections by the Guardian in 2010. “I can't remember, who did we play?”

United ‘keeper Alex Stepney also seemed equally oblivious, claiming: “I thought I’d only ever won one match at Anfield? I can add a second now!” Whereas David Sadler didn’t even know he’d taken part. “Was I playing?” he said. “I just can’t remember it.”

And with the Kop full of Manchester United fans that night surely the teams didn’t take to the field to the strains of Liverpool’s famous club anthem, did they? “It was only the third game in my career,” said Liverpool stadium announcer George Sephton when the question was put to him. “I couldn't swear on the bible but I'm almost certain I didn't play You'll Never Walk Alone!”