Harry Wilson is a man in demand.

Liverpool fans feel he deserves a chance in the first-team at Anfield after a sensational season with Derby County while Wolverhampton Wanderers, Newcastle United, Southampton and Brighton are all believed to be interested in acquiring his services on a full-time basis according to Sky Sports.

The 22-year-old Welsh winger has made the most of his opportunities whilst out on loan over recent campaigns.

A six-month loan spell with Hull City during the second half of the 2017/18 season yielded seven goals in just 13 starts in the Championship.

His form there didn’t go unnoticed and Derby signed him up on a season-long loan. Along with Mason Mount, he's been a key part of Frank Lampard’s youthful squad and they now find themselves just one victory away from a return to the Premier League.

Wilson’s netted 16 times in the Championship for Rams this season. He also added a further two in domestic cup competitions, including a worldie against Manchester United.

You can’t help but admire the Wales international. He’s delivered on everything asked of him and then some.

But that doesn’t mean he’s a good fit for Liverpool and if there are £25million bids on the table for him as reported, the club should be cashing in on him this summer. 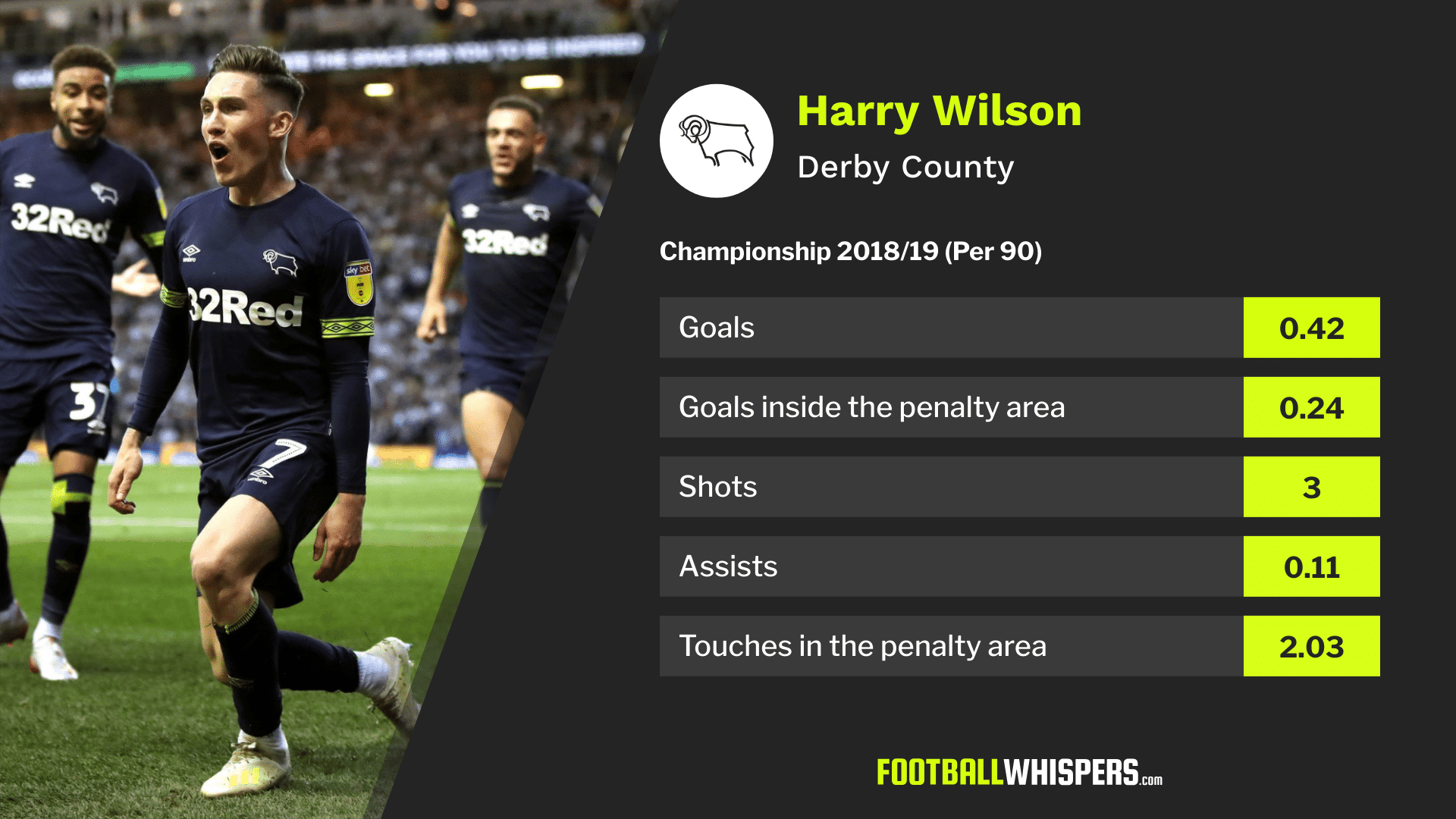 When looking at goalscorers you want to see whether or not their goals are sustainable and transferable. For example, will they only thrive in certain teams? If so, does the team play in a similar style to you? That sort of thinking.

While Wilson's 0.42 goals per 90 is impressive, with only two midfielders managing a better averaging in the Championship this term, the fact he's only scoring 0.24 of those inside the penalty area is not.

It means close to 40 per cent of his goals are coming from outside the penalty area. Immediately it becomes apparent that a third of his goals hinge on whether a team is quick enough to close him down and the quality of the man between the sticks.

It's fair to say both defenders and goalkeepers are better in the Premier League meaning Wilson isn't going to score as many long range efforts.

For context, over the past two seasons, Mohamed Salah and Sadio Mané have scored 90 per cent or more of their goals in the Premier League from inside the area.

Of course, those two are elite but even the likes of Divock Origi and Xherdan Shaqiri have scored a large percentage of their goals inside the box.

Wilson's 2.03 touches in the penalty area is fairly low, with 65 Championship midfielders averaging more on a per 90 minute basis this season. Of the three shots he averages, two come from outside the penalty area, too. This means two-thirds of his efforts are from 18+ yards but only a third of his goals have arrived from these.

All of these numbers point towards him being someone who isn't overly confident of being in the penalty area. Yes, his game could be adapted but there's no guarantee he'd be as effective, and some players just can't break the habit.

Suso, for example, still hasn't refined his game enough to stop taking shots from distance. He's still an eye-catching player, he just isn't as devastating as he could be because of the choices he makes when close to goal. This hasn't stopped him from becoming on of Milan's main men.

The same could well happen to Wilson. He could turn out to be a key player for a number of clubs across Europe. Just, as things stand, it's difficult to see him fitting into the Liverpool team in terms of playing profile. Shoehorning him in because of his form shown elsewhere doesn't benefit him or the team.

The Reds should cash in on his high stock but add in a clause so they're able to make a move if his game ever does mature.