There must have been a strong sense of déjà vu for Liverpool fans in recent days after seeing the Reds linked with a big money move for Thomas Lemar.

If reports are to believed, Jürgen Klopp attempted to sign the 22-year-old in the final few days of the summer window, but a deal couldn't be struck due to Monaco's demands for their talented attacker.

There were mumblings of a winter move but, again, the Premier League club weren't willing to meet the reported €80million valuation.

It's become clear, however, that the Ligue 1 side want to do business this time around and they aren't shy about using the media to convey that message.

In an interview with Telefoot, Monaco vice-president Vadim Vasilyev let it be known, subtly, that a deal could be struck if the money was right: “A few hours after the match against Paris Saint-Germain is not the time to talk about the transfer window,” he said. “But good luck to those who want him. He's worth a lot.”

It may have been viewed as a throwaway comment, but to make it after a 7-1 mauling at the hands of their rivals is telling. He was using the media attention to put Lemar in the shop window.

Then, during a quick -fire ‘do you prefer' session, the vice-president of the Monégasque club picked Liverpool when asked which club out of the Reds and Arsenal he prefer to see the left-footed maestro to join.

It's just his personal preference, of course, but speaking to publicly about it will no doubt generate attention.

The player hasn't been able to replicate his 2016/17 form which saw him involved in a combined 25 goals across Ligue 1 and the Champions League as Monaco stunned the world by getting all the way to the semi-finals in Europe's elite club competition while wrestling the title away from Paris Saint-Germain.

With five games left to play, Lemar has been involved in just nine goals this term. His output has dramatically dropped and his form doesn't align with the prices being mooted in the press.

But Lemar isn't having a bad campaign by any stretch of the imagination. He's just adapting to a Monaco team in transition. Coach Leonardo Jardim saw a number of key players depart last summer and replacements aren't of a similar quality. The France international's output may have dropped because he's playing with inferior players now.

In terms of personal stats, Lemar’s posting better numbers across the board. His take ons are up per 90 minutes this season, as are his assists and through balls attempted. However, his open play key passes are down by 0.31 per 90, as is his xG90.

The versatile midfielder admitted he was unhappy after failing to secure a move away from the Stade Louis II. “I'm not going to hide it,” he said. “I was a little disappointed. I try not to think about it. I've kept working so that these clubs come back during the next transfer window.”

To his credit, he has kept working hard to ensure there's enough of a reason for the likes of Liverpool and Arsenal to part with fees which would break current club records.

The issue for Lemar, however, is that Liverpool appear to have already moved on without him.

The Frenchman was earmarked by many as a replacement for Philippe Coutinho; the man to play 1.5 positions in the starting XI, similar to exactly what the Brazilian did for the first half of the campaign and what Sadio Mané has done since his departure, drifting between wide areas and central ones.

He could rotate with the Liverpool No.19 to keep things fresh but also operate as more of an attacking midfielder on the left of three. On paper, he appeared to be ideal. And while he can still offer just that, the Reds already have a player like that in Alex Oxlade-Chamberlain.

The £35million summer signing from Arsenal has been a standout performer in recent weeks, playing in a hybrid role which sees him fill in out wide when Mohamed Salah cuts inside while doing the majority of his work as a box-to-box midfielder. The former Arsenal wing-back is thriving in his new role. 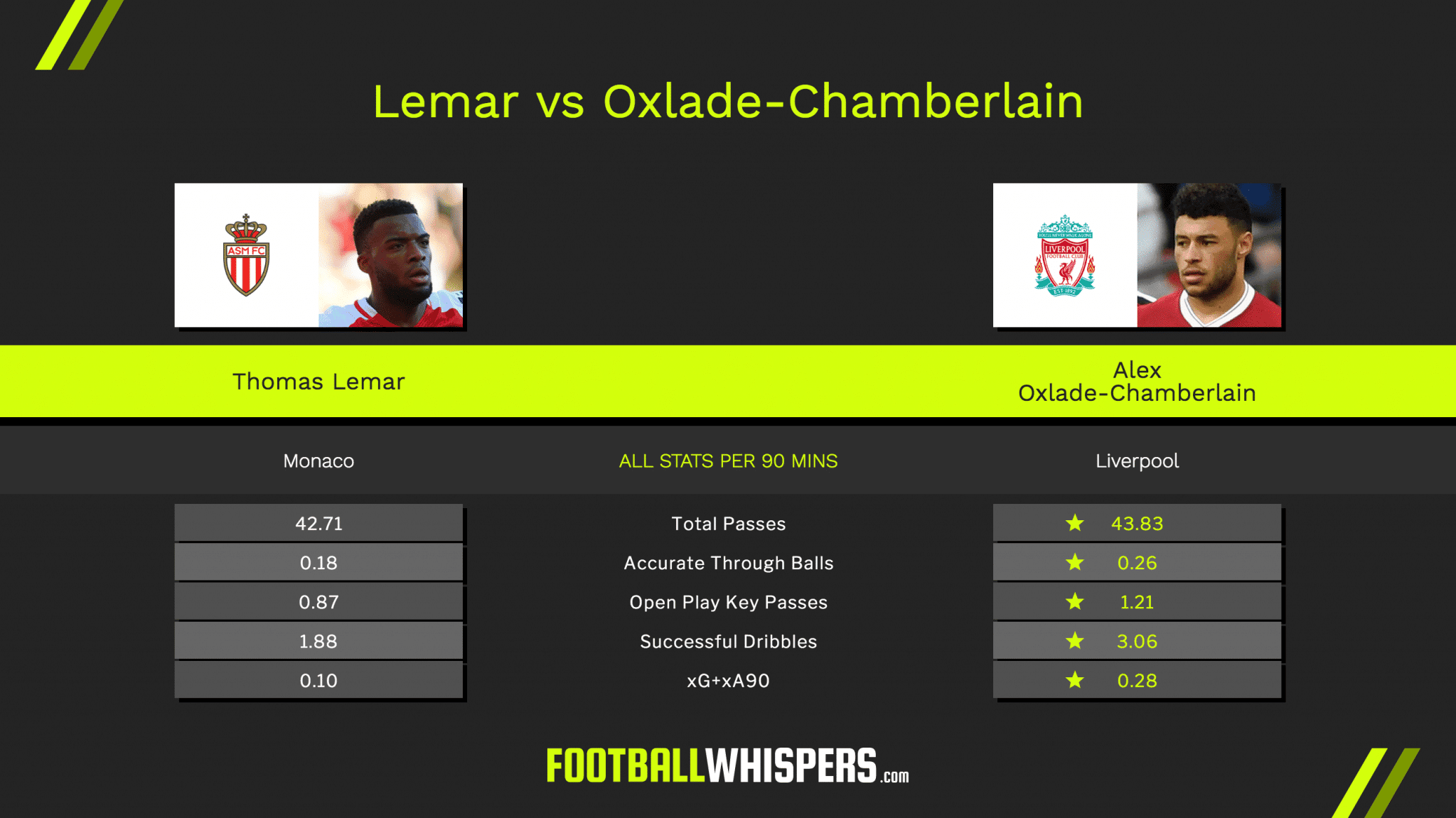 Before reading too much into the stats in the graphic it's worth noting Lemar has played on the left of a 4-4-2 and in the centre of a three behind the striker in a 4-2-3-1. His instructions will differ to Oxlade-Chamberlain's simply because his role in the team is different. But that will impact their stats.

The question to ask is: would Lemar be able to replicate the England international's numbers? After all, if he arrives at Anfield there's a high probability he'd be tasked with playing a similar role.

There's every chance the Frenchman's output would spike as soon as he's placed in Klopp's side but will there be enough of rise to justify the £75million fee?

Lemar may be viewed as a player to help the Reds breakdown those low defensive blocks, with Oxlade-Chamberlain starring in the more frenetic matches, but Naby Keïta's arrival ticks that box, adding guile to a sometimes blunt middle third. 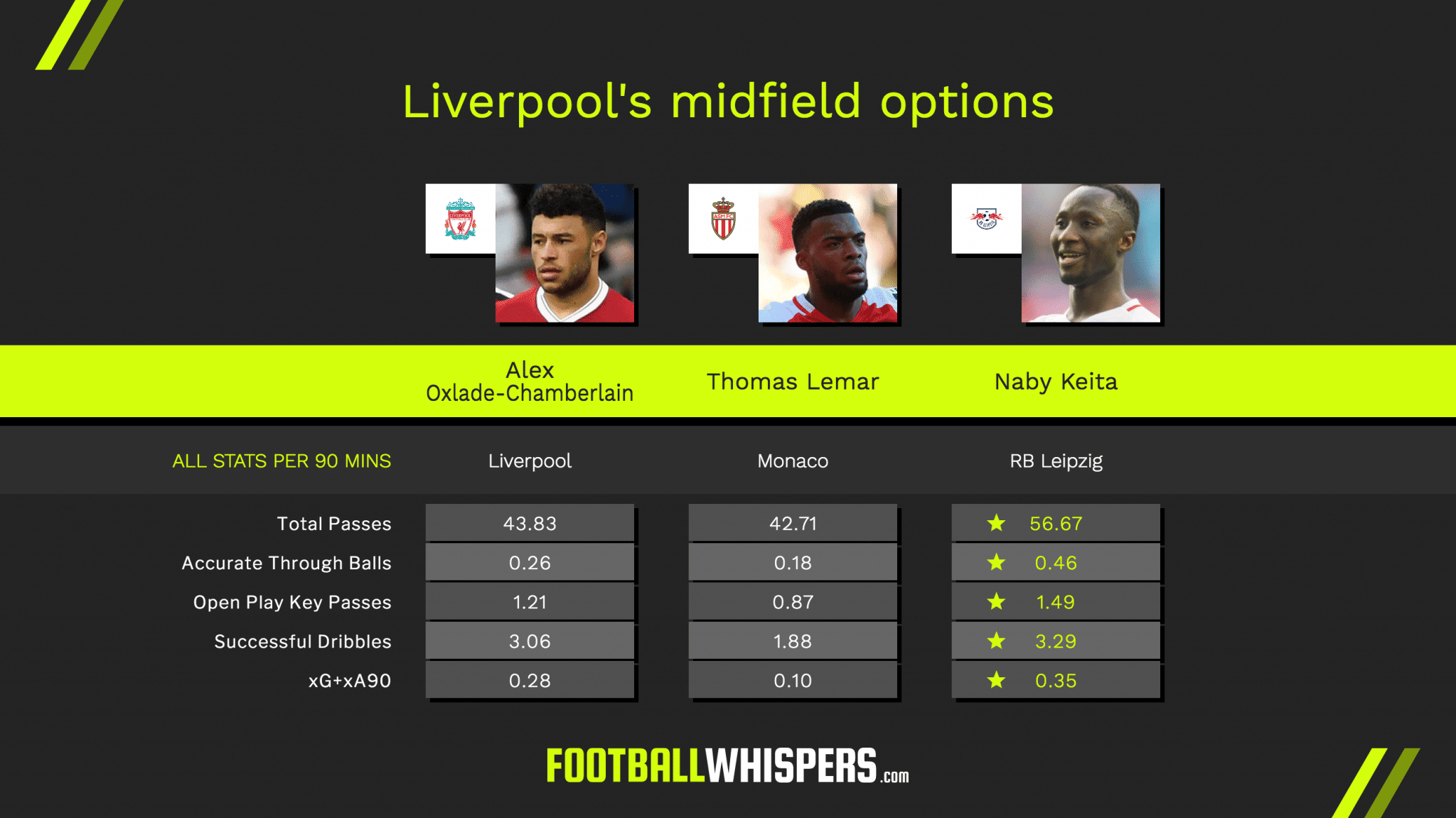 Keïta is completing more dribbles and his xG+xA90 is the best of the trio. But, as shown in the graphic, Oxlade-Chamberlain isn't that far behind the 23-year-old Guinean.

Liverpool could no doubt make use of a player like Lemar, the more creativity the better, but there's no guarantee he would be a starter and the Reds aren't in a position to have a potential club-record buy, who is far from the finished product right now, sat on the bench for large periods.

The Frenchman may have topped the list last summer but the Reds have evolved under Klopp and Lemar might have missed the window of opportunity to join his revolution at Anfield.