Liverpool are going big this summer in the transfer market. The Reds have already secured the services of Mohamed Salah and have, for a number of weeks now, been linked with £70million moves for Virgil van Dijk and Naby Keïta.

Those links are constant with both players seemingly being categorised as priority signings. However, there have also been tentative links to Kylian Mbappé and Pierre-Emerick Aubameyang.

Jürgen Klopp is said to be a keen admirer of the 18-year-old French forward and wants the club to be involved in any conversations if the Real Madrid transfer target decides his future lies in England.

The German coach knows all about Aubameyang having managed him while at Borussia Dortmund. The Bundesliga club are said to want £60million for their star striker after a move to Paris Saint-Germain hit the rocks.

According to Le Parisien, the Anfield hierarchy were prepared to meet Dortmund’s valuation and the striker was open to the move.

It would have been a statement to land of the best strikers in Europe. But as quickly as those reports emerged they dissipated and a move never materialised.

Since then links to strikers have been scare. James Pearce of the Liverpool Echo recently wrote a piece suggesting that the club wouldn't be in the market for a top striker if they couldn't sign Mbappé, but that they should be.

“There is a strong case to be made that Liverpool should have their sights set on another frontman as they look to mount a challenge both domestically and in Europe,” he penned.

“The fact is that Liverpool haven't had a lethal marksman on their books since Luis Suárez left for Barcelona three years ago.”

It's true, of course, Liverpool haven't had a prolific striker since Suárez opted to join the Catalan-based club. Daniel Sturridge has failed to recapture his 2013/14 form and the Reds have been left with a void in attack.

But is having a striker capable of scoring 20 league goals a season a necessity or a luxury?

While, on one hand, it's a positive to have a reliable goalscorer in your team there's also a chance the team becomes overly reliant on that one player to deliver the goals – see Liverpool 2014/15 when they desperately needed a fully-fit Sturridge firing on all cylinders.

The former Chelsea striker has been linked with moves away from Merseyside but the Daily Mirror claim he's going nowhere now.

The reports goes on to suggest that Klopp has put a block on Daniel Sturridge quitting Liverpool – because it would cost too much to replace him.

The German believes that any money received for the England international would be dwarfed by the amount it would cost to bring in another forward of similar quality.

One thing that Klopp looked to do upon his arrival was make the team a more well-rounded one. The more goal threats in your starting XI the less chance of the team being able to keep they all quiet, in theory anyway.

It was a similar story with his Dortmund side. Although Lucas Barrios and then Robert Lewandowski stole the headlines the squad had others chipping in with goals so it wasn't just a one-man show.

Of the teams mentioned, the Reds were the only one to not have a player finish the campaign with 20 or more Premier League strikes.

It goes to show that by spreading the goals, like Klopp's men did, they weren't that far off the teams with genuine world class goalscorers in their ranks.

Furthermore, when looking at the top six teams in the league, Liverpool had the most players score five goals or more with eight. Chelsea had seven, Man City finished with six, Man United with five while Arsenal and Spurs had just the four.

What's interesting though is that of those Spurs and Arsenal players, each team saw three of the their four players to have scored five or more go on to score ten or more.

League winners Chelsea had two players hit ten or more while the Manchester clubs had to settle with just the one player.

Of the top seven – when Everton are included – only United and Liverpool failed to have a player score 20 or more.

Do Liverpool need that prolific front man or are they going about things the right way?

There was an argument at times that the Argentine's inclusion was to the detriment of the other attacking players. There's no doubting that he's one of the best strikers in Europe but the needs of the many outweigh the needs of the few. It's why Guardiola opted to use Gabriel Jesus at times and bench Agüero.

Liverpool, however, looked frightening as an attacking unit. Would they suffer as a team having the former Atletico Madrid striker starting centrally? 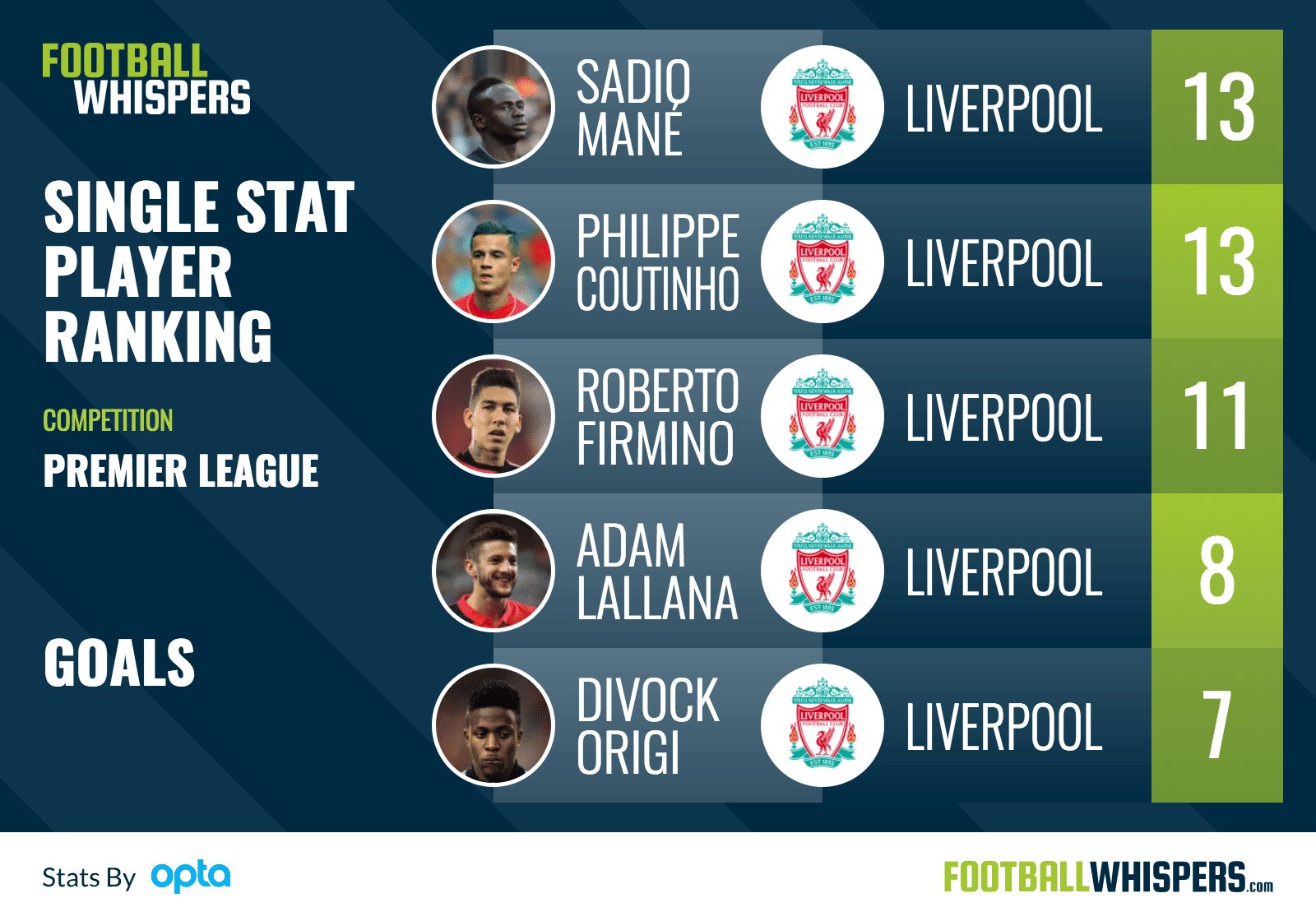 Firmino, the man set to lead the line next season, might not be clinical enough on his own, but his overall contribution is much more than goals. With him playing down the centre the Reds looked a completely different team. It's not like he's not chipping in with them either.

But, as previously mentioned, Klopp views it as a team game and he's strengthened his hand with the purchase of Salah.

The Egyptian found the back of the net on 15 occasions last year and is a menace in general. Make no mistake about it, Liverpool will have a more potent attack next season.

If they manage to bring in Keïta too, who scored eight for RB Leipzig during the 2016/17 campaign, then he will also be yet another goalscoring threat for the Reds as Klopp looks to assemble a team of goals and move away from being reliant on just that one predator.