Liverpool’s success in the Premier League so far this season, somewhat surprisingly, has been based primarily on their strong defensive record.

That was not what most expected of Jürgen Klopp’s side prior to the new season beginning. It was assumed that they would continue to play free-flowing, high intensity attacking football and that they would attack relentlessly and with reckless abandon.

Instead, Liverpool have changed their approach. Klopp has clearly acknowledged last season’s defensive deficiencies and attempted to address it. He has done so successfully.

The Reds have conceded just five goals in 12 league games, keeping seven clean sheets. It is a remarkable improvement. Last season, they shipped 38 goals across the league season, at a rate of a goal a game.

So far this campaign, they have conceded 0.41 goals per game.

Liverpool now appear more balanced and tactically cohesive. Their goal return has decreased, and they have not played with the same flamboyance as last season, but Klopp’s pragmatic approach has enabled them to remain in touch with a relentless Manchester City side – and it's worth noting that the Reds are the only side to have stopped Pep Guardiola's pacesetters from scoring.

“What we’ve done defensively so far is credit to the whole team,” Klopp told The Guardian last month. “We don’t concede a lot of shots in general. It’s not that we don’t concede because Alisson makes one world-class save after another. We don’t let them shoot often and that’s the best thing.”

Liverpool have only faced 25 shots on target in 12 games, and that is because they have continued to defend on the front foot, pressing high and restricting the opposition. They are not passive off the ball, not defensive in the traditional sense.

From September 2017 to the start of this season, Liverpool were on average conceding 1.075 goals-per-xG. Since August 20, however, they have conceded 0.585 goals-per-xG. A remarkable change – one which highlights how effectively they have shored things up at the back.

“It’s more the case that teams don’t usually play against us,” Klopp said. “They overplay our pressing with long balls, which makes sense. In a lot of games, our counter-press has been really good, which is much more important in terms of losing the ball and winning it back. 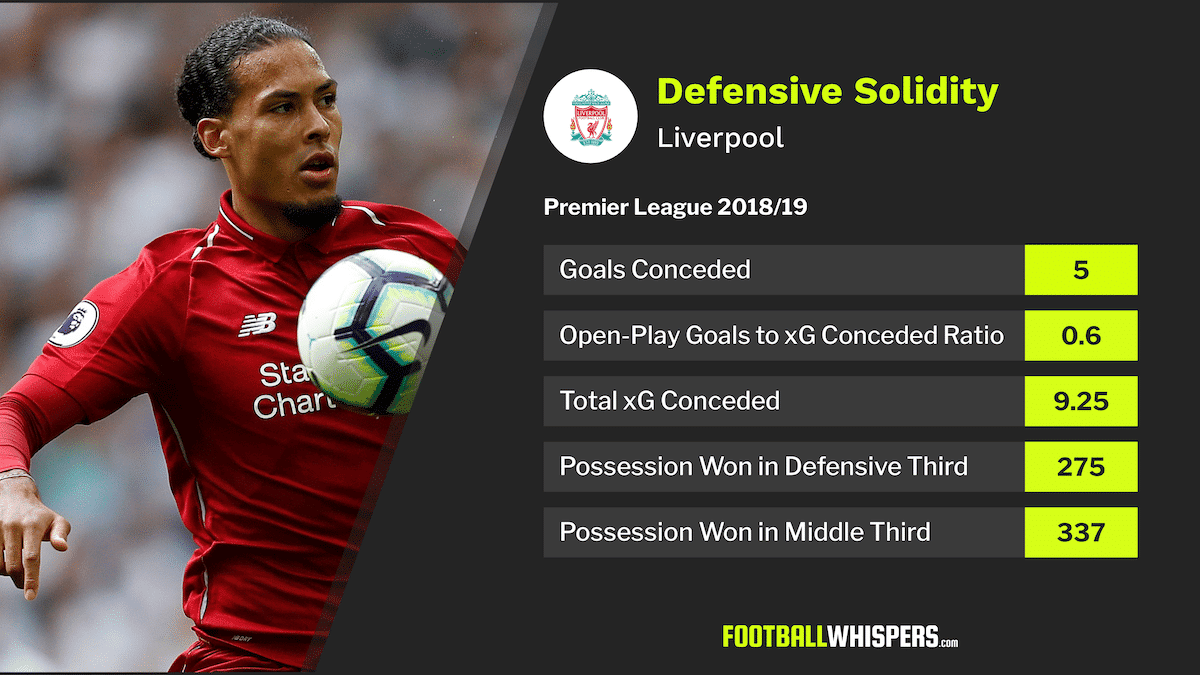 In terms of the high press, it depends on the style of play of the other team. You can’t do it if they don’t play. It’s not that we don’t want to do it anymore. If they play then we should be there.

“It’s not been a proper plan to sit back a little bit more but we have done that after being 1-0 or 2-0 up in games. We did sit back a bit more to not give space away, that’s true. It’s a question of maturity and that makes absolute sense. With the number of games we have it’s not about chasing a game always like crazy, you have to be smart. We try to be that without killing our nature.”

It is different, certainly, and so far it has proved successful. Whether Liverpool can maintain their current rate of conceding goals throughout the season remains to be seen.