Manchester United have enjoyed a spectacular start to the season.

With six wins from seven, only a draw against Stoke City blots an otherwise perfect record. They have only conceded twice and will arrive on Merseyside this weekend with their heads high and confidence on their side against North West rivals Liverpool.

Injury concerns over Paul Pogba and Marouane Fellaini will mean there will be a new look to the United midfield, but with Ander Herrera and Michael Carrick able to slot into whichever formation José Mourinho decides on, the game may not be won and lost in the middle of the park.

Liverpool’s biggest strength this season has been down the flanks.

The signing of Mohamed Salah this summer has helped them move Sadio Mané to the left of their attack and instantly made them a more dangerous forward line in the process.

Sadly, due to an injury picked up on international duty, we won't get to see the Senegal international terrorise the United back-line on Saturday.

Liverpool were supposed to be title contenders this term, but since the 5-0 thrashing at Manchester City and Mané’s red card, the results have been sketchy. One win, 3-2 away at Leicester City, was sandwiched between two disappointing draws.

Philippe Coutinho has come back into the fold since his protracted transfer saga with Barcelona and against the Foxes he was key.

His cross found Salah unmarked at the back post for the opener and he also added a stunning free-kick for the Reds. The Brazilian offers a much different threat than Mané, but it will still be the biggest test Antonio Valencia will have faced this season.

Not getting any younger, the Ecuadorian is 32 years old, but remains one of the better and most consistent right-backs in the league.

Constantly, new, younger defenders are linked with moves to Old Trafford – Serge Aurier and Thomas Meunier were just two this summer, but Valencia continues to make the role his own. 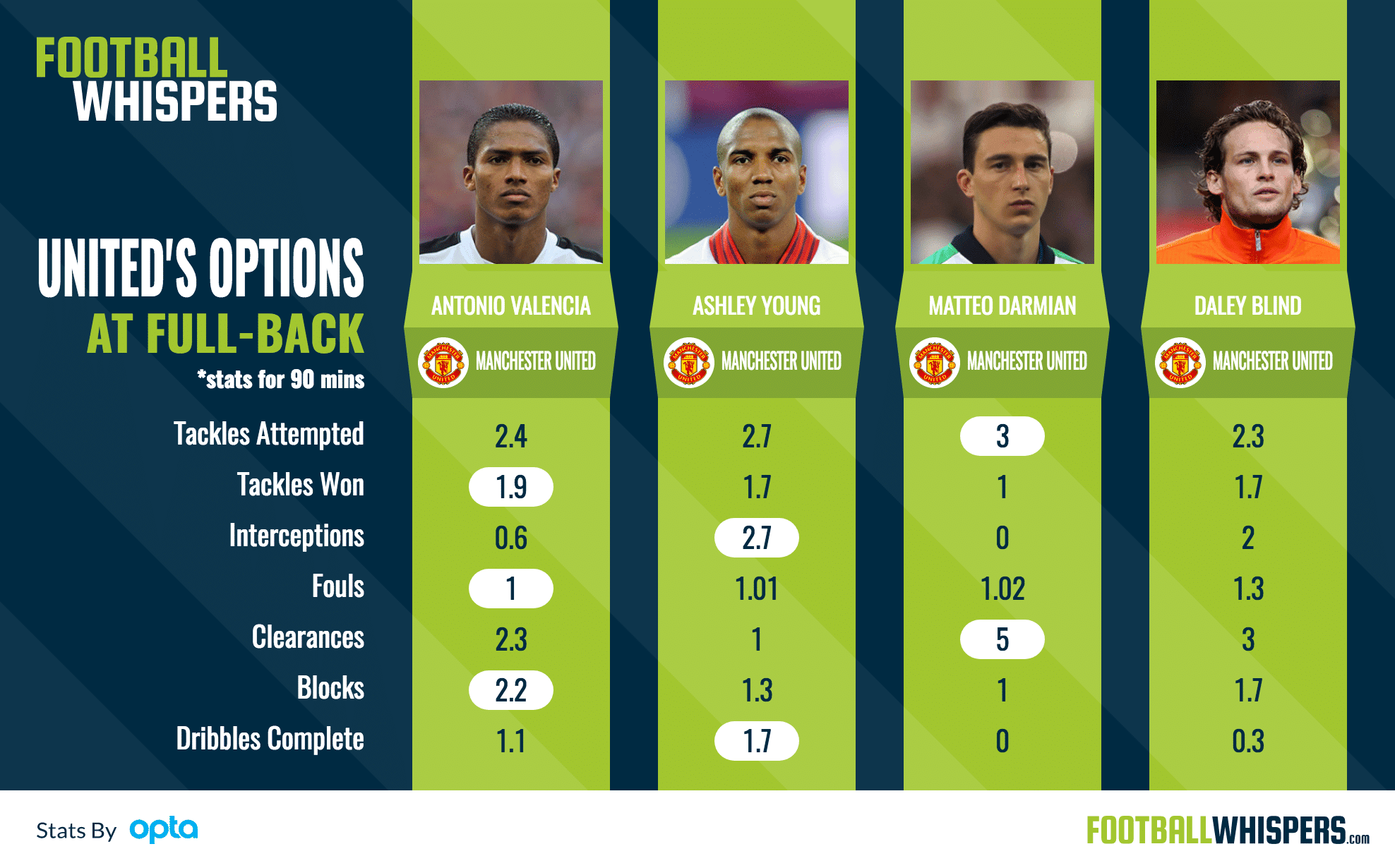 Compared to United’s other full-back options, the former Wigan Athletic man is still competing at a high level, winning 1.9 tackles per 90, conceding just one foul and making 2.3 clearances and 2.2 blocks.

Yet, that doesn’t mean that small cracks aren't beginning to appear.

Against Stoke City, for the first goal, Valencia starts in the right position as you can see from the graphic below. 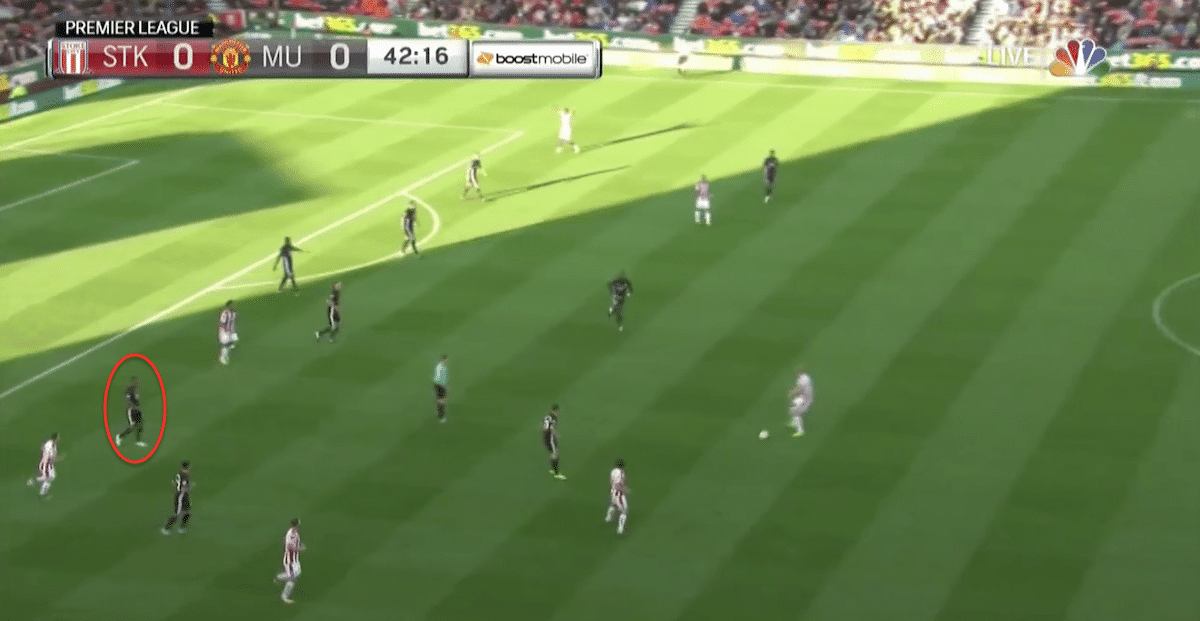 As the play moves to the opposite flank, Xherdan Shaqiri has moved deeper so is no longer Valencia’s problem. Eric Choupo-Moting begins his run on Eric Bailly’s blindside. The Ecuadorian sees the run, even pointing at the Cameroonian’s movement. 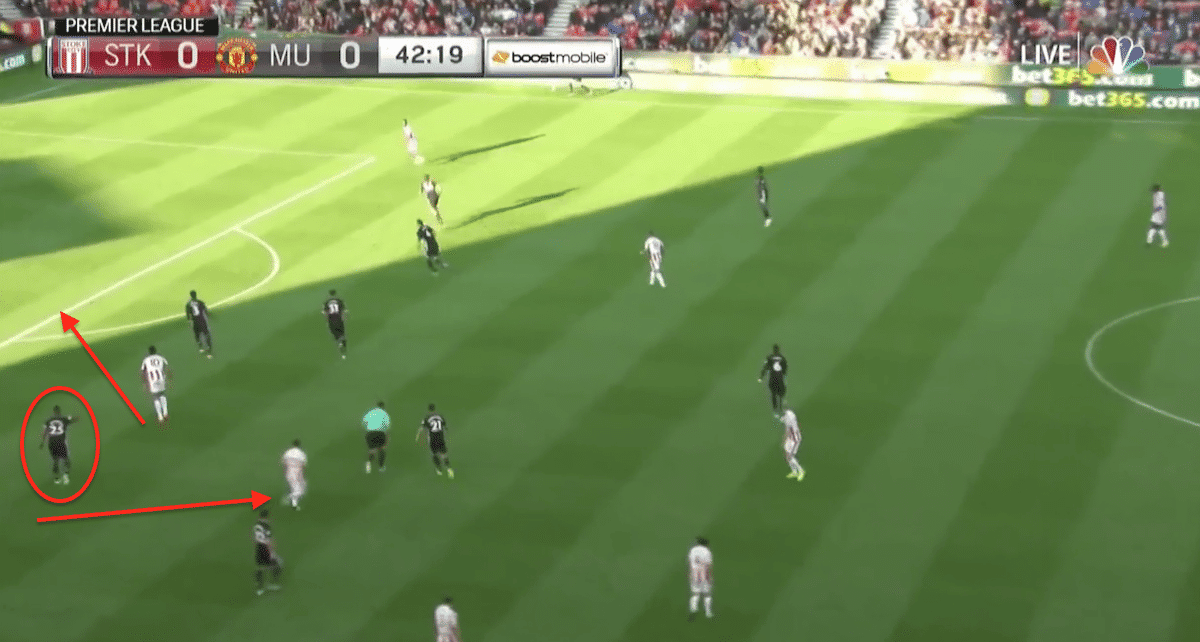 From the graphic, it’s not clear who Valencia is pointing for, as he is the closest man to the striker and should be tucking inside to prevent the danger.

There is no other attacker outside him, so Choupo-Moting is the nearest threat. 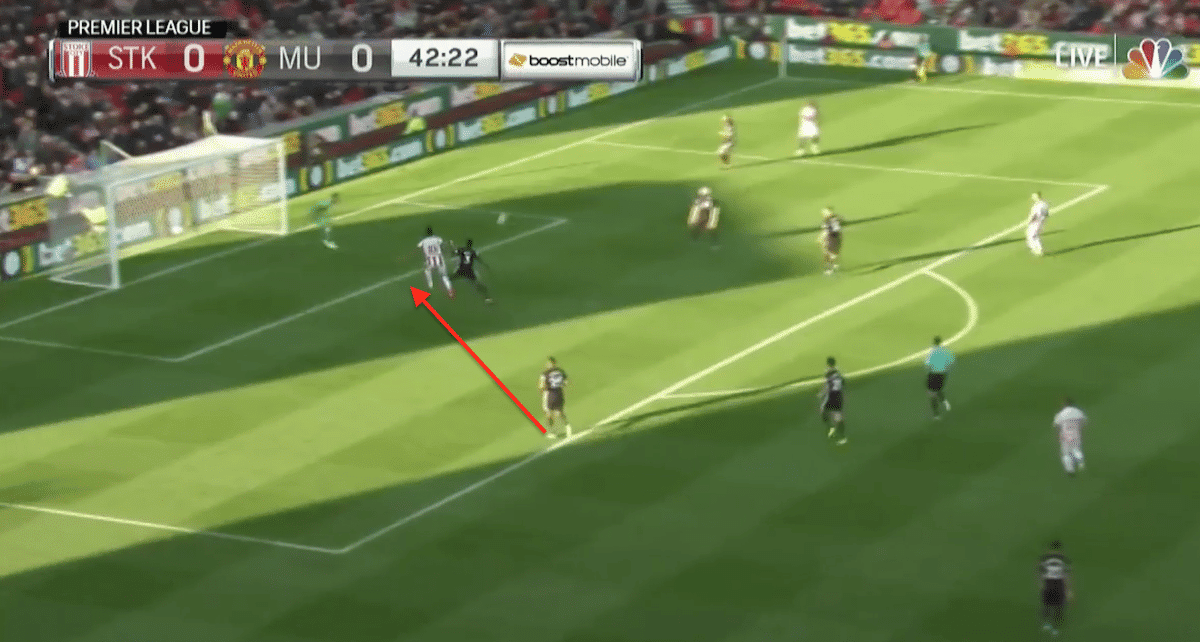 When the final ball comes in, Bailly hasn’t seen the striker’s run, so can’t react quickly enough and the right-back has made no attempt to recover, causing United to concede their first goal of the season.

It’s a chance that could have been prevented had Valencia tried to close down the run when he clearly saw it developing.

Liverpool thrive on getting the ball wide in those situations, looking to hit runners in the box.

Salah is likely to take on Ashley Young down the United left this weekend and if the Egyptian can use his pace to get past the other 32-year-old, he will look to deliver crosses into the box and then Valencia will have to deal better with runs made by the Reds forward line than he did with Choupo-Moting's.

Despite being one of the better defenders in the league on a week-to-week basis, Saturday’s challenge will give the clearest indication of what level Valencia is still at, although without the test of Mané's lightning pace, we may not fully see him tested to the same extent.

Mané is direct, extremely quick and loves cutting inside onto his right-foot, it's a bit like Arjen Robben. You know it's coming, but that doesn't mean you can stop it. 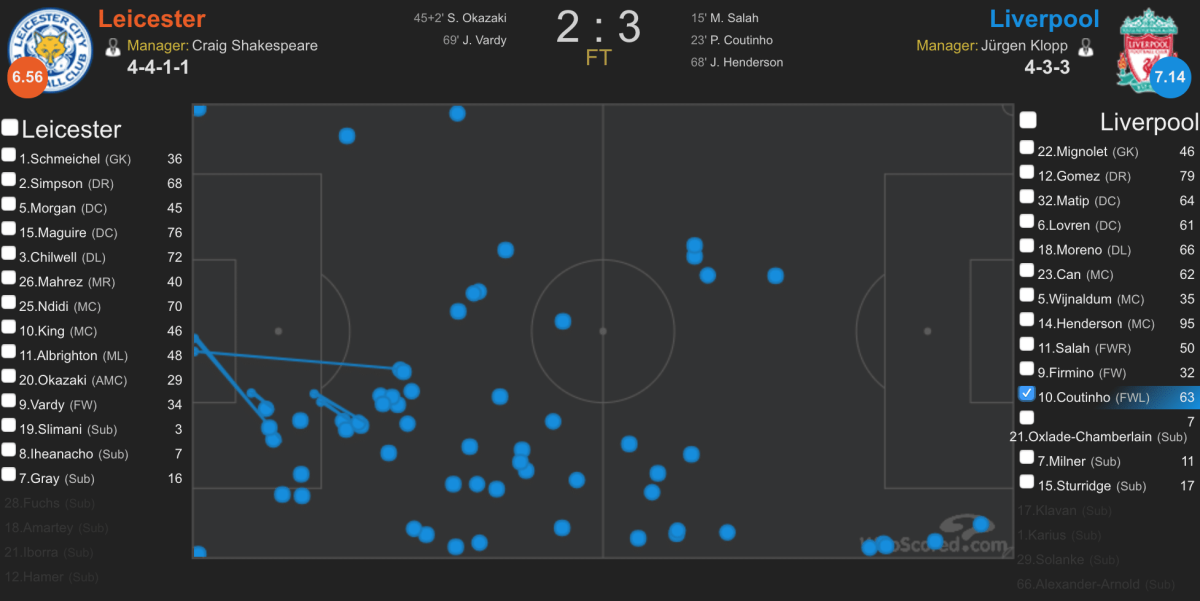 Looking at Coutinho's touchmap from the Leicester City win via WhoScored, and most of his work will come in front of the right-back. It's when the 25-year-old drifts inside to receive the ball that Valencia will have to be wary, looking for the movement of his team-mates.

That's what let him down for the Stoke goal, and it will be a problem on Saturday.

These types of games are built on little battles, and far from being a weak link in United’s overall team, in terms of match-ups across the pitch, taking on Valencia is one area of the field Liverpool could use to their advantage and take a foothold of this crucial fixture.

Even against Crystal Palace, in a game United dominated, there were a few examples of the right-back diving into challenges, getting caught out of position, offering the Eagles opportunities down the flanks.

Against a better club, with players capable of punishing you, those mistakes don’t go unnoticed, unlike when you win 4-0.

This season, the Ecuadorian is winning 79 per cent of his tackles attempted, but with 0.6 interceptions, he falls behind Young and Daley Blind in this area. Both Matteo Darmian and the Dutchman better him in terms of clearances, but no one gets their body in the way of more passes, crosses and shots than the 32-year-old. That could be crucial against the Liverpool attack.

Mané versus Valencia would have been fascinating, but how United deal with the guile of Coutinho is just as interesting. Liverpool will still need to ask questions of the right-back, but Mourinho’s man is a player for the big occasion and usually lifts himself for these types of tests.

If the cracks are genuinely beginning to appear, this is where the home side may find their best hope of breaking United down, but write off Valencia and his experience at your peril.