Liverpool could be set to head into the busiest time of the calendar year without Mohamed Salah.

The two-time Premier League Golden Boot winner is sitting out this international break after picking up another ankle, this time in the 3-1 win over Manchester City.

It was an innocuous challenge, with Fernandinho sliding in to dispossess the Egypt international, but it jarred the same ankle injured by

Ankle injuries have plagued Harry Kane over recent seasons and are notoriously difficult to shake without a sustained period of rest. Even then, there’s still a chance of a slight knock reinjuring it. Jürgen Klopp and his coaching team will have to carefully manage Salah’s recovery if they are to avoid unnecessary disruption to the second half of his season.

Sky Sports claim the return date for the Liverpool No.11’s return is uncertain but he’s a doubt for Crystal Palace on November 23. The Reds are famously vague when it comes to revealing the extent of injuries. A few weeks have, on more than one occasion, turned into a few months. Fans will be hoping this isn’t the case for the player with the most goal involvements for the team in the Premier League this season.

Liverpoool have 17 matches to play over the next 64 days, two of which are in the Champions League with the Reds not yet securing qualification from the group. It isn’t make-or-break for their season but a bad patch during this period could undo all their good work and change the landscape of the season.

The table-toppers have options in attack to cover Salah's absence. They aren’t in his league – very few are – but there is enough quality at Klopp’s disposal to piece together a front three capable of winning the majority of matches.

Divock Origi is often the first port of call when the forward line needs to be freshened up. The Belgian has three goals to his name this term and was one of the best players on the pitch when he filled in for Sadio Mané in the season-opener against Norwich City.

His direct play on the left caused the Canaries all sorts of problems and he showed his goalscoring instincts to drift into the box to nod home Trent Alexander-Arnold’s cross.

In general, however, it’s widely accepted he’s much better suited to being a super-sub. He may not be scoring goals but when Klopp brings him on, Liverpool tend to turn matches around. And it can’t be a coincidence.

Xherdan Shaqiri is the forgotten man of Anfield. Injury has dented his chances this term but he’s due back after the international break. Of all of the potential options, the former Stoke City man might be the best in terms of not disrupting the system too much.

Deployed on the right like Salah, Shaqiri drifts inside onto his favoured left foot and frees up space out wide. Space for the right-sided centre-midfielder or Alexander-Arnold to exploit.

The 28-year-old isn’t as potent as Salah – few, if any, are – but he can be just as creative as the one-time Roma man. Shaqiri has the vision and the ability to play incisive passes between the lines and lofted ones over the top of defenders. He could supply the ammunition for Roberto Firmino and Mané. 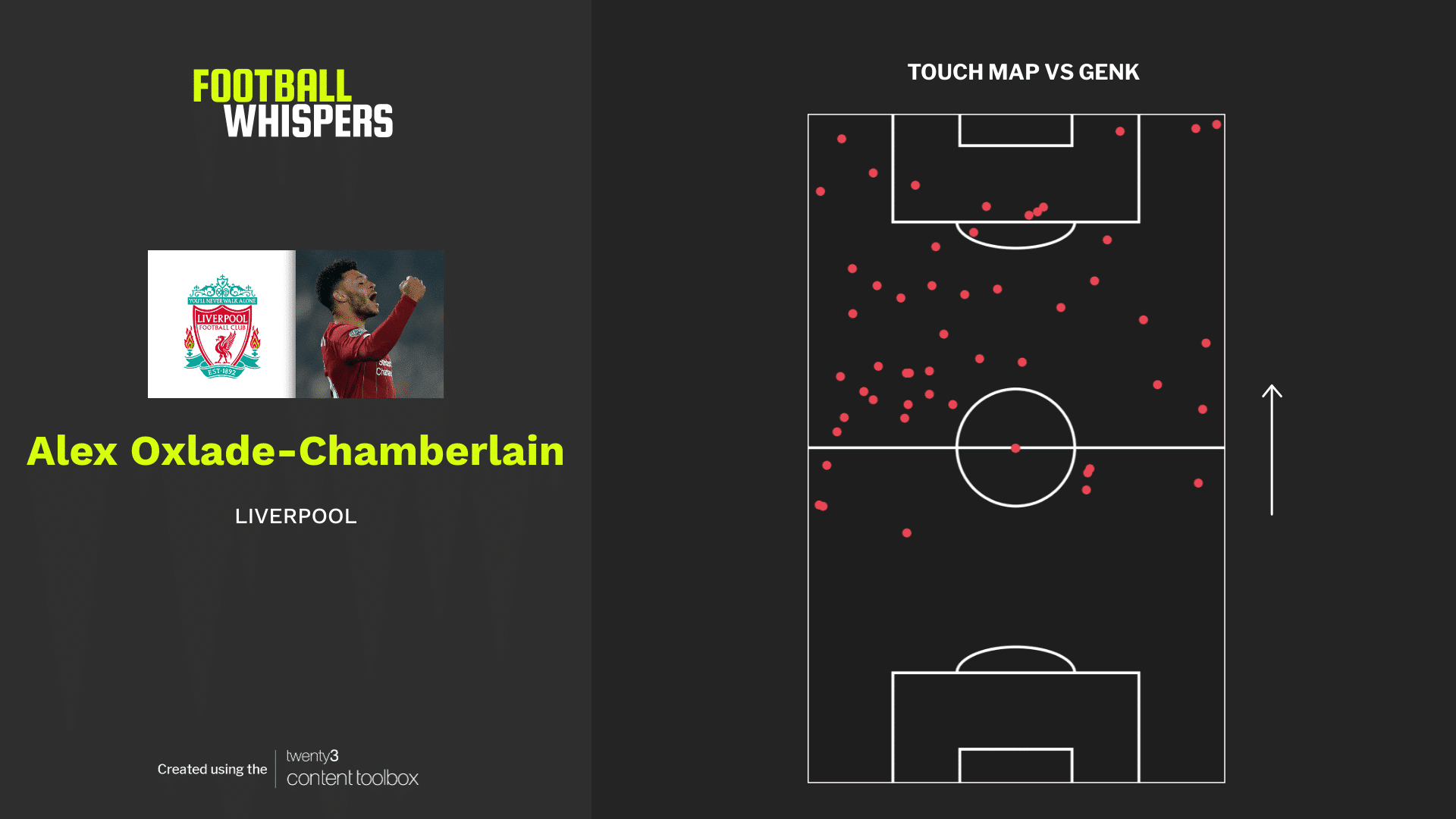 Alex Oxlade-Chamberlain is the most intriguing one of the bunch. His time in Liverpool's attack has largely been in wide areas. Against Genk, Klopp opted to use him as a false-nine.

As far as auditions go, it couldn’t have gone any better. The England international did his best Firmino impression, dropping deep to link with the midfield, chipping in defensively and generally being a nuisance in the final third. He scored what turned out to be the winner and looked lively in and around the area.

The former Arsenal man in superb form in front of goal, scoring for England in Thursday's 7-0 win over Montenegro. The 26-year-old has five goals in his last four starts for club and country. Another advantage to playing Oxlade-Chamberlain there is, of the three options, he’s by far the most versatile.

He can play on either flank, as well as centrally, meaning Klopp would be able to tweak the system in-game without wasting a substitute. It’s one of the underrated aspects of the usual front three used by the German tactician and having that option is often a game-changer for the Premier League leaders.

Being without Salah is a blow. It’d be a loss for every single team in the world. But Liverpool have the players to not just cope but to continue on with this rampant form they’ve shown since the start of the 2018/19 season.