Dietmar Hamman is many things but transfer oracle he is not. The midfield destroyer, who helped Liverpool lift the Champions League in 2005, isn’t heavily involved with the club so it’s difficult to envisage him getting much insider info when it comes to future transfers.

Yet the 59-cap German international, speaking to Sky Germany, revealed the Reds are weighing up the possibility of trying to bring Jadon Sancho to Anfield: “What I hear is that Liverpool have great interest in him [Sancho]. I would imagine that next summer they could become one of the biggest interested parties.”

While most titbits of information like this should be taken with a pinch of salt, this one could have legs to it.

Firstly, the Premier League leaders will be in the market for a wide forward this summer. Though Mohamed Salah and Sadio Mané are heading into their prime years, it would be naïve for such an intelligent recruitment team not to be working on the next phase of the team’s evolution.

By the end of the current campaign, both will be 28 and there’s no clear line of succession in sight with Harvey Elliott only turning 17 next April.

When the 2019/20 season ends, Sancho will be 20. He’ll have two full years of Bundesliga action under his belt – having only been a bit-part player during the 2017/18 season – as well as two Champions League campaigns. While he’s far from experienced, he’s got much more top-level action to his name than many other players his age.

He meets the criteria in terms of age and ability. He could call the right side of Liverpool's attack home for four or five years. That would allow Elliott or another potentially world-class player to ready themselves to takeover if or when he moves on.

The Nike factor also comes into play. If the Reds win their court battle with New Balance and sign a deal with Nike, they'll have an advantage when it comes to signing athletes sponsored by the mega-brand. Kylian Mbappé might be too adventurous but pairing one of England’s brightest talents with one of England’s biggest clubs seems like a match made in heaven.

Liverpool have the pull without Nike, as evidenced by their captures of Virgil van Dijk and Alisson despite interest from other clubs. 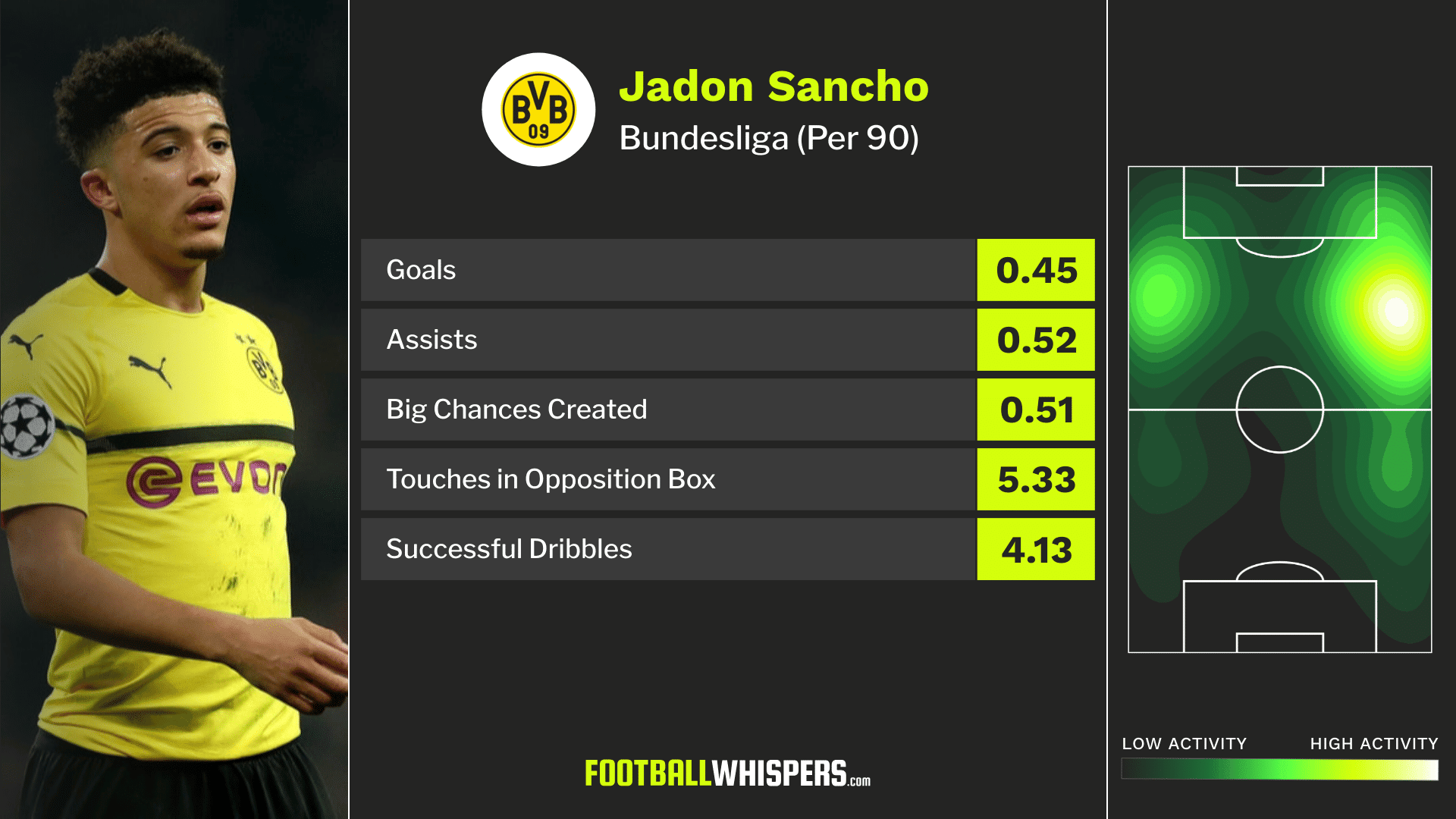 Sancho fits the age profile and he’s hugely marketable, something the Reds are keen to explore having seen how they wanted to negotiate the deal with Nike.

However, the only thing that really matters to Liverpool when it comes to recruitment is whether or not he’s someone who can be developed by Jürgen Klopp and his staff.

Sancho is one of the most exciting teenagers in world football. He’s a creative hub for Dortmund and in the 3,688 Bundesliga minutes he’s appeared in, he’s supplied 23 assists. Thats' better than an assist every other game.

But the 19-year-old is not just a creative force. He’s also a goalscorer and a ball carrier.

He’s terrorised Bundesliga defenders since making his debut. His per-90 averages are nothing short of exceptional and there’s a lot of intrigue over whether or not he could transfer what he does and have a similar impact on the Premier League.

The Dortmund No.7 has been involved in 0.97 goals in the Bundesliga per 90 minutes (0.52 assists plus 0.45 goals). He’s creating 0.51 Big Chances, too, which shows he’s a regular source of high-quality opportunities for BVB's attackers.

Unlike other wide forwards, Sancho is not shy about getting into the area either. His 5.33 touches in the box per 90 is an average usually posted by out and out strikers.

He’s quickly learnt the closer he is to goal the more chance he has of making something happen. Sticking to the touchline does himself or his team no favours.

The one-time Watford youngster is also a proficient dribbler, completing 4.13 take-ons per 90. It puts him in the same sphere as Wilfried Zaha (3.34) and Eden Hazard during his final season at Chelsea (4.24). The difference in league quality has to be taken into account but that shouldn’t detract away from Sancho’s impressive numbers.

Sancho has proven himself to be one of the most destructive wide forwards in the world. He shares similarities with both Salah and Mané, which could mean he eventually replaces either. On paper at least, he’s a dream signing for the Reds.