For opposition sides, playing against Liverpool last season was like facing the mythical many-headed serpent Hydra; stop one threat only to find two more that would instantly cause you trouble.

The front three were devastating. Mohamed Salah netted a record-breaking 32 goals during the 2017/18 Premier League campaign, with Roberto Firmino and Sadio Mané adding another 25 put together.

Those numbers are hard to keep up and it says a lot about how strong the Reds were last term that, two months in and level on points with first place, people are worrying about the form of their front three.

However, compared to this time last season, the trio have exactly the same amount of goals; nine. Salah has one fewer and Mané has one extra but other than that things are remarkably similar.

Liverpool’s front three has often been discussed in recent weeks, but really it’s Salah that everyone is concerned about.

He was emblematic of the side last season; the embodiment of Jürgen Klopp’s fast-paced, ruthless football. It's perhaps why when Salah’s season was ended by Sergio Ramos in the Champions League final, so was Liverpool’s.

The Egyptian was an extraordinary finisher last term. He was at a level that, in truth, was unlikely to continue.

Looking at the quality of all his shots, for every expected goal he had to his name he was scoring 1.58. This season it’s swung completely the other way; for every one expected goal, he’s struck just 0.58 actual ones.

Looking at his shot map, one can see a mass of attempts in the middle of the box that he hasn’t scored from. Importantly, though, if he keeps getting these chances the goals will come. 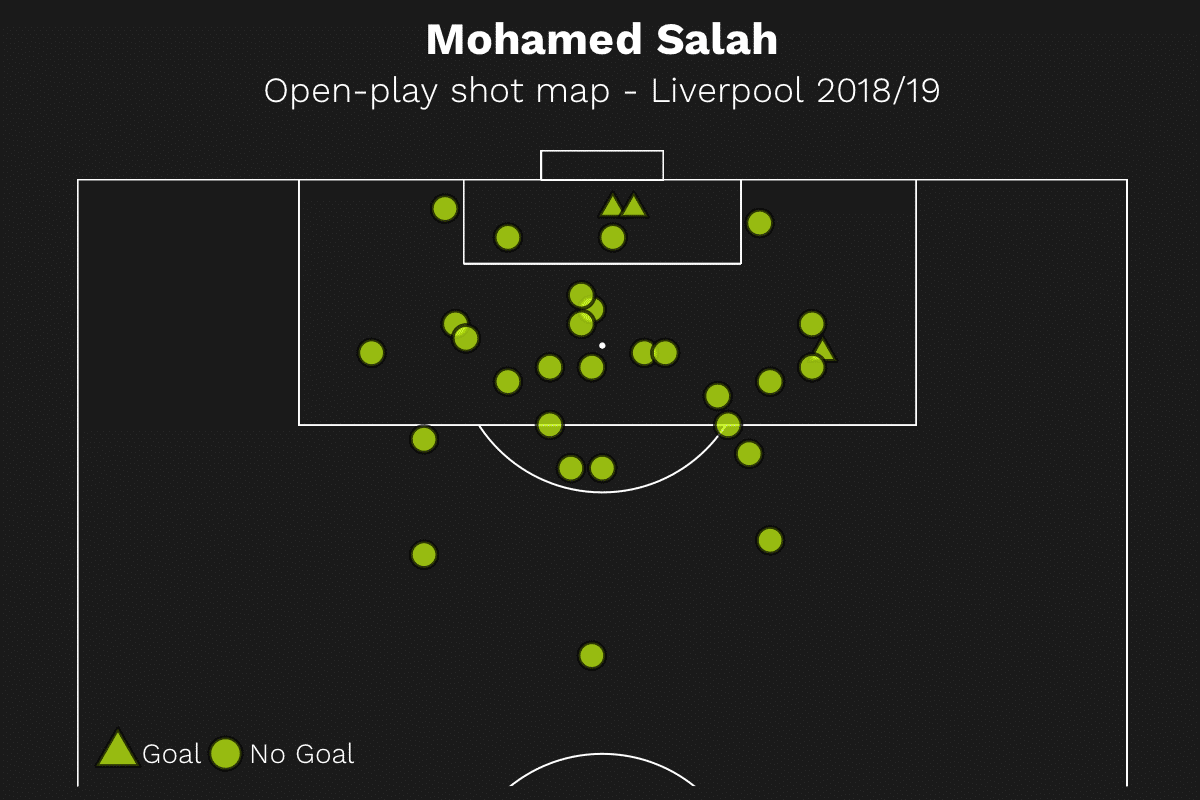 The above is a much different picture to this stage last season, where most of his shots had come from cutting in off the right.

The Egyptian’s role has changed slightly between over the last year, which may be part of the reason why there are questions around him. Even if he’s still getting chances, they may not necessarily look like Salah chances. 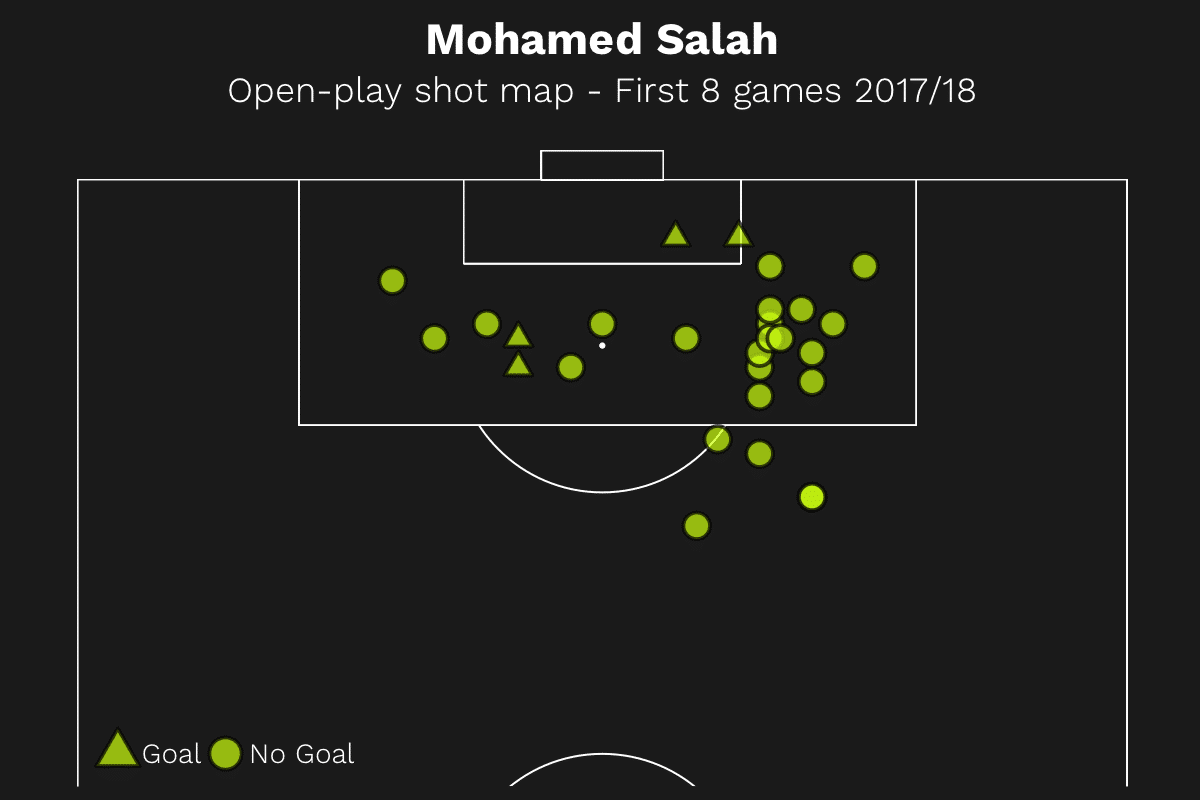 But still the goals will come.

Salah’s story – in that he’s not on a hot streak – applies to Firmino and Mané as well. Both struck more goals than expected in the first eight games of last season, but this term Firmino is back down at expected levels and Mané is just a little above it.

Both are taking slightly fewer shots and touches inside the opposition box than last season as a whole, but the drop-off isn’t major.

By and large, it looks like the Liverpool front three are more or less as good as last season, especially when taking into account a recent run that’s seen them play Tottenham Hotspur, Chelsea, Napoli, and Manchester City in the span of a few weeks.

One factor that hasn’t been widely discussed, and that might also be part of why Liverpool might look less threatening, is the midfield.

In previous seasons under Klopp, the central midfield has always included one player who has joined in regularly with the attack, whether that be Adam Lallana, Philippe Coutinho, or Alex Oxlade-Chamberlain.

Things have looked a little more structured this year, perhaps with Klopp more concerned about defensive solidity, rather than allowing his midfielders to propel themselves towards goal.

Take Oxlade-Chamberlain as an example. In 2017/18 he registered 2.45 shots per 90 minutes and took 3.07 touches inside the opponent’s box per 90. No Liverpool central midfielder is doing that so far in this campaign.

Part of the reason for the restraint is the tough run of games that Klopp’s side has faced in the past few weeks, and it’s something that the manager touched upon after the clash with Manchester City at Anfield.

“All these teams we’ve faced in the last few weeks, apart from Southampton, we had to work against the ball, and then you need to be perfectly organised,” Klopp said.

All of this means Liverpool fans can be hopeful of a more familiar situation after the international break.

The midfield should be freed a little more, new signings Naby Keïta and Fabinho should see more game-time, and Salah should come out of his cold streak.

So Liverpool's Hydra is fine. Which is not great news for the rest of the league, mind.