Liverpool and Arsenal meet in the Premier League at Anfield with the Gunners hoping to bounce back from last week’s defeat at Stoke City with a win against one of their top four rivals.

Jürgen Klopp’s side, meanwhile, are on a high following their free-scoring Champions League play-off victory against Hoffenheim, which saw them qualify for the lucrative group stages.

Liverpool’s last three games have come against sides playing a back three — a system which Arsenal have used in all three of their games so far this season.

This weekend’s fixture could see several players return to the ranks for Arsene Wenger’s team, so there’s a possibility that the presence of the likes of Alexis Sanchez and Laurent Koscielny within the squad could see a change in formation too.

Liverpool vs Arsenal | Head to Head Preview… by FootballWhispers

On the other hand, the experienced Frenchman could stick with his current system and hope that the returning players help to solve any problems they currently have.

Their opponents have had plenty of practice against this formation, and could use it to their advantage.

The image below shows the shape of the Arsenal team just before they conceded the goal which defeated them at the Britannia stadium. 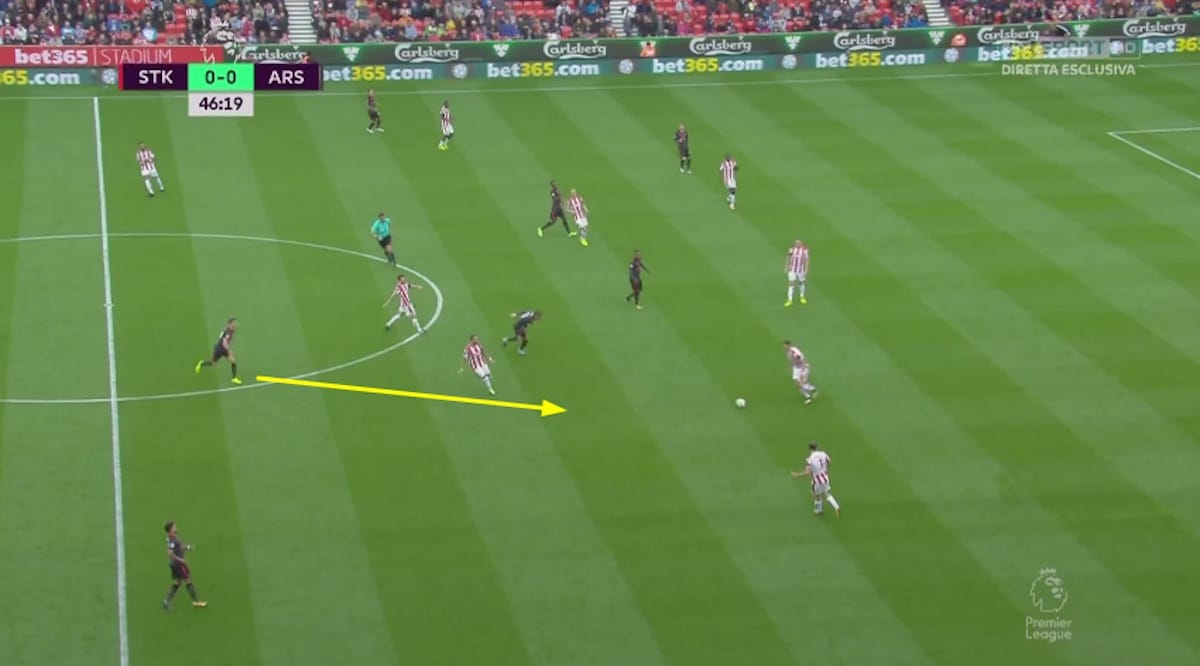 Granit Xhaka springs from his defensive midfield position to try to initiate a counter-press, but he’s alone in doing so, bursting so far up the pitch that he’s eventually closing down Stoke centre back Geoff Cameron.

As a result he leaves a huge space in behind which Mesut Özil tries in vain to run back and cover once Cameron feeds the ball to Jesé into midfield. 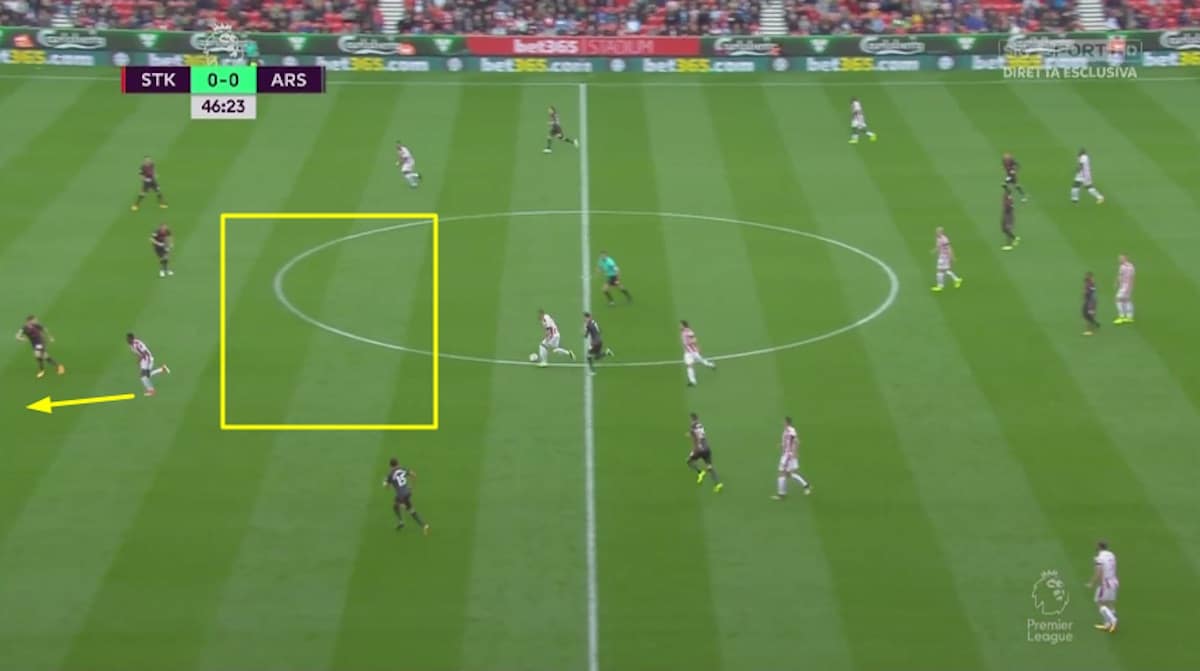 The back three are now exposed with Saido Berahino making a run down the left to drag Shkodran Mustafi out of position.

The English forward receives the ball from Jesé who continues his run ahead of Özil, who is now lagging behind, as are the rest of the covering players, meaning Stoke have a 3-on-3.

Berahino waits for the right moment before playing the through ball behind Mustafi for his team-mate, who has the run on Nacho Monreal to get the shot away and score. 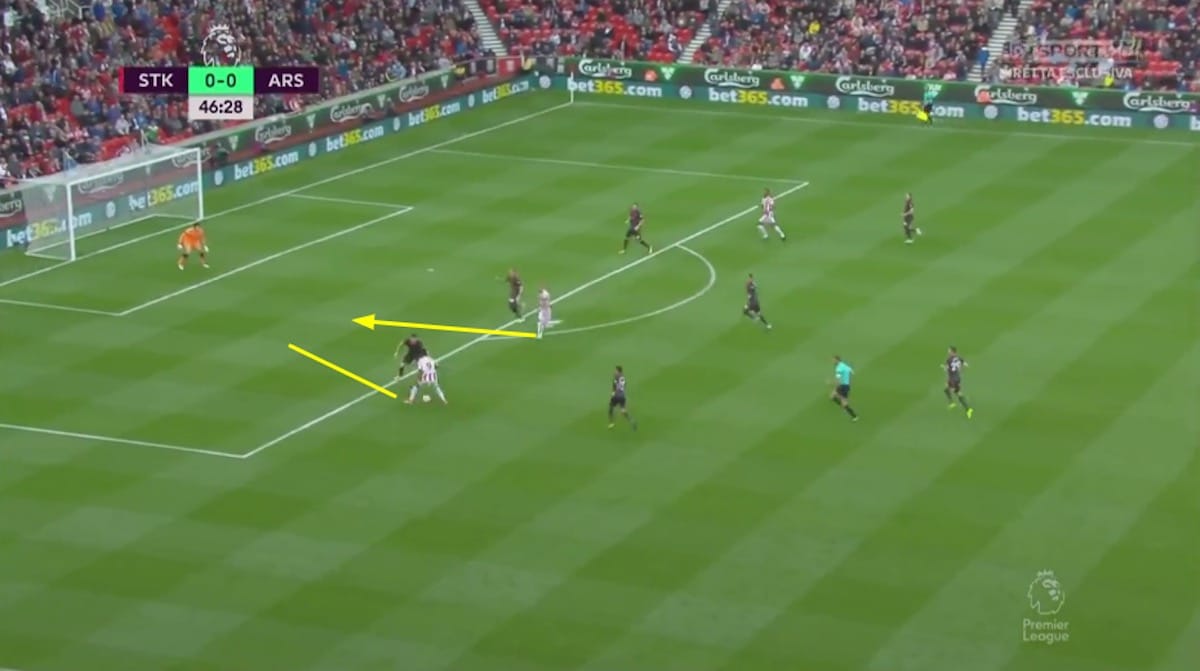 There are some similarities between this and the lack of protection the Liverpool defence are given from their own midfield, which can often lead to goals down the flanks when the full backs are pushed up high.

But there are also similarities with this and the way Klopp's side dismantled Hoffenheim's back three, and to some extent the back three of Crystal Palace in the previous game.

Though the score against Palace was only 1-0, new left back Andy Robertson created plenty of chances down the left for Liverpool.

Against Hoffenheim this left-sided dominance was even more apparent, as Sadio Mané ran riot, with help from Robert Firmino, Alberto Moreno, Mohamed Salah stretching the play on the other side, and the midfield runners.

The first goal came as Mané was able to find himself one-on-one with Havard Nordtveit.

Firmino created the space to leave the back four exposed, and as Jesé did against Arsenal, he was able to free his team-mate to attack the back line down the left channel. 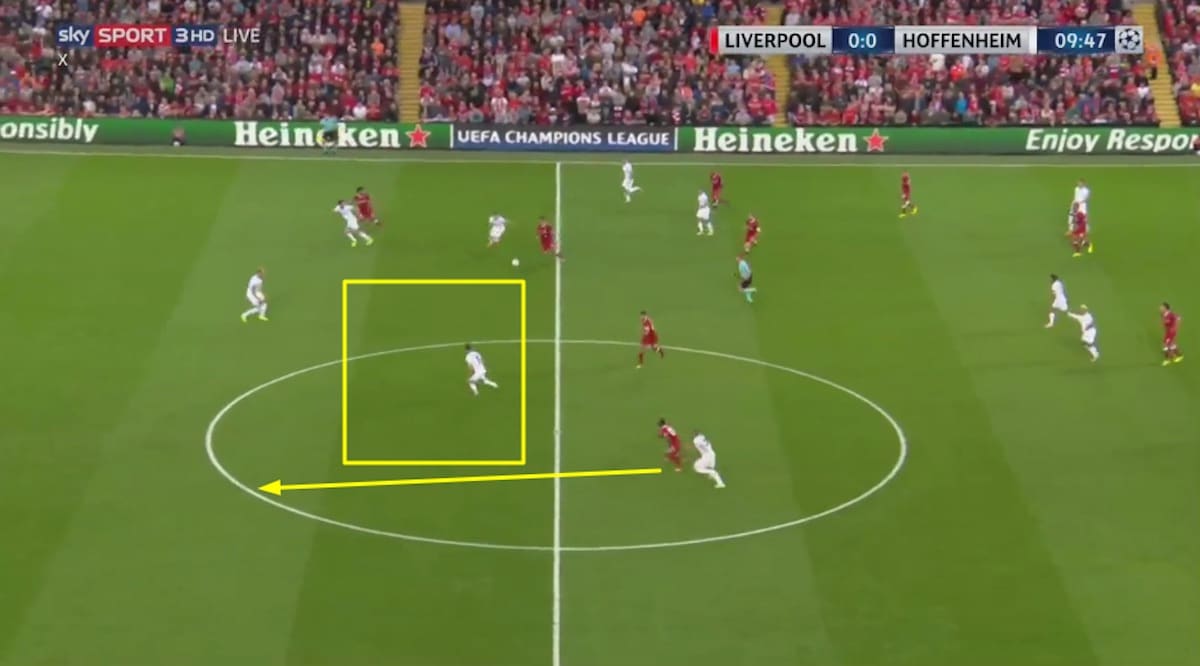 This situation was different to Stoke's goal in that Mané used his pace to sprint behind the defence, before holding the ball up to allow a runner from midfield, Emre Can, to score the goal.

But there is still the common theme of isolating a wide defender after the midfield has been eliminated, and then having more than one player breach this vacant space with a run into the box as shown below. 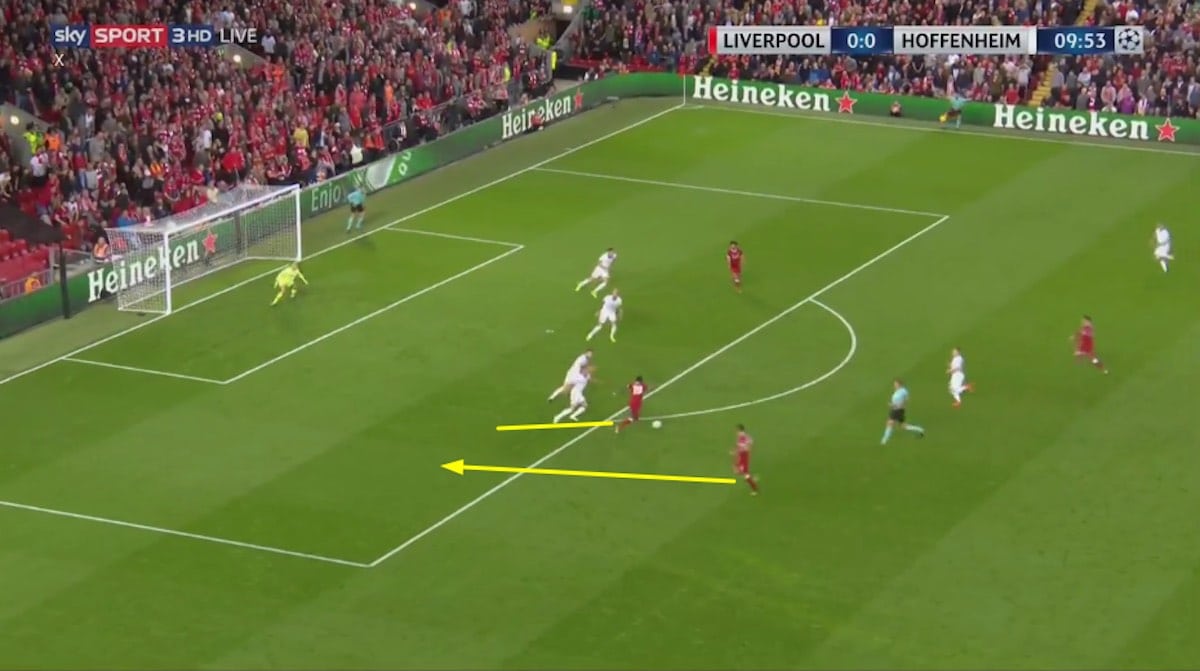 Liverpool will hope to have similar success against Mustafi as they had against Nordtveit, which eventually forced Hoffenheim coach Julian Nagelsmann into a change; but it was too little, too late.

Nordtveit was replaced and the Germans changed to a back four but, even so, the average positions (via WhoScored, below) of the players throughout the game still hints at the back three which started the game, and shows the Norwegian's isolation on the right hand side (No 6). 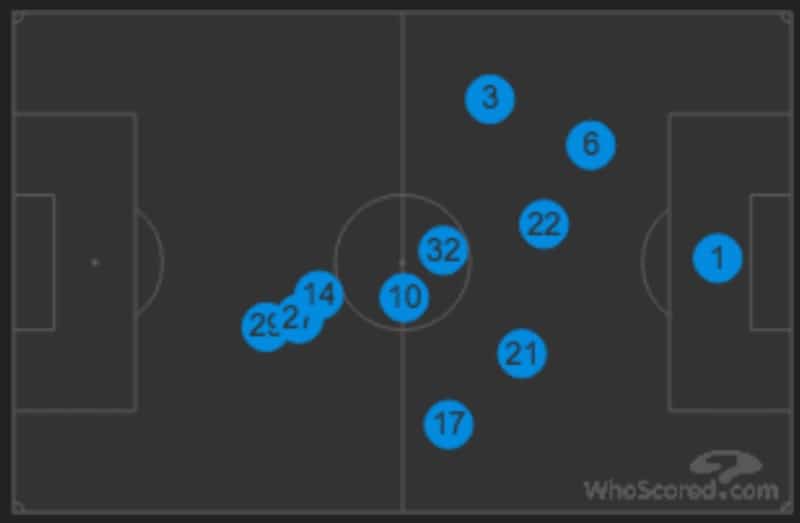 Compare this to the average positions of the Arsenal players against Stoke where even though Mustafi (20) is pushed higher up the pitch he's still isolated, and there's a large space between him and Monreal (18).

What's more, the high back line of Arsenal could play into Liverpool's hands even more than Hoffenheim's tactics did in that opening 25 minutes of the Champions League tie. 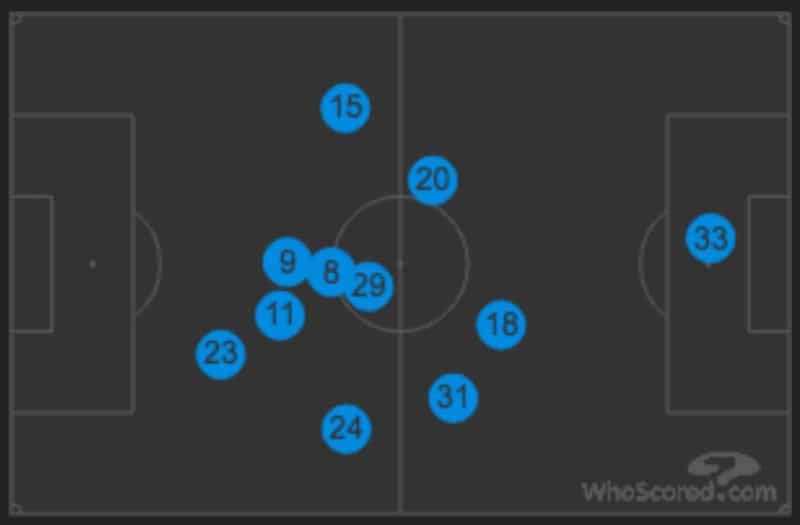 Given the quality of the attacking threat posed by both sides, this game could come down to which set of midfielders do the best job positionally; covering for their full backs as well as maintaining a shield in front of the central defenders.

Klopp commented in his pre-match press conference that he liked the fact his number 8s were getting into the box against Hoffenheim. Can scored two goals from midfield, and the second goal was scored after Georginio Wijnaldum hit the post with a shot in the area.

With a pair of midfielders looking to attack, Liverpool will need to make sure they they don’t leave gaps in front of their own defence, and a lot of responsibility will lie on the shoulders of the deepest midfielders of both sides.

With Alexis Sanchez back in their squad Arsenal could threaten the Liverpool defence in the same way, but the double-speed of Mane and Salah, and the double-think and ever-impressive intelligent forward play of Firmino could give the home side the edge.