Charlie Taylor will leave Leeds United for the Premier League this summer with Liverpool and West Bromwich Albion heavily linked. But the 23-year-old will do so in acrimonious circumstances after refusing to play in Leeds' final Championship game of the season.

“There’s no sugar-coating it,” Former Leeds boss Garry Monk said after drawing at Wigan Athletic in May. “Charlie refused to play the game and I think he’s been terribly advised in this instance. I think he’s been poorly advised all season to be honest, from the outside. We’ve tried to guide him and help him. He’s a young lad and a very good lad but he’s a bit naïve.

“He’s acted naïvely, not with any bad intention, but he’s been terribly advised. To refuse to play the game, as a club and as a manager, is unacceptable.”

Taylor's contract at Elland Road is up this summer. He had a transfer request rejected in August. His intention to leave is quite clear. But with Premier League clubs interested, who is he and is he worth the trouble?

Born in York, Taylor joined Leeds United's Academy aged nine. He turned pro midway through his first season as a scholar, signing a three-year contract, and was handed his first-team debut at 17 as a substitute against Bradford City in the League Cup.

Taylor did enough to earn his league debut a month later, providing an assist for Ross McCormack in a 3-2 win over Crystal Palace – highlighting his ability with the ball at his feet. Ability which had been clear since he won the LFE's 2010/11 Academy & Youth Alliance Goal of the Season for a stunner against Newcastle United.

Regular left-back Aidy White regained his spot in the side following suspension but Taylor had done enough to earn an England Under-19 call-up for the Limoges tournament. Taylor played two of the three games as the Three Lions were victorious in France.

Back at home, chances were limited and Taylor spent time on loan at Bradford before the season was out. The following campaign was a similar story and Taylor was loaned to hometown club York City and Scottish Premiership side Inverness Caledonian Thistle.

The 2013/14 campaign was Taylor's breakthrough. He joined Fleetwood Town, then of League Two, on loan for the season and helped the Cod Army win promotion, playing in the play-off final at Wembley.

Taylor played 42 times in all competitions that season and Dave Hockaday had clearly seen enough, handing Taylor the number 21 shirt and a place in Leeds' first-team squad for the 2014/15 campaign.

It was a tumultuous season with controversial owner Massimo Cellino dispatching with the services of four coaches. But Taylor provided a chink of light for long-suffering Whites supporters by making 25 appearances. And he has not looked back since. 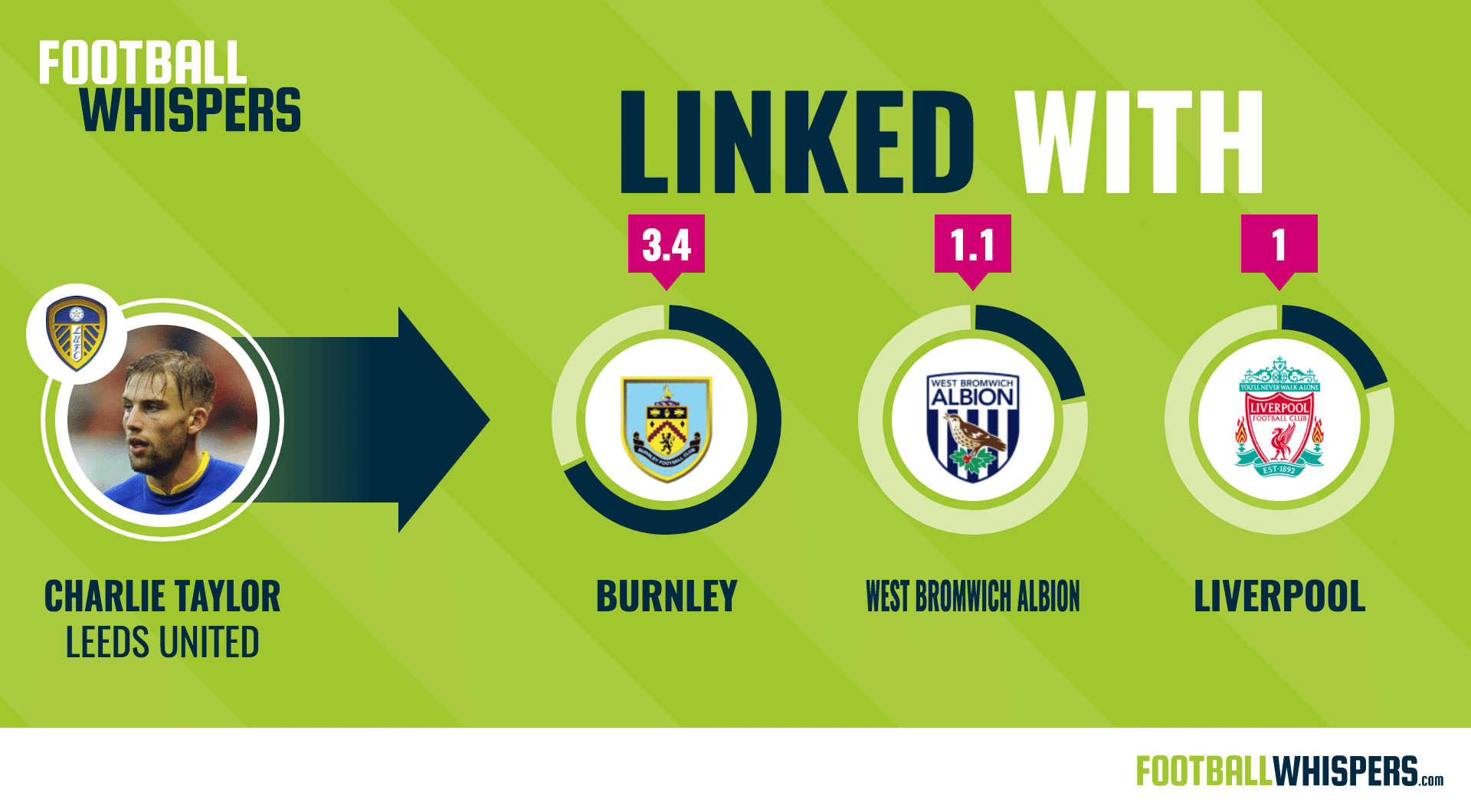 As is a pre-requisite with all modern full-backs, Taylor is comfortable with the ball at his feet and contributes to Leeds' attack. He has supplied eight assists from left-back in the last three seasons with his dribbling and crossing particular strengths.

In the still below, taken from Leeds' 1-0 win over their then play-off rivals Reading, Taylor bursts between two defenderS and into the 18-yard box to win a penalty for his side. 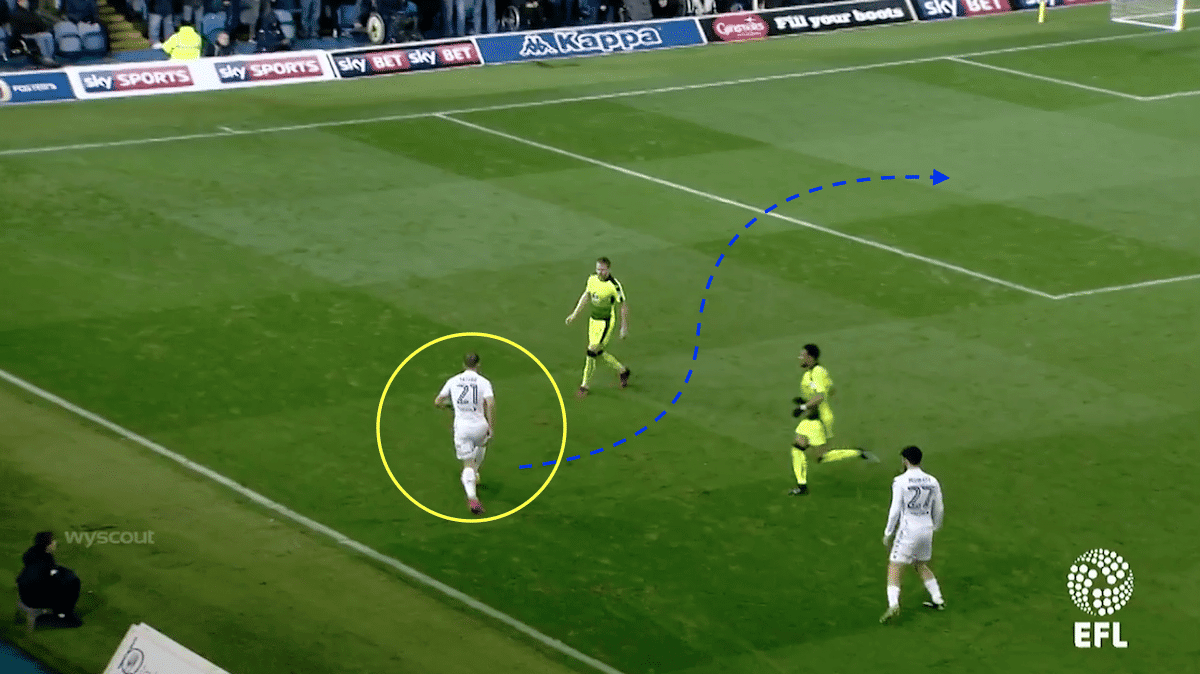 What makes Taylor's efforts even more impressive is the timing in the game. It is the 90th minute and Leeds are already 1-0 up. Yet the young left-back shows great desire to drive into the box and get something for his side. 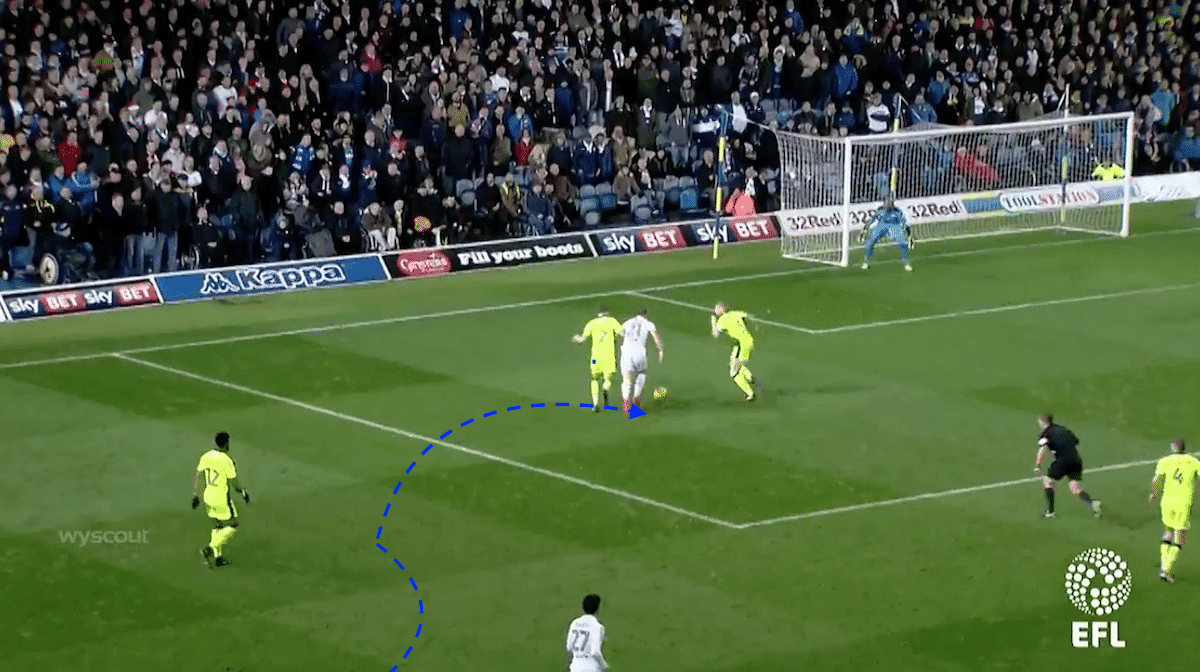 In the still below, against Ipswich Town, Taylor makes an option on the overlap. The Tractor Boys' defence is not alert to the danger and Taylor drives into space. 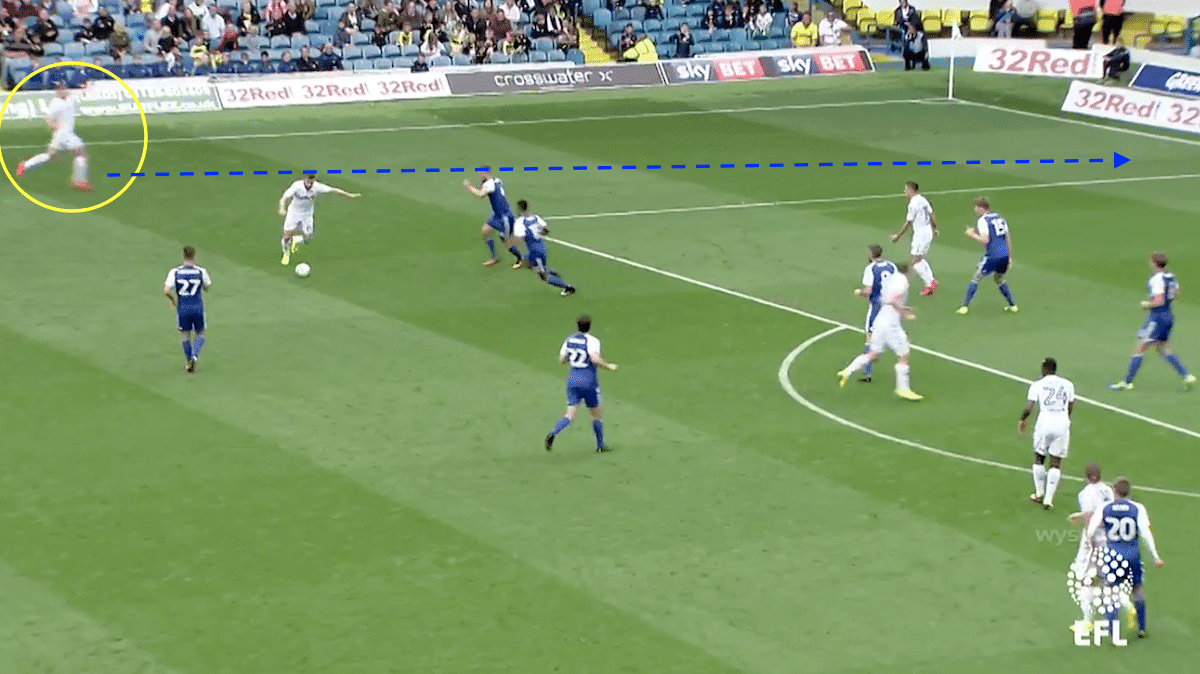 Having steadied himself he dinks an inviting cross in for Chris Wood who heads home what proves to be the winner for United. Taylor has supplied three assists this season, including for Wood in Leeds' win over Brighton & Hove Albion in March. 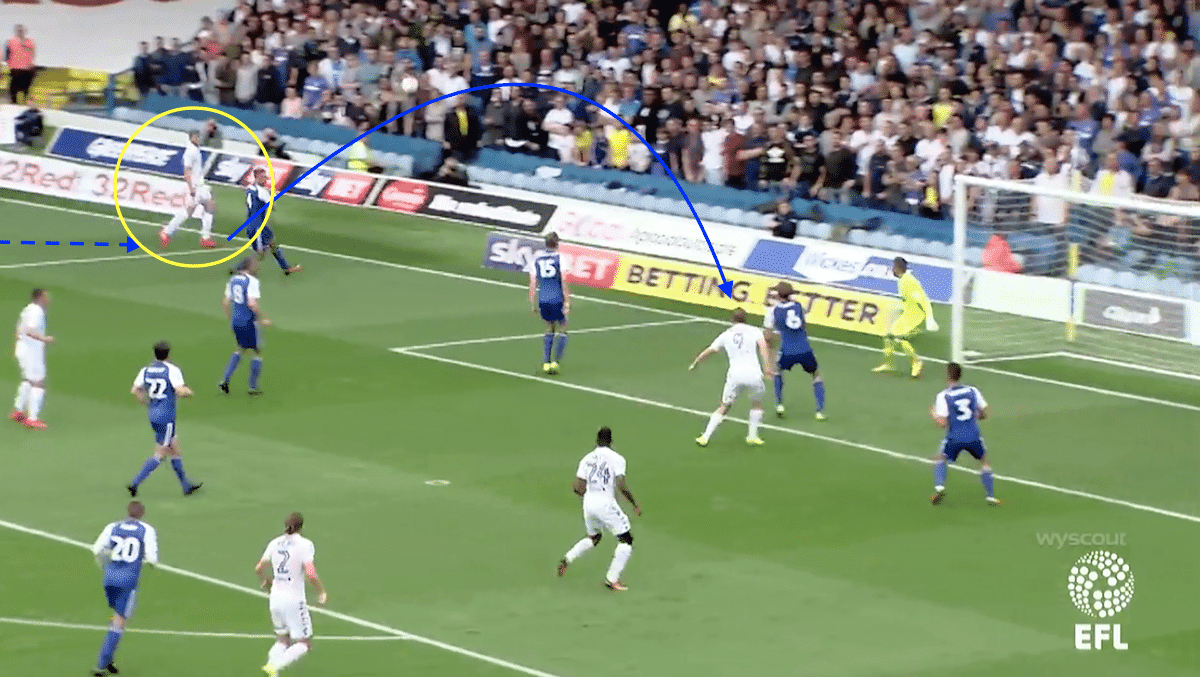 But Taylor is not about bombing forward and abandoning his defensive duties. He is a good tackler and in the image below, taken from Leeds' home defeat to eventual champions Newcastle United, he demonstrates this.

Having given possession away cheaply by passing the ball to Jack Colback (circled in red), Taylor quickly reads the path of the Newcastle player's pass and intercepts before it reaches Matt Ritchie (11). 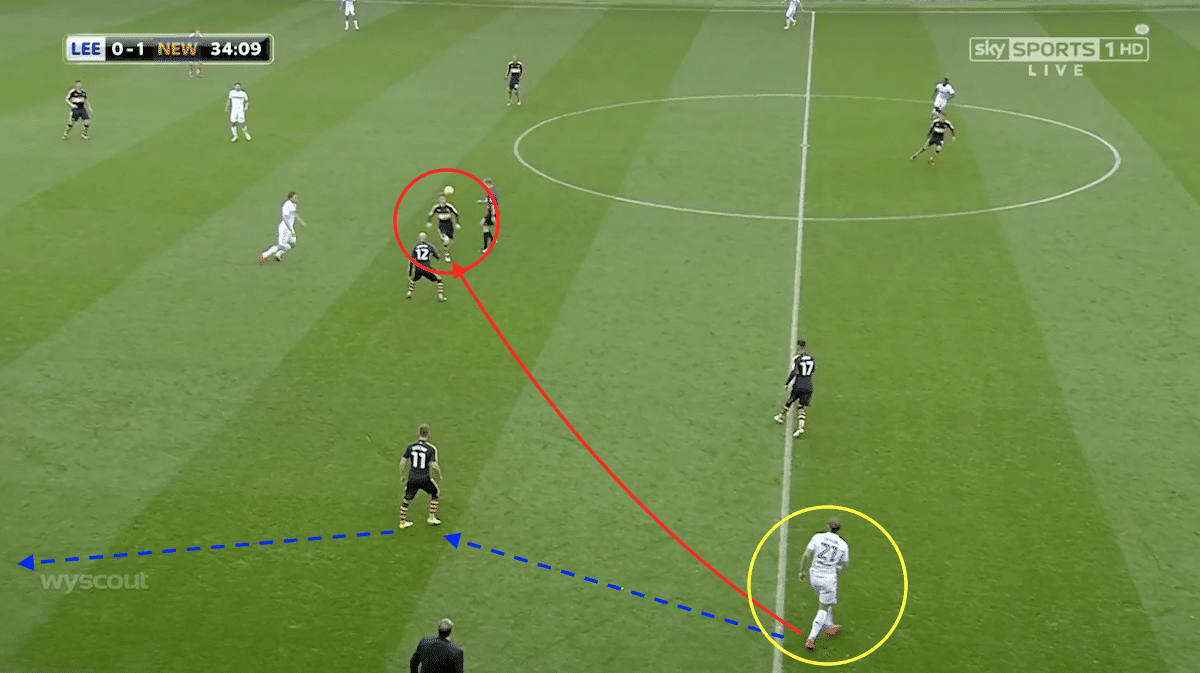 Instead of thinking his work is done, Taylor sprints forward down the left-hand flank and, despite close attention from two Newcastle defenders, wins a throw for Monk's men deep in the visitors' territory. 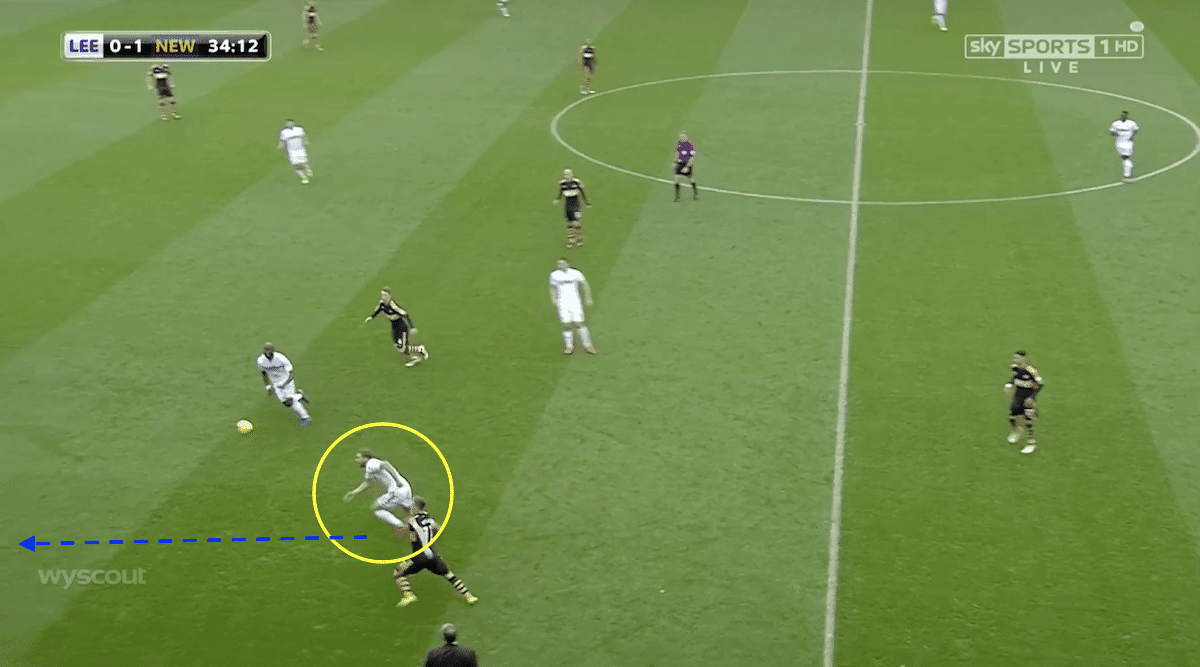 Positionally Taylor could do with some improvement. He has a tendency to get caught out by balls in behind and his awareness of attackers exploiting that space is lacking.

In the still below, taken from a 1-0 win at home to Brentford, Taylor is caught out again. He is caught square and the ball is hooked over him by Ryan Woods for Scott Hogan. 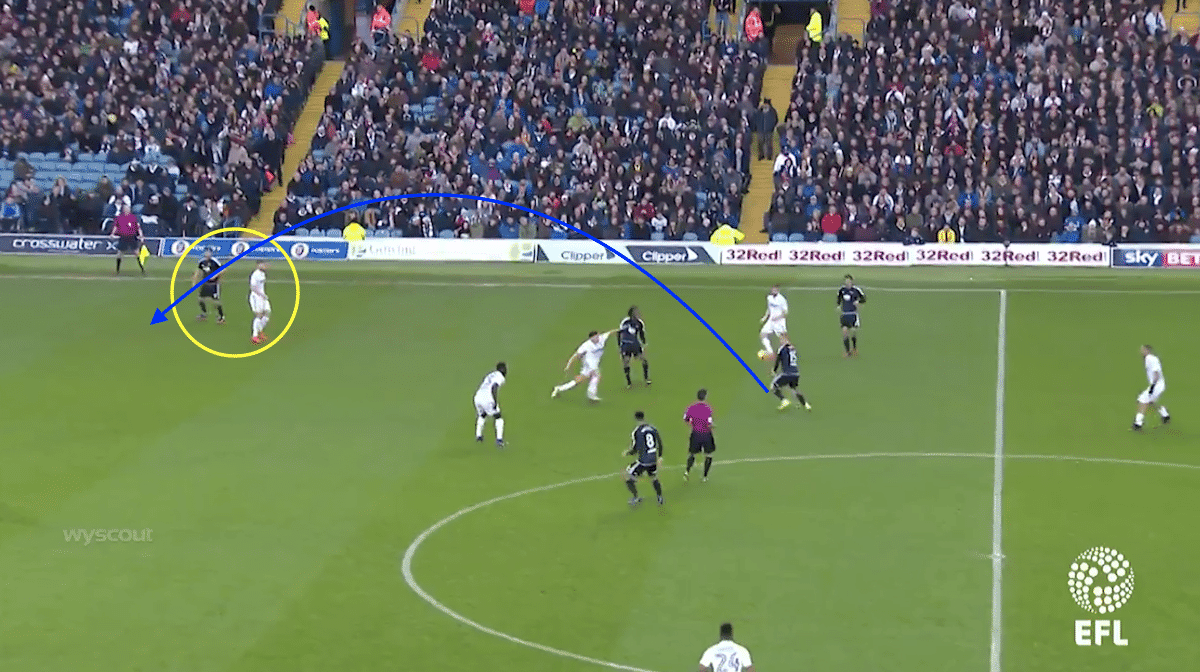 Positional shortcomings are unsurprising given Taylor likes to get forward and support the attack. In the image below, taken from a 2-0 defeat at Brighton & Hove Albion, Taylor is caught up the field when the Seagulls break and the ball is played into the channel he should be protecting. 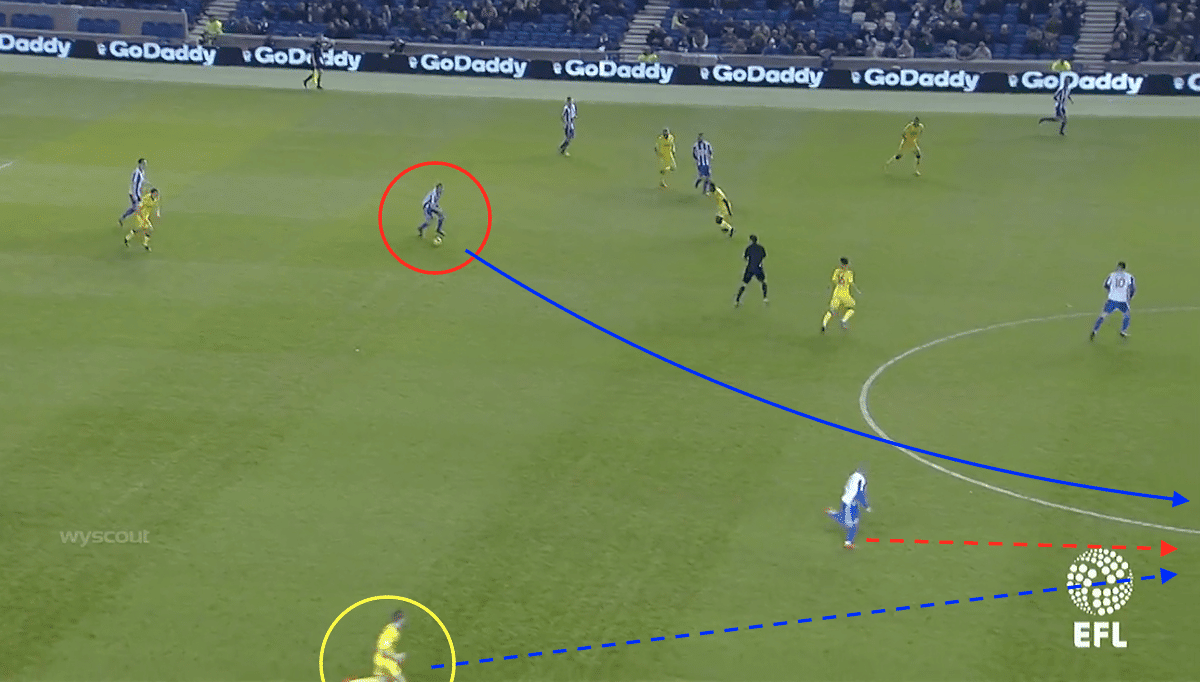 However, the Yorkshire native has the pace to get himself out of trouble more often than not and given his predisposition to attack, that is a useful attribute.

After more than 100 appearances in the EFL it is time for Taylor to take the step up and try his luck in the Premier League.

Given the hype around him for the last few years it is a surprise Leeds' 2015/16 Player of the Year has had to wait until now for his big move. Perhaps that is why he has grown impatient and, in the words of Monk, acted naïvely.

He is a modern full-back, capable of playing as an auxiliary winger but without ignoring the defensive aspect of his role. And at 23 he should only improve under the right manager.

While a switch to reported suitors Liverpool would be extremely tempting, Taylor would be better served getting regular top-flight action at a lesser light. West Brom boss Tony Pulis has made his interest clear but admits the fact any deal will go to a tribunal adds an element of risk.

“He’s one of the players we’re looking at in respect of left-backs but he’s not the only one,” Pulis said in March.

“He’s a possibility. The problem with that one is it would go to a tribunal so we’re not exactly sure what the fee would be.

“So that would be a difficult one but he’s one we have talked about.”

Taylor will hope for better advice this summer.