It’s a phrase muttered almost every year but the 2019 summer transfer window could be the one to shape Liverpool’s future.

However, whereas in previous seasons it was clear the Reds needed to make improvements in certain areas, this summer it’s more about improving the tier of players below Jürgen Klopp’s core group.

Get that right and Liverpool are in a good place to compete for the Premier League title yet again. Get it wrong and it’s difficult to envisage the Reds competing on all fronts next season.

Granted, it’s difficult to improve on a 97-point league campaign and a sixth European Cup. But with others not standing still, Liverpool can’t afford to rest on their laurels.

It’s all about marginal gains at this level. That extends to off the field activities, too. Being able to sell players with no future at the club to fund potential arrivals is key to this. One such player who could fall into this category is Adam Lallana.

He’s tentatively been linked with a move away but when asked by Sky Sports following Liverpool’s triumph in Madrid he put to bed those rumours.

“Yeah. Absolutely no question about it. I couldn’t be happier here, winning Champions Leagues.  It’s pinch yourself stuff. And more to come, a lot more to come. I’ve got a year left on my contract. I’ll be back, I’ll be training through the summer.

“I am as eager as ever to get fit because I know when I’m fit I’ve got a lot to give and I can get in this team.”

While Lallana’s attitude is admirable, it shouldn’t be what saves him from departing Anfield. Liverpool need to be ruthless. Getting a transfer fee for him would be good business, as would be getting his wages off the books.

The former Southampton captain was an integral part of Klopp’s initial Liverpool team. His flexibility and work rate made him one of the German’s favourite players and it was under the ex-BVB tactician that Lallana showed his best ever form during the first half of the 2016/17 campaign.

But times have changed. Liverpool have moved on as a team. Though that version of Lallana would have a place in Klopp’s plans, it’s hard to imagine where the Liverpool No.20 fits in now because it’s been so long since he had a run of games.

Nobody knows what he’s capable of, not even the player himself, purely because his body can’t be trusted these days.

Since arriving in the summer of 2014, Lallana has played, roughly, 6,900 minutes in the Premier League from the 17,100 on offer. Around 40 per cent. Of course, he’s not missed every match because of injury but according to transfermrket he has missed 70 games directly linked to an injury since joining.

But even when fit in recent seasons, he's hardly contributed.

Since New Years Day 2017, the 31-year-old has one goal to his name. He was named as one of the reasons Liverpool were happy to let Philippe Coutinho move to Barcelona in January 2018. Yet since the Brazilian’s departure, Lallana has appeared in 980 minutes of play.

You could argue he's not been able to replicate the form he showed at the start of 2016/17 because he hasn't had a sustained run in the first-team. This is true.

However, Liverpool are no longer in a position were they can start a player who isn't fit and is out of form. Competing at the top takes away such a luxury. Simply put, if Lallana isn't starting it's because he's not doing enough in training to suggest he warrants a place in Klopp's XI.

The argument to keep him for the final year of his deal veers into Dejan Lovren territory in the sense it is centred around whether you can find a player of similar quality for, say, £20million.

It would be difficult to find someone to replace Lovren for such a fee. It'd be near impossible to replace 2016/17 Lallana for £20million but that isn't the challenge.

Replacing a high-earning squad player who is rarely available for £20million is something you can do. And that should be how such a decision is viewed. 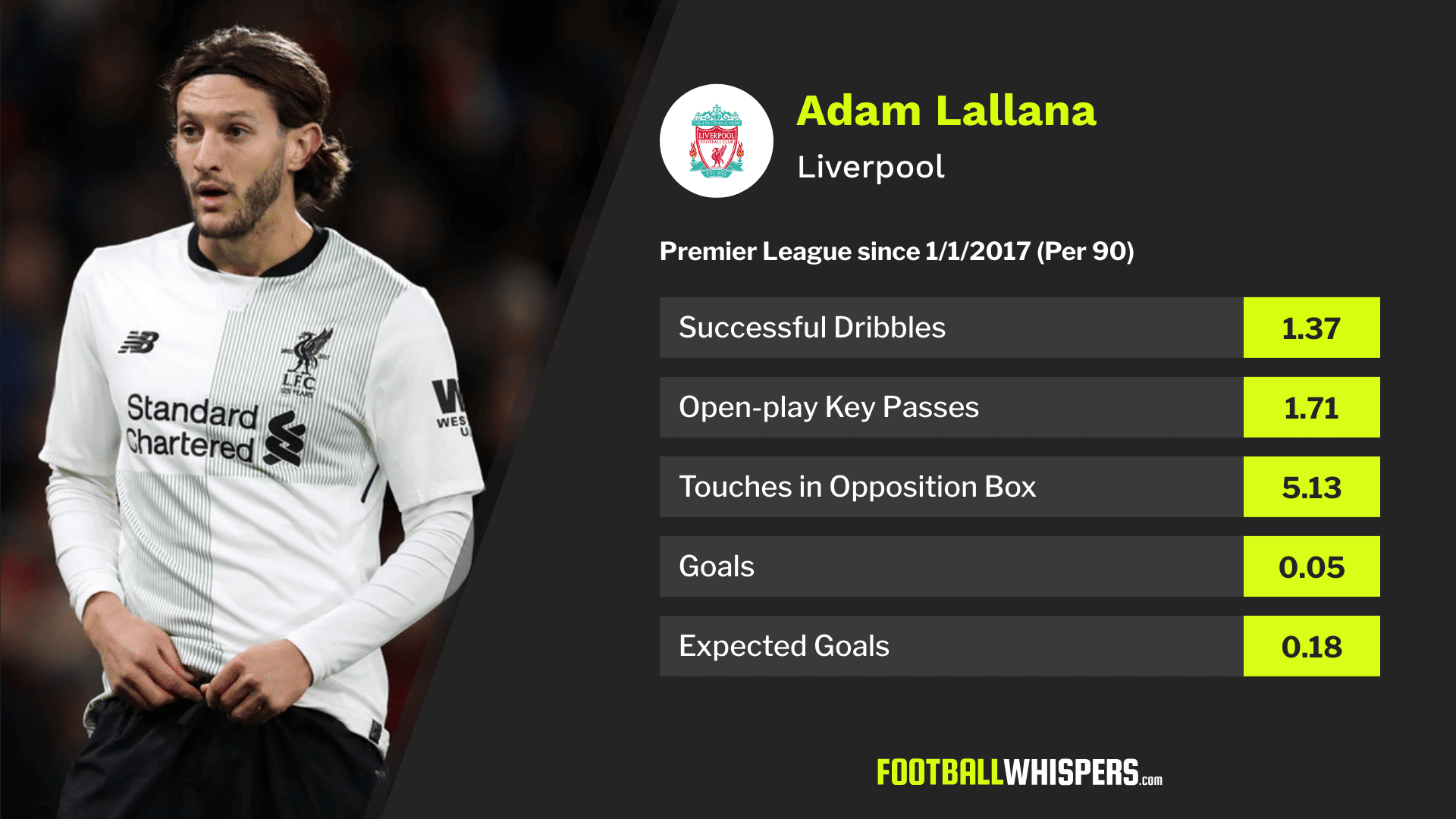 For example, Celta Vigo's Brais Méndez reportedly has a £23million release clause. Since January 1, 2017, the 22-year-old has an expected goals per 90 average of 0.22.

That isn't to suggest he should be a transfer target but that it would be possible to replace what Lallana has averaged during that period without breaking the bank, meaning that argument to keep him is somewhat nullified.

The Reds have coped without him for the best part of two years. Recouping some of the money they paid for him, as well as freeing up the £110,000-per-week wage he takes home could go a long way to helping Liverpool improve their squad this summer.

It may appear to be ruthless, and out of character for the Merseyside club, but sometimes this sort of business needs to be done to progress as a club.