Predictable isn't usually a word associated with Jürgen Klopp's Liverpool. But at times last season the Reds were exactly that.

The opposition went into games against the Merseysiders knowing the German tactician was going to use a 4-3-3 system. They knew Mohamed Salah was going to score. It was predictable to the masses that the speed of Sadio Mané and the genius of Roberto Firmino was going to cause havoc. Dread it. Run from it. Destiny still arrives.

The Reds plundered 84 goals in the Premier League and ran riot in Europe, regularly racking up emphatic victories. Teams knew what was coming but couldn't do anything to stop it.

For the most part this season, Liverpool had been predictable again. This time around, however, it was for all of the wrong reasons.

The front three weren't clicking like they were last season. The goals hadn't dried up entirely but the well was by no means as full as it was last term.

Narrow wins over Brighton and Huddersfield Town wasn't what many had expected back in August. These were the games the Reds flexed their attacking muscles in during the 2017/18 campaign.

The xG (expected goals) average remained at a decent total, especially when the level of the opposition faced was taken into account. Once in a rut, it's difficult to get out of it, and Liverpool's form was tinkering on the brink of becoming the norm.

So against Red Star, Klopp mixed things up. The German tactician went with the unpredictable Xherdan Shaqiri on the right of a not so familiar 4-2-3-1 system, with Salah leading the line. The players reacted. The 4-0 scoreline could've, and probably should've, been closer to double digits. 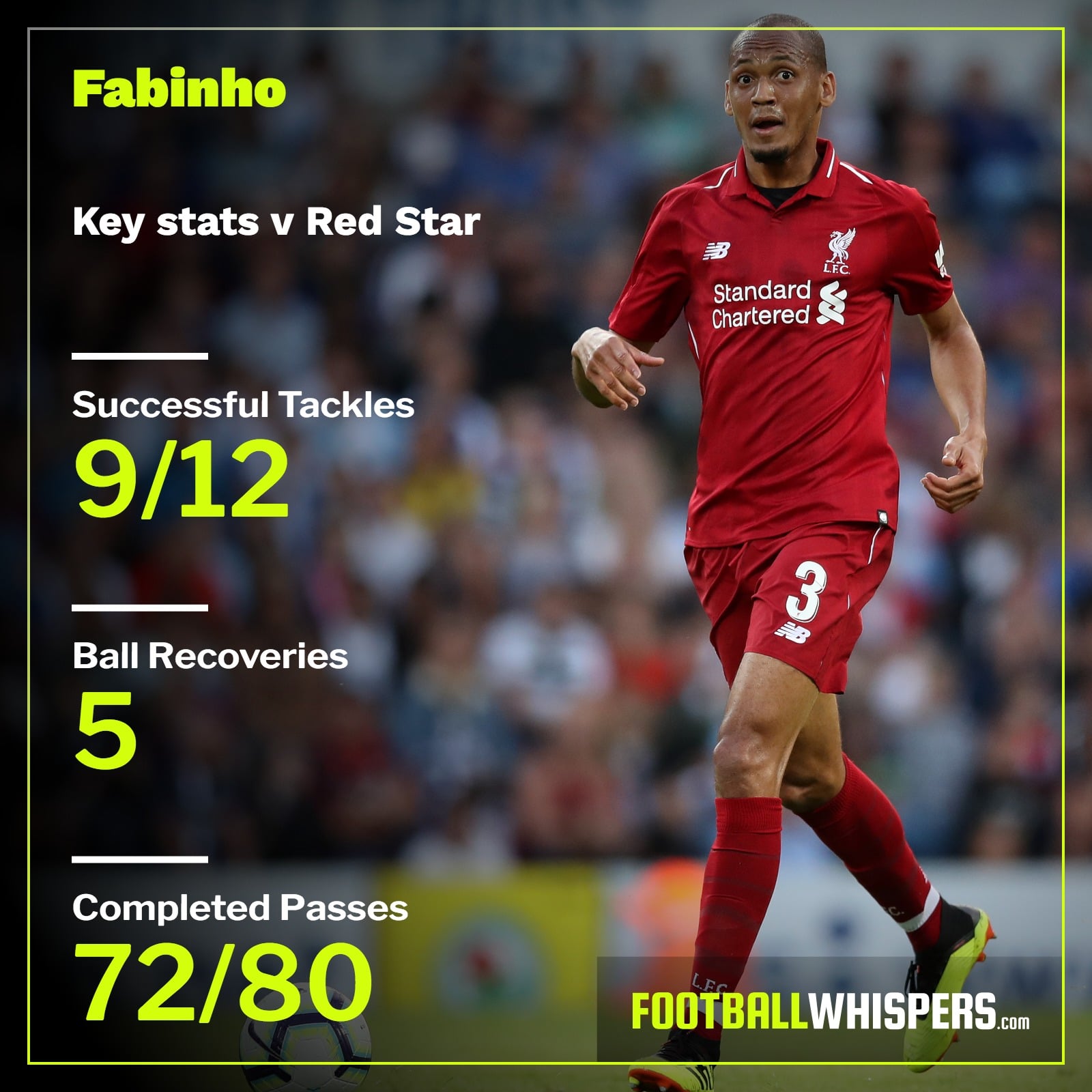 Fabinho, making his full debut for his new club following on from his £40million move in the summer, was at his rampaging best in the heart of the midfield.

Gini Wijnaldum, who lined up beside the Brazilian in a midfield two, was integral to this system working. The Dutchman has been the most consistent performer this season for the Reds despite playing different roles in a variety of tweaked systems.

Against the Serbian champions, he formed a solid base with the former Monaco man. Klopp admitted that, as a birthday present to the Liverpool No.3, he used Fabinho's favoured system – a double pivot in midfield.

But it wasn't just the 25-year-old who flourished in the new shape. After a ten-minute bedding in process, the entire starting XI looked at home in a system Klopp was married to during his time with Borussia Dortmund. 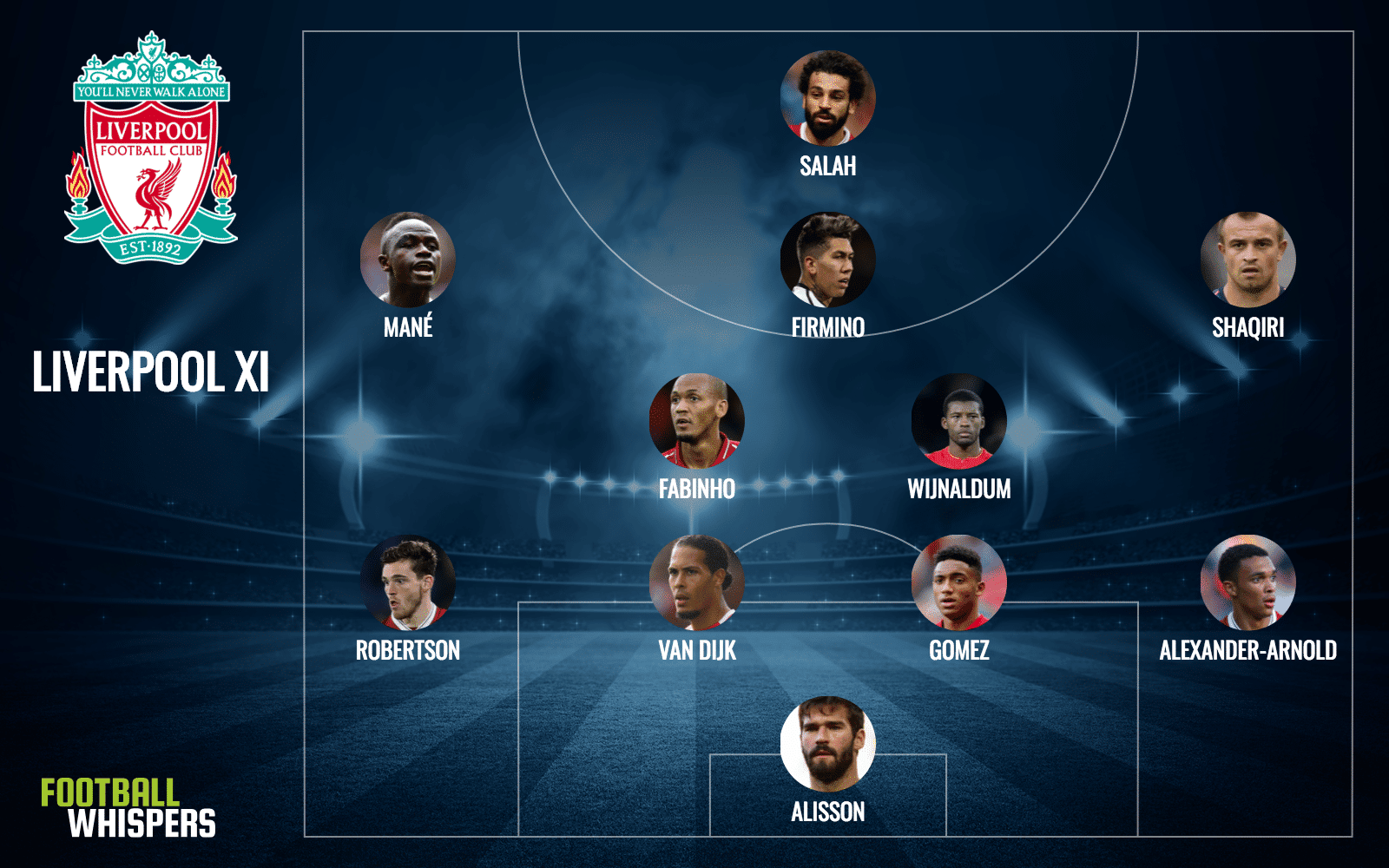 On paper, this isn't too dissimilar to the 4-3-3 shape the Reds have used for the majority of Klopp's time with the club. More often than not, the right-sided midfielder would push wide to allow the right-winger to drift centrally.

James Milner did that job during Klopp's debut season with the club and has done similar since returning to life as a midfielder. Adam Lallana played that during the 2016/17 campaign which then allowed Mané to cut inside and get into the area. And Alex Oxlade-Chamberlain made that his position after a number of dominating performances last term.

Shaqiri played the role against Southampton and Huddersfield and ahead of the match at Anfield on Wednesday evening, many expected the Switzerland international to do so again. However, it quickly became apparent that this wasn't the case.

While it isn't a drastic change to the system, Klopp's decision to position certain players in different positions was a clear sign that this wasn't the same old Liverpool.

Firmino has been transformed from a false 9 into a genuine world-class No.9 under Klopp. But was deployed as an attacking midfielder, a position he owned while at Hoffenheim.

Salah was tasked with leading the line, something he's done previously during matches due to the Reds having an interchangeable front three, until he was replaced by Daniel Sturridge. Shaqiri and Mané supported from the wider areas. 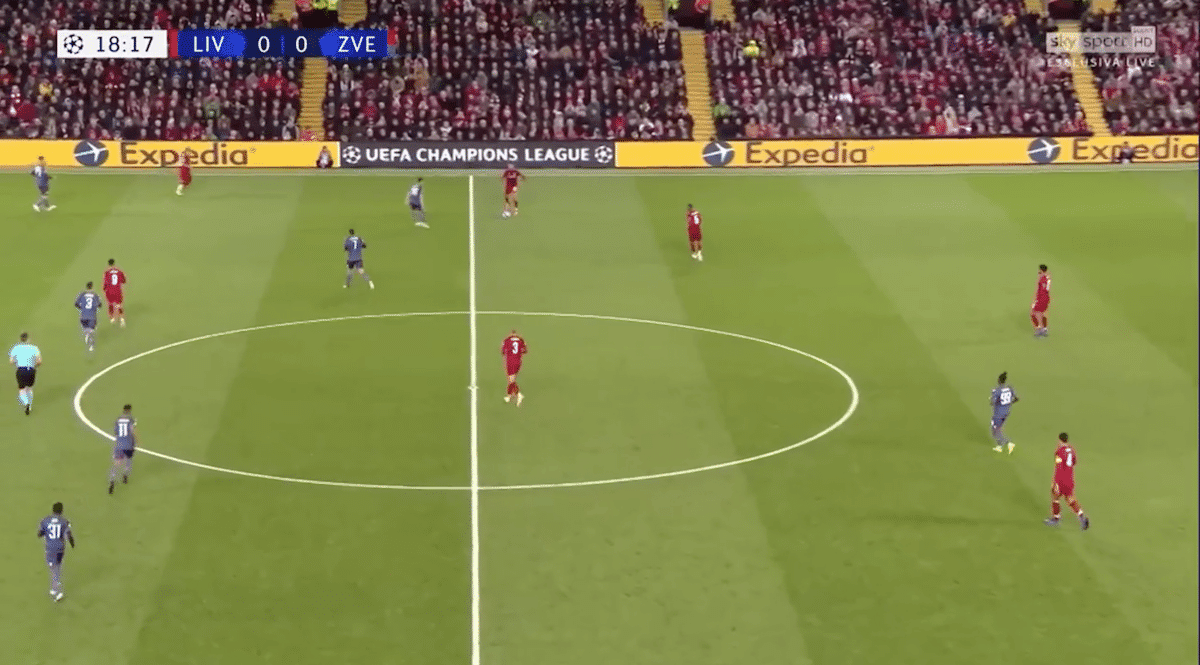 There was a visible difference in Liverpool's build-up. The switch to a double pivot meant the Reds were more flexible when playing out from the back.

Usually, when Liverpool deploy a single No.6 they drop between the centre-backs to make it a three and this allows both of the full-backs to push on. Against Red Star, Wijnaldum and Fabinho would take it in turns to drop if Liverpool needed to recycle the ball.

A subtle tweak but it added to the cohesion on the night. With both the centre-midfielders comfortable in the defensive line, it allowed Joe Gomez and Virgil van Dijk, more so the former, the opportunity to step out with the ball and carry it forward.

Again, it isn't anything remarkable on Klopp's part but it added to the unpredictability of the evening. All because of the system. 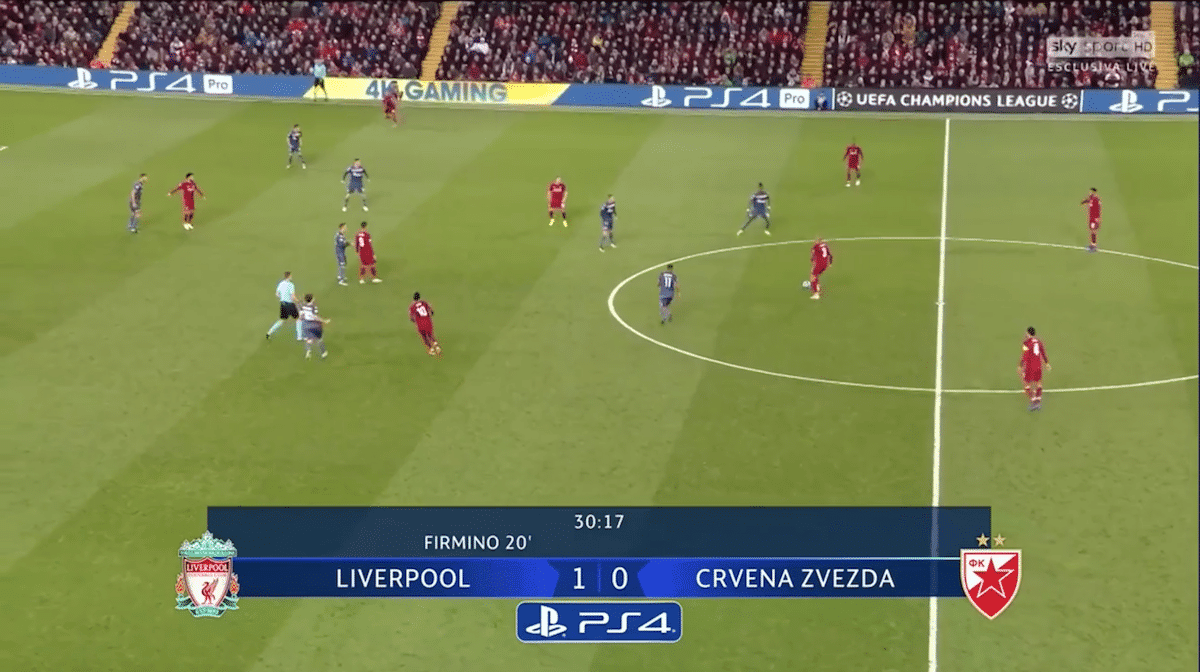 The shape allowed Liverpool to effectively play 2-4-4 whenever they had possession.

Mané and Shaqiri would come narrow and almost make a box midfield with Fabinho and Wijnaldum in behind. Robertson and Trent Alexander-Arnold would stay high and wide to stretch the defence and always be an outlet. Firmino would drop deeper to be the link between the midfield and Salah.

The Reds have done similar in the past but not with such attacking players in the starting XI. It meant the dynamic was different. There was nobody simply doing a job in a role they weren't entirely up to speed or comfortable with. 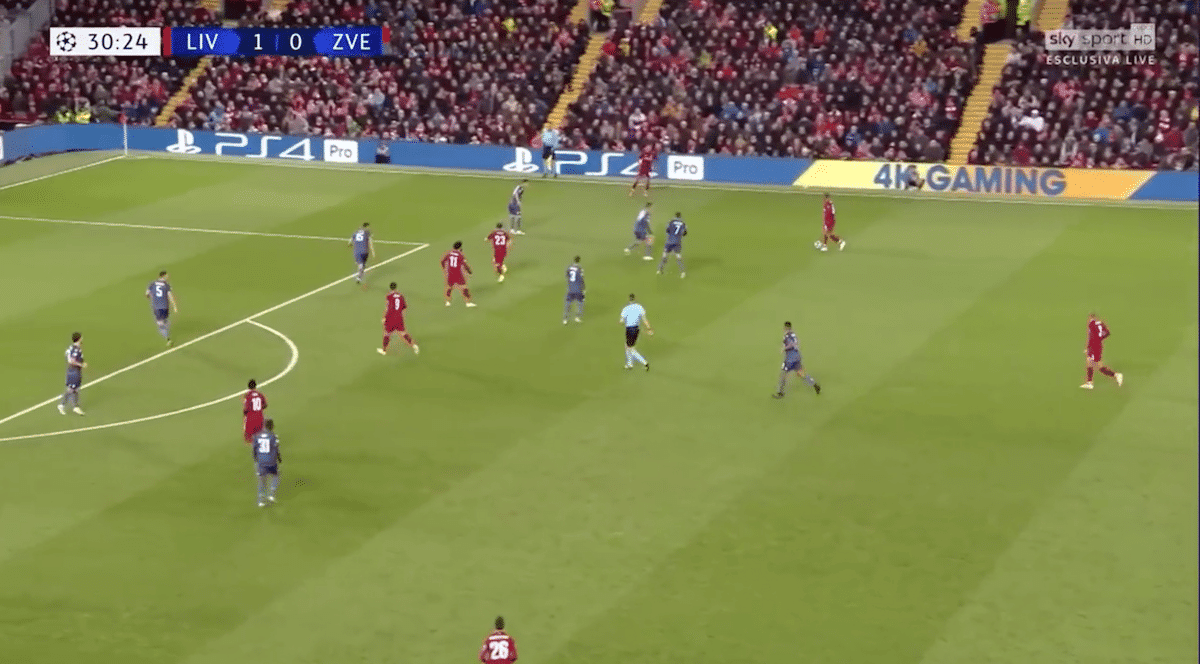 The result. Well, that is clear for all to see in the above screenshot.  Liverpool had a balance to the side they've lacked recently yet all the while managing to get four players, all of whom are capable of the sublime and the extraordinary, into central areas.

Salah, Mané, Firmino and Shaqiri are all within 20-yards of each other and within 25-yards of the opposition's goal.

The Reds' opener came about because the attackers are all so close to one another. The latter three all crowd Red Star when there's a turnover of possession and the Liverpool No.23 is able to regain the ball. He eventually exchanges passes with Firmino before working it to Robertson on the left.

The Scotland captain has Salah, Mané and Firmino to aim for with his cross and picks out the Brazilian who fires home.

The second goal isn't too dissimilar. Shaqiri pokes a pass to Salah who makes no mistake on his weaker right foot. In each instance, as the ball hits the back of the net, Liverpool's front four are all within 20-yards of each other.

The 4-2-3-1 shape worked for all of the players Klopp selected, not just Fabinho, and gave them an unpredictability they've been lacking. The opposition wasn't the greatest but there's enough evidence there to suggest it's something the Reds can use to devastating effect once again this season.