Liverpool handed Manchester City their first defeat of the season, holding on to win 4-3 at Anfield in what was a barn-storming fixture between two of the Premier League's best attacking clubs.

Alex Oxlade-Chamberlain struck first, firing low past Ederson, but just before the end of the half, Leroy Sané smashed a shot beyond Loris Karius at his near post.

City started the second half the better of the two, but the game was turned on it's head when Roberto Firmino brushed John Stones off the ball and applied a delicious chipped finish to hand the home side the lead.

Three minutes later Sadio Mané smashed in the Reds' third and the game looked over when Mohamed Salah lobbed Ederson from long-range after the keeper had fired his clearance straight at the Egyptian.

Late goals from Bernardo Silva and Ilkay Gündogan gave Pep Guardiola's side hope, but it was too little too late.

Here are five things we learned from Liverpool's 4-3 win over Manchester City.

“The most important thing as far as he [Klopp] is concerned is that we perform well as a group. He’s always telling us we can only win as a group, not as individuals. It makes it easier if every player performs but, if you do it well as a group, you can reach more.”

The words of Georginio Wijandum when asked before the game about Philippe Coutinho’s move to Barcelona and the Dutchman did he very best to fulfil his manager's words on Sunday, putting in perhaps his best performance of the season.

No one made more passes than the 27-year-old’s 41, via WhoScored, finishing with a pass completion percentage of 80.5. He made three tackles, two interceptions and completed four dribbles, but overall it was his effort, movement, desire and energy which gave the Reds the drive in midfield they needed. 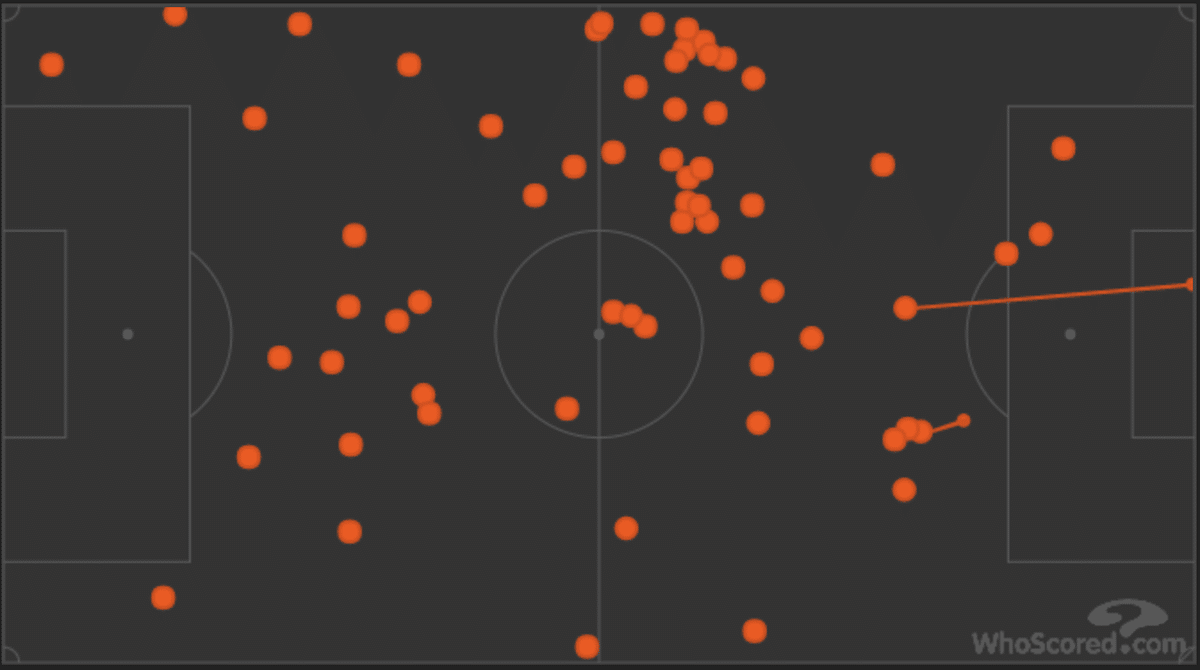 His touch map above shows he was everywhere, adding to both the defence and attack in equal measure. If he keeps up Sunday’s level, the £142million they picked up from Barcelona will become an even bigger bargain.

It was the Englishman’s goal which kicked off the fireworks at Anfield on Sunday. His brilliant run and low drive giving the Reds the lead.

It’s the 24-year-old’s third goal since arriving from Arsenal in the summer, and it means he now has as many goals in 20 Premier League appearances than in his last 71 for the Gunners.

He was another who enjoyed a tremendous afternoon in the Liverpool midfield, attempting two shots, three key passes and five successful dribbles going forward, but more importantly he added a tackle and two interceptions on the defensive side.

Oxlade-Chamberlain was only second to Wijnaldum in passes made and attempted a team high eight crosses.

Ahead of the game, Klopp would have been wary of the threat offered by Raheem Sterling on the right of City’s attack, especially up against Andrew Robertson.

However, when the former Liverpool winger was taken off with 20 minutes to go, it was the clearest indication the Scottish defender had won the battle of Anfield

Sterling failed to attempt a shot on target, he made just one key pass and didn’t complete a single dribble.

Per 90 minutes this season, Sterling has averaged 2.7 shots 1.9 successful dribbles and 1.6 key passes.

Robertson finished with seven tackles won and seven clearances. He wasn’t as active on the attacking front, failing to attempt a cross, but the effort he put in to limit City’s attack was superb and he is growing quickly into one of the better left-backs in England.

Klopp Showing How to Test City

It was the type of game everyone expected. Both sides favour attacking over solid defending and neither adjusted for the battle on Sunday.

However, Liverpool showed what you need to do to ask questions of the league leaders. The Reds pressed high, with the full-backs doing an excellent job to keeping the wide men quiet, but the centre-backs also did their job to perfection – for most of the game.

You can see from the graphic below, Dejan Lovren made six interceptions throughout the game, but they were mostly in a really high position. 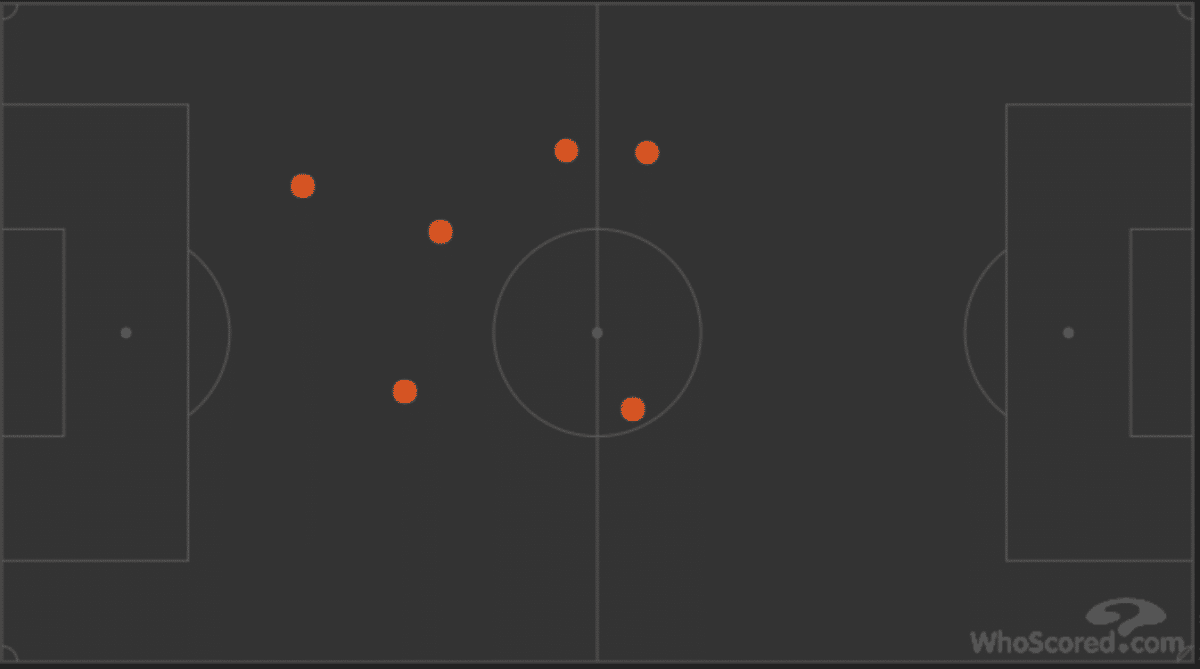 Liverpool’s energy and relentlessness to push and pressure the City team in possession is one of the biggest reasons they ended Pep Guardiola’s winning run. 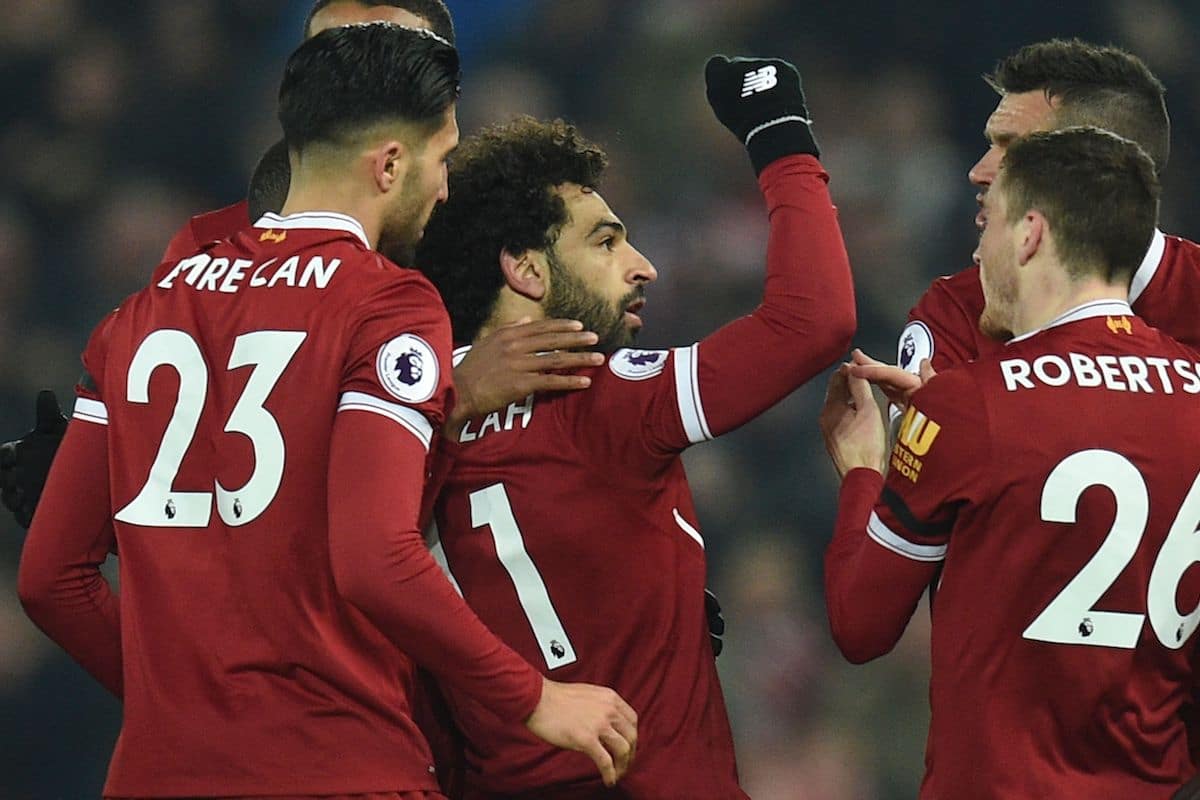 Despite leaving Liverpool with 12 goals and nine assists in 20 appearances, the presence of Philippe Coutinho wasn’t felt on Sunday.

The Brazilian, in four games against the other top six clubs, only managed an assist against Arsenal.

Playing against City is not the type of game Liverpool will miss the 25-year-old, in fact, they were much better without him.

Coutinho wouldn’t have been able to put in the work required in the midfield, especially compared to Wijnaldum and Oxlade-Chamberlain.

Up front, the Reds attack had so much balance with Mané on the left and Salah on the right. There was space for the three forwards to drop deep, pick up the ball and look to link up with their team-mates.

Liverpool fans felt disappointed to see Coutinho leave in January, putting doubts on their ability to finish in the top four, but after Sunday’s display, the Brazilians departure could be a blessing in disguise.