After reaching their first Champions League semi-final in a decade, Mohamed Salah’s 40th goal of the season helped Liverpool coast to a comfortable 3-0 win over Bournemouth.

They opened the scoring after just seven minutes in a game where they were rarely troubled by the visitors. Asmir Begović spilled Sadio Mané’s header, allowing the Senegalese forward to poke in the rebound.

Salah got his landmark goal in the 69th minute, a long, lofted ball from Trent Alexander-Arnold deftly nodded over Begović, stranded in no-man’s land.

Roberto Firmino’s 25th of the season was the icing on the cake – a strike through the legs of Simon Francis late on.

It was Liverpool’s 300th  goal under Jürgen Klopp in just 148 games, and moves his side a point behind Manchester United in third, although their rivals have two games in hand.

But what did we learn from the game at Anfield?

The Egyptian became only the eighth player to score 30 Premier League goals in a season with his 40th in all competitions. 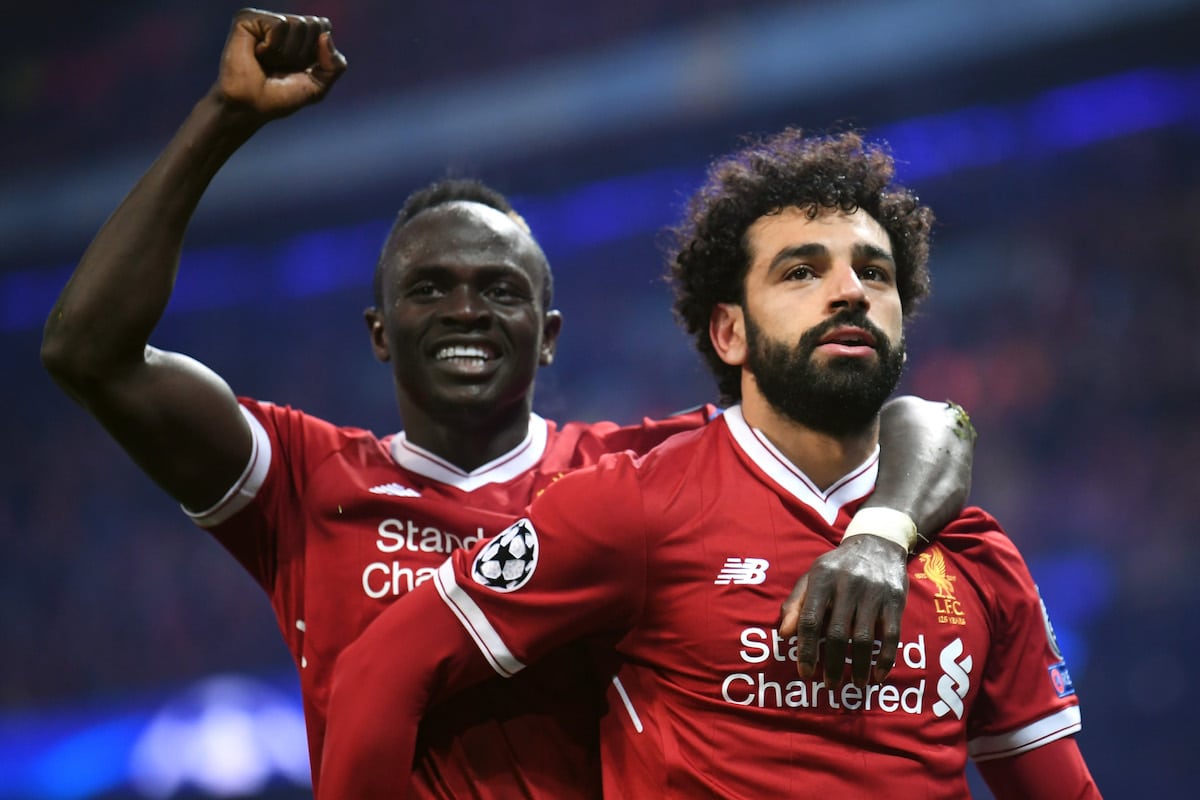 Salah is now just seven goals off equalling Ian Rush’s record of 47 goals in a single Liverpool season, and in the form he’s in he looks like he could get it.

He has six games, possibly seven if Klopp’s side reach the Champions League final. The race is on.

Klopp knows how to manage games

Bournemouth couldn't cope with Liverpool's counter-press in the first half.

You can see from the image below how many defensive actions and ball recoveries Liverpool made in Bournemouth’s half (the right-hand side of the pitch). 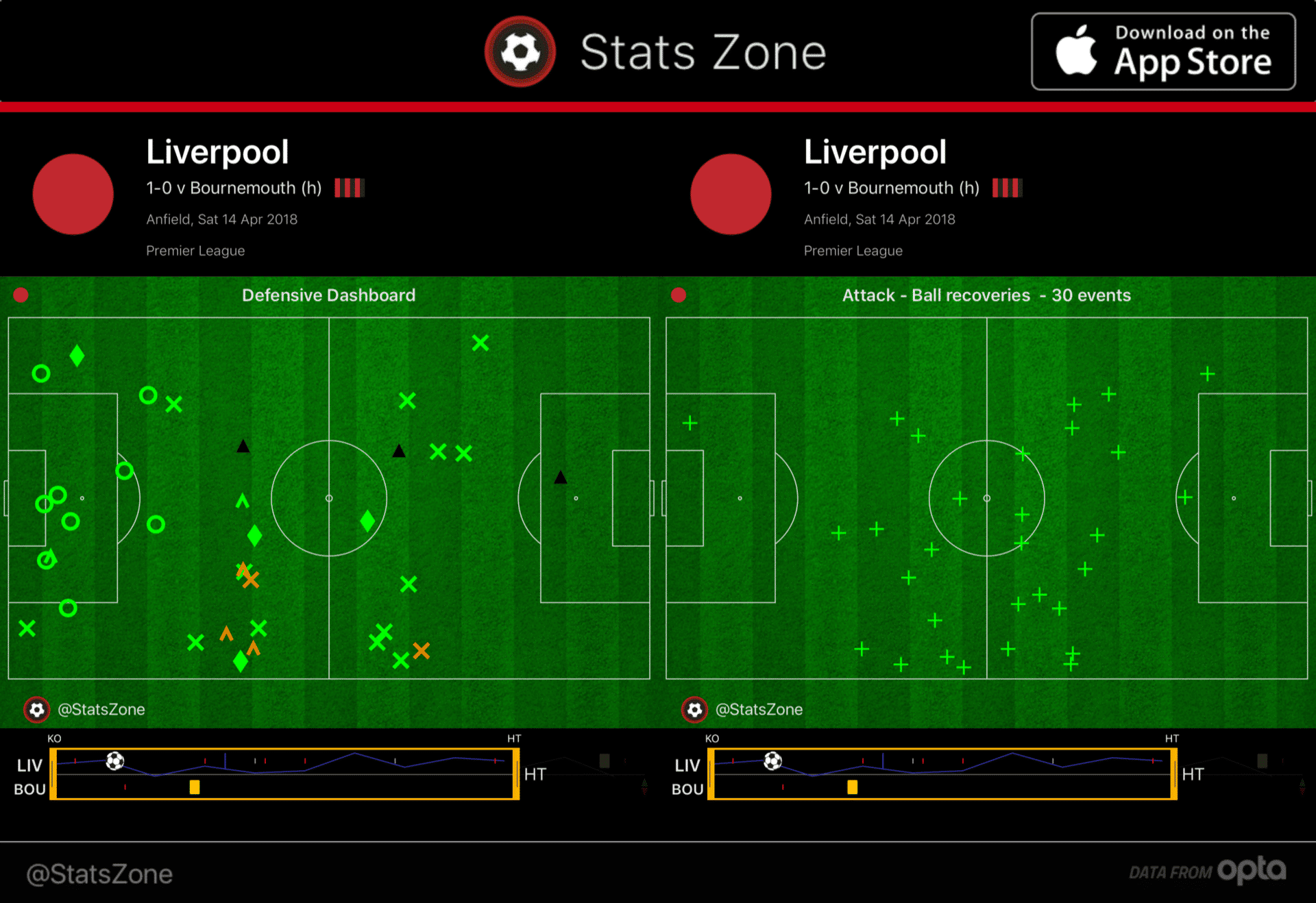 Their intensity didn’t seem the same after half-time (below), but it didn’t need to be. 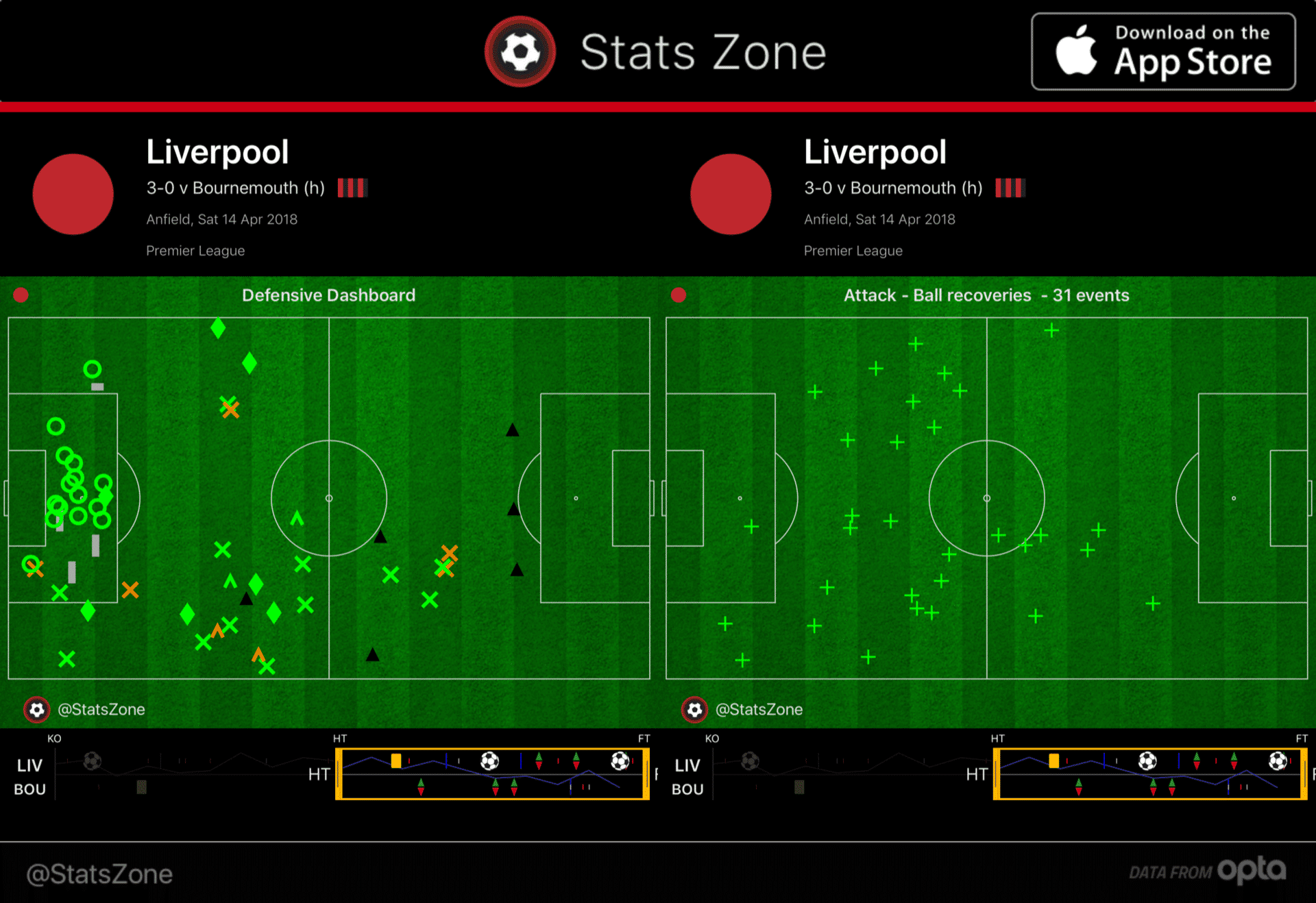 They managed the game masterfully, biding their time and conserving energy at the start of the second half until the gaps opened up. When they did, they struck on the counter and could have scored a lot more than they did.

Bournemouth’s defence had a lot of shakey moments, and Liverpool were a big threat down Aké’s side.

He did a good job of mopping up, a combination of the amount of play Liverpool put down that side, but also of the young Dutchman’s reading of the game and speed off the mark.

However, he was caught out slightly on 67 minutes with a ball in behind, and his hand on the back was enough to send Salah over.

Was it enough for a penalty? “Some will say yes, some will say no,” said Graham Poll in BT Sport's ref's booth – and that seems a fair assessment.

It’s been a criticism levelled at Eddie Howe in the past that he doesn’t know how to coach a defence.

Bournemouth generally kept quite compact between midfield and defence when the team was settled.

However, once they settled into a deep block, they rarely pressured Liverpool’s midfielders on the ball at all, allowing Jordan Henderson time to pick out Mané in the lead-up to their first goal.

Bournemouth were also only solid when they were settled. Individual actions or mistakes too often let the side’s structure down and allowed Liverpool chances.

…And perhaps that defensive system wasn’t the right choice today

A 3-4-3 is useful for absorbing pressure on the break, the three centre-backs usually holding up the opposition attack when they reach your box.

However, the system is also prone to letting these quick attacks through the cracks in the middle of the field. If there’s one team you don’t want to encourage to counter, it’s Liverpool.

The system is also dependent on the centre-backs being strong individually in open play – and when you’re playing as high a line as Bournemouth were they need to be quick too.

The theory might have been good, but in practice maybe this wasn’t the best time to use this formation.