England might have been champions of the world, but 50 years ago it was a club from Scotland that changed the landscape of European football forever.

On the 25 May 1967 in Portugal’s capital a group of men lifted the most coveted prize in club football as Celtic defeated Inter Milan to win the European Cup; something of an unthinkable achievement now but even more so back then due to the fact that nearly all of the 11 players used that night grew up within a bus ride of Parkhead.

Celtic were the first British team to win the European Cup, but rather than buy success their legendary manager, Jock Stein, achieved glory with a team of local lads who would forever be known as the ‘Lisbon Lions’.

Clubs from Italy and Spain had dominated the relatively new competition, which had only launched 11 years earlier, meaning that this was not just the first British team to lift the outsized trophy but the first Northern European side too – making it something of a key juncture in the competition’s history for the decades to come.

To say the 1966/67 season was a successful one for Glasgow Celtic would be something of an understatement seeing as they won every competition they entered: the Scottish League, the Scottish Cup, the Scottish League Cup, the Glasgow Cup, and the European Cup. They set a world record total of 196 goals scored in the process thanks to a style of play encouraged by boss Stein.

Hailed as one of the true greats of the game, Stein had only taken over in 1965 following short stints in charge of Dunfermline and Hibernian during the early part of the decade but, with the Celtic board seeking to elevate the club out of mid-table mediocrity, they decided to take something of an unprecedented gamble by hiring their former player.

Stein was a Protestant and many felt it was inconceivable that he could take charge of a team from the Catholic side of Glasgow, but Stein proved that even the most bitter of religious divides could be breached as he led Celtic to complete domination of Scottish football for the next decade.

He inherited a side that was full of local lads who he had worked with in the youth side who, before his arrival, were out of favour before his arrival. In total 14 of the 15 men involved in that campaign came from within a 10-mile radius of Celtic Park and only Bobby Lennox, who Stein signed from Hearts, came from Saltcoats, some 30 miles away. 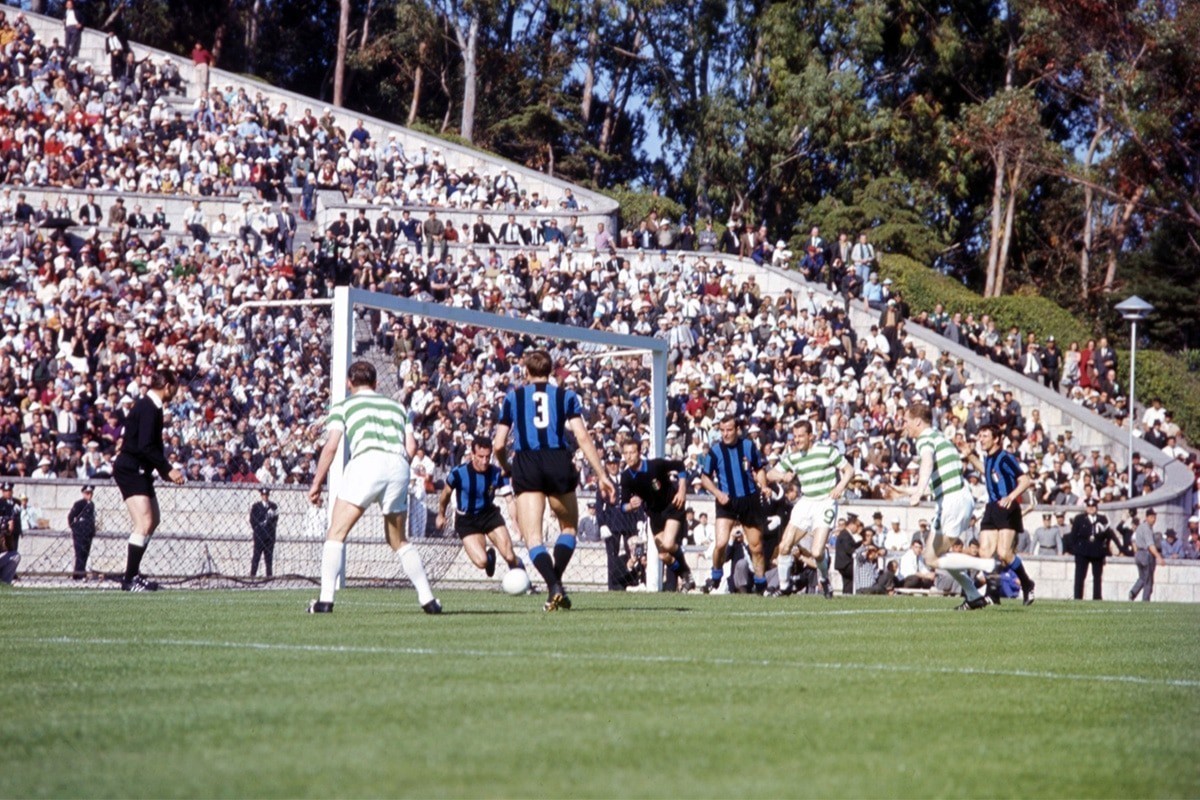 Stein’s love of attacking football had drawn comparisons with the Dutch national side – how current Scottish boss Gordon Strachan would love to draw those comparisons – and a combination of tough tackling and direct play meant they tended to overwhelm their opponents before they even knew what had hit them – something which provided instant results in his early days at the club.

For the first two decades after the war Celtic had only claimed one Scottish First Division title; but by winning the championship in 1965 it had given them the opportunity to play in the European Champions Cup – the first time the ‘Hoops’ had entered what was now being looked upon as the Holy Grail of club competitions.

Domestically, a 1–0 win on 29 October 1966 over Rangers secured the Scottish League Cup and their first trophy that season before the Glasgow Cup followed the following week when they defeated Partick Thistle.

Celtic's progression in the Scottish Cup was relatively straightforward too, setting up a final with Aberdeen; two Willie Wallace goals easing the Glasgow side to a 2–0 win. Predictably, winning the league and completing a domestic clean sweep would involve something of a battle with their most bitter of rivals from across town, however.

Despite only losing twice all campaign and with two games remaining, Rangers were still in contention for the title with Celtic's penultimate league fixture being away to the men from Ibrox. A draw was all that Celtic required to clinch the title and a brace from Jimmy Johnstone earned Celtic a 2–2 draw and the championship trophy to boot.

But even after such overwhelming success at home it was to be Celtic’s achievements in Europe which is still celebrated to this day as they looked to secure an unprecedented haul of trophies and forever cement their name in – not just Scottish or British folklore – but the annals of the European game too.

So it was that on 28 September 1966 that a crowd of over 47,000 would fill Celtic Park to watch the Bhoys kick off their European adventure in the first leg of the first round of the European Cup against FC Zürich.

A 2-0 victory with goals from Tommy Gemmell and Joe McBride would provide the ideal start while they would put another three past their Swiss opponents in the second leg without conceding – a resounding victory over two legs which was to be the start of a cherished European journey. 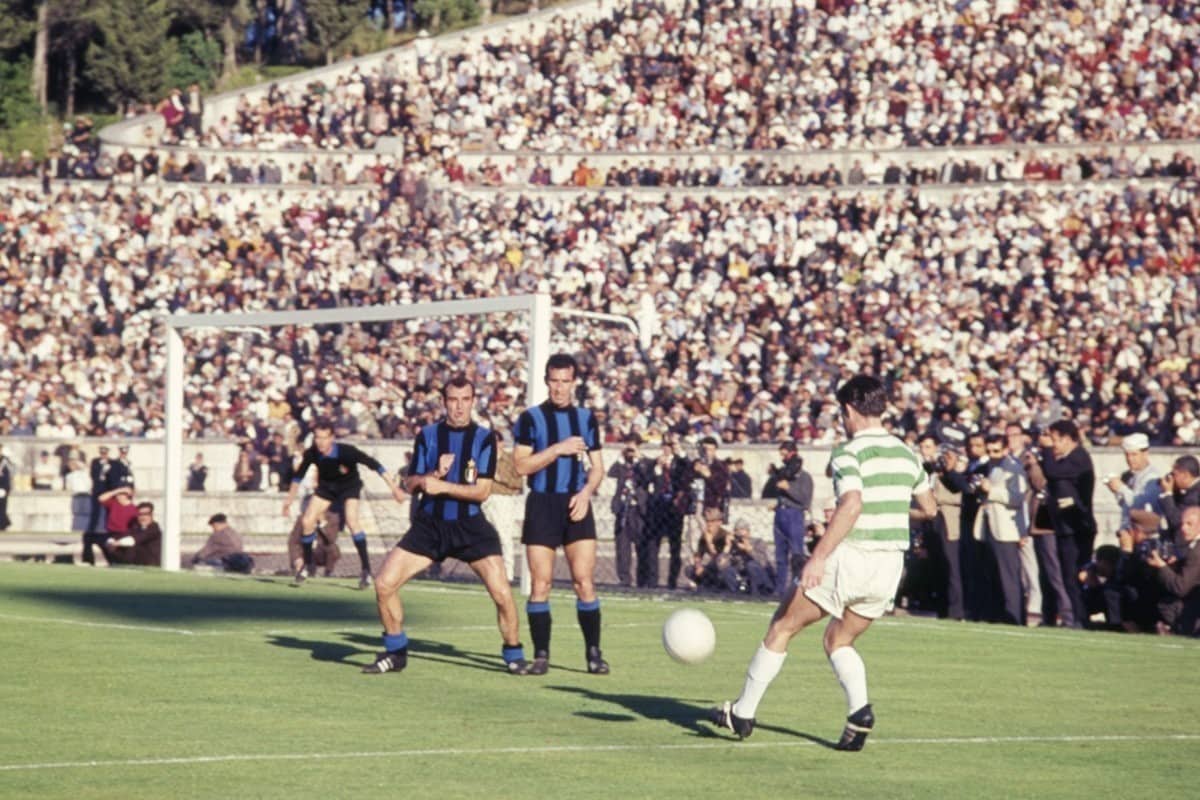 In the second round Celtic demolished the French club Nantes 6-2 on aggregate before eventually getting past the Dutch side FK Vojvodina in the quarter-final after overturning a 1-0 first leg defeat with a 2-0 win at home in front of an ecstatic Parkhead crowd thanks to a last minute Billy McNeil goal.

Celtic would play Czechoslovakian side, Dukla Prague in the semi-final with the first leg taking place in Glasgow. Celtic won 3-1 courtesy of goals from Jimmy Johnstone and Willie Wallace. For the second leg manager Jock Stein set-out his stall to be ultra-defensive and for once forsake their philosophy of attacking football – the plan worked perfectly as Celtic secured a 0-0 draw which put them in the final.

In that final they would face formidable opposition in the form of Internazionale of Milan, a side who had been crowned champions of Europe three times in the past four years and had pioneered a style of play at Inter called catenaccio (or ‘door-bolt’) under their Argentine manager Helenio Herrera. The matchup would ultimately provide one of football’s classic ideological battles as Celtic’s all-out-attack philosophy came up against their more pragmatic Italian opponents.

The game in Lisbon was almost as famous for the stories of the fans as the game itself, with a mass-exodus seeing thousands of fans make their way from Scotland to Portugal by any means possible for a game that nobody wanted to miss.

Inter were renowned for their ability to protect a 1-0 lead, meaning their opponents were terrified of falling behind to them, but after 7 minutes that is just what happened when the Italians won a penalty after Jim Craig caught Renato Cappellini in the box and Sandro Mazzola tucked it away.

To their credit Celtic raised the tempo and went all out. Having already conceded, they had nothing to lose and took the game to Inter thanks to a sustained level of attacking and creative football.

As expected Inter retreated into their shell as Celtic swarmed forward, pushing their full-backs Tommy Gemmell and Billy McNeil so high up the pitch that the Italians were pegged back in their own half for much of the remainder of the game. Celtic would have 39 shots on goal while their goalkeeper Ronnie Simpson would only make two more stops all game.

Milan held onto their early lead until half-time. But in the 63rd minute, Tommy Gemmell cut back on the edge of the area and unleashed a powerful shot that flew into the net. The goal gave Celtic the inspiration the players needed. They continued to attack their opponent’s goal.

With Inter unable to snap-out of their defensive mode and Celtic continuing to push forward looking to seize upon their initiative, in the 84th minute Chalmers tapped home Billy McNeil’s goal bound shot from close range. The unthinkable had happened and the Nerazzurri had conceded two goals from being in a winning position.

At the final whistle Celtic fans poured onto the pitch to celebrate their team's victory; digging up turf, taking shirts, boots and anything they could as a memento of the most famous night in the club’s history – such was the chaos that captain Billy McNeill had to leave the stadium and enter through a service entrance to get to the press box and lift the huge trophy while the rest of the team received their medals in the dressing room. 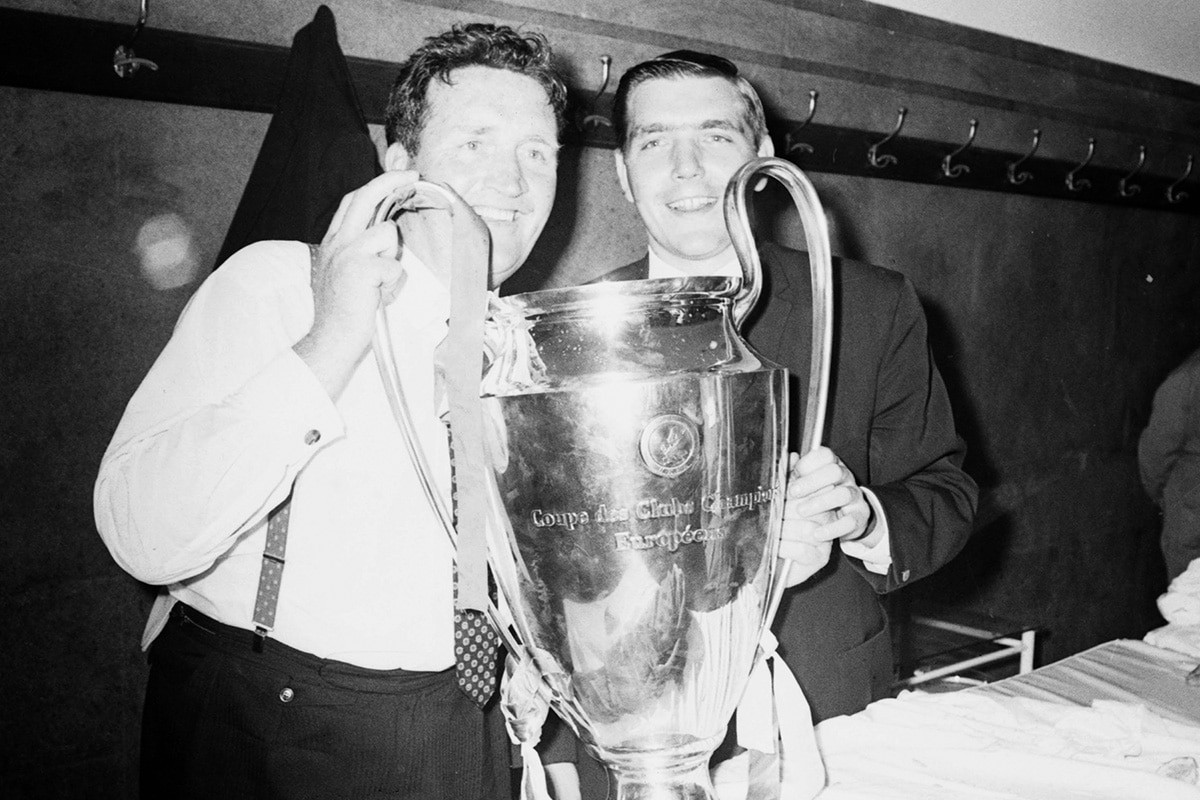 “There is not a prouder man on God's Earth than me at this moment,” proclaimed Jock Stein after the game. “Winning was important, but it was the way that we won that has filled me with satisfaction. We did it by playing football; pure, beautiful, inventive football. There was not a negative thought in our heads.”

As the 20,000 or so Celtic fans that were there that night made their way home (some never did and stayed in Portugal) they had little idea that their team was about to embark on one of the most glorious periods in the club’s great history.

In Stein’s 13 years at Celtic Park, they would win no fewer than 10 League titles, eight Scottish Cups, six Scottish League Cups and would go on to reach the final of the European Cup again in 1970 – ultimately losing to Feyenoord.

But that 1967 victory has paved the way for future generations of British success stories on the Continent, such as Sir Alex Ferguson's 1983 Cup Winners' Cup triumph with Aberdeen.

That May night in Lisbon will forever be Stein’s legacy as a team of local lads, most of whom grew up in the shadow of Parkhead and were known on a personal level by the community, defeated one of the greatest sides in Europe.

Even Inter Milan manager Helenio Herrera would describe the Bhoys victory as: ‘a victory for sport’, and who could disagree?