For 92 minutes, it had been a Clásico with almost everything – almost. It had beautiful goals, contentious goals, questionable defending and, well, disgraceful defending.

It had a Gareth Bale injury and a Sergio Ramos red card, while it had late drama delivered via the boot of a prodigiously talented South American. Unfortunately, though, this was not to be James Rodríguez’s night.

Instead, it was Lionel Messi, Barça’s immortal genius who produced one of football’s great moments, whipping an expertly-judged left-footed drive inside Keylor Navas’ post for his 500th Barcelona goal, the Clásico winner and, most importantly, a well-timed lifeline for his team’s faltering LaLiga title bid.

The goal, completing another memorable tussle between Spain’s heavyweights, shifts the momentum in Barça’s favour, leaving their bitterest of foes stunned, silenced, but not surprised.

For Messi has done this to Real so often in the past, just not the immediate past, having failed to score in his last six Clásicos.

Zinédine Zidane would have been forgiven pre-match to expect a Messi operating below optimum efficiency after a morale-sapping Champions League elimination at the hands of Juventus.

There, Messi and co endured a difficult night, capped by the Argentine himself taking a nasty tumble and face-planting the pitch.

Barca’s pain was automatically intensified with the knowledge that Real had progressed, thanks in no small part to Cristiano Ronaldo, who reached a century of Champions League goals during a wonderful hat-trick which ensured countless column inches would be dedicated to his brilliance.

Yes, it had been a draining week for Messi.

However, appearing in the shadowy Santiago Bernabéu tunnel at the beginning of the night, Messi looked frighteningly focused with a glacier sense of calm.

Staring straight out at the pitch, the Barca captain couldn’t wait to get onto the stage to rectify the failures of midweek.

The stakes are always high in a Clásico but, for Barca, defeat would spell a certain end to their LaLiga supremacy by leaving them six points behind Real having played a game more – a perceptibly insurmountable deficit at this stage.

The vintage opener that we’ve seen time and time again

However, with the Champions League beyond reach this season, Messi was determined to take centre stage in the title race and write another wildly entertaining chapter into the history of his career.

And while the winner will be rightfully remembered for years to come, his first on the night was vintage stuff.

Collecting the ball in midfield, Messi poked it forward to Sergio Busquets.

Continuing his run, he received it back from Ivan Rakitic just outside the penalty area, exploding onto it, surging past Luka Modric, evading Dani Carvajal’s lazily swung leg and driving his shot unerringly into Navas’ corner.

We’ve seen it so often before, the run, the swivel, the studious finish. Yet we can never grow tired of watching it unfold.

Of course by that stage Messi’s nose had been bloodied by Marcelo, whose flailing elbow caught the Barcelona man straight in the face.

There was a moment, when Messi lay on the pitch with blood streaming from him, in which he decided that enough was enough.

He had been flattened in Turin, bruised at the Bernabéu, but this 29-year-old was not prepared to be beaten. Not this time.

Marcelo is a wonderful left-back and a Clásico veteran: he should have known better than to infuriate Messi.

The result was a fury and focus which powered Messi into overdrive.

Real were robust with him, as usual, with such a method descending into an undomesticated farce in the case of Ramos when he lunged wildly at Messi with two feet to earn himself a red card.

They fouled him a total of six times but he kept getting back to his feet. Having been struck by Marcelo, Messi decided to hit back but let his fleeting feet do the damage.

The difference between Messi and Ramos is simple: when Ramos is angered he lunges into tackles, when Messi is angered he unlocks another level with which to stupefy his opponent.

Having scored the equaliser to restore parity – overtaking the great Alberto Di Stefano as the Clásico’s leading marksman in the process – Messi had given his team the platform from which they could build and inflict pain on Real.

But there was, of course, still much more to come.

Messi was even the inadvertent creator of Rakitic’s stunning strike, as his poor touch allowed Madrid to half-clear to the Croatian, who pulled back onto his left foot and unleashed an unstoppable missile that soared into the top-corner.

1-2 with 73 minutes gone – it was looking good for Lucho in his last stand. But Real wouldn’t abide by Barça’s script, not that easily.

With five minutes remaining, Marcelo crossed for Rodríguez who lifted the ball high into the net to make it 2-2, a result that would maintain Real’s psychological edge. 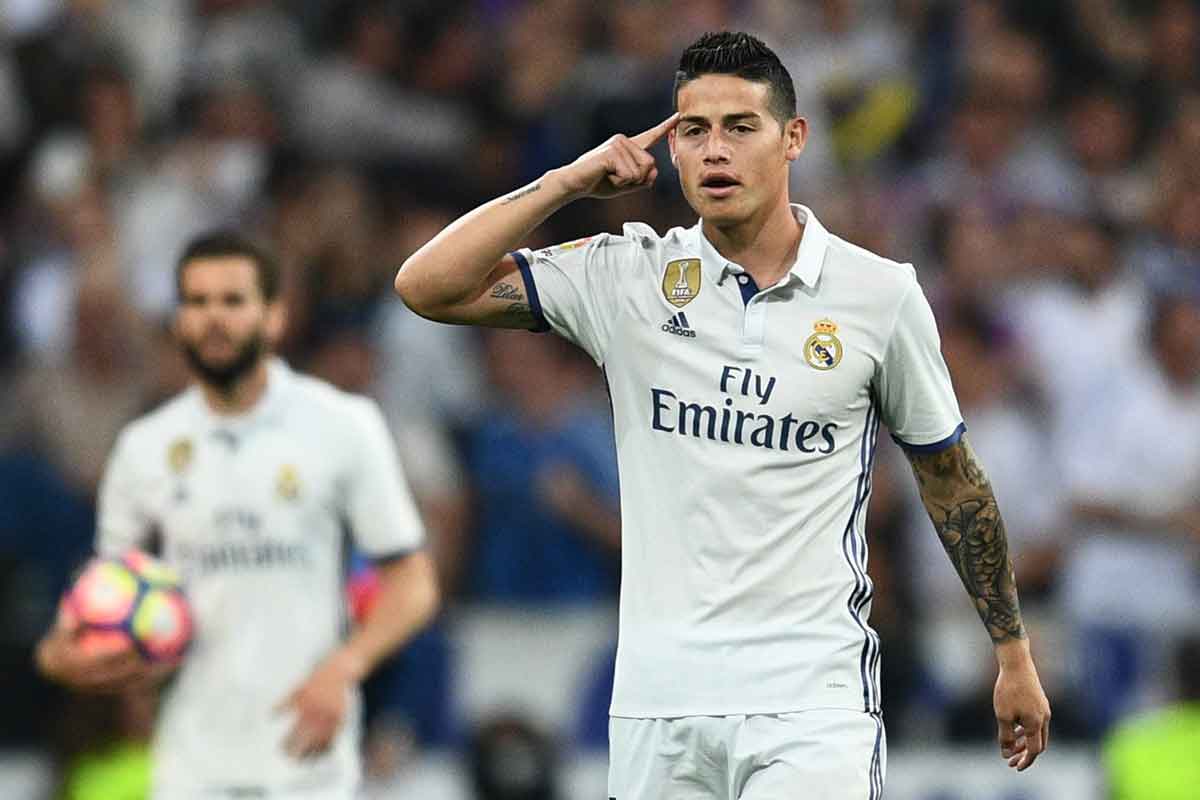 READ MORE: Does James Rodríguez have a future at Real Madrid?

No, having been further angered by Ramos’s scything hack and his own side’s inability to hold out for a win, Messi decided to intervene decisively in the game’s dying embers.

As the clock ticked towards the end of two minutes added on, Messi met Jordi Alba’s cut-back and delivered a devastating blow that swung the pendulum back in Barcelona’s favour.

He celebrated by taking the shirt from his back and hoisting it aloft, pointing to the sky while he fixed his gaze on the crowd.

There he stood: the battle-scarred genius who once again proved to be Catalonia's own imperishable superhero.

Credit must go to his supporting cast, too, without whom victory would have been impossible.

Sergi Roberto gets a special mention after his lung-busting run from right-back that powered Barca into a promising position.

As he caught his breath, Busquets slid a pass to Alba on the left and the defender had the presence of mind to pull his pass back to meet Messi’s run.

Then, with one swish of his left boot, this Clásico’s story had its ending and the title race was revived.

Exceeding expectations and surpassing the hype

Reactions on social media have likened the goal to being Messi’s Bruce Banner moment (the fuming rage) and even his own Maximus moment standing in triumph after a deadly gladiatorial bout (are you not entertained?)

I prefer to think of it as purely another Messi moment, another time in which this blessed footballer has provided a moment to savour, a moment where time stood still as he once again transcended his own ridiculously high standards.

It was also a goal that sent out a stern reminder: doubt me at your peril.

Messi is the last athlete on the planet that needs to prove himself, but he decides to do it anyway – and picked an opportune time to produce this season’s greatest moment.

Messi’s numbers on the night make for impressive reading.

He completed seven out of 11 take-ons and 34 out of 45 passes in total, with several completed key passes in the final third.

Operating behind Luis Suárez and Paco Alcácer, Messi often found pockets of space and utilised them well, either finding a cutting pass or taking the opportunity to drive purposefully at Real’s defence.

Messi also won 15 of 23 duels and was fouled six times – more than any other player.

His fortunes contrasted starkly to Ronaldo, whose night started with a clear penalty appeal waved away, included a huge chance missed from close-range and ended with him pounding the turf in frustration at the sight of Messi wheeling away in celebration.

Messi and Ronaldo’s rivalry has often been as entertaining as the football they play, and Messi knew he had to upstage his counterpart in a week that saw Real’s superstar become the first player to reach a century of Champions League goals.

Ronaldo stands alone there but Messi arguably went one better by joining an elite selection of players to have scored 500 goals for one club.

But with all the landmarks, big numbers and acclamations, one stat resonates deeper than any other.

This season Barcelona have scored more goals in the 90th minute or later with nine. Messi has six of them.

Under Enrique, Barcelona have adopted a never-say-die attitude – demonstrated memorably in that 6-1 defeat of Paris Saint-Germain – and Messi encapsulates such commendable spirit and dogged determination more than any.

He now has 125 career goals between 76 and 90 minutes, a clear indication of his capability to find an extra gear just as fatigue sets in for everyone else.

It’s a precious gift to have and proof of Messi’s incorruptible mentality.

He feels the kicks, the bumps, the falls, the swinging elbows and, most of all, the defeats. He is human. It hurts him.

Like any footballer, defeat eats at Messi’s soul and torments him. The difference, though, which separates him from most, is how he responds time and time again.

That’s why so many people call him the greatest of all time and why it’s difficult to argue with those people.