José Mourinho may not know his first-choice starting XI at Manchester United, but few would query Jesse Lingard's inclusion.

Lingard, who has been with the club since he was seven, has not always been assured of a place at Old Trafford.

Much to his chagrin, David Moyes sent him on loan to Birmingham City for the first half of the 2013/14 season just when it looked as though he was on the cusp of breaking into the first-team.

Having impressed at St. Andrew's, he returned to Old Trafford only for Moyes to sanction another loan, this time to Brighton.

By the time Lingard headed back to Manchester, Moyes was history and, following an eye-catching pre-season, it looked as though the attacking midfielder was set to be given a crack at the first-team by Louis van Gaal.

Injury 24 minutes into the Dutchman's first game in charge, however, again curtailed Lingard's progress. A final loan spell – at Derby County – soon followed but since then the England international has kept improving and is now one of the club's most consistent and productive attackers.

His qualities were once again evident during United's 2-0 win at Burnley on Sunday, as the Red Devils got their campaign back on track following dismal defeats to Brighton and Tottenham Hotspur.

Lingard didn't take up much headline space in Monday morning's papers. No, Romelu Lukaku's double, the embarrassing anti-Woodward banner that sailed over the ground prior to kick-off, and Marcus Rashford's moment of madness made sure of that.

But Lingard shone on the right of United's attack, particularly during the early stages, as Mourinho's men put a toothless Burnley to the sword.

The 25-year-old demonstrated the intelligence and fluidity he offers the United front-line. United's rock-solid foundation in midfield of Nemanja Matić and Marouane Fellaini – who was also excellent – freed Paul Pogba to link up with the more advanced trident of Lingard, Lukaku and Alexis Sánchez.

Pogba's passing range is exceptional but he is only as good as the runner ahead of him. Luckily, Lingard is skilled at running off the defender's shoulder and finding pockets of space between the lines, constantly offering an option when United are moving forward.

Just two minutes into the game at Turf Moor, Lingard's movement created a goalscoring chance. As Lukaku latches onto Victor Lindelöf's measured ball over the top, Lingard makes his move. 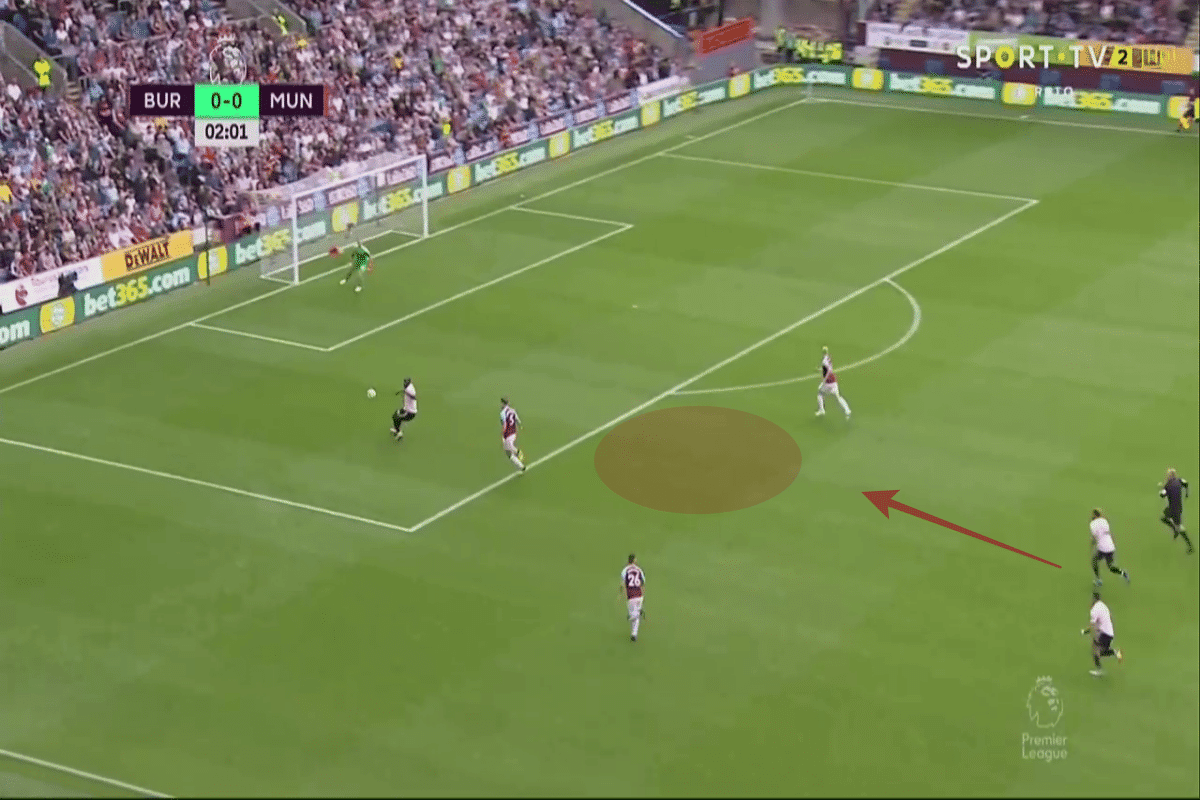 Spotting the space between the two Burnley defenders, Lingard makes himself available. 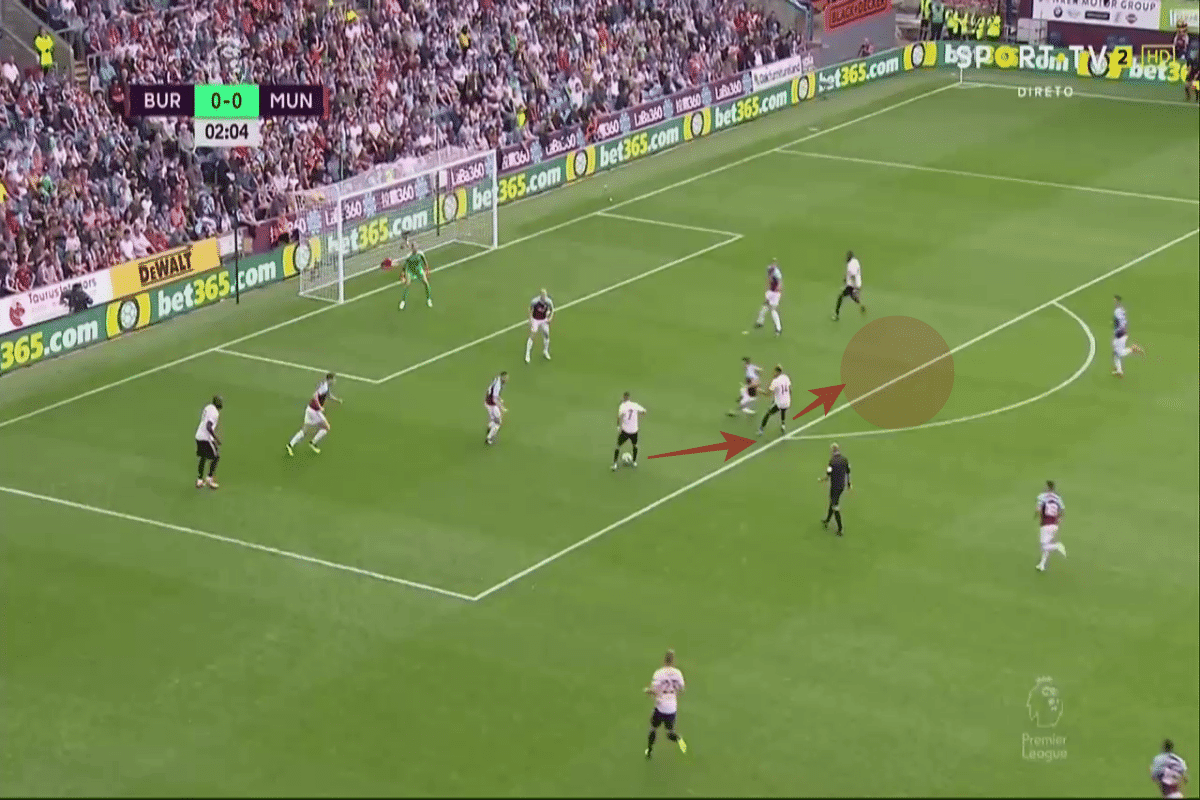 However, after Sánchez makes a similar run, he peels off to a more central position and waits for the pass from the Chilean. 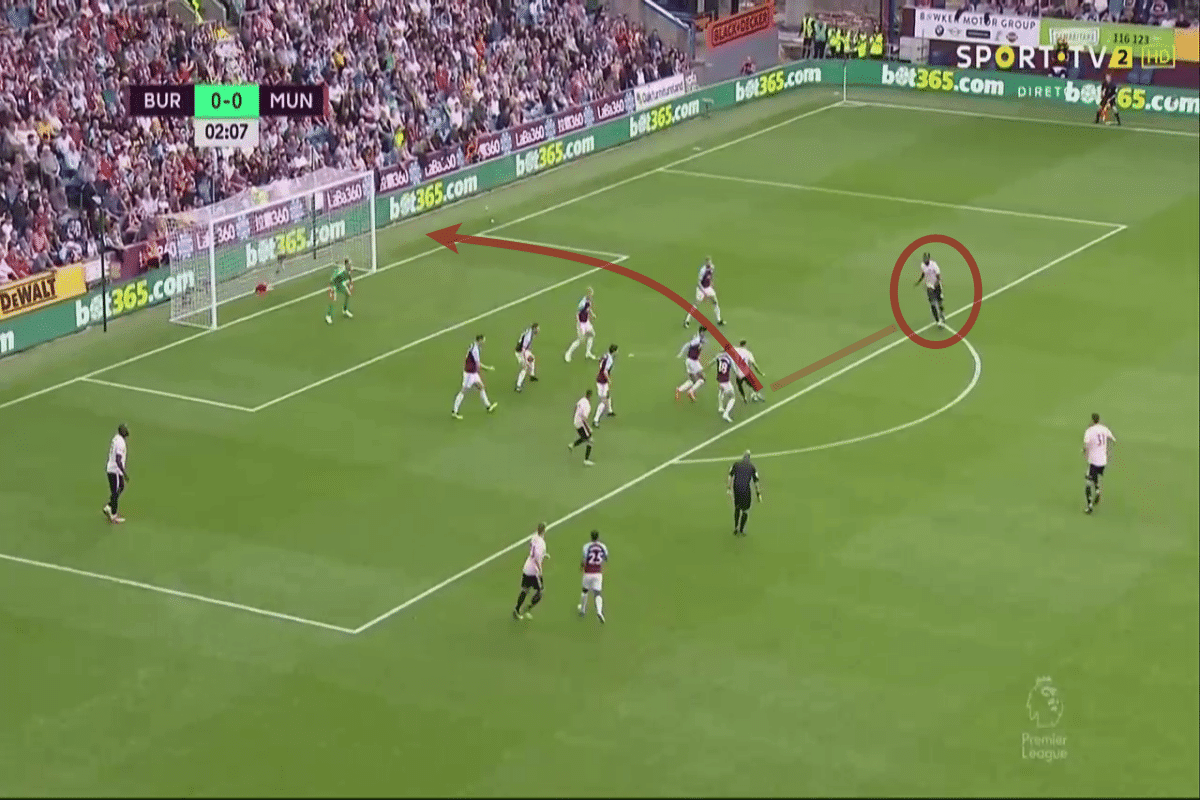 Before getting the ball at his feet, Lingard has made up his mind. Recognising the lack of space in front of him and to his left (there are, remarkably, seven Burnley players within close proximity), his sharp first touch allows him to shift to the right and shoot.

Unfortunately, he curls his effort wide and, with Pogba in space on the edge, you can perhaps question his decision-making while admiring the confidence to take the shot on. It did, however, set the tone for another eye-catching display.

Admittedly, Lingard's finishing was poor. In the tenth minute, Sánchez found him in a pocket of space again, only for Lingard to spray another right-footed curler wide of Joe Hart's left post.

But one of Lingard's many endearing characteristics is his steadfast refusal of allowing misses to play on his mind, as proven during the build-up to United's second goal.

Of course, the origin of the goal was Luke Shaw's brilliant driving run through the Burnley midfield but the ball would not have fallen to Lukaku had it not been for Lingard's craft.

Having received the ball on the edge of the area, Lingard's quick thinking and quick feet created the opportunity to shoot once more, this time his deflected shot finding its way to Lukaku for the Belgian to grab his second.

Lingard is not perfect. His finishing still needs refinement but his constant movement and endless enthusiasm typify the more enjoyable elements of this United team. When Lingard has the bit between his teeth, he seems to bring out the best in his teammates and Rashford could certainly do worse than to look at his teammate's application and attitude following his indiscretion at Burnley.

Rashford failing to step away from Phil Bardsley's provocations was disappointing, especially given the forward had made a discernible impact – which included winning the penalty – after replacing Sánchez on the hour-mark.

It was telling, too, that as tempers boiled over, Lingard was the first United player to try and defuse the situation by taking his teammate away and offering a few choice words in his ear.

Rashford is five years Lingard's junior and will learn with experience but the 20-year-old has a long way to go before he earns the trust Mourinho clearly has in his compatriot.

Lingard is not United's creative heartbeat. He does not boast Rashford's searing pace, Lukaku's clinical finishing (not based on his erratic performance on Sunday) or Pogba's exceptional passing range.

He does, however, possess a great footballing brain, one which allows him to constantly pick up dangerous positions, link up with his teammates and make things happen for a side that can often look slow, turgid and bereft of ideas in the final third.

Right now, Lingard is above Rashford and Anthony Martial in the pecking order. It's not hard to see why.