It's as good as a done deal according to reports in Portugal: Benfica defender Victor Lindelöf will be Manchester United's first signing of the season, officially rubber-stamping a £35million move to Old Trafford after the current international break.

The 22-year-old centre-back was strongly linked with a move to Old Trafford during the January transfer window, but José Mourinho elected to keep his powered dry, focussing instead on outgoings rather than reinforcements at that stage.

But it certainly seems as though the Red Devils are keen to improve upon their current central defensive options this summer, with the likes of Michael Keane, Marquinhos and Raphaël Varane all named as potential targets, while Chris Smalling and Phil Jones face uncertain futures at the club. 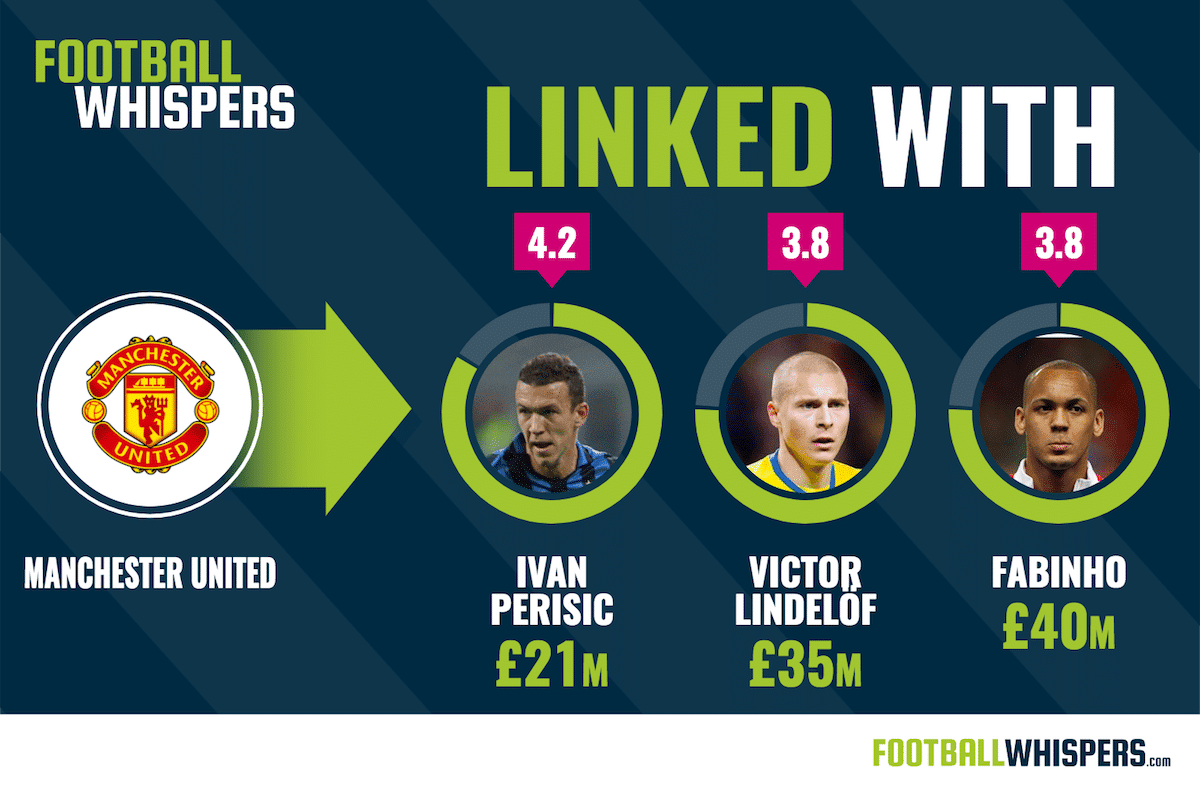 Ivory Coast centre-back Eric Bailly, a shock £30million signing from Villarreal a year ago, has impressed in his first season in the Premier Leader, showcasing unparalleled athleticism and ever-improving defensive instincts.

It is clear, however, that Bailly would benefit from a higher calibre of partner than Mourinho currently has at this disposal. But is Lindelöf the right man to fulfil that role?

Lindelöf A Good Match For Bailly

Bailly's blood and thunder style of defending has been a huge crowd-pleaser inside Old Trafford, with the former Espanyol stopper's uncompromising tackling and timely recovery busts always met with a hearty round of applause.

But a centre-back like Bailly is often able to produce the best results when partnered with a calming presence, someone who reads the game well, is able to drop off and sweep up while the more aggressive of the pair advances to challenge oncoming attackers; it helps, too, if the player in question is comfortable and controlled in possession.

The legendary partnership formed by Nemanja Vidić and Rio Ferdinand is the perfect example of this. The Serbian international was physically imposing, dominant in the air and never backed out of a challenge; the Englishman was skilled at reading the game, sweeping up behind his partner and bringing the ball out to initiate attacking moves with crisp forward passes.

The Ferdinand role is something that Jones and especially Smalling are not overly adept at, lacking the requisite anticipation to see how a progressing move is going to play out, with their positional skills often letting them down. Neither truly possess the quality on the ball to confidently stride into midfield and link play either.

This is also why Michael Keane is a somewhat curious target for United. The former Red Devils youngster was excellent for Burnley last term but he was operating in a similar role to Bailly, acting as the aggressor and stepping forward to challenge opposing attackers, while Ben Mee would often be the one dropping deep to cover. Nor does the 24-year-old have the passing ability to play out from the back.

Of United's current options, Daley Blind has many of the qualities required, but his lack of size, athleticism and pace make him far from ideal.

In Lindelöf, Mourinho appears to have identified just the man for the job. At 6ft 2ins, he is a presence in both penalty areas. With a 59.87 per cent aerial duels success rate, the Swede falls slightly behind Smalling and Jones — 68.57 per cent and 67.21 per cent respectively — but that is still a more than respectable average.

When it comes to anticipation and reading the game, Lindelöf's ability to nip opposition attacks in the bud is evidenced by his average of 1.7 interceptions per 90 minutes in Liga NOS last season, while Jones and Smalling averaged 1.6 and one respectively.

Tackles won can be a misleading stat to judge central defenders by, as sound positioning and anticipation will often negate the need to make a tackle at all.

Indeed, the great Paolo Maldini insisted that if he ever needed to make a tackle he had already made a mistake. With that in mind, it is encouraging that Lindelöf only made 0.6 tackles per 90 in 2016/17, to Jones' 1.9 and Smalling's 0.9. The Swede was also only dribbled past 0.2 times per 90 — that's just once every five games on average — a figure neither United defender could top.

However, when called upon to make a tackle, Lindelöf is clean and efficient, timing his challenges well and generally excelling in one-on-one situations. 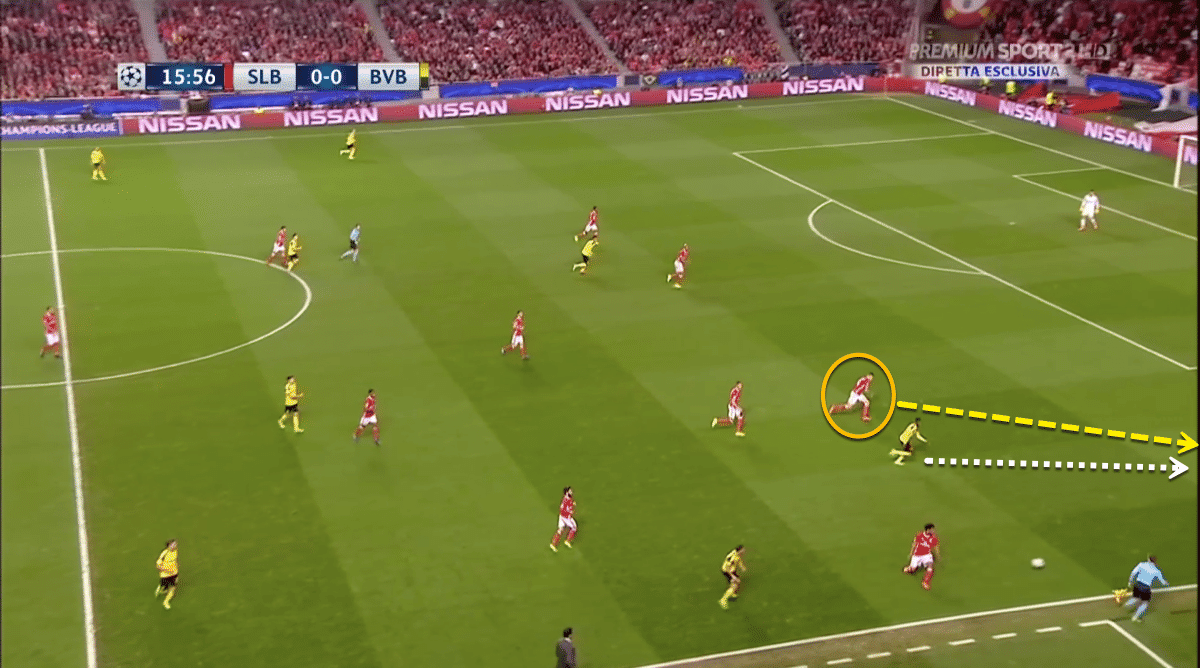 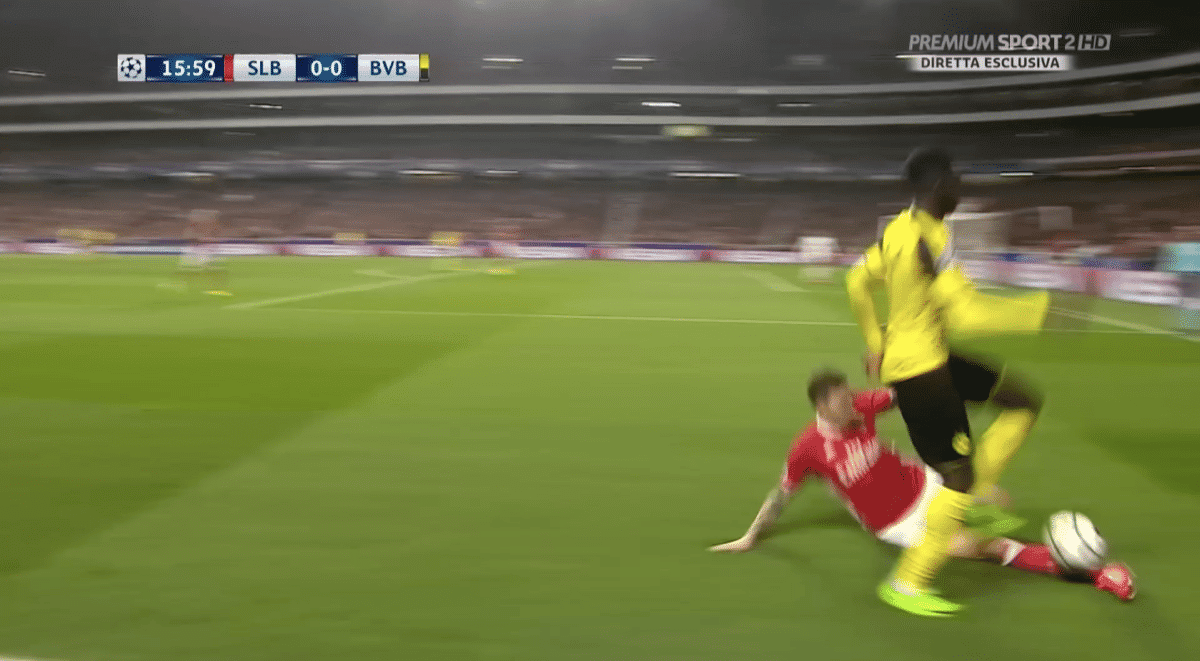 The above images, taken from a Champions League game between Benfica and Borussia Dortmund, show Lindelöf engaged in a sprint for a loose ball with Ousmane Demblélé, one of the fastest players in the Bundesliga.

The Benfica man kept up with the flying Frenchman before perfectly timing a sliding tackle, snuffing out what would have been a potentially dangerous situation.

Where Lindelöf really comes into his own is with the ball at his feet. Of all United players with five or more appearances, only Juan Mata (89.7 per cent) maintained a higher pass completion rate than the Swede's 89.9 per cent in league action last term.

Lindelöf's average of 62.2 passes per 90 minutes is a the kind of figure you'd expect to see from a midfielder, and one that none of United‘s defenders come anywhere near matching — Marcos Rojo is closest with 51.5 passes per 90.

This shows that the 11-cap Sweden international is confident enough on the ball to not only accept possession when it his given to him, but to actively seek it and look to instigate attacks from deep. 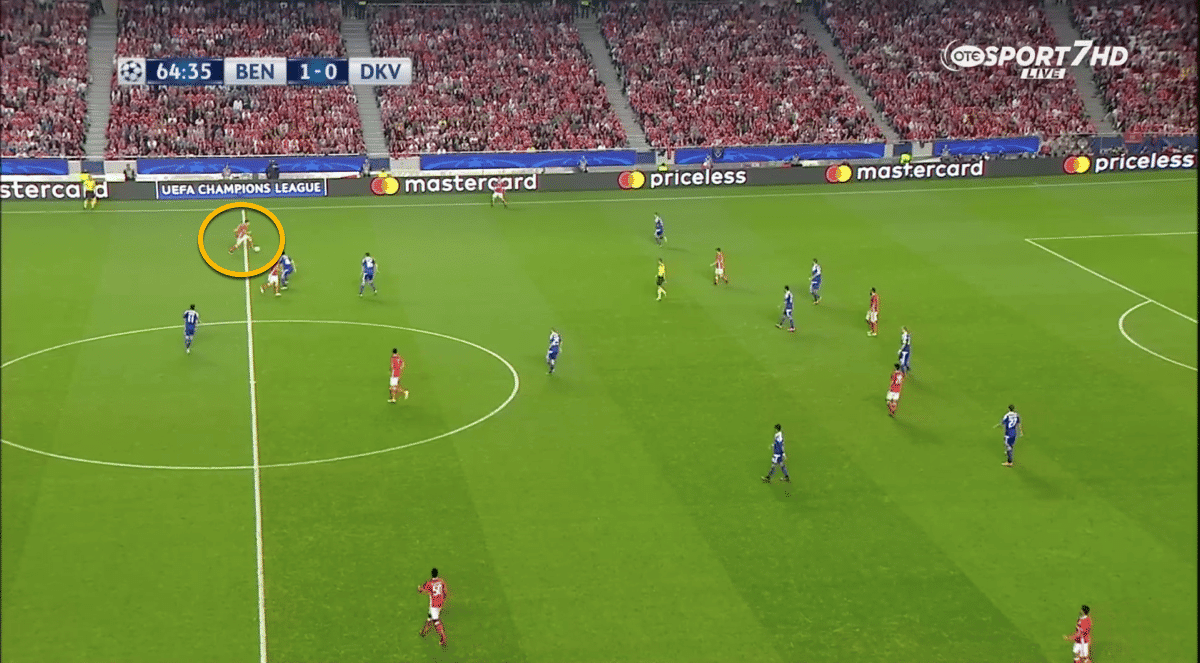 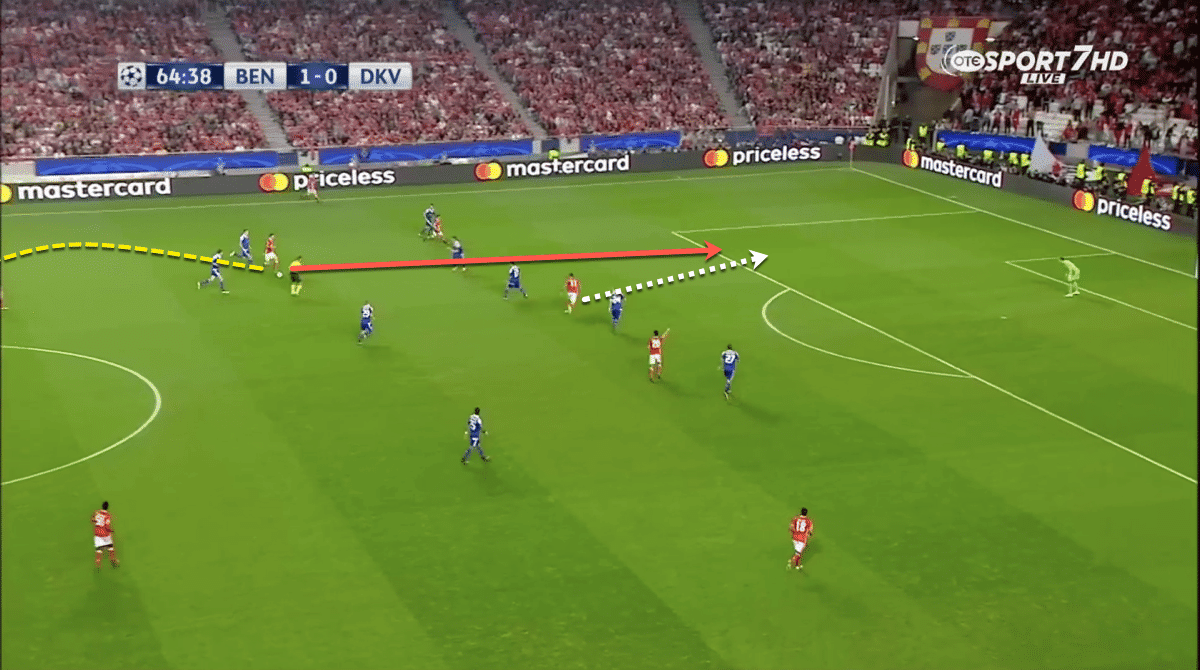 In the above sequence, we see Lindelöf collect the ball on the halfway line before dribbling through midfield and creating a scoring chance for Kostas Mitroglou with a superb, slide-rule through-ball. This not only shows the defender's comfort in possession, but also his vision to spot the run of the forward and the ability to execute a difficult pass. 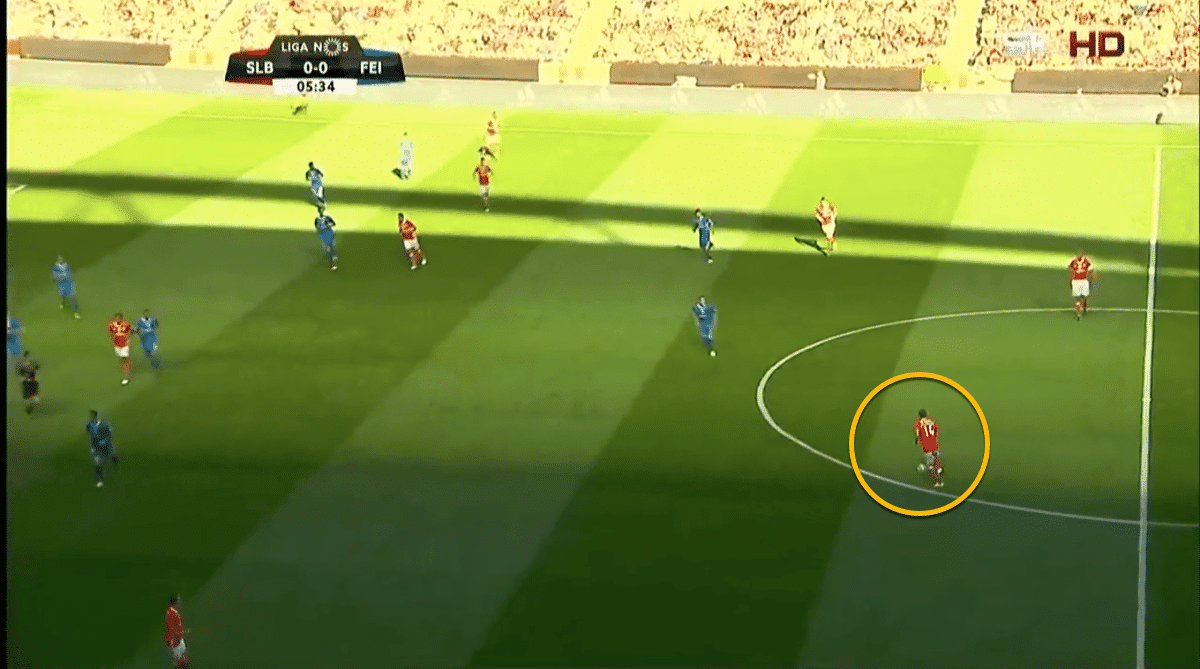 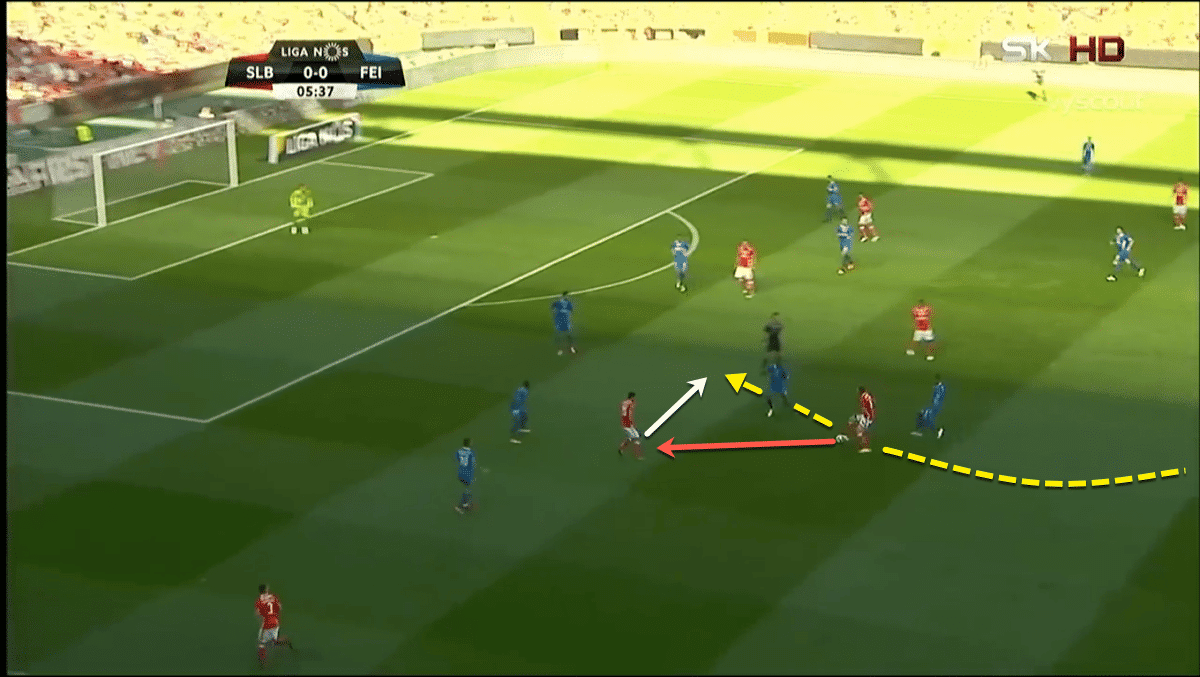 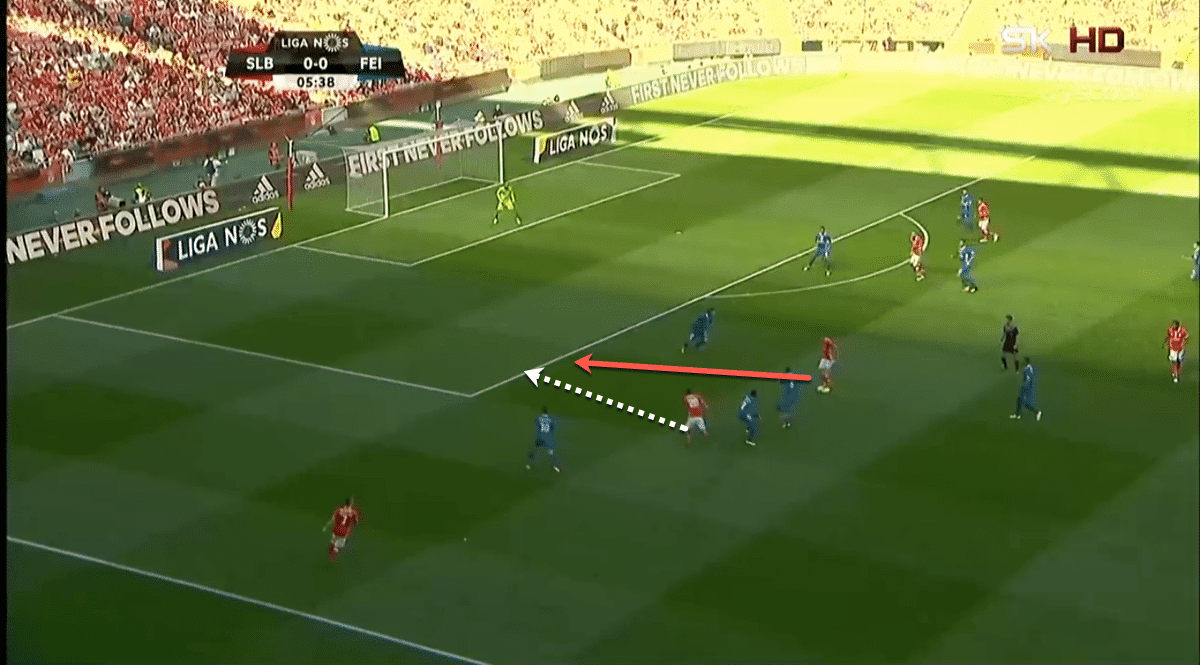 Here, again, Lindelöf collected the ball near the halfway line and moved into the space ahead of him. Rather than playing a simple pass and returning to his defensive station, he showed confidence and adventure by continuing his progress and exchanging passes with a team-mate, opening up another scoring opportunity.

When veteran Luisão retuned to the line-up last season, Lindelöf moved over to left centre-back to accommodate the Brazilian. Although the 22-year-old performed well in the role, many of his best performances have come from the right side of central defence.

From there, the right-footed Swede was able to link incredibly effectively with adventurous right-back Nélson Semedo, a reported Barcelona transfer target. Bailly also tends to start at right-centre-back, so that could be a problem for Mourinho to solve should Lindelöf arrive at Old Trafford, where he would surely relish the prospect of picking out the forward runs of Antonio Valencia with his trademark vertical passes.

Being a young defender, there are still flaws in Lindelöf's game. His positioning on aerial balls isn't as consistent as Mourinho would hope just yet, and he can occasionally be rushed into clearing his lines when a little extra composure might allow for possession to be retained — but a safety-first approach such as this would hardly be anathema to the United boss, while the Benfica star's ability to fill in at right-back could also prove valuable.

They may have been linked with more recognisable names this summer, but for the price being mooted, in the current market, United could have a bargain on their hands with Lindelöf. And one well suited to their needs at that.