MK Dons are threatening to find a little bit of form but Lincoln have shown signs of life recently too. Can Lincoln build some momentum? Find out with our Lincoln vs MK Dons match preview with free tips, predictions and odds mentioned along the way.

Lincoln vs MK Dons: A trio of predictions

Lincoln's form had been stuttering before the weekend but the nature of their draw with Blackpool showed there is plenty of fight in their camp as they chase a top six finish. It doesn't transform their form from a statistical standpoint with just four points from their last five at home but MK Dons are hardly a unstoppable beast; they've lost three and drawn one of their last five away games. The away side have nothing but pride to play for. For Lincoln, their two goal comeback against Blackpool means they still have lots to play for; it could well be that which proves the difference here.

Our next prediction puts the match winner to one side and instead focuses on the number of goals that are likely to fly in. We think there will be a few. Why? Well, a quick look over the past few fixtures suggests it for starters. Lincoln's last five matches at home have all seen at least three goals whilst MK Dons have exceeded the 2.5 mark in four of their last five away. Where the head to head record is concerned, that stands at three of the last four meetings seeing north of the 2.5 goals measure too.

21-year-old Scully only has eight goals to his name this season but he has only averaged 50 minutes on the grass per game. He only came on for 19 minutes on Saturday too but he scored Lincoln's first to get their comeback underway; it followed another goal in his last outing at Oxford. Will he be given a crack from the starting whistle against MK Dons? Whether he does or not, he's a man in form with two from two.

Michael Appleton's men haven't been on the greatest run but results at the weekend have put the playoffs well and truly back on the radar. Standing in their way is a MK Dons side that are unbeaten in two but with nothing but midtable mediocrity in wait at match 46. Whether Lincoln run out winners will boil down to whether they can ask the right questions of their opponents.

A brief FAQ for Lincoln vs MK Dons 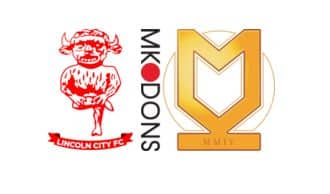