Lille plays Auxerre in the Coupe de France Round 32. The last competitive encounter between these teams was in the same cup fixture, a game that Auxerre won 1-0 away from home. In the last four trips to Lille, Auxerre recorded 2W, 1D and 1L. It is a good run that the visitors hope to build on when they lock horns with the reigning Ligue 1 champions.

Our Free and Best Predictions for Lille vs Auxerre

Our predictions for Lille vs Auxerre are premised on extensive research and in-depth statistical analysis. Note that the last encounter between Lille and Auxerre was in October 2013, so we expect a lot to have changed. For that, our picks for this game rely mostly on the current performances of these teams.

Lille is our pick to win this game. After securing a place in the UEFA Champions League despite struggles in the domestic league, Lille’s thirst for silverware this season is evident. Lille defeated PSG to win the Trophee des Champions on the first day of August this year. We expect the reigning champions to mount a strong challenge in this match. There is every reason to back the hosts as the favourites to win the first half.

Auxerre has been a worthy opponent in this matchup, bagging five draws and winning 8 times. On the other hand, Lille boasts 7 wins in this encounter. And while our first pick backs the hosts to win this game, defensive challenges have reduced Lille to only two clean sheets in the last nine matches despite going unbeaten within that duration. Auxerre is currently 3rd on Ligue 2 hence promotion candidates. The visitors have lost only once in the last eight matches across all competitions. The visitors scored in all their eight games.

Our last prediction for Lille vs Auxerre settles on a goal-fest. With both sides expected to score and Lille to win this match, it means at least three goals will be scored at full-time.

Match Preview: Lille Hope to Advance in another Cup Competition

Lille’s exploits in Coupe de France last season ended with a 3-0 defeat against PSG in the quarterfinals. The reigning champions got their revenge against the Parisians with a 1-0 victory in the Trophee des Champions final. The question is will Lille advance beyond quarters in the Coupe de France this season? This first fixture against Auxerre should be easy for Lille, albeit, the last meeting, which Lille lost was in this competition Round 16. Both sides are having a good run, especially when it comes to scoring goals so we expect to see a goal-fest in this fixture. 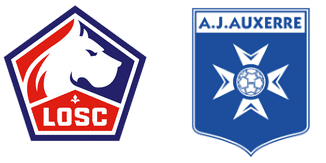 Where is the venue for this Coupe de France fixture between Lille and Auxerre?

Stade Pierre Mauroy in Lille is the match venue.

When is the fixture date?