Along with Eric Cantona’s kung-fu kick, Fabrizio Ravanelli’s over-the-head shirt celebration and Sergio Aguero’s title-clinching strike for Manchester City; one of the abiding images of the Premier League era has to be Dalian Atkinson celebrating in front of a delirious away end in the rain at Selhurst Park along with a man holding an umbrella.

Having picked up the ball deep in his own half, a deft touch immediately took him away from his marker, skipping past two more Wimbledon players and pausing briefly as he reached the edge of the penalty area, he then produced a delicately executed chip that floated over the outstretched Hans Segers.

The wonder goal, which a 3-2 away win over Wimbledon, is one of the greatest individual goals in modern times – eventually winning Match of the Day’s ‘Goal of the Season' competition. But Atkinson’s effort that day was not just a rare moment of brilliance or a freak strike, it encapsulated a player who had skill, pace, power and determination in abundance and was not afraid to use it.

Dalian Robert Atkinson was born in Shrewsbury on March 21 1968. He grew up in Telford, Shropshire and by his mid-teens his natural talent and undisputed ability meant that he had been enrolled into Ipswich Town’s academy alongside the likes of fellow future professionals Jason Dozzell and Chris Kiwomya.

By the age of 19 he had already made his mark scoring goals against players his senior, including a hat-trick against a Middlesbrough side which contained Tony Mowbray and future Manchester United defender and future record signing Gary Pallister.

It was not long before he had caught the eye of scouts and managers alike, particularly the then Sheffield Wednesday boss Ron Atkinson who brought Atkinson to Hillsborough as a strike partner for the similarly prolific David Hirst for £450,000.

In his first season with the Owls Atkinson quickly forged an understanding with Hirst but his 10 goals that season could not save Wednesday from a final day relegation from what was then the First Division. The following season and with Wednesday facing the prospect of second tier football, the Yorkshire club were forced to cash-in and Atkinson was signed by Spanish side Real Sociedad for £1.9 million. 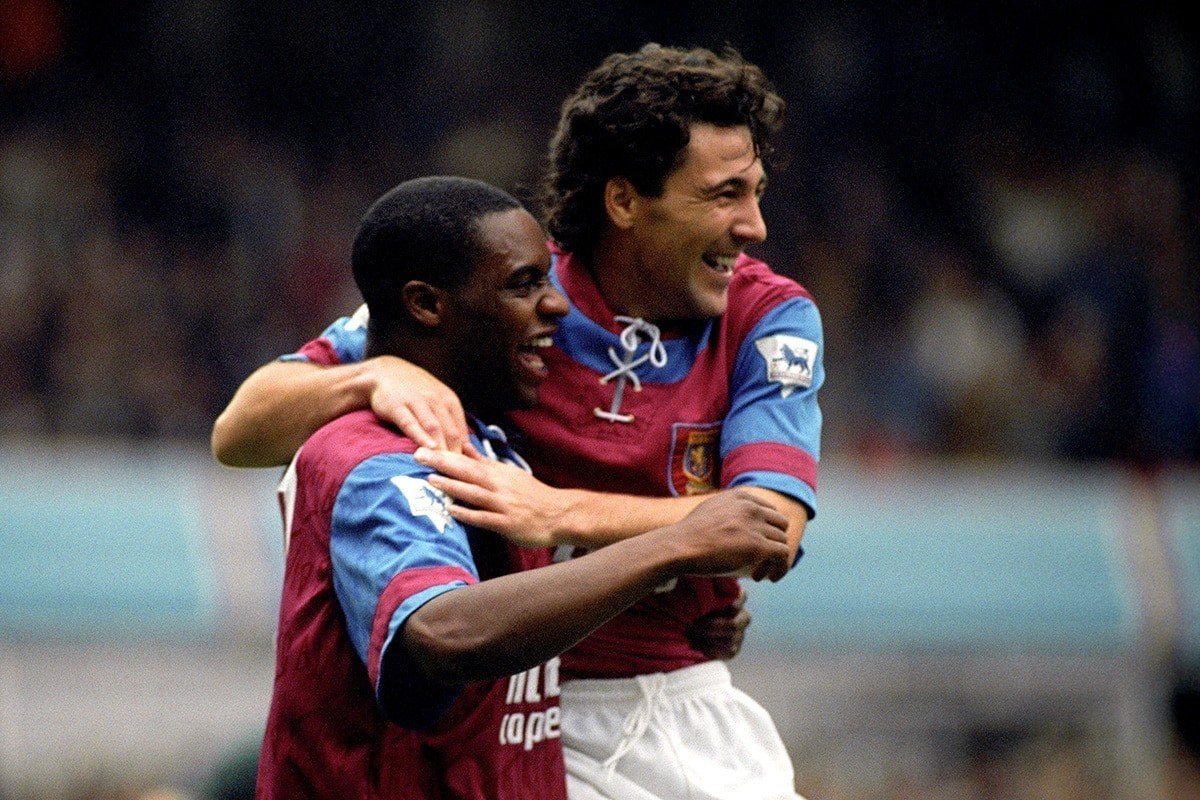 He would be the Spanish club’s first ever black player, and it was while playing there that Atkinson came face-to-face with the uglier side of the continental game. For the first time he was playing in front of fans who were not used to having a non-white face in their side. Bizarrely, he was given the nickname el txipiron by the Sociedad faithful, which translates as the ‘squid'.

Regardless of the abuse he faced, he soon teamed up with former Liverpool poacher John Aldridge in San Sebastián – scoring 12 goals in 29 matches as the Republic of Ireland forward’s main strike partner. But despite great form on the pitch, Atkinson struggled off the field with the demons that plagued him throughout, not just his career, but his personal life too.

Despite his ability to gel with his fellow team-mates and outgoing personality, the club appeared unhappy with his attitude off the pitch. A string of disciplinary issues meant he fell out with the owners, paving the way for a swift move back to England.

It was Aston Villa that offered him a life-line with a £1.6m move that reunited him with his former manager, mentor and namesake, Ron Atkinson. It also provided Atkinson with arguably the greatest period in his career and one for which he is most fondly remembered by fans of all clubs. 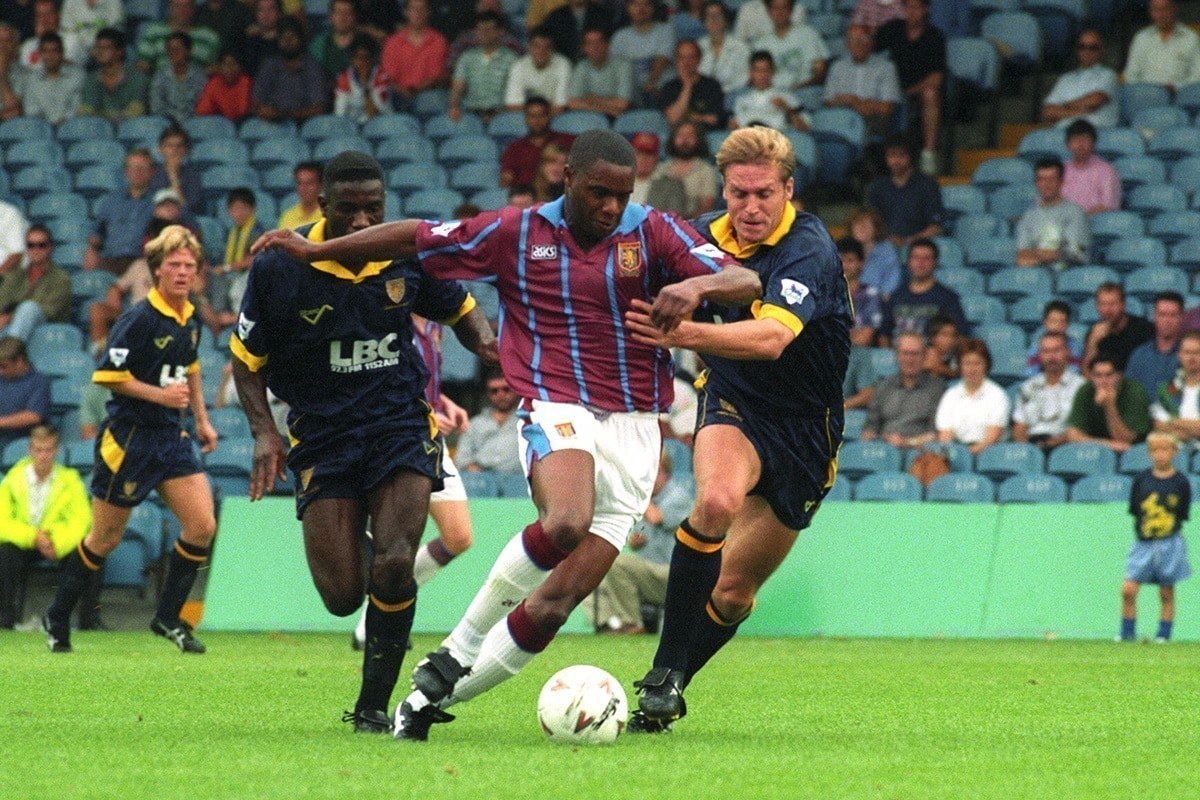 In the inaugural season of the Premier League in 1992/93 an exciting Aston Villa side had offered a little bit of everything. With Dean Saunders up front alongside Atkinson and Dwight Yorke they received regular service provided by the likes of Kevin Richardson and Ray Houghton. With the ever-reliable Paul McGrath at the heart of the defence, Villa were seen as serious contenders; incredible seeing as they had only just regained their top-flight status.

By Christmas Villa were in a three-way battle with leaders Norwich City and an ever-improving Manchester United side, who had just added the services of Eric Cantona to their ranks.

After a nerve jangling run-in Villa finally fell agonisingly short, losing their penultimate game at home to Oldham – a defeat that handed the new Premier League trophy to their Old Trafford rivals who had waited 26 years since their last title success. Even so, it was still Villa’s most dramatic end to a season since they won the league back in 1981.

Atkinson was prolific in the first half of that season, scoring 12 goals before suffering an injury which ruled him out for much of the remainder of the campaign. Such was his influence on the side and the threat he posed to opposition sides his manager Ron Atkinson later claimed that Villa would have won the title had his striker been fit.

There was to be silverware for the Atkinsons when they defeated a treble-chasing Manchester United at Wembley in the League Cup final of 1994 – Dalian opening the scoring in a memorable 3-1 victory.

Despite Wembley success the previous season, Villa started the following season poorly and a bad run of form would ultimately cost Ron Atkinson his job. It was to be bad news for one of his favourite ‘sons' too as his successor, Brian Little, did not see a future for the No.10 at Villa Park under his management.

Although he had only played 85 times for Villa and netted 23 times, Atkinson was hailed as something of a cult hero by the club and its fans where his picture still hangs in pride-of-place at the training ground.

He eventually moved to Turkish side Fenerbahçe in 1995 in what was to be the last big move of his career. While plying his trade in Istanbul Atkinson showed that his scoring touch had not deserted him, scoring 10 times in just 21 games for the club over two seasons. Atkinson failed to settle in Turkey, though, and became something of a journeyman for the latter stages of his playing days.

He enjoyed mixed fortunes during loan periods at Metz and Manchester City before leaving the club in 1997 and ending his career with spells in Saudi Arabia and South Korea, finally retiring as a player in 2001 aged 33.

Throughout his playing days Dalian Atkinson endured something of a troubled private life. He struggled with depression and mental illness, was banned from driving on three separate occasions, crashed his car while uninsured, battled bankruptcy and often faced disciplinary action from the clubs he played for. He never married and denied rumours that he had fathered a child from a relationship he had when in his twenties.

But ask anyone who played alongside him and they will talk of a larger-than-life character who was the life and soul of the party as well as being a joy to be around.

“He was a really popular player with team-mates,” said his former manager Ron Atkinson when talking about the player he signed twice.  “He was a really generous lad – sometimes too generous for his own good – but a good lad. He always had a smile on his face.”

Meanwhile, former strike partner at Sheffield Wednesday David Hirst added: “On his day he was unplayable and even on an off-day he could be unplayable because of his lightning pace. He was a great lad and a great character to have around the club.”

The facts may not paint him as one of the game’s all-time greats, but anyone who played with or watched Dalian Atkinson will always talk of a Betmgm player who gave 100 per cent every time he was asked. An attacking threat for each club he represented, Atkinson cemented his status as a genuine Premier League icon.