On Wednesday night, Manchester City put West Ham United to the sword. A devastating first-half saw them leave the London Stadium with a 4-0 victory.

Every Angle of @gabrieljesus33's first goal in a City shirt!

Does Aguero Have a Future at City?

Wednesday was a window into the future for Man City fans. There’s no doubt that Aguero will be involved, he’s too good a finisher not to win minutes, but was this a sign to a situation where the Manchester club no longer have to rely on the 28-year-old.

From the first minute, the attack worked hard to close West Ham down when the home side where in possession. It was that desire to cut off any passing lanes that lead to the first goal. 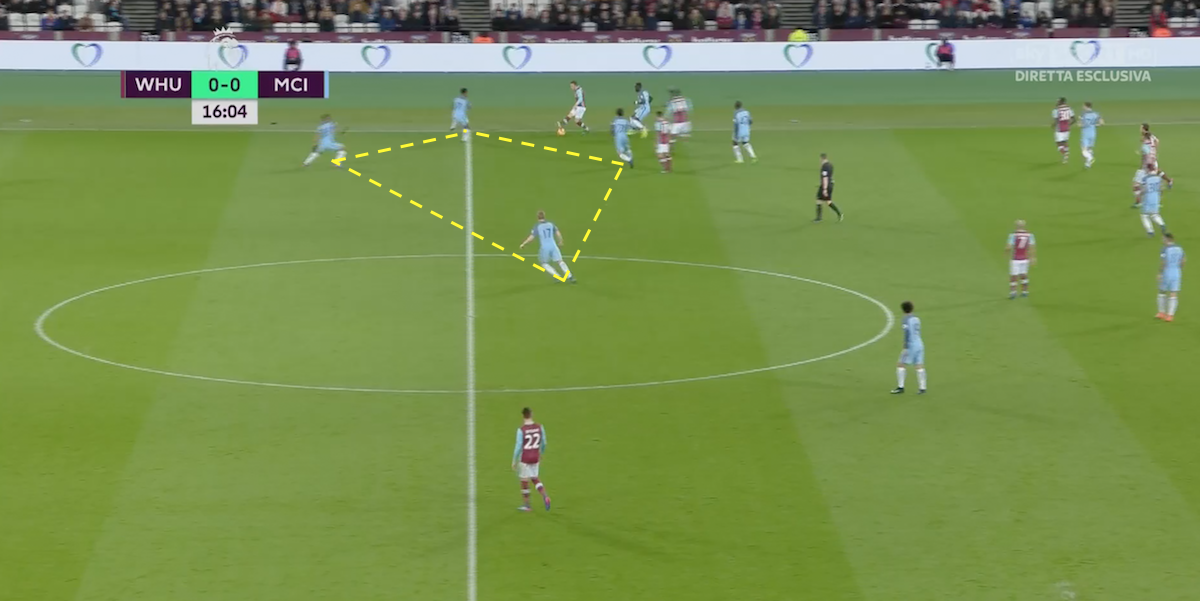 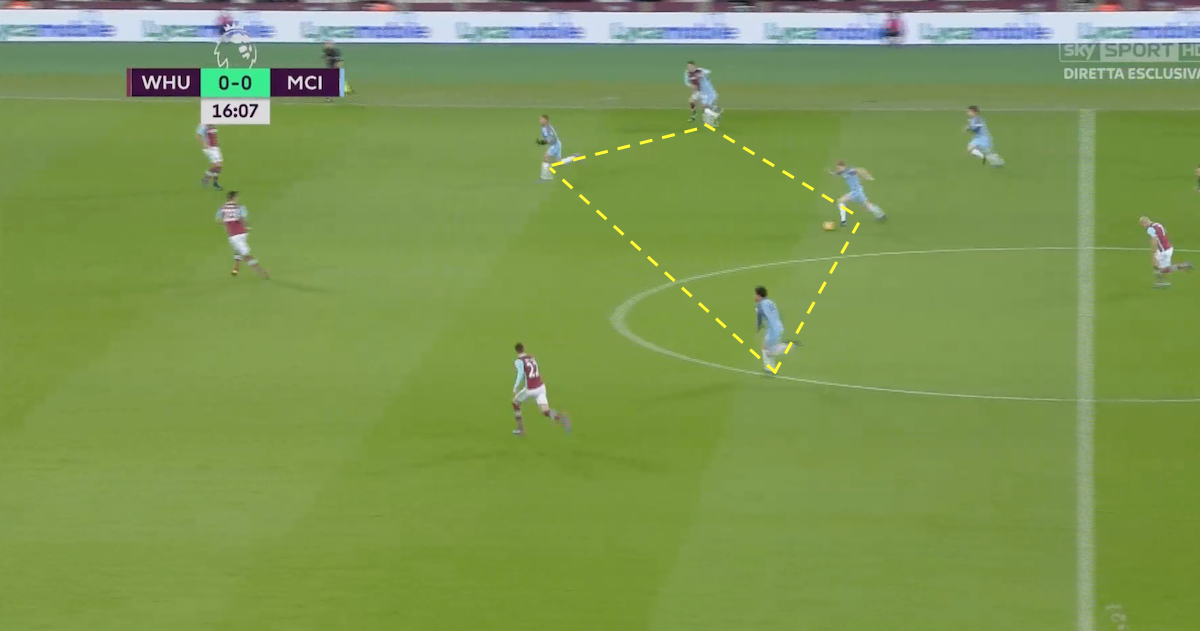 They won the ball back together, and then, as you can see from the graphic below, they attack as a unit. Even Sane’s run to the left gives Jesus more space to receive the pass and find De Bruyne for the finish.

This is Aguero’s fourth season in England and he is on course for his lowest goal-scoring season to date. He has played 17 games this campaign and scored 11 times.

He’s played 73% of City’s games, continuing that trend he would play 11 more games and at his same rate of success he would score 18 goals.

In his first season at the club he scored 17 times in 23 games. This, in terms of goals per game, would be his worst season in England.

Injuries have been a problem and as Duncan Castles reported in an exclusive with Yahoo Sports, City have ran out of patience and don’t believe they can return him to full-fitness.

‘Aguero’s susceptibility to muscular injury is such that City’s medical department is understood to consider it almost impossible to keep the free scoring forward in excellent physical condition for an entire domestic and European campaign.

‘When he is fit to play, the Argentine’s irascibility has proved a further problem area with Aguero already missing six matches through suspension since Guardiola’s arrival.’

As Alan Hansen once said, “You can’t win anything with kids.” That front four had an average age of 21.75. Not quite under-20 as was reported, but still a huge nod to what to expect over the next four or five years.

Gabriel Jesus – who nearly scored on his debut against Tottenham Hotpsur – added a goal and an assist and blended beautifully into the attack.

“You never know, it's like a watermelon – you have to open and see if it is good or not,” Guardiola responded when asked about the potential Jesus has. “The perspective was good. He's a young talent. But he has a huge mentality. He's so aggressive.

“He wants to become a good player. He has dreams and he has things he wants to do in the future in his career. That helps a lot. 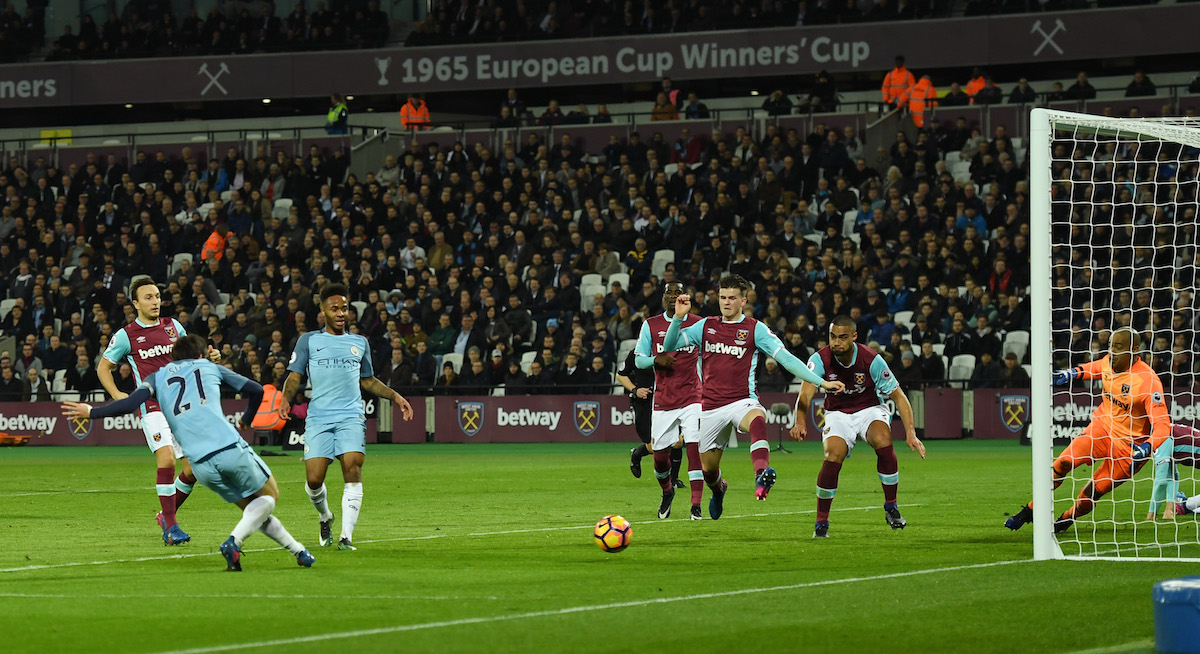 David Silva and Jesus have received most of the plaudits from the win, but Sane’s performance can’t be overlooked. He was everywhere, both in attack and defence. The third goal was all about the German youngster.

The initial attack breakdown after Sterling couldn’t guide his pass onto De Bruyne’s right-foot. At that moment, Sane is nearly inside the six-yard box. Nine seconds later he is nearly on the half-way line. 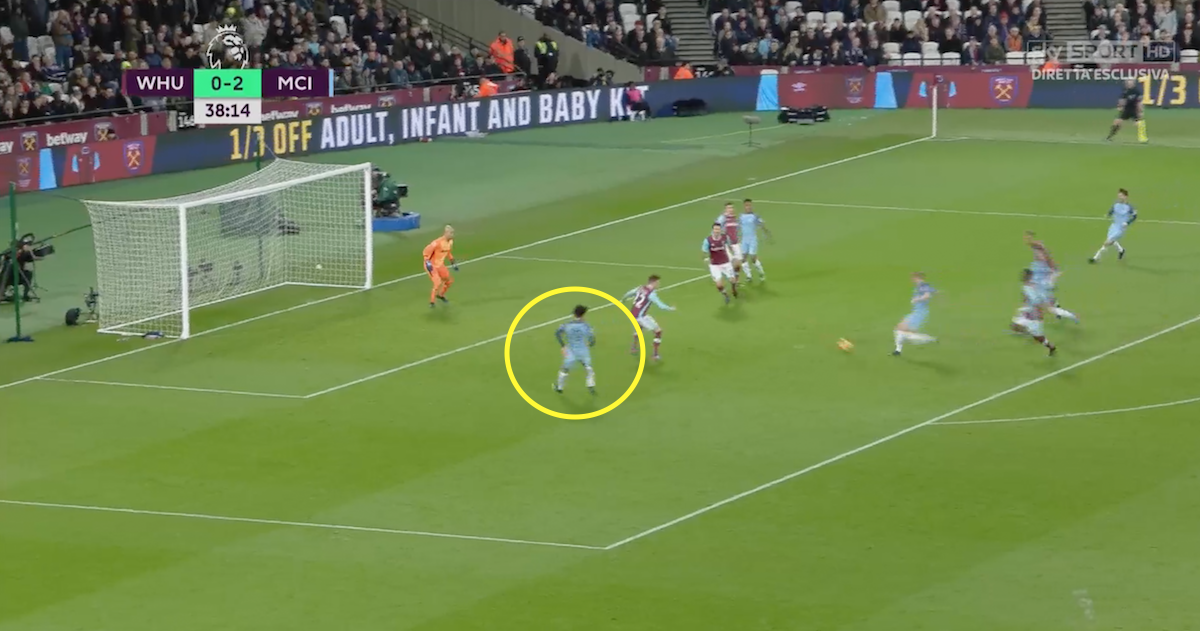 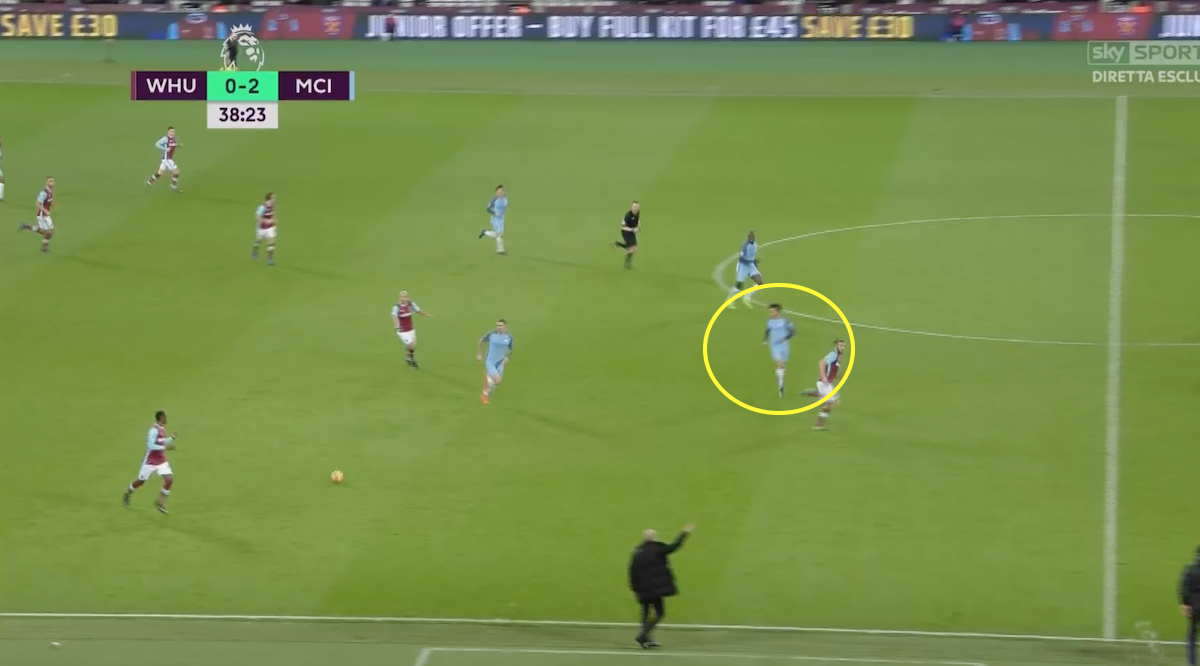 What happens next is superb. He anticipates the inside pass, springs into action and drives into attack. When teams are set up to frustrate and defend stubbornly, you need to transition quickly. City worked that perfectly on Wednesday. 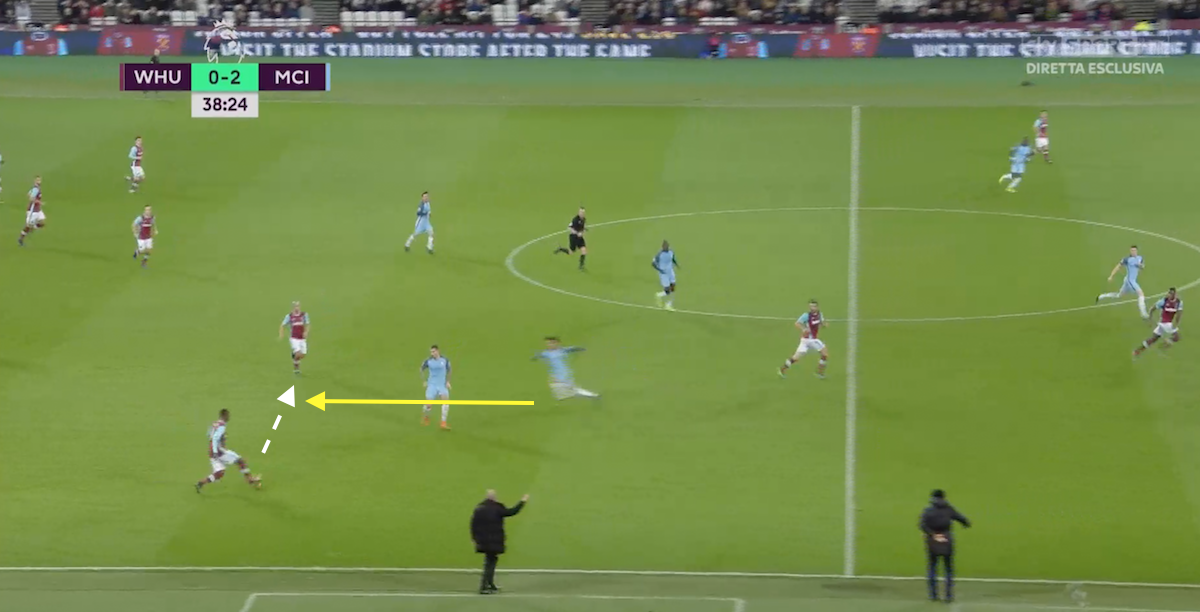 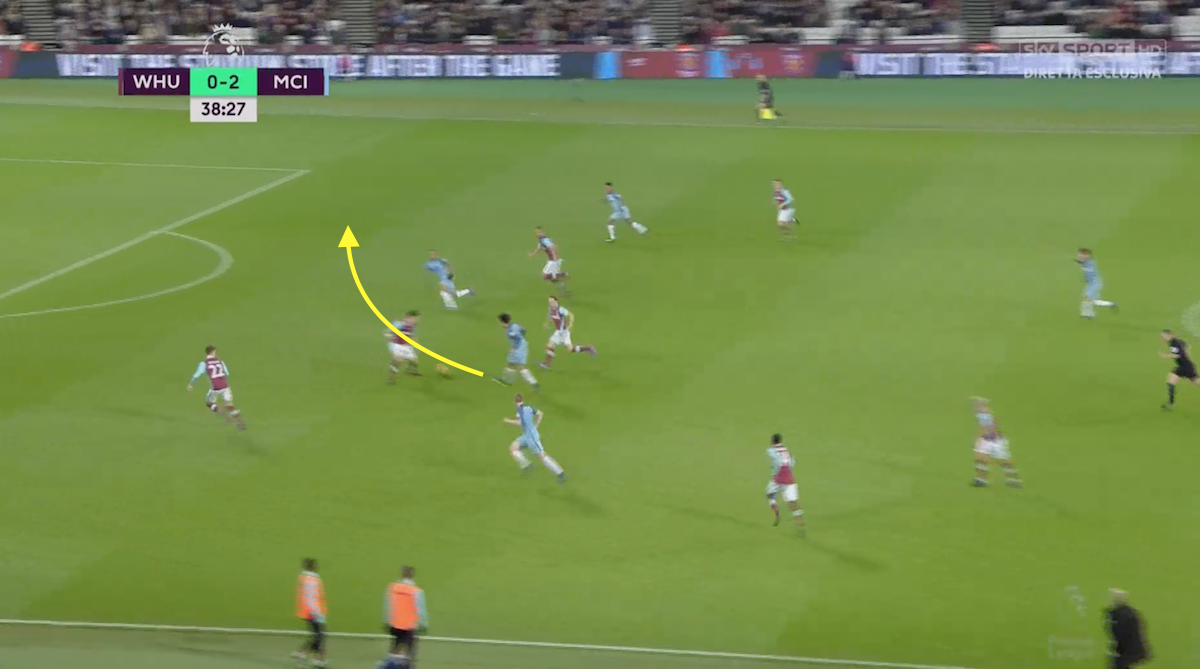 The 21-year-old has the sense and vision to pick out Sterling’s run beautifully before Jesus was able to score his first Premier League goal.

At times, it wasn’t clear who was meant to play where. Sane, Jesus and Sterling would switch positions and drag the defence around the pitch. De Bruyne is the perfect follow-up option. 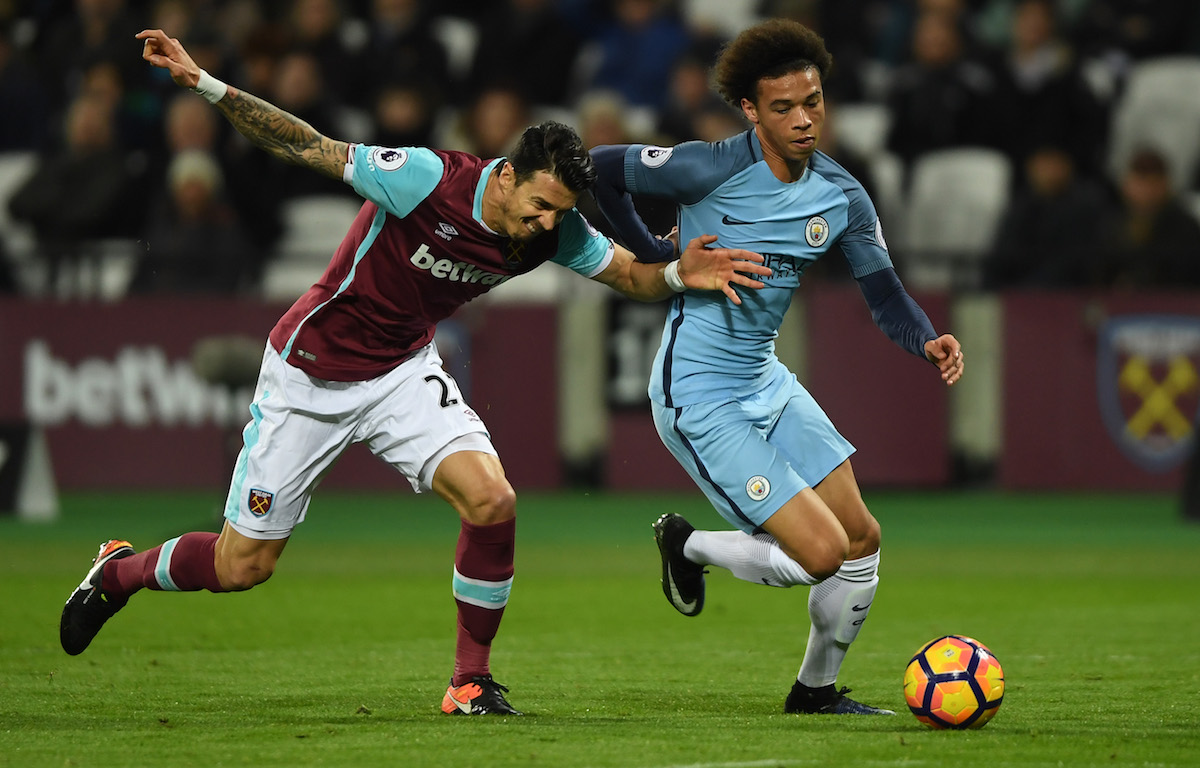 At 25 years old, he’s experienced and knows how to find space and plug the gaps, plus, as his goal showed, he is an excellent player in the final third. Especially when you are occupied tracking three young bucks.

Then, there’s Silva. The little wizard is still on another level. Drifting across the field, picking passes, threading passes. What are we going to do when Silva decides enough is enough? There are not many like him.

At 31, instead of thinking of replacing Aguero, Guardiola needs to have a plan in place to find a successor to Silva’s throne – perhaps namesake Bernardo from AS Monaco.

Deciding not to play Aguero does not mean that the Spanish boss is putting all his faith in a bunch of youngsters. There is experience there too. Nolito and Jesus Navas are over 30 and can help guide the new stars.

It’s hard to say that City don’t need Aguero after everything he has done for the club. There is even a lounge at the Etihad named after his injury-time goal that sealed the 2012 Premier League title, but there comes a time when you must move on.

Rather than wait for his value to drop or his injury problems to potentially get worse, this summer could be the perfect time to move to a future that doesn’t include Aguero.

Who is Manchester City’s newest youngster Yangel Herrera? Find out with our profile.