Frank Lampard's commitment to homegrown talent is so strong the Chelsea manager is reportedly prepared to splash as much as £50million on Brighton & Hove Albion‘s English defender, Lewis Dunk.

According to The Times, the Blues have enquired as to the Albion skipper's availability with the Seagulls holding firm on a £50million valuation of the defender.

Centre-back is an area where Lampard appears keen to strengthen with Antonio Rüdiger missing all but 586 minutes of the season so far through injury, while Kurt Zouma and Andreas Christensen have shown themselves to be rough around the edges still.

In fact, it's Fikayo Tomori who, at 22 is the youngest of Chelsea's central defenders, who has shone brightest this season. But after electing to move David Luiz on in the summer, a more senior defensive linchpin to build around is something Chelsea need.

At 28 and with 94 Premier League appearances to his name, Dunk just about fits the bill. He's got plenty of games behind him and has established himself as a reliable Premier League central defender. But is he ready to make the step up to a club competing for the top four and silverware?

Clearly Lampard is not the only person who sees something in the Brighton-born stopper. Gareth Southgate called Dunk into his squad for the Three Lions' November 2018 friendly against the United States and he played the full 90 minutes in a 3-0 win.

To date, it's his only cap but it's hard to gauge too much from that game. Partially due to the state of the US team and also the fact the game was essentially a testimonial match for Wayne Rooney.

So what does a defender need to slot in at Stamford Bridge? For a start, they need to be comfortable on the ball. Liverpool pair Joe Gomez (85.97) and Virgil van Dijk (73.29) average the most passes per 90 of any Premier League centre-backs to have played in at least 25 per cent of available minutes.

While that's only enough to rank 13th in the top-flight, it's important to contextualise that standing by saying Graham Potter's side do not have as much of the ball as the Blues, or attempt as many passes per 90.

However, it's not like the 28-year-old would be coming from a side who practice an entirely different approach – Albion rank fifth in the top-flight for attempted passes with 415.55 against Chelsea's 505.5 – second only to Manchester City.

Dunk displays good range in his passing, with 11.5 categorised as long passes – the third-most by a centre-back per 90 – while also completing 13.05 passes in the opposition's half, showing good ball progression. 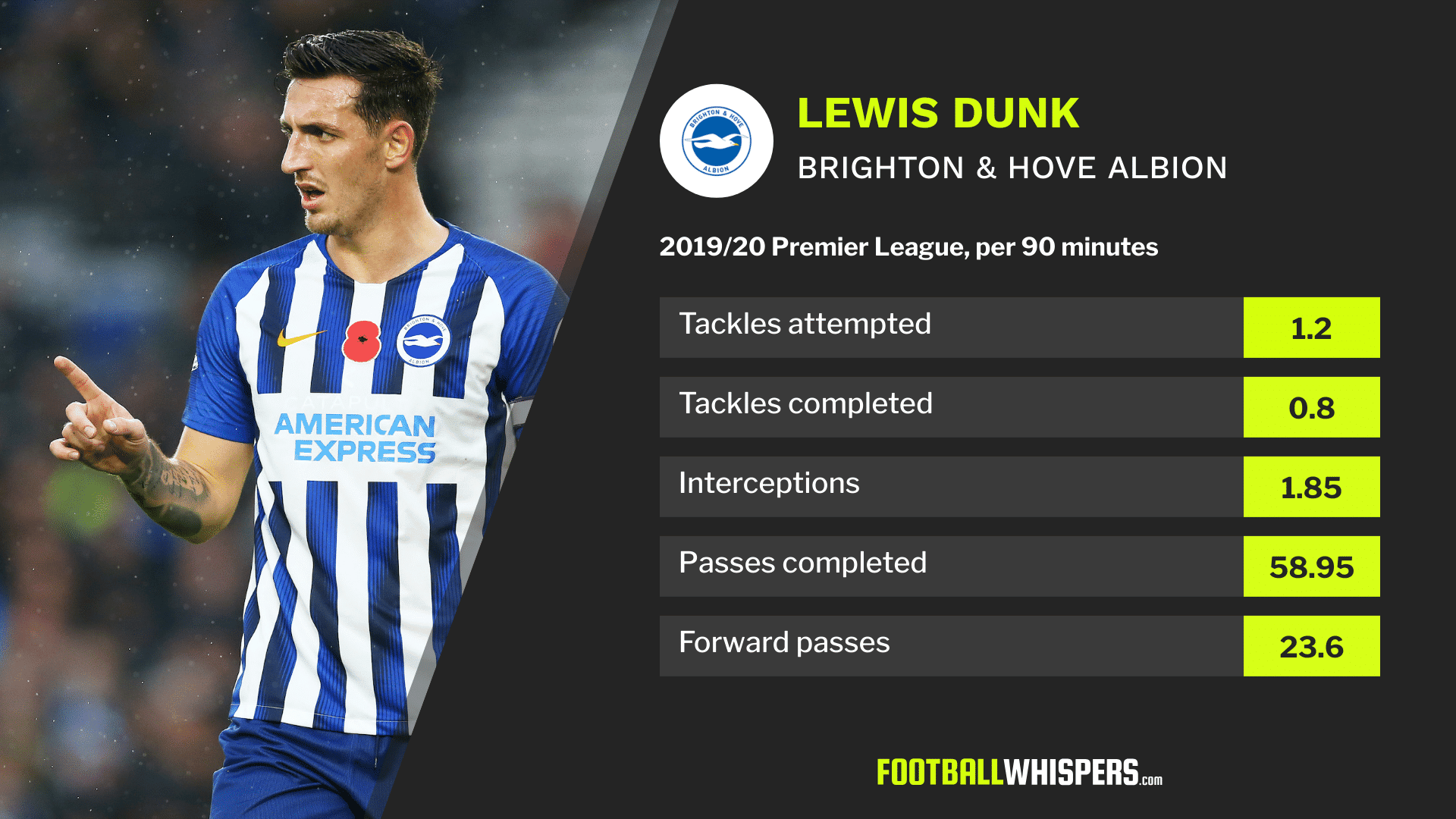 Being good in possession only counts for anything if you can win it back in the first place, though, and this is where Dunk thrives. A strong, aggressive defender with an impeccable sense of timing, it's little surprise the Brighton captain makes 1.85 interceptions per 90, putting him 18th among his central defensive peers.

Albion boss Potter believes Dunk has the potential, even at 28, to continue to improve.

“From my perspective, Lewis has been great to work with. He’s shown a really good level, I think there’s more to come from him as well – he’s not playing at his maximum,” Potter told FourFourTwo.

“We’re looking forward to working with him for the next few years because I think he can be a really, really top Premier League defender.”

The question for Chelsea is whether they would be best served forking out £50million on a player who is not in the ‘world-class' bracket. Spending that kind of fee on Dunk would make him a starter by default which could hamper the progress of Tomori and Christensen.

Only this week, Lampard quashed speculation the latter would be allowed to leave Stamford Bridge with Milan reportedly keen.

“I can rule it out,” Lampard said when asked about the Dane's future. “I like Andreas as a player; I've always liked him. I used to train with him and saw the talent coming through.”

This is the awkward position Chelsea now find themselves in. With so many talented young players thriving on the minutes they've been afforded by the club's registration ban, being able to sign more senior options could put a roadblock in their path.
Yet they need greater depth in some positions and, given the rate at which they've leaked goals this season, centre-back could be one of those areas. Lampard must now decide whether to put his faith in Chelsea's homegrown stars or follow the path of previous eras by buying in talent.