Maurizio Sarri may have claimed on his Chelsea unveiling that he is “bored by the transfer market” but signing a striker appears to have become the Blues  priority as they look to mount a return to the top four of the Premier League.

Of all the missing pieces for Chelsea last season from their title-winning campaign under Antonio Conte, arguably the most keenly felt was the departure of Atlético Madrid. The Spain striker’s exit an inevitability after a fractious six months at the club.

For the previous three seasons Costa had been Chelsea’s top scorer with 21, 16 and 22 goals but the man signed to replace him, Álvaro Morata, misfired after a bright start and managed just 11 in the league.

Morata is a very different striker to the bullish, physical powerhouse of Costa; more silky feet and clever runs and Sarri insists he doesn’t plan to sell the 25-year-old, despite strong interest in Serie A from Juventus and Milan.

Given the Italian coach’s acumen in bringing the very best out of attacking players, he may feel he can replicate Morata’s best form. But throughout the Spaniard’s struggles at Stamford Bridge, it’s clear he isn’t comfortable as the sole targetman – something which prompted the surprise purchase of Olivier Giroud in January.

How the new manager plans to line-up is an area for debate and, in truth, we won’t know what Sarri’s Chelsea properly looks like until the winter but based on his Napoli model and the few examples we’ve witnessed in pre-season, it’ll be a shift from Conte’s 3-4-3 to a 4-3-3.

Morata has played the No.9 role to mixed results against Inter and Perth Glory but hasn’t done much to suggest he can operate in that position long-term, which, ignoring the potential of him still being sold, explains the interest this summer in Gonzalo Higuaín and Robert Lewandowski.

Sarri’s past work with Higuaín, where the Argentine scored 36 goals in 35 Serie A games before departing to Juve, makes him an obvious link but Lewandowski has been bubbling under all summer and the Pole increasingly appears the more likely candidate.

New Bayern coach Nico Kovac insisted this week he has no desire for the 29-year-old to leave the club but the Bavarian giants are not daft and are not one of the best-run clubs in world football for nothing.

Lewandowski may be under contract until 2021 but given his fading relationship management and fans, indifferent last season and the belief within the club that his powers could be on the wane, this summer represents an excellent, and maybe final, chance to recoup a substantial fee.

That final part of the equation could also be why Lewandowski remains a Bayern player, given how reluctant – Cristiano Ronaldo aside – clubs are to spend serious millions on players approaching the twilight of their career.

The case for declares he is such an upgrade on what Chelsea already have, if a suitable figure can be negotiated with the German champions he should be able to provide that central goal threat lost by Costa’s departure while also easing the burden on Eden Hazard and Morata, should he stay.

He is a vastly experienced striker who knows the requirements of playing for a genuine elite club, and there is an argument that states Chelsea will be a less scrutinised and pressurised environment than Bayern. 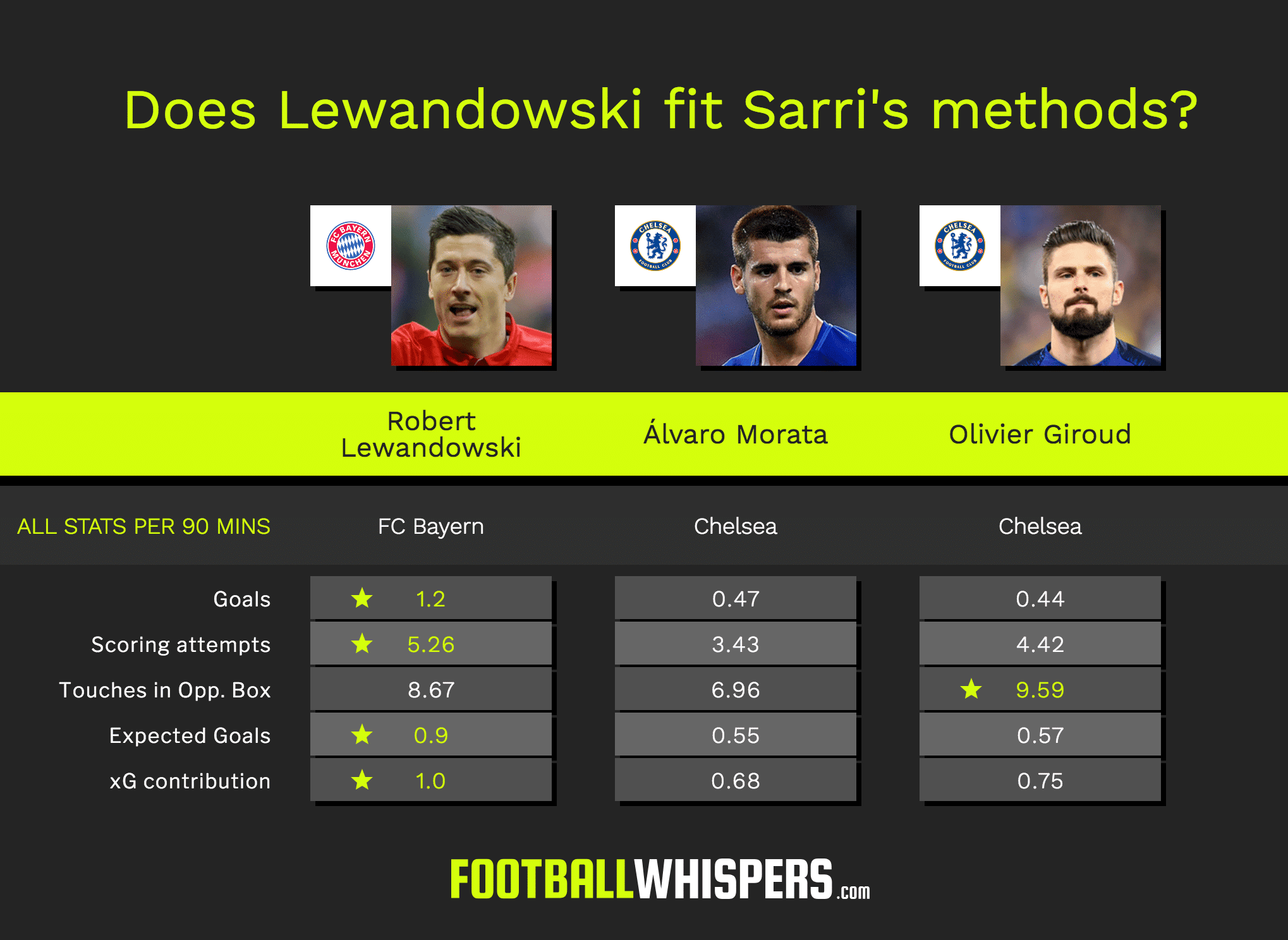 Comparing those metrics with Morata and Giroud’s production reveals a sizeable disparity. Lewandowski is an elite goalscorer and has been for the last seven years, we knew that already.

But while that is a huge box to tick in terms of what Chelsea need on the scoring front, is that necessarily what Sarri wants?

Although his debut season at the Stadio San Paolo coincided with Higuaín’s prolific swansong, the Argentine was a leftover from Rafael Benitez’s reign and Sarri’s time at Napoli was largely marked by his preference at playing with flexible forwards who weren’t defined necessarily as strikers.

He turned Dries Mertens – previously identified as a mercurial winger – into one of the highest-scorers in Europe during the 2016/17 campaign with 34 goals in 46 games in all competitions and also got career-best hauls out of Lorenzo Insigne (20) and Marek Hamsik (15), while José Callejón enjoyed his second-highest goalscoring campaign (17).

Although they weren’t as productive last term, Sarri retained that quartet as his primary offensive options despite the presence of a more conventional striker in the squad in Arek Milik, coincidentally Lewandowski’s international team-mate, who made just three Serie A starts.

What bonded the four Napoli forwards was their ability to create as well as score chances, as they were all either in or just double figures for assists in 2016/17. Admittedly, again, there was a drop off for the most recent campaign.

Like Higuain, all were at the club before he arrived but it’s how Sarri changed them as forwards that stands out. Would Lewandowski be as malleable? 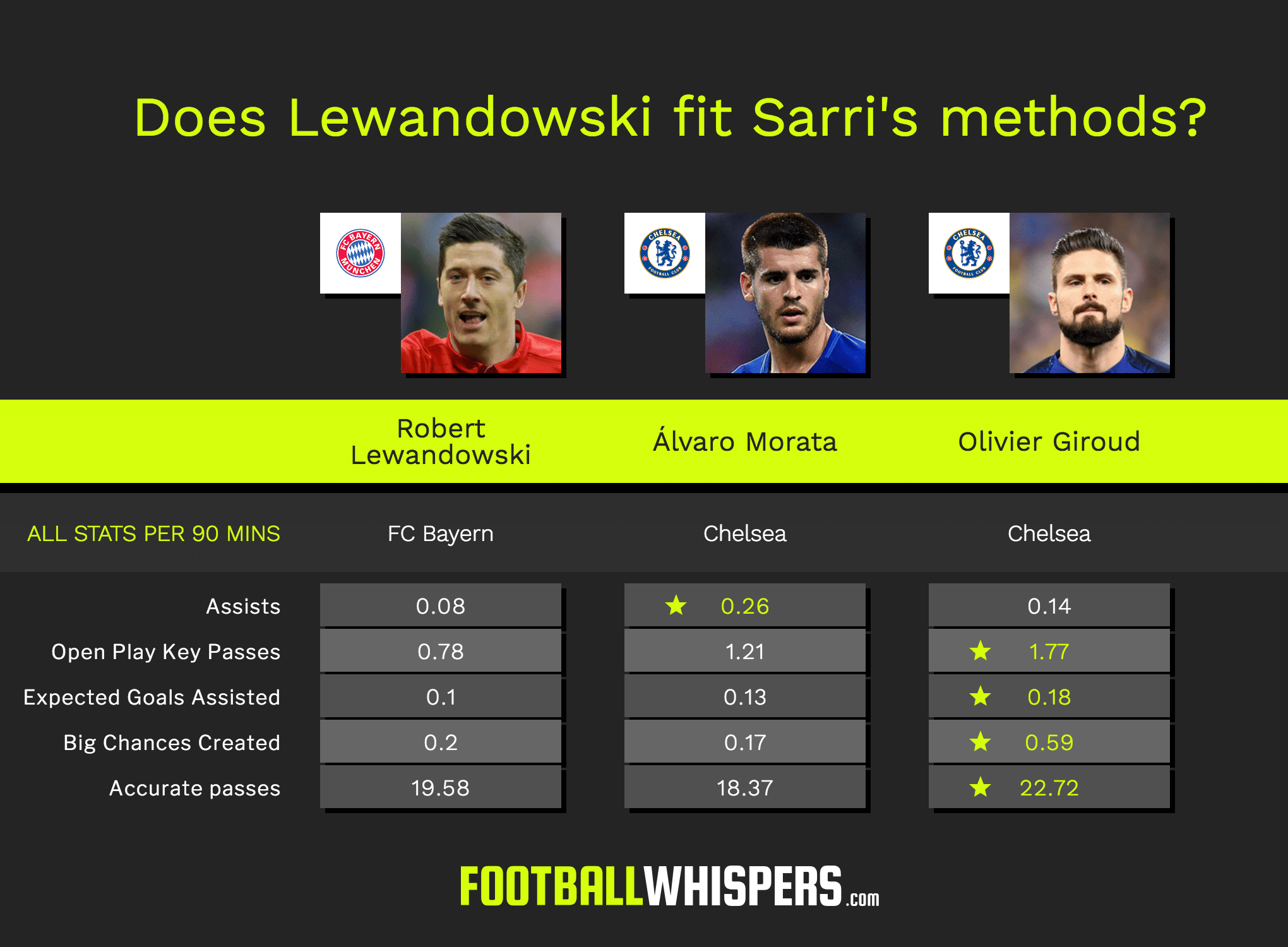 Lewandowski’s link-up play is very good, but he isn’t a striker who’s going to make opportunities for others with just 0.78 open play chances created per 90 in the Bundesliga and an expected assists number of 0.1; nor is he one to break a defensive line (0.78 takes ons).

That may not matter as Chelsea have Hazard, Jorginho, Willian (depending if he stays), Cesc Fàbregas, Marcos Alonso to do the heavy lifting in a creative sense.

Over the last two Premier League seasons, Hazard ranks first for open play key passes (2.58), Fàbregas third (2.3) and Willian eighth (1.82), although it’s on the former two who make the top 20 for expected assists.

Such is the influence Jorginho should have on this team he should add another layer of creativity and Sarri won’t require a multi-faceted forward who can be a goal taker and maker, but, that ignores a lot of the methodology he showcased at Napoli which has got him the job in the first place.

Lewandowski would undoubtedly bring goals to the Bridge, but at 29 and with a considerable transfer fee and salary to factor in, may not be exactly the right fit for the new man in the dugout.

Sarri may feel Morata is potentially the more adaptable man for the job.