The last game scheduled for Sunday in La Liga is the city derby of Barcelona, the Levante vs Barcelona duel. If you want to know more about this derby, check our preview of the game and our free betting predictions.

Our favourite betting picks and tips for Levante vs Barcelona

If you are not sure what is the right bet for Levante vs Barcelona, check our top betting tips for this game right now:

Although Barcelona has been on a tear in the last few months and they are currently on a six-game winning streak, it's fair to say that Levante has done well lately since they finally managed to get up from the last place in which they were the entire season.

Levante is still in the relegation zone and likely to lose this game, but we can see them scoring in this game, as well as Barcelona. After all, both teams scored in three of the last five h2h duels between these teams.

Pierre-Emerick Aubameyang to Score at Any Time

Ever since he arrived from Arsenal on a free transfer, Aubameyang has looked like a new man. So far, the striker managed to find the net seven times in eight league games for Blaugrana.

With that in mind, we can see his hot streak continuing against Levante, especially since Levante concedes nearly two goals per game. So, Barcelona is bound to score multiple times here and Aubameyan should net at least one goal.

The top odds and useful stats for Levante vs Barcelona

If you want to bet the best La Liga betting odds, including the odds for Levante vs Barcelona, you've come to the right place:

Latest form, news, and potential lineups for Levante vs Barcelona

Even though the guests are the clear favourites, this is still a city derby and we expect an interesting duel. So, let's take a closer look at both teams:

After spending most of the season in the last place in the standings and struggling to win any games, Levante finally rose up from the dead in the past month or so and now they still have a chance to survive. At the moment, Levante is six points behind the first team outside of the relegation zone with eight rounds left in the season, so those chances are slim, but their fans are certainly not losing hope.

Unfortunately, Levante has a lot of problems with injuries at the moment as well, with Martin Caceres, Shkodran Mustafi, Dani Gomez, Roberto Soldado, Jorge de Frutos, Oscar Duarte, and Carlos Clerc all on the team's injury list.

Fourteen rounds have passed in La Liga since Barcelona lost their last game and only four of those games have been draws – the other ten have all been wins, including some impressive wins like the 4-0 win against Real in Madrid. So, it's safe to say that Barcelona is in great form at the moment and that it's hard to see who can stop them right now.

That being said, Blaugrana will be without Ansu Fati, Memphis Depay, Segino Dest, and Sergi Roberto in this game since they are all on the team's injury list. We might also see some changes to the standard starting lineup since Barcelona has the rematch against Frankfurt in Europa League quarter-finals next week.

The most frequent questions for Levante vs Barcelona 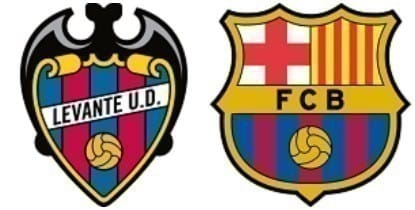