Against all odds, you win your first ever league title. Fighting against clubs with funds way above your means. A small squad, an unfancied manager and a striker that came from the lower leagues to fire you towards glory. This will all sound very familiar to Leicester City fans, and after an indifferent start to this term, last seasons' success might seem like a dream.

But don't moan in front of Montpellier HSC fans, the story above wasn't about the Foxes, but is the tale of the 2012 Ligue 1 champions.

Their stories are amazingly similar, in some ways Leicester's, against the big money, higher profile clubs of the Premier League is perhaps a greater achievement. However, pound-for-pound, la Paillade's success came from nowhere and no one can quite explain how or why it happened.

For Leicester City fans, be aware, there has been no happily-ever-after for the club from the south of France.

Down at the Stade de la Mosson, nothing much was happening. Relieved after finishing 14th in the table, saving their place in the top flight on the final day. They finished three points above the relegation zone, another season of struggles was heavily predicted.

The defensively minded coach joined the club in 2009 after moving up through the France youth ranks. He replaced Rolland Courbis, the man that had led MHSC from Ligue 2 to the top flight. They began the season at home to Auxerre. Winning 3-1 was a pleasant surprise, a good way to kick off the new campaign. 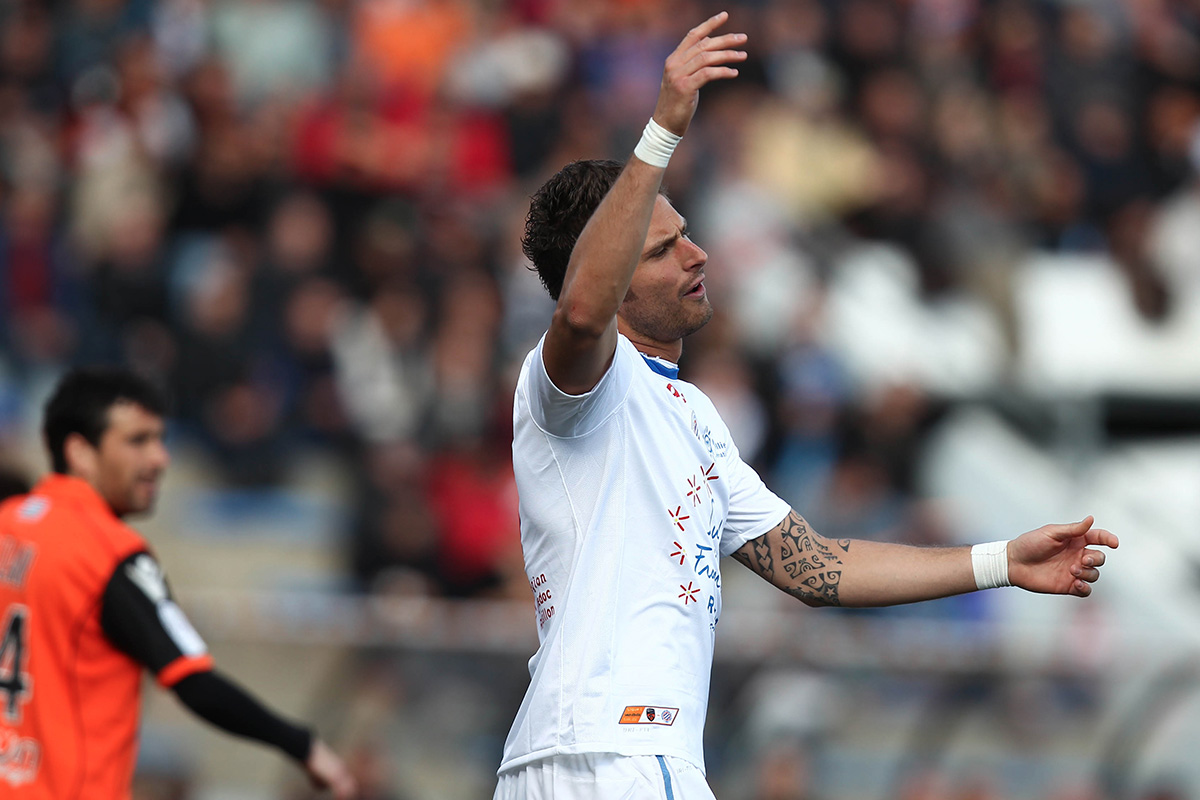 Olivier Giroud started up front, scoring the third in injury time. Younes Belhanda, the creative midfielder that President Louis Nicollin declared “had a [Eden] Hazard in each leg” grabbed his first of the season.

At first look, they gave the impression of being nothing more than a rag-tag group. A mixture of youth and experience, but with no real threat. They turned heads the following week, going to the home of the champions and beating Lille 1-0. Jamel Saihi was superb in the midfield, a real N'Golo Kante-esque performance. Giroud grabbed his second of the season in the 80th minute to snatch all three points.

After 10 weeks, Montpellier had won six games and sat three points behind PSG in the table. It was a nice story, but the might of the Parisians would surely pull away from Girard's team.

Losing 3-0 at home to the league leaders seemed to show the cracks in the side, but they rolled on. Every so often, like when they lost 1-0 away to Valenciennes, or 4-2 to Evian, you got the impression that the fairy-tale was over. Even the club's president was quick to distance himself from any title talk.

“Montpellier champions of France? If I was Marseille, Paris, Lyon, Lille or Rennes, I’d stab myself in the arse with a sausage! What an embarrassment it would be for them.” Nicollin told the delighted press.

PSG, disgusted by the fact they were top of the league at the end of 2011 sacked Bordeaux, Caen and Saint-Etienne followed. They came out of the Africa Cup of Nations period unscathed, despite losing a whole host of players and the title challenge was no longer just a pipe dream.

A 3-1 win over Marseille at the Stade Velodrome in Week 30 was a huge indicator that they were going to go the distance, but with two games to go they faced a huge test. With PSG playing Auxerre at home, Montpellier welcomed third-placed Lille to the Mosson. The home side had to match PSG's result to go into the final weekend three points clear.

The Parisians were 2-0 up at half-time and Lille knew that a win on the road would put them just two points off regaining their crown, the northerners pushed on. Then, in injury time, with the game goalless, Montpellier broke down the left. Giroud knew he didn't quite have the pace to add to his tally of 21 goals for the season, but he would set up Karim Ait-Fana to add his ninth assist. Squaring the ball across the goal, paying the striker too much attention, the Lille defence had left the Moroccan substitute unmarked and he tucked away the winner.

Queue some amazing scenes in the crowd. The title wasn't quite in their hands, but they had secured Champions League football. Despite protests from Auxerre fans on the final day, Montpellier, through a double from Nigerian forward John Utaka, won the game 2-1 and sealed their first-ever Ligue 1 title. 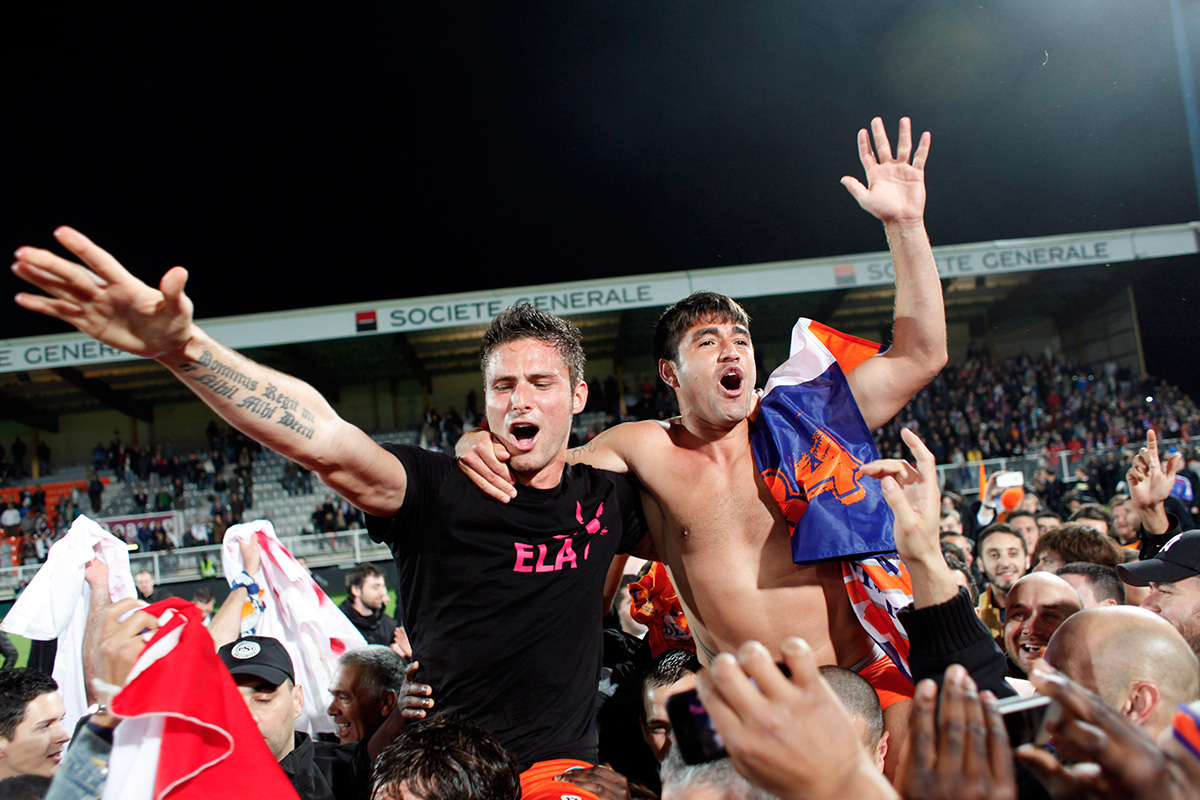 “It just goes to show that everyone can beat everyone and that money isn't the be-all and end-all,” Girard told the French press. “We're a club of mates, a club that brings young players through and gives them a chance.”

“At the end of the day, it's worked out well for us. We played some great football, with a well-balanced team and I'm overwhelmed.”

Similar to the off-the-cuff remark from Gary Lineker to present Match of the Day in his pants, Nicollin had promised to shave his hair and dye in blue and orange if Montpellier won the league – he duly obliged.

It brought the city together, the scenes of celebrations were amazing and unforgettable. However, as Leicester found out. With great success comes increased interest in the players that got you there.

Bedimo, Utaka and Belhanda followed their exit the following season, with signings from the previous summer also leaving. Losing Remy Cabella, Benjamin Stambouli and Garry Bocaly in the summer of 2014 took away the last the crucial title elements from the team. Girard had left for Lille in 2013, with the club currently on their fifth coach since his departure.

In the four seasons since they were crowned Champions, Montpellier have finished no higher than seventh, but as low as 15th. This year looks like another struggle, with MHSC only winning once in the first eight games.

2012 was a perfect storm. Girard only used 20 players from the start. He managed the whole campaign with Giroud as his only recognised striker. Claudio Ranieri is now going through a similar problem. Even losing just one of his prize assets has changed the way they play.

It's an impossible feat to match or even follow and Foxes fans may face a drop down from Cloud nine this term, however, just like Montpellier fans, you need to remember the good times and realise that your club is back to the level it probably belonged all along.