With Pepe on his way out of Real Madrid in the summer, Los Blancos are in the market for another centre back.

Speculation as to who could replace him has included Davinson Sánchez, Nicolás Otamendi and Marquinhos, as well as perhaps Jesús Vallejo returning from his loan spell with Eintracht Frankfurt.

But the latest defensive name to be linked with a move to the Estadio Santiago Bernabéu is Leonardo Bonucci.

According to Diario Gol, the Juventus man is on Real Madrid’s transfer wishlist for the summer, as president Florentino Pérez prepares to get his chequebook out despite what could potentially be a season which sees them win LaLiga and the Champions League.

It’s hard to not be a little sceptical when you see Bonucci linked with Real Madrid.

It may be a coincidence that Zinédine Zidane’s side are playing Juventus in the Champions League final next month and they are all of a sudden linked with one of their rival’s best players.

But it feels typical Madrid in a way, perhaps trying to unsettle a key opposition player ahead of a big game.

While it may not be exactly the same, there are parallels with the Theo Hernández situation.

It was only just before the Madrid derby when the talk of Real signing the Atleti left-back really started to heat up. 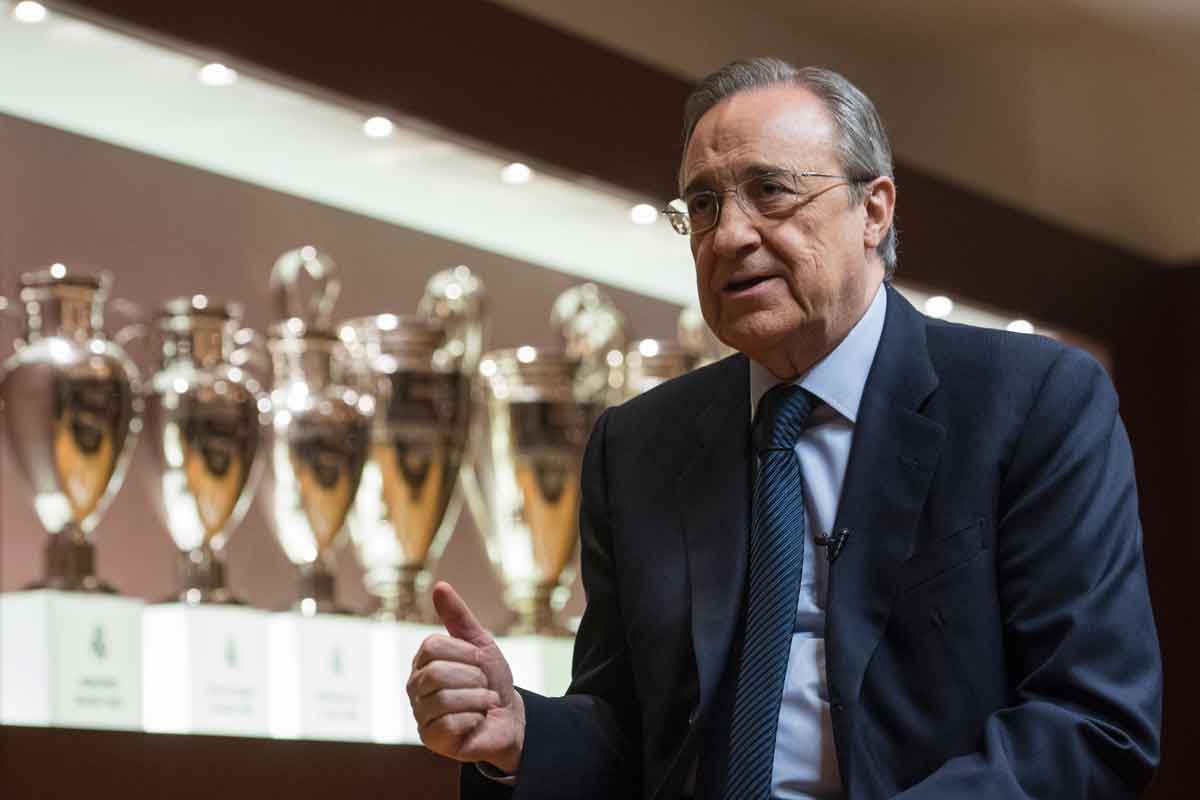 READ MORE: IS THIS REAL MADRID SIDE BETTER THAN THE GALÁCTICOS?

It has soured relations between the two clubs, with the move, which is set to go through after the Copa del Rey final according to Marca, breaking a pact the two clubs had to not go after the other one’s players.

And although the 19-year-old is currently on loan at Alavés, he is an Atlético Madrid player, with his brother Lucas Hernández part of the squad at the Estadio Vicente Calderón.

It felt like it was Real Madrid flexing their muscles, saying we’re the biggest club in the Spanish capital.

And the move, or at least speculation surrounding Bonucci feels similar, in terms of them saying to Juventus, we can go after your best players, even though you’re competing with us in the very top levels of European football.

How does Bonucci compare?

When most players are linked with a move to the Estadio Santiago Bernabéu, you find yourself asking if they are good enough to make the step up.

The 30-year-old has been part of a defence that has conceded just three Champions League goals on their way to the final.

That pretty much tells you all you need to know in terms of whether he can defend or not.

To reach the Champions League final, Real Madrid, by contrast, have only kept one clean sheet, conceding 17 goals.

But how does he look statistically compared to the defensive options Los Merengues have?

We compare his league statistics from this season to those of the players he would be lining up with – Sergio Ramos, Nacho and Raphaël Varane. 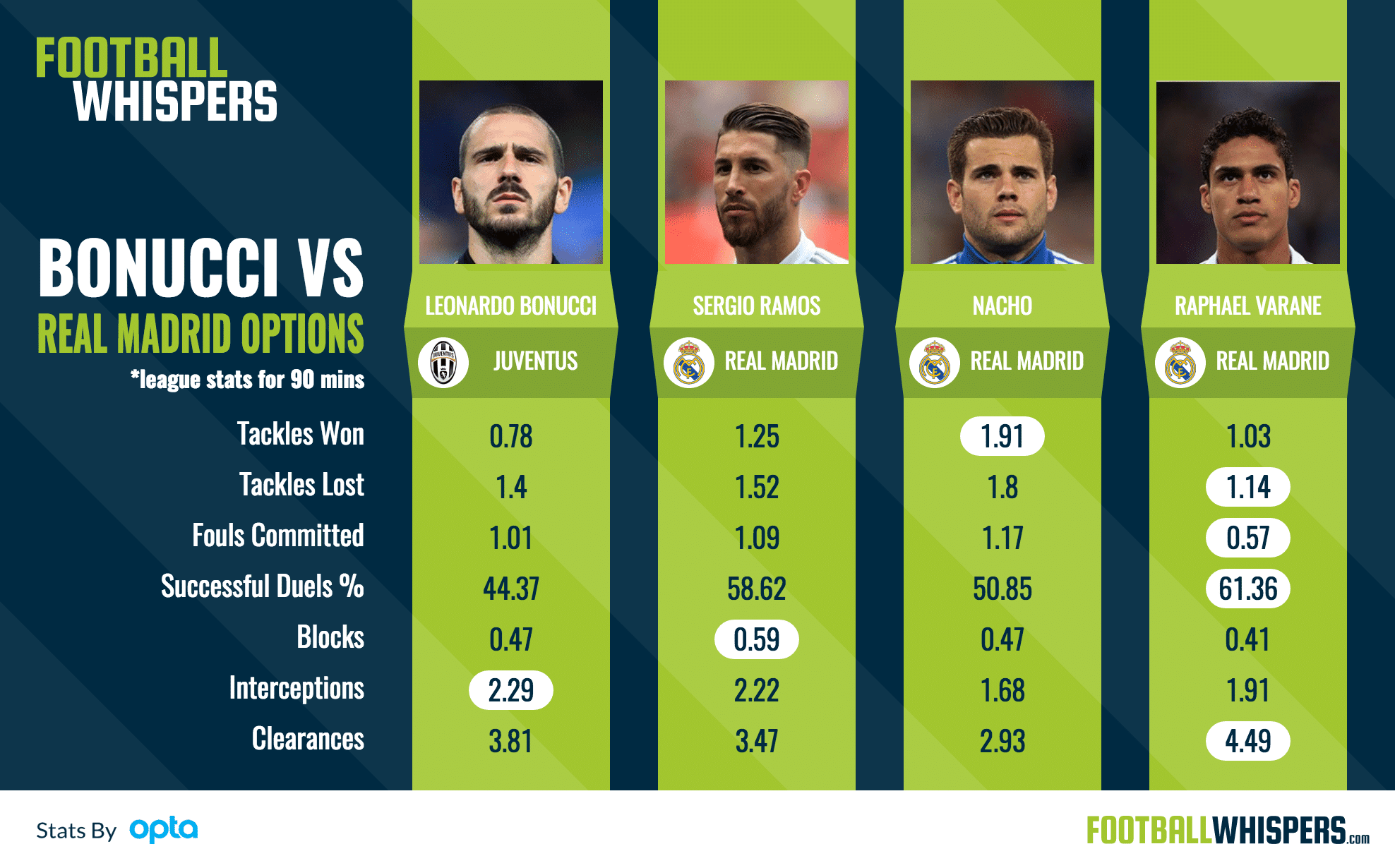 A slight disclaimer here – defensive stats are slightly hard to use because a tackle could be the result of something further up the pitch going wrong.

And it can be down to a different style of play.

They have all played a similar amount of games – Bonucci and Nacho have featured in 28, Ramos 26 and Varane 21.

Indeed the Italian actually loses more tackles per 90 minutes – 1.4 – than ones he wins.

In fact the Juventus man only concedes fewer fouls per 90 minutes than Varane when you compare the quartet.

He is actually the only one of the four players to win less than half of his duels too, being successful in just 44.37 per cent of his.

Once again, it is Varane who comes out on top, winning an impressive 61.36 per cent.

The Frenchman also makes the most clearances per 90 minutes – 4.49.

The Juventus man makes interceptions more frequently than the Real Madrid trio though – 2.29 per 90 minutes compared to 2.22 for Ramos, 1.91 for Varane and 1.68 for Nacho.

And finally in terms of blocks, it’s Madrid’s captain Ramos who makes the most per 90 minutes – 0.59.

Is a transfer realistic?

Would Juventus want to sell Bonucci?

The simple answer is no, but as with most clubs, everyone has a price.

He is thought to be a Manchester City target too, so that could drive up his asking fee, and it will surely be above the £38million bid Pep Guardiola’s side had rejected last year.

And the Daily Telegraph claims any fee for the 30-year-old would have to be around the £50million mark – a world-record fee for a defender.

That wouldn’t bother Madrid, who can buy whoever they want for what they want, but even they may think twice about spending so much money on a 30-year-old, even if he would definitely fit the galáctico mode that it feels Pérez is building once again at the Bernabéu.

And given that Nacho has impressed and Varane is still a very good prospect, with Vallejo possibly returning as a decent fourth-choice option, you would think Madrid didn’t need to spend that money.

But you look at the squad and you realise just how strong it is throughout – most of their backups would be starters elsewhere – and you think perhaps they would be willing to spend so much money to continue having arguably the best group of players in the world.

And with a backline of Dani Carvajal, Ramos, Bonucci and Marcelo, probably with David de Gea in goal, they would look very strong indeed.