If recent reports are to be believed, Leon Goretzka is a genuine Liverpool transfer target. With just six months remaining on his current deal with Schalke, the Bundesliga club might be best taking the phone off the hook for the foreseeable future.

Even before the Liverpool rumours, there was talk he would be heading to Bayern Munich next summer on a free transfer, but now speculation surrounding his future has intensified.

With the 22-year-old's future still up in the air, there are no guarantees he will extend his stay at the Veltins-Arena. Along with Liverpool, Manchester United and Juventus have also been mentioned as potential suitors.

As the Italian side make their move for Emre Can, trying to capitalise on his contract situation, Liverpool reportedly see Goretzka as a replacement for the former Bayer Leverkusen midfielder.

The ex-Bochum man has been linked with a move to join up with former Schalke teammate Joël Matip on Merseyside for some time.

Jürgen Klopp’s side are in the market for midfield reinforcements and it's easy to see why. Their lack of quality in middle of the park has been evident at times this season, and over recent months they've been linked with moves for Sergej Milinković-Savić and Rúben Neves.

The Champions League is where Liverpool's lack of squad depth has been exposed, with the Reds failing to win their opening two Group E games against Spartak Moscow and Sevilla.

Why A Move For Goretzka Makes Sense 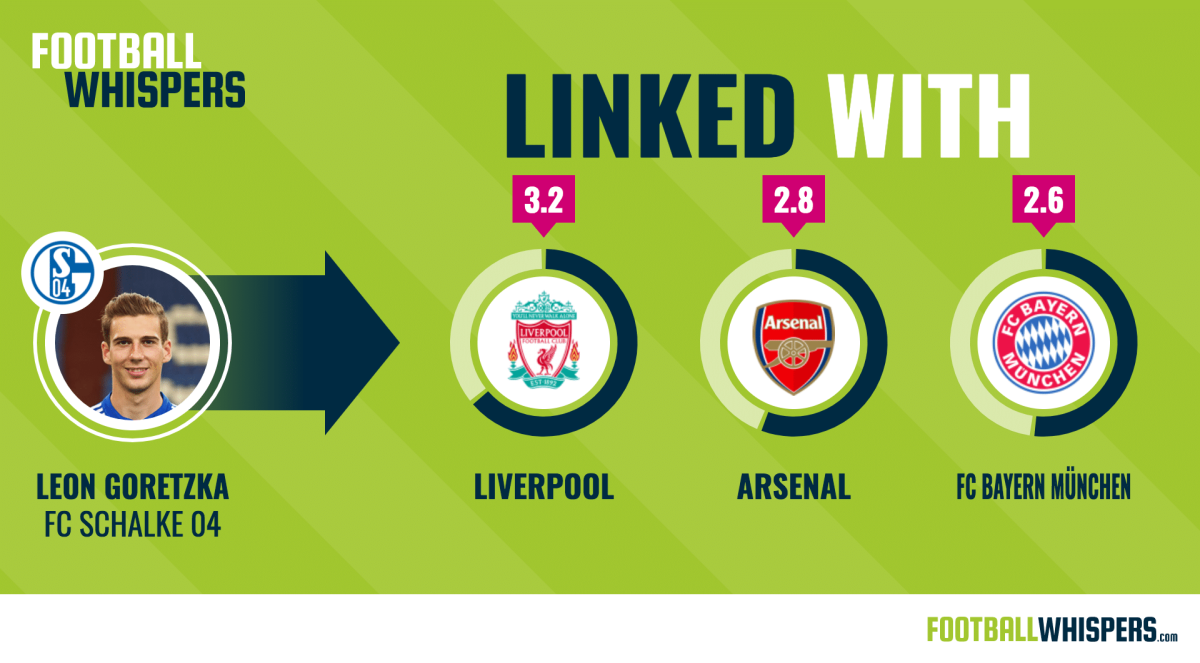 Just look at his player profile: Goretzka is young, he's got an abundance of potential to go alongside the quality he already possesses, he's versatile, he's German and, to an extent, he's undervalued.

If that doesn't sound like a Liverpool signing then I don't know what does.

With his contract set to expire in just a little over six months, it's unlikely he'd cost a fortune.

His wage demands aren't going to break the bank for the Reds either, with the midfielder reportedly pocketing £30,000 per week on his current deal.

He could see that figure comfortably doubled if he moved to Anfield with many of the current starting midfielders earning closer to £90,000 per week.

It's these sorts of situations that Liverpool should be capitalising on.

There's potential there for the club to grab themselves a bargain in a time when transfer fees are on the rise.

On paper, absolutely. What Goretzka brings to the team is something the Reds are often accused of not having: a proactive style of play.

Goreztka is aggressive and progressive when in possession. He carries the ball forward, takes opposition players out of the game with his direct style and looks to get his team onto the attack at any given opportunity.

The midfielder takes responsibility instead of passing it onto others, something many of the current crop of midfielders at Anfield could learn from.

Most importantly though, the 22-year-old is not reckless in doing so. Of course, there are areas in which he can improve and he's far from perfect. But if he was, would Liverpool even be in with a chance of signing him?

Last season he's scored eight goals in all competitions and added a further three assists. This season, he has already scored four league goals, while he starred for Germany in their World Cup qualifying win over Azerbaijan, scoring twice in a 5-1 win.

His five goals in the Bundesliga had him level with Emre Can and just one goal behind Georginio Wijnaldum in terms of league strikes. The former has more assists to his name than the Schalke man but he has appeared in more matches.

Goretzka averages 42 passes per 90 minutes which is, on average, five fewer than the starters in the Liverpool midfield, so he's not far away from the norm.

Where the Schalke man excels, though, is when looking at dribbles completed. Last season, he managed 1.2 per match and only Roberto Firmino (two), Philippe Coutinho (2.3) and Sadio Mané (2.5) can boast better numbers.

It emphasises the point that he's progressive, proactive and brave in possession, and this while playing a number of roles for the Bundesliga club this season — he's played in out wide, as a central midfielder and in an attacking midfield position.

The Reds are often accused of moving the ball side to side and it's all too easy for the opposition, but Goretzka commits men by attacking them. It creates openings and opportunities. 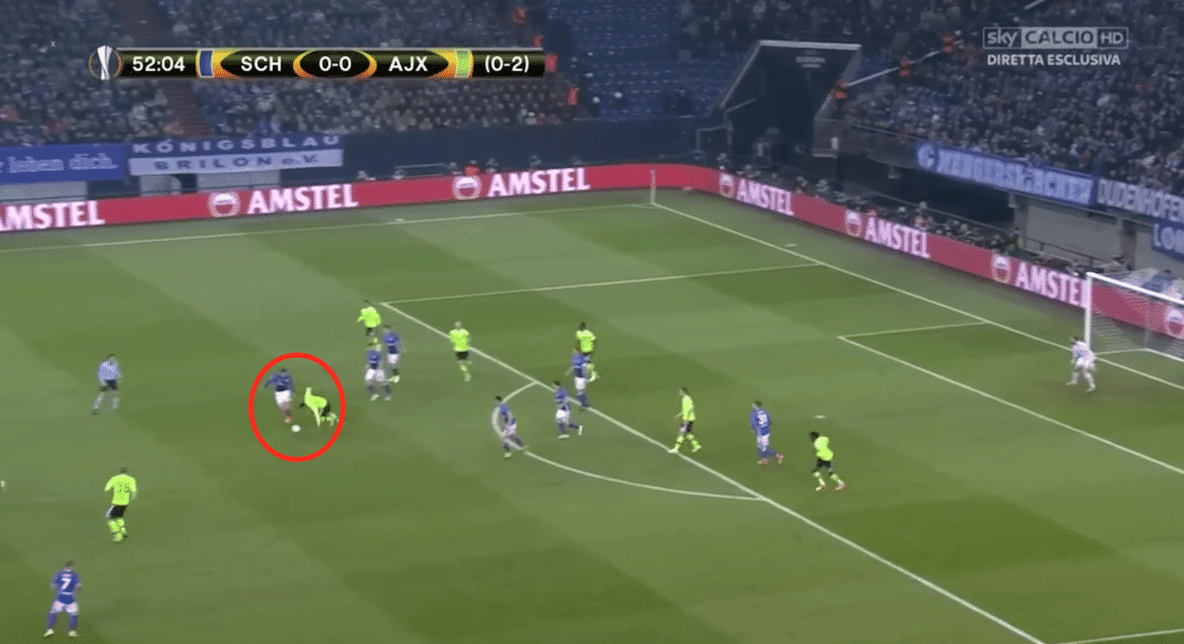 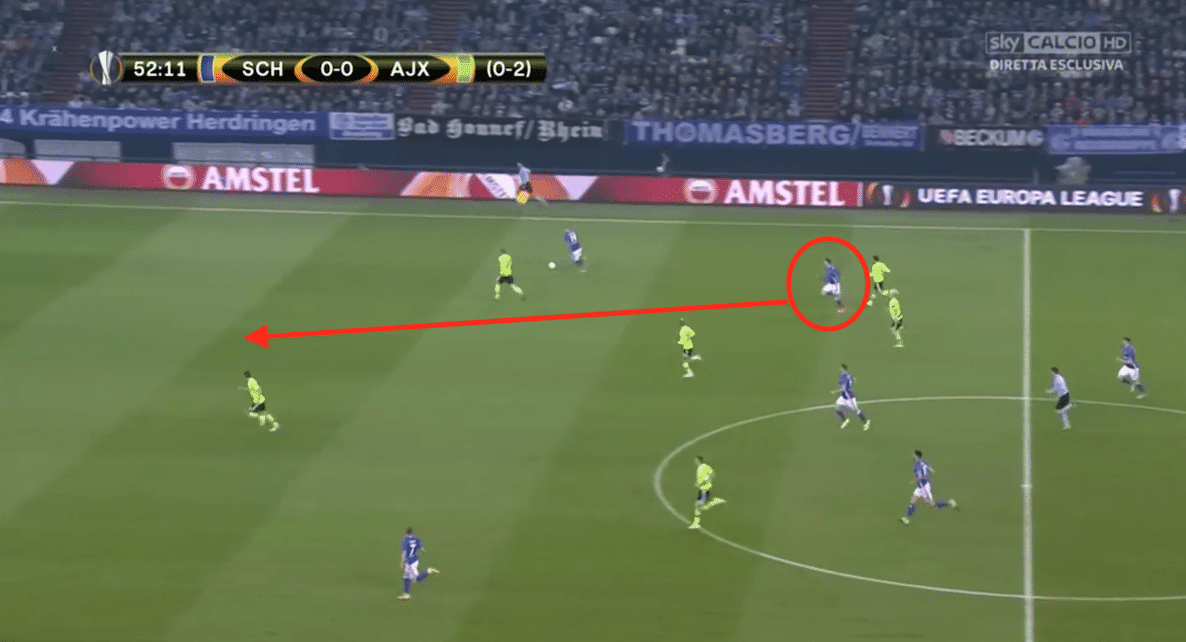 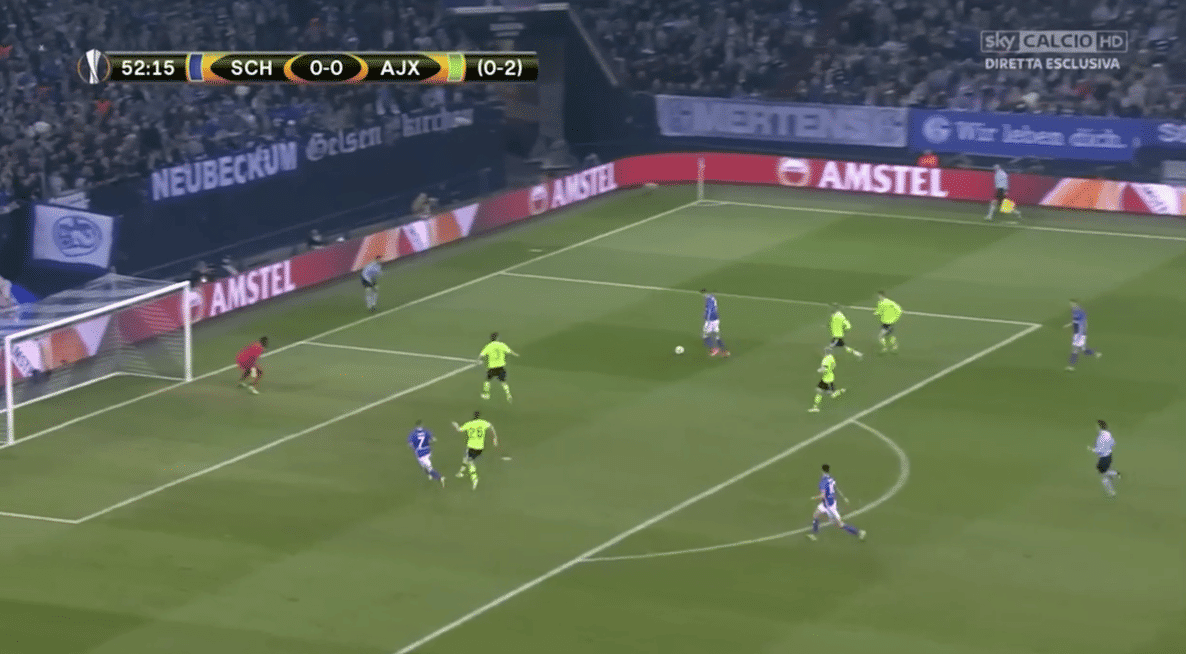 In the series of pictures above you see what Goretzka is all about as a player. He picks the ball up in the defensive third having tracked the Ajax man. His first thought is to drive into space ahead of him and he carries the ball forward into the opposition's half before playing a pass.

His job doesn't stop there. He then attacks the space and makes a run, highlighted by the red arrow, to blitz past the Ajax player before firing home from a difficult angle. He's not the quickest but he's a powerful runner, the sort opposition players hate to defend against. 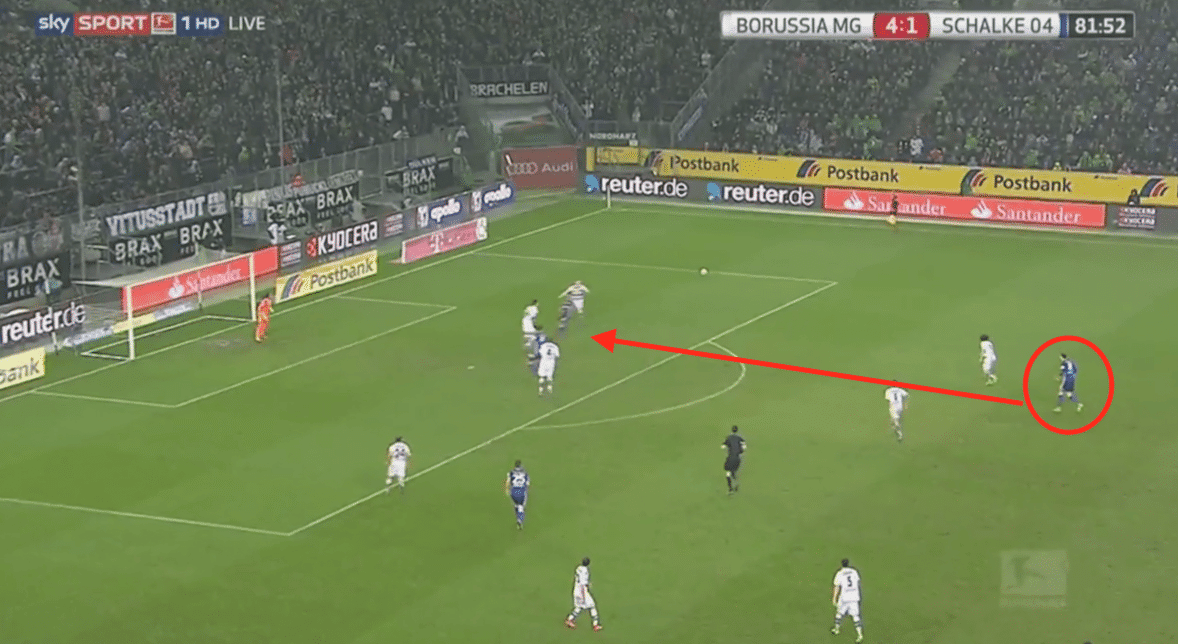 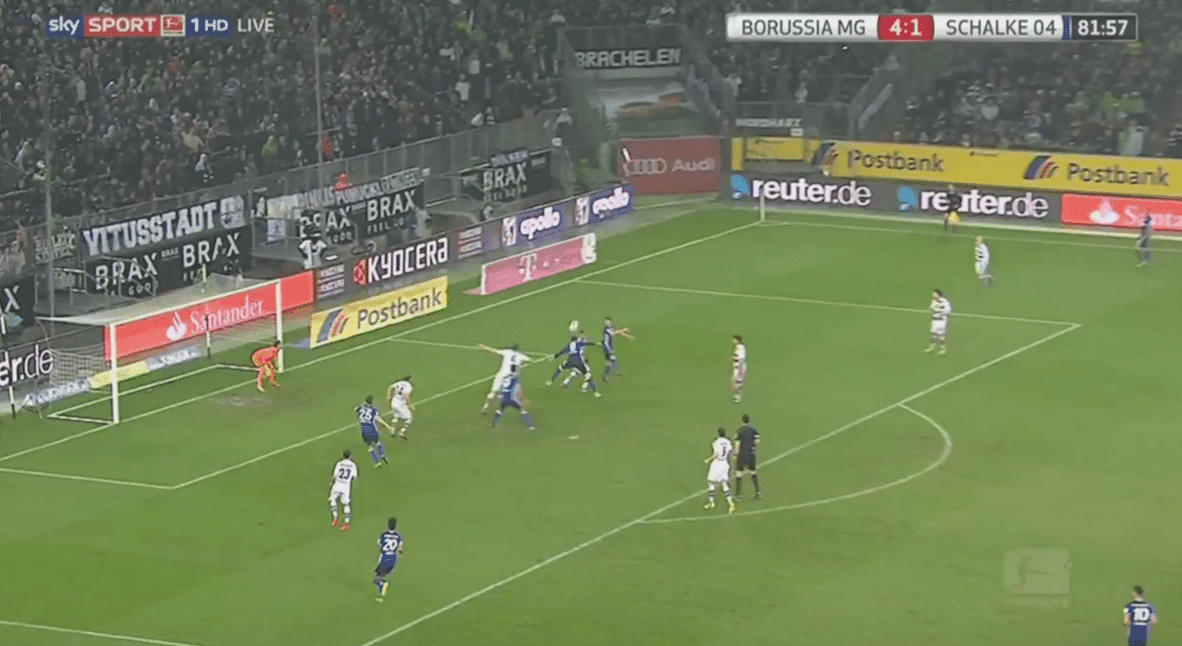 Looking at the two pictures above, it's not hard to figure out why he's been a regular on the scoresheet. The 22-year-old went on a scoring run and found the back of the net on four occasions in ten matches.

Here he holds his position until the ball is cleared to the channel and the Schalke man on the right picks up the loose ball. As soon as he looks as though he's going to get there first, Goretzka springs into action and makes a run into the area before emphatically heading the ball home.

He didn't need to make that run, the away side had bodies in the area already. But he does and he times it well. Wijnaldum has done that at times this season but has he done it often enough? 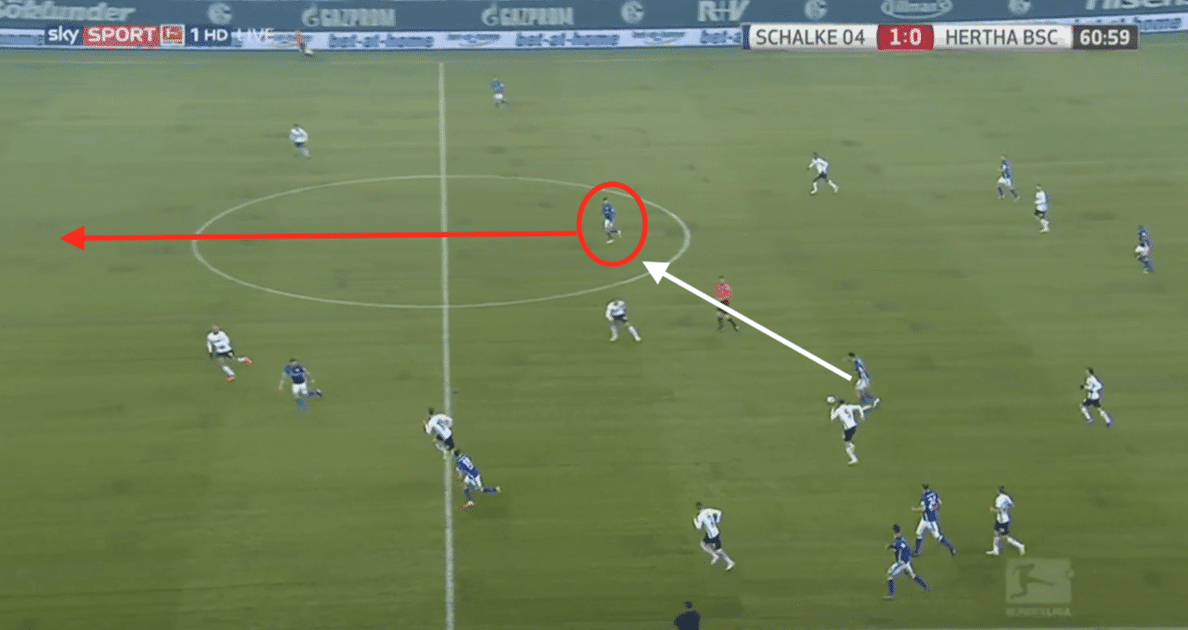 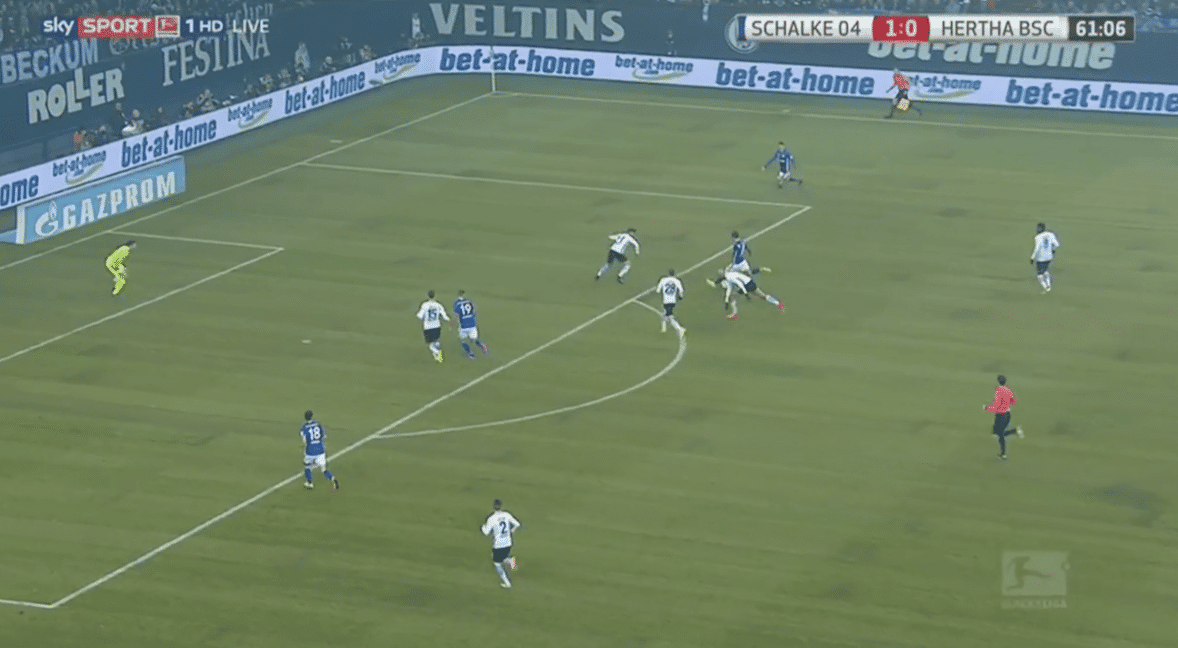 There's an argument to be made that Goretzka makes the wrong decision in the pictures above. In the first image, he's circled in red in a central area just before receiving the pass. In the second image, he's on the edge of the Hertha Berlin penalty area just about to let fly with a shot.

The Schalke man scores but had he missed there would have been questions asked regarding his decision making with Schalke having men over on both sides. However, the whole scenario is created by Goretkza's desire to attack the centre of the opposition's defence.

The fact he takes it upon himself should be applauded and welcomed, with many Liverpool fans losing their cool on several occasions this season when players have literally passed up the opportunity to take a shot; it's not cowardly but it does show lack of self-confidence.

Is A Move Likely?

He's obviously not Steven Gerrard but there are some similarities between Goretzka's game and that of the former Reds captain with the way he drives at and attacks the opposition.

Liverpool have lacked such a player — the pre-2010 Gerrard — for a while now and the German would be a welcome addition to the squad, with his intelligence, roving runs and touch in front of goal only likely to improve as he matures.

Klopp needs depth and, with the uncertainty surrounding Can's long-term future – with Juventus said to be weighing up a bid – pursuing Goretzka while his own future in Gelsenkirchen is up in the air would be the smart thing to do if Can ends up leaving.