Juventus outcast Mario Lemina is a player in demand. The 23-year-old midfielder has a queue of interested clubs vying for his signature and he looks set to leave Turin to kickstart his career.

The Daily Express claimed Everton and West Ham United are prepared to go to battle for his signature while Football.London believe Arsenal, Watford and Bayer Leverkusen are closely monitoring his situation.

It’s testament to his quality that, despite not being a first-team regular, he’s being courted by a host of Premier League teams. But, if he’s to develop into the player he could be, he may need to drop down a tier or two to get guaranteed football.

He’s been with the Serie A giants since the summer of 2015 yet has managed just 1,623 minutes of action in the Italian league – roughly 18 90-minute matches.

The departure of Paul Pogba to Manchester United last summer resulted in many believing Lemina would get more of an opportunity to showcase his talent at the heart of Juventus engine room. It didn’t.

Miralem Pjanić arrived from Roma and became the orchestrator of the Old Lady. Sami Khedira and Claudio Marchisio can’t go on forever, but Juventus are said to be interested in Liverpool’s midfield powerhouse Emre Can.

The German has just the 12 months remaining on his current deal and reports in Italy suggest Massimiliano Allegri is prepared to sanction a €30million deal for the 23-year-old. Such a move would see Lemina drop down the pecking order and shows those in charge don’t view him as a starter – not yet anyway.

Could this result in one of the interested clubs getting a bargain?

The 23-year-old has been strongly linked with a summer exit for a number of months now. All interested parties would unquestionably be able to offer him a large increase on his current contract, a deal that expires in 2020 and which is believed to pay him in the region of €24,000 per week.

However, more than money, Lemina would surely be looking for regular football if he were to leave the Bianconeri. He has made a paltry total of just 14 league starts since joining the club in August 2015, while seeing less than 1,100 minutes of action in all competitions this term.

Already behind Pjanić, Khedira and Marchisio, Allegri's move to a 4-2-3-1 formation in January and the acquisition of the more reliable and robust Rincón reduced his opportunities further still. Indeed, since the start of 2017, Lemina has just two starts to his name and cannot be blamed for he is looking at his options.

Yet none of that detracts from the fact that the Gabon international remains a highly talented prospect with the potential to develop into a very well-rounded and useful player.

Whenever he has been given space by Allegri, he has made the €10million Juventus paid to sign him outright from Olympique Marseille look like superb value for money.

According to , he has averaged 1.7 tackles and 1.3 interceptions per 90 minutes, also completing an impressive 63 per cent of take-ons he has attempted.

A high-energy midfielder who can thrive in either the trident of players behind Gonzalo Higuaín or in the double-pivot in front of the defence, Lemina is strong enough to hold off his marker and robust enough to make tough challenges whenever he is called upon to do so.

Perhaps the real weakness to his game is his distribution, although he seems fully aware of his limitations in this area. His completion rate has actually improved this term, connecting with 90.3% of his pass attempts, but so many of those are sideways or backwards and are almost always over short distances.

For example, In Juve’s draw away to Napoli Lemina failed to connect with only one pass in his 61 minutes of action, but only six of them actually went forward.

That is something that he can work on over time, though.

Where would Lemina fit? 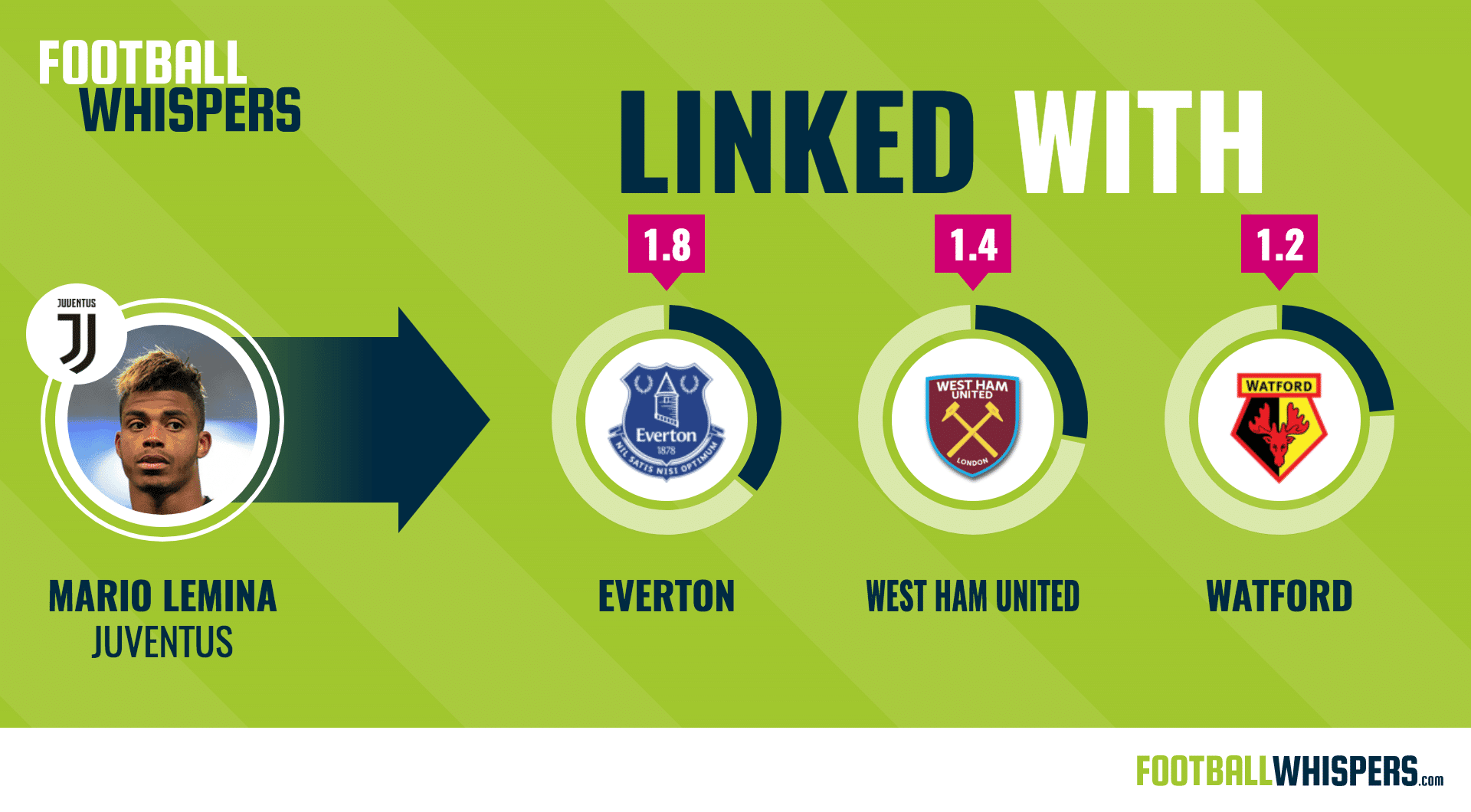 While Arsenal could no doubt make use of a presence in midfield like Lemina, the Gunners have more pressing issues. They're still yet to replace Santi Cazorla and the uncertainty surrounding the futures of Mesut Özil and Alexis Sánchez may mean the attacking reinforcements are needed – even after signing Alexandre Lacazette. A double pivot of Aaron Ramsey and Granit Xhaka will suffice for now.

Everton have an abundance of options in central midfield. They're able to choose from Idrissa Gueye, Morgan Schneiderlin, Tom Davies, Davy Klaassen and Gareth Barry. But you could see Ronald Koeman making room in his squad for a player of Lemina's undoubted ability. He'd not be a guaranteed starter but he would definitely see more first-team action than in Turin.

West Ham, perhaps, offer him the best opportunity of regular minutes. The Hammers have Cheikhou Kouyaté and Pedro Obiang but both are persistently linked with moves away and if either left it would leave a noticeable hole in the squad. Lemina fills that and then some.

Lemina's driving style would see him cause a lot of problems for opposing players. Though the Premier League is famed for its fast pace, very few teams seem to be able to cope with direct players. The Juventus man could have a lot of joy in England.

No matter where he ends up this summer, his next club can rest assured they have signed a hard-working and gifted player, one with experience of playing in a pressurised environment and emerging with telling victories when it matters.